First thing on Wednesday morning, my phone started to ring. Given the timing, I didn’t think the marina calling would be good news: a burst fender, frayed warp maybe… It was worse. Much worse: ‘There’s been a fire and your boat has been affected,’ the voice said. I know a fire on a boat is unlikely to have a salvageable outcome, but we hurried to the marina with thoughts of assessing the damage, recovering what we could and preparing for insurance company negotiations.

I mentally went through a list of what might have gone wrong on board, trying to think of any potential fire hazards or anything I might have missed in my usual leaving boat checks. For the life of me I couldn’t think of anything. My concerns were both for my boat and what further damage there might have been.

Nothing could have prepared us for the scene when we arrived – the fire brigade were packing up their hoses, there was a putrid smell of burnt oil, fuel and resin in the air and a few small blackened items of debris were floating on the oily water. 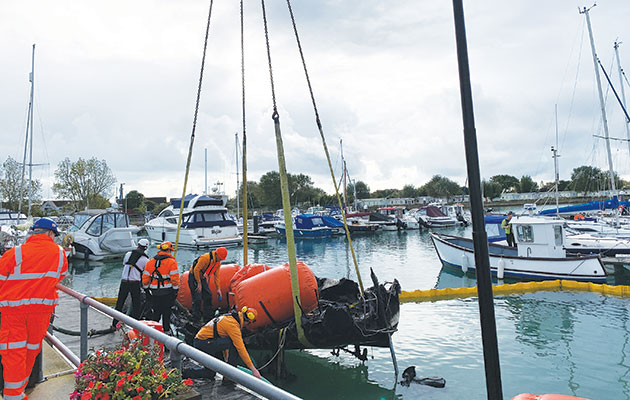 We searched anxiously for a first sight of Tern on her berth but the bay appeared empty, neither Tern nor the neighbouring boat were there. Maybe they had been moved, I hoped in vain, but as we approached the berth, reality struck, as I recognised the top of Tern’s mast sticking out from the murky water, the wind direction indicator still fluttering in the breeze.

The post A putrid smell of burnt oil, fuel and resin filled the air – a learning curve appeared first on Yachting Monthly.