Cruising on the notoriously rocky yet stunningly beautiful north Welsh coast is not exactly the most ideal starting place for a young, naive couple, who’ve watched too many YouTube videos, to learn some lessons from the sea.

We’d bought an old 28ft 1967 Colvic Sea Rover named Good Tidings, an overly fibre-glassed tank of a boat that makes up for its sluggishness with oodles of space.

We had the boat in the marina at Pwllheli for about a month, enough time to get to grips with her and learn the basics of sailing, or so we thought…

We had made good progress along the coast for two ‘zero beginners’. 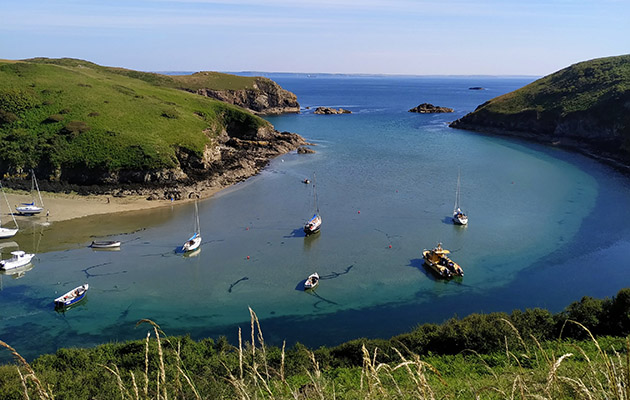 The inner harbour at Solva. With a strong wind and limited water, there’s little room for error

We enjoyed the beautiful Cardigan Bay, with it’s stunning backdrop of Snowdonia National Park, had pleasant sails to the beautiful towns of Barmouth, New Quay, Fishguard, and even navigated the fearsome Ramsey Sound with its aptly named hazardous rocks The Bitches.

You’d have thought if we were going to be taught a harsh lesson from the sea, it might’ve been here.

Instead, it was the picturesque, crystal clear waters of the outer ‘waiting pool’ of Solva.

We had arrived at Solva after shooting through Ramsey Sound on the spring tide.

The wind was blowing at about 15 knots, gusting 20.

Luckily with the tide through the sound, there weren’t any of those famous standing waves.

Good Tidings had never sailed so beautifully than after rounding the headland to Solva with the wind filling her sails from the land.

We entered the waiting pool through the narrow, rocky entrance.

There wasn’t enough water in the inner harbour to pick up the fore and aft mooring so we anchored in the pool, about a metre or so deep at low tide, Good Tidings brushing the sandy bottom with her bilge keels a few times.

A litany of errors

Now for the first of the long list of silly mistakes.

We anchored up using just 6m of chain, any more and we felt we would have drifted too close to the perilous rocks behind us.

With the wind blowing from the north (not the best place for this pool according to our pilot book, due to the wind funnelling down the small valley ahead of us) we were swinging around a fair bit, with the chain snatching at our bowsprit.

I had never even heard of an anchor snubber at this point, so it was uncomfortable, but I was keeping an eye on it.

A gentleman in a little yacht that couldn’t have been more than 18ft had come into the pool and anchored up next to us. 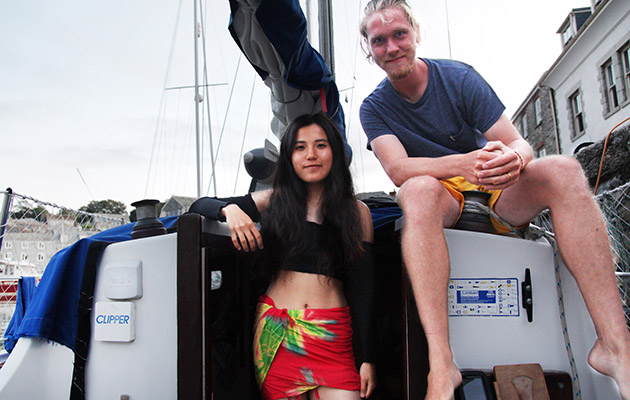 Mark Farnworth, 28, from Preston, England quit his job at an English school in China to buy and live aboard his 1967 Colvic Sea Rover with his wife, Nadiyana. Despite not having any sailing experience, they cruised from North Wales to Paris. Follow their adventure on their You Tube channel Wildlings Sailing

He duly began swinging around on his anchor rope in the same way as ourselves.

The tide was starting to flood in. I was tired after a night of dreading Ramsey Sound, and so, took my eye off the ball and went inside for a little rest.

This was the second mistake.

An hour or so later, I heard a shout ‘Oi!’ coming from the other boat outside. I jumped up to see what was happening, ran to the bow and saw that the depth had changed from 1m to at least 4m!

Our little bruce anchor was slipping and that northerly wind was blowing Good Tidings to her doom.

I quickly let out more chain and the anchor re-set itself, though we had drifted so far that the sea bottom under the stern of the boat had changed from soft, forgiving sand to rock and kelp.

If we let out more chain, I believed we would have hit the rocks, if we didn’t we would drag anchor even more.

Now for the third mistake.

In my haste I shouted to my wife, Nadiyana, to switch the engine on. 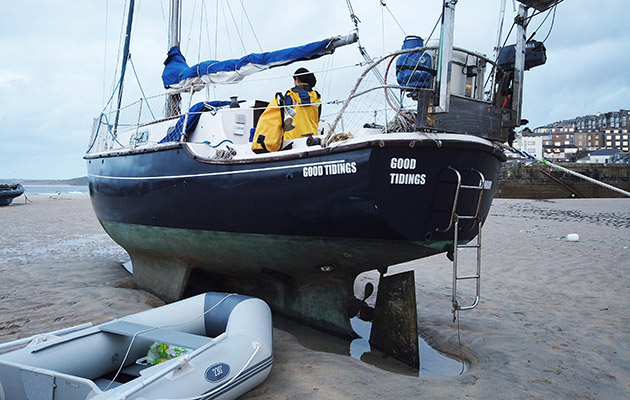 The engine started immediately, as it always does, but we were forgetting one thing. We hadn’t turned the fuel on.

We realised this just as the engine spluttered and conked out. Panic resumed.

We got a call on Channel 16 from our helpful fellow sailor anchored in the pool, and went to Channel 8.

He seemed almost angry at us.

We were displaying some rank amateur anchoring and generally pathetic nautical skills and we definitely deserved a good blasting.

He radioed, ‘you need to anchor with at least five times the maximum depth of water in length of chain!’, but we had no power, no way of getting off these rocks and weren’t in the mood for our much-needed lecture.

Rewind a month or so, Nadiyana and I are in Pwllheli marina, about to go out for a sail.

I started the engine, it idled for about 10 minutes and just as we were about to push off from the pontoon, it conked out.

I had done the exact same thing – I’d left the fuel line closed.

I spent an hour trying to bleed the engine with the lift pump, no joy.

It wasn’t strong enough to get fuel up to the injectors.

The tank was at least 3/4 full so I expected there to be enough gravitational force to help the fuel through, but it wasn’t enough, the tanks needed to be full.

I filled up the tank and finally got the fuel to the first bleed screw.

I pumped it a few times to get the fuel to the injectors.

My Dad, who’s expertise lies in classic American cars, or anything with an engine for that matter, was there to assist me and he suggested ‘cracking’ the nuts on the injector and turning the engine over to force the air (and some fuel) out. 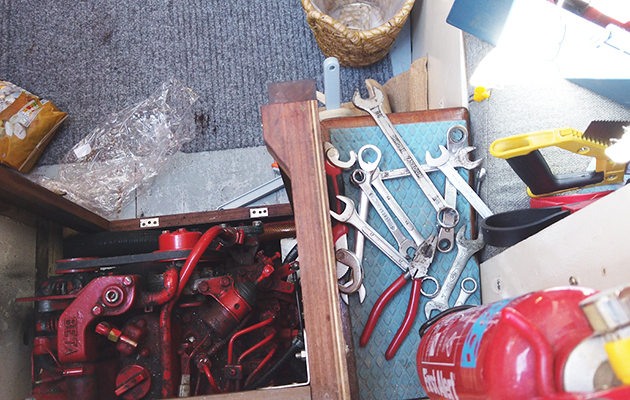 Thanks to some fatherly advice, Mark managed to revive the engine

We did just that and after a few engine turns for each of the three injector nuts, pure fuel came out with no air bubbles.

We tightened the nuts and the Beta was purring again.

Of course, when Dad is there it all goes swimmingly. He has the Midas touch when it comes to engines.

I, on the other hand, am a haphazard corner cutter, for which there is no place on any boat, except my own.

The tank was about half full and we only had about 5 litres in our reserve can.

I put the remaining 5 litres in, prayed for some fuel to come out of the first bleed screw when I used the manual lift pump. Nothing, of course.

I cracked the injector nuts and turned the engine over, I must have been a little premature in tightening the nuts back up, not all the air had escaped the system because when I started the engine it cut out seconds after, but at least some of the fuel was getting to the system.

After a few more attempts and shouts of frustration I could get the engine to 2000rpm without it cutting out.

I left Nadiyana to motor away from the rocks while I pulled up the anchor.

We motored on to our fore and aft mooring before letting the adrenaline settle down, taking a moment to discuss how stupid and careless we had been, and how if it wasn’t for that fella in the little sailing boat shouting ‘Oi!’, our boat and dreams of life aboard it would have been toast.

We learned a lot in those few hours.

The most important being to use more anchor chain, now we use as much as possible, even if it’s well over the recommended amount.

Mishaps happen when you’re least expecting it, anyone would have put their money on something going wrong in Ramsey Sound, not the placid shallow pool of Solva.

Tiredness and fatigue will get you before any big wave will.

We often look back and wonder, ‘why on earth did we close the fuel and raw water sea-cock every time we switched off the engine?’

By buying a boat and learning to sail on that boat, we were bound to find ourselves in these easily preventable situations.

Since this occasion we have made silly mistakes, but they are becoming fewer and farther between.

We are still here floating on Good Tidings, still in one piece and loving every minute of it.

The post ‘As the engine spluttered and conked out, panic resumed’ appeared first on Yachting Monthly.