Taking a boat close inshore is something most sailors try to avoid, but former Royal Marine Henry Chamberlain has made this age-old craft his business, opening up another world rarely seen by those ashore or afloat.

The Coastal Exploration Company uses traditional Norfolk sailing boats to take clients away from the everyday when ashore and immerse them in a tidal landscape few see on the Norfolk coast.

Day sailing and overnight camping under boom tents are all part of what Henry offers.

Recently, he opened up a 50-year-old route to deliver beer – proving, quite literally, a thirst for a long forgotten craft.

The idea of creek crawling is to navigate using a mix of land-and sea-based navigation techniques. 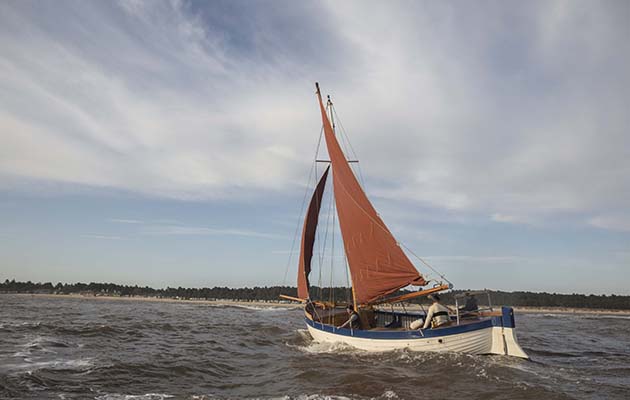 One of Henry’s larger boats, My Girls, under sail. Credit: Coastal Exploration Company

It’s a strangely appealing prospect, far separated from the madding crowd, but one that demands getting wet and muddy.

I joined Henry in Wells-next-the-Sea on the North Norfolk coast before the sailing season begins on a bitterly cold day in March.

My aim is to discover how he opens up channels beyond the buoyage; first exploring on foot and later by sea.

The motto of the Royal Marines is unsurprisingly straightforward: Per Mare, Per Tarem – By Sea, By Land.

There’s no mention of the mud, but there’s plenty of it.

Tools of the trade

With a tidal range of up to 5m, this windswept and ever-changing landscape quickly becomes a seascape.

‘Exploring tidal creeks has its own challenges and that’s a big part of the appeal,’ says Henry. ‘The pleasure is seeing how far you can safely get, so you are prepared to run aground in soft mud.

‘The type of boat you have will strongly dictate what’s possible.’

Of these, Henry says, their mussel flat is the most versatile craft for the task at hand.

‘You can sail, skull and punt her, whereas you wouldn’t want to take a modern yacht creek crawling unless she can comfortably dry out. You can always do this kind of exploring in a tender if your yacht isn’t built for it,’ adds Henry. 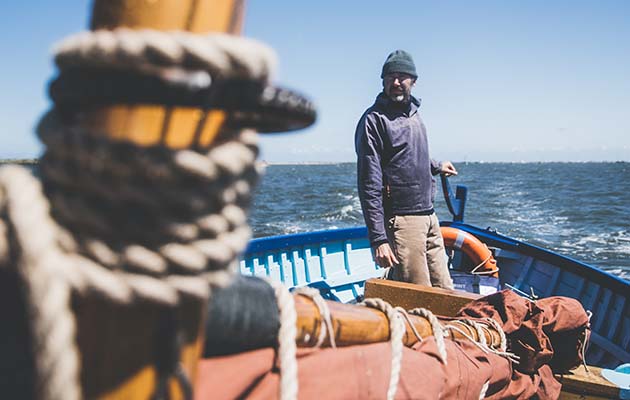 Some of Henry’s trips take him out in open water, but never far from land. Credit: Coastal Exploration Company

Any tidal creek excursion demands more research than you might be used to, using several different sources of information, some not normally associated with sailing.

‘We’re exploring the land and the sea, so it makes sense for us to use both nautical charts and Ordnance Survey [OS] maps.

‘Put the two together and they start to build a much richer picture of what’s out there,’ explains Henry.

‘As you start looking for channels on foot, the OS map can be a big help finding safe points of access and exit further down the coastline.’

He points out some high ground that would prove useful if we need to get off the water urgently.

Google Earth satellite imagery adds another layer of useful information about the channels.

On the charters he runs, Henry also gives clients an ‘escape and evasion’ map printed on fabric similar to those given to fighter pilots in case they were downed in enemy territory.

In the tidal creeks Henry explores, there is no buoyage, so at the beginning of the season he marks out his intended passage with his more traditional form of indicator: willow withies.

We wade out through the falling tide, past yachts settled into the mud on mooring buoys, soon finding ourselves in a no-man’s land between the coastal town of Wells-next- the-Sea and a brooding sky over the North Sea a few miles out.

It’s an exercise best done at low tide, making it easier to spot and visualise the deepest channels.

Henry moves carefully with his bundle of withies, being careful not to disturb the wildlife. 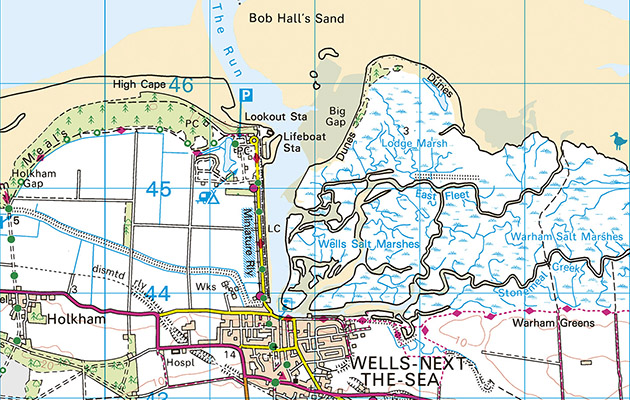 Using an OS map and a chart will give a more complete picture of the landscape. Credit: OS

The withies work well as channel markers, he explains: ‘They stick out well on the horizon, and are strong enough to bed into the mud, though occasionally one or two are lost to a keen dog. They’re also much less intrusive than traditional buoyage.’

Whilst some bigger channels don’t alter much, smaller ones differ every year; part of the reason they are not buoyed in the first place.

‘When you’re back in the boat you will want to pass through the deepest bit of water you can find, so your channel markers need to be roughly equal either side of this,’ says Henry.

‘If you’ve walked it, you’re able to visualise that route when you’re returning on the water with your pilotage plan.’

Whilst GPS could be used as a back-up throughout this process, the value of old-fashioned familiarisation with the landscape and taking time to absorb it is clear.

Landmarks from the OS map, transits with obvious marks on land, such as church spires, and any other fixed objects can also prove useful tools to confirm position once the water level rises.

Henry considers the placement of each withy carefully as he can only carry a bundle of 10 at a time.

It’s a physical task; checking the channel thoroughly involves crossing it repeatedly as it curves to mark both sides.

As we make our way to the opposite bank, the fast flowing water in the middle of the channel is shallow but still deep enough to flood my boots, filling them with silty water.

When I reach the other side – using a withy as a walking stick – my boots squelch into glutinous mud and I get stuck. 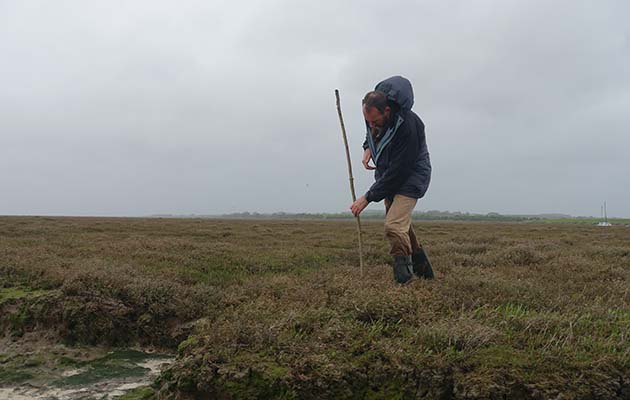 Henry, on the other hand, strides with purpose gained from years of practice.

Eventually we reach the point where the first withy is to be placed.

Henry places it firmly far enough from the bank to give a good margin for error when the channel is sailed through.

In a few hours the water would be well above our heads. 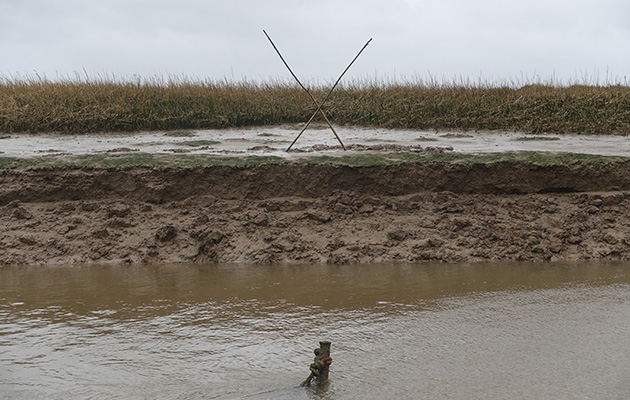 Obstacles in the channel are marked with two crossed withies. Credit: Will Bruton

It’s a potentially dangerous place to be on foot for someone not familiar with the area.

‘You need to mark hazards in the channel too,’ explains Henry.

We come across a wheelbarrow-sized lump of iron protruding a metre above the mud.

Its sharp edges could cause significant damage were it to hit a wooden hull. Henry’s familiar with this one, and has already marked it with a cross of two withies on the nearside bank. 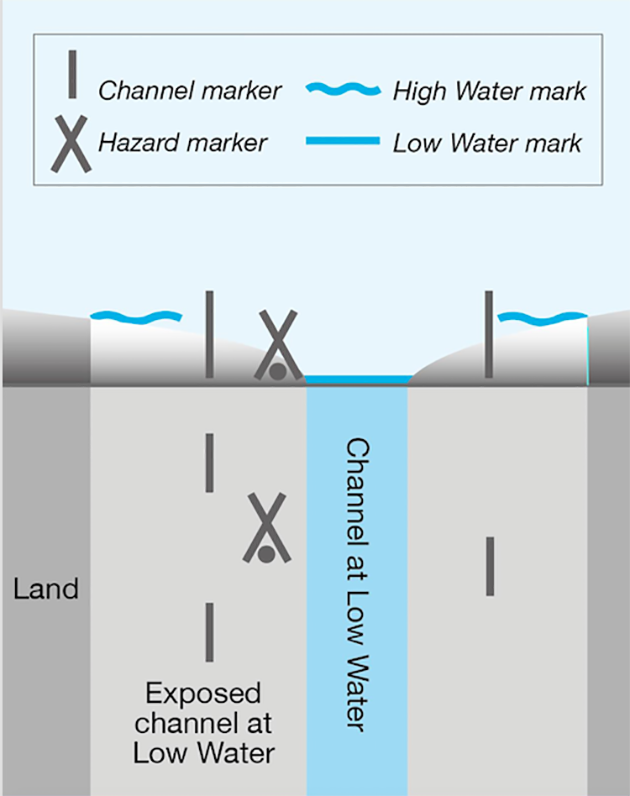 We mark the channel either side until it widens significantly.

The markers are surprisingly visible.

As we move further out to sea from marsh to sand, the withies become less reliable, refusing to stick into the mud.

From here onwards, sailors need to make use of the limited normal buoyage.

‘Look out for sandbars you might encounter whilst you’re still on foot,’ says Henry. ‘The advantage of this whole process is that you’re unusually well informed by the time you get out on the water.’

After two wet and muddy hours we’ve marked a significant meander in the tidal landscape off Wells-next-the-Sea.

Henry will repeat this task several times over the coming weeks until his routes for the summer are all marked out.

On some he’ll deliberately run the boat aground, let the tide fall, and make a camp for the night under a boom-tent with guests.

On others, he’ll simply use as a shortcut.

With a Force 7-8 blowing, today is not one for sailing, but I look forward to coming back in fairer weather.

Henry’s offer to ‘reconnect with nature’ is so much more than sailing; it’s about being familiar with the landscapes we sail out of, and going where few do, on our own terms – something, until now, I only associated with the offshore and extreme.

The post Beyond the buoyage: exploring tidal creeks appeared first on Yachting Monthly.