On 12 December, Natasha Lambert realised an ambition six years in the making. Back in 2014, Natasha, then 17, met her hero, Ellen MacArthur, and set her heart on ocean sailing.

As a young woman with quadriplegic cerebral palsy, the difficulties she faced were colossal, but she and her family and crew sailed into St Lucia in their Nautitech 46 Open cat, Blown Away, after 18 days at sea.

On arriving in St Lucia Natasha said that it was: “An amazing trip, loved it – didn’t want to stop but it’s great to be here!”

The Lamberts had taken part in the ARC transatlantic rally from Gran Canaria to St Lucia. From choosing a suitable boat for Natasha to modifying and adapting it so that she can control the wheel and trim the sails with helmet controls, it has been a huge undertaking – 2020’s pandemic was but one layer of difficulty.

We met the family on board their boat in Las Palmas, and Natasha’s mum Amanda answered questions on behalf of Natasha as the special communication computer Natasha uses had been smashed going through airport security and she was waiting for a replacement to arrive.

Natasha was introduced to sailing at the age of nine, and was immediately captivated by it. She suffers from involuntary movements so can’t always co-ordinate her limbs, but had always been able to drink from a straw and make sip and puff movements, so dad Gary had the idea of using this to activate switches to control the helm and sails on a custom-adapted vessel.

They started experimenting with model boats before buying bought a 21ft Mini 6.50, Miss Isle, which Gary adapted and Natasha sailed round the Isle of Wight in 2012. In 2014, she sailed to Wales and walked up Pen Y Fan mountain using her special Hart Walker. 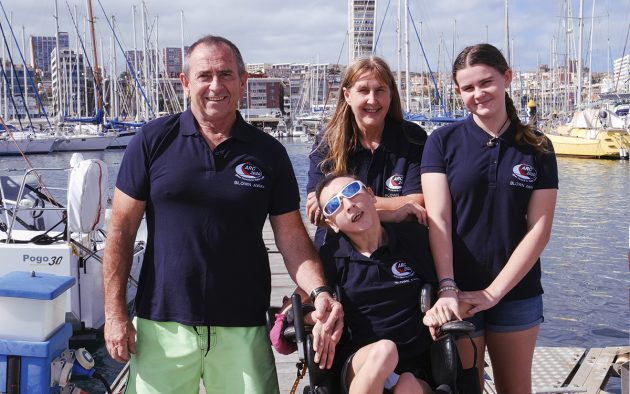 Since then she has sailed and climbed mountains in Scotland and Ireland, using these unimaginably hard physical tests to raise money for charities to help other young people with disabilities or recovering from cancer.

Desire for an ocean crossing

After meeting Ellen MacArthur, Natasha set her heart on sailing across the Atlantic.
“Gary and I were not convinced at that stage. We thought it was a nice idea but a pipe dream,” says Amanda. “But then we spoke to lots of people and they said that with the right boat and support it could be possible.”

The Lamberts began looking at yachts that could be adapted and that were both accessible and affordable. A catamaran was an obvious choice, and the family chartered in Croatia to see if it was an experience they would enjoy and could manage. 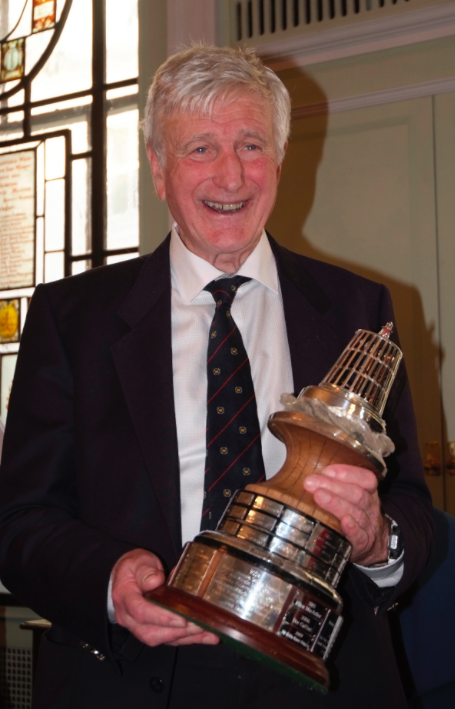 Recognition for one the most remarkable voyagers of our times, a modern day Bill Tilman 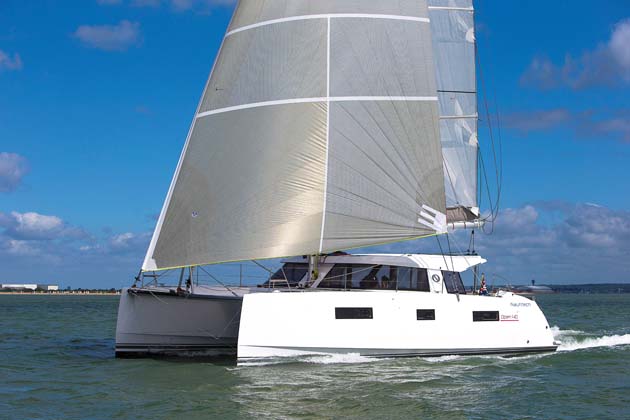 Space, stability, performance and even safety, if you’re a monohull sailor you will be familiar with the key points of…

“There were no companies that offered any adapted boats and eventually we rented a Lagoon. It was not ideal and a struggle, but we all loved it and after the week we thought maybe it was a possibility and started looking at how we could finance it,” says Amanda.

The decision to buy a boat had to be Natasha’s, and she was insistent. The money came from a compensation award she received for her birth injury, but Amanda says: “We have to make sure that her finances will last all her life, and we have to conserve that.”

The Lamberts settled on the Nautitech 46 Open, large enough for the family to sail with the extra help they’d need (they did the ARC with a crew of eight, including two carers and a friend who is a Yachtmaster instructor/examiner).

It fell to Gary to design and build a system for the Nautitech that could be operated by sip and puff controls. He created the computer control system using open source software.

It is activated by controls on Natasha’s helmet, which plugs in at the helm stations. Natasha holds a plastic tube in her mouth and when she puffs the wheel is turned to turn to port, and to starboard when she sips. 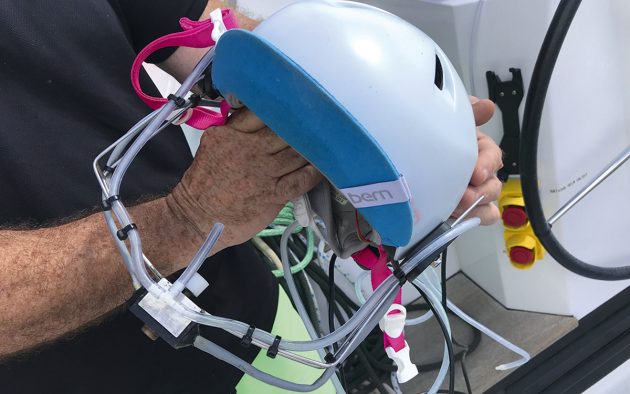 Sip and puff controls on Natasha’s helmet: she controls the boat by puffing or sipping on the plastic tube. A switch on the chinguard changes modes from helm to sails.. Photo: James Mitchell

Natasha also has a plastic button mounted on her helmet chin guard which she can push with her tongue. This changes modes from operating the wheel to operating the mainsheet winch and traveller flatwinder, either trimming in or paying out the sail.

Beneath the button is a brass shaft. When depressed, it blocks the light passing between an LED on one side and a light-dependent resistor — in effect, it is a light shutter that operates a switch. When Natasha changes modes, a puff eases the sail out, while a sip trims in.

As Natasha cannot easily see the mainsail angle from the helming seats, she matches up LED lights on a display above the wheel. A top arc of LEDs indicates where the boom is, while the bottom LEDs indicate where the computer recommends the boom to be. This can also be done automatically. If the boom is within a 7° arc of the centreline, Natasha’s sip and puff tube operates the flatwinder to move the traveller up and down. Past that point, the system instead activates a Harken rewind winch, which eases or winds in the mainsheet. 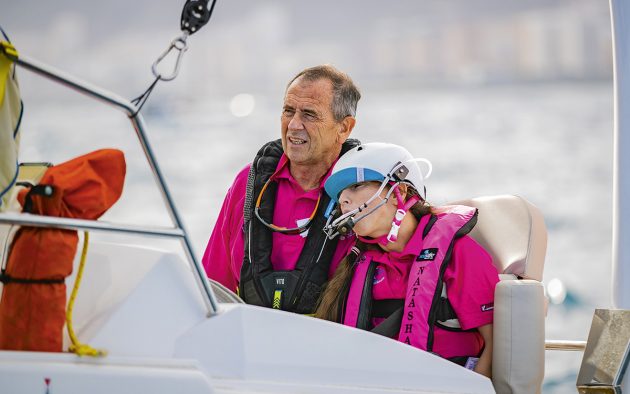 Natasha Lambert controlling the boat via sip and puff technology mounted on her helmet and linked to a computer. Photo: James Mitchell

If she wants to operate the pit winches to trim the headsail, someone else has to activate a manual switch, however. “What I didn’t want to do is have a massive menu for Tash to have to scroll down,” explains Gary. “I wanted it as rapid and as easy as it could be for her to sail the boat and as straightforward and fun as I could.”

Inside Blown Away, some small adaptations have also been made to make it easier for Natasha to live on board. For example, tracks are fixed to the deckhead and under the cockpit hardtop so that Natasha can be moved safely around in a hoist. She sleeps in the port hull, which has the owner’s cabin configuration, with a double bed and heads/shower. She is carried up and down into this. In the saloon, a seating area to port doubles up as a day bed or standby berth.

The table in the cockpit can be removed so that Natasha can use her Hart Walker on a treadmill. The hands-free exoskeleton device allows her to walk and exercise while on board. It is normally connected to four wheels and she has used it to walk up mountains. 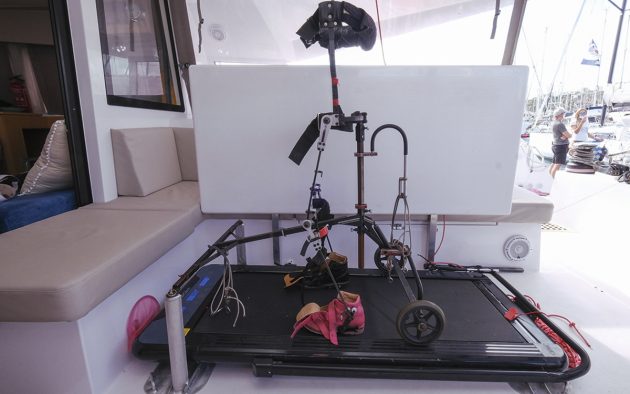 A special Hart Walker mobility device is fitted to a treadmill so that Natasha can exercise while on board. Photo: James Mitchell

During the Atlantic crossing, Natasha’s family restricted helming spells to around an hour, because the sip and puff controls can lead to dehydration. When I asked Natasha how long she would like to sail for, she replied: “All day!”

“It’s just incredible to see Natasha sail,” says Amanda. “To think of everything that we’ve gone through over the last years, and since Natasha was born, when I think of everything that was told to us that wouldn’t be possible… to actually see Natasha controlling a boat like this is just phenomenal. We just feel so, so lucky and so proud of her.
“Natasha has definitely taken us all out of our comfort zone. She has pushed all the family to the limits and we are all really enjoying it now. Natasha is quite proud to think she has convinced us all to do this, and we are all really happy to be here to support her.”

The post Blown Away: How this Nautitech 46 Open was modified for Natasha Lambert appeared first on Yachting World.