Rachael Sprot talks through her top hints and tips on handling large yachts, which are becoming more popular in both private ownership and the charter market

If there’s one trend that’s true across all areas of sailing, it’s that large yachts are becoming more common. Advances in technology have made ever-larger yachts more affordable while sail handling systems have evolved to make them easier to handle.

Whereas a 50-footer was once likely to be a ‘flagship’, now most manufacturers have at least one model over 50ft, often an entire range, many of them capable of being sailed short-handed.

The trend is repeating among the charter market: Sunsail now offers a 52ft monohull in their bareboat range, making large yachts accessible to those with an RYA Day Skipper Practical certificate and above. Yet there are not many opportunities to train on this size of vessel. We take a look at some of the factors that need to be considered when making the step-up:

A yacht’s length itself is not the biggest challenge to overcome, you’ll soon adapt to the longer profile when coming in and out of marinas. However, be aware that there’s a bigger blind spot under the bows of a larger yacht.

In confined spaces or areas with lots of activity on the water it’s important to keep an active look out: mooring balls or dinghies can quickly disappear. Most modern yachts handle well in astern, and reverse parking is one of the easiest ways to overcome this problem because the skipper has a better view of where they’re going. Otherwise, post a spotter on the bow.

Communication is more difficult over a longer deck, so brief your crew before sending them forwards and have an agreed set of hand signals. 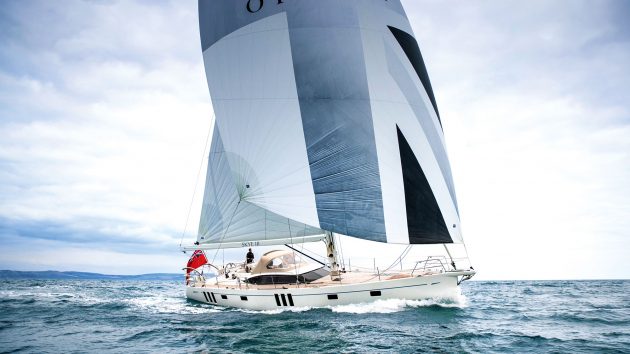 When coming alongside, brief the bow team to count you down from 5m using their fingers. It’s much more effective over the noise of an engine and is more discreet – no-one wants the whole marina knowing that you’ve gone from ‘Two!’ to ‘Zero…ZERO!’ metres on the bow.

Displacement increases disproportionately to length. For example, the 2011 Hallberg-Rassy 412 weighs 11.1 tonnes, while the 64ft version of the same vintage weighs 36 tonnes. That’s a 50% increase in length and more than 300% in weight.

Increased weight means there’s much more power behind every manoeuvre. It takes a while to get 30-plus tonnes moving through the water, but once it’s moving it keeps moving. To avoid doing things too fast, on larger yachts you can do much of your power-handling in neutral once you’ve established steerage because the boat will carry its way for longer.

Be mindful of stopping distances and go gently: fenders won’t be three times bigger than on a 41-footer. Even at slow speeds, 36 tonnes can cause a lot of damage so be cautious with your revs.

With a higher freeboard you’ll need to plan your berthing carefully: you can’t rely on a crew member being able to get off and stop the boat, or to push you out of a berth and jump aboard. Use bow or stern springs on slips to exit a berth cleanly instead of the ‘shove-n-go’ technique.

When coming alongside, a midships line is a great way to get the boat more or less secure – drive forwards on a midships line and turn the helm away from the pontoon. This can hold the yacht in position while you set up the other lines. Mastering the art of lassoing a cleat will save the crew from the hazard of stepping off high decks.

Every manoeuvre is slower to execute than it would be on a smaller boat, and once set in motion, harder to stop. Just walking around the boat to set up lines and fenders takes longer, let alone gybing a spinnaker or putting in a reef.

Give yourself plenty of time to think through the manoeuvre, set things up and allow the sea room for executing them. It’s the biggest single factor that will reduce stress for both skipper and crew.

When to move up