The RYA’s former Yachtmaster chief examiner, James Stevens answers your questions of seamanship. This month, how would you deal with an MOB?

Geoff is skipper of Windshift, a Sigma 38. He and his three crew are sailing across Cardigan bay at night in a fresh breeze.

In the darkness, the boat is caught by a wave and a moment’s inattention, leading to an involuntary gybe.

One of the crew, Jack, is caught by the mainsheet and swept overboard.

Geoff manages to stop the boat, furl the headsail and motor back to the casualty.

Fortunately Jack is wearing a lifejacket, is conscious in the water and has activated his lifejacket light, so they manage to locate him.

They now have the problem of getting him back on board.

Jack is 14 stone, before you add on all his wet clothing, and he is getting weaker by the minute in the cold water. 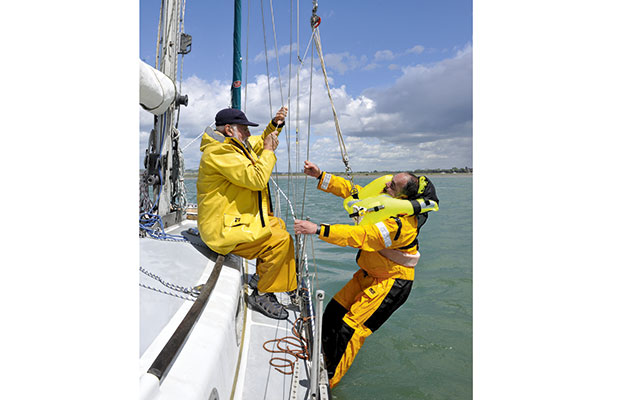 A rescue sling, attached to a handy billy on the main halyard, can be an effective means of recovery

Windshift still has the lifebelts on board, though these have flimsy plastic clips, but the danbuoy has already been deployed.

There is no specialist kit for retrieving a MOB.

Pick him up to windward to prevent the yacht going over him. No, to leeward or he’ll drift away.

Use the stern ladder, no he’ll get hit by the stern.

Parbuckle him up in the jib. Pull him up with the main halyard. No, he needs to be kept horizontal because the release of hydrostatic pressure could put lethal pressure on his heart.

What should Geoff do?

Jack’s condition is getting more critical by the minute.

Most professional skippers agree that a pickup to leeward of the yacht is the easiest option.

The yacht will drift down to the MOB and the deck is lower.

The manoeuvre is easier under power and Geoff might consider releasing the main halyard as the flapping main and boom across the deck could be a hindrance.

The boat has to be stopped in the water.

Once Jack is alongside he needs to be attached to the boat with a rope, harness or any means of preventing him drifting away.

The next part depends on how strong Jack is.

The stern ladder is certainly a quick option but could be dangerous in a big sea.

If he’s still feeling strong a bowline could be lowered over the side and, led to a winch, this can be pulled in to help him climb up.

If he’s too weak for that, three adrenaline- fuelled crew using the roll of the boat might be able to pull him over the rail. Uncomfortable but quick.

Alternatively, it is really hard work winching a man out of the water with just the main halyard, but possible.

If the mainsheet falls are on snap shackles and can be reversed so the working end is at the top on the boom, the other end of the mainsheet can be attached to the MOB and as a handy billy with the boom swung out.

Parbuckling with a sail over the side is unlikely on a windy day.

Another factor to consider is the release of hydrostatic pressure on a person’s circulation as the casualty comes out of the water – a serious problem for people who have been immersed for long periods.

As Jack has only been in the water for a few minutes it is more important to get him on board fast rather than try to organise a horizontal lift.

There is no single answer, but every skipper should think about and rehearse possible scenarios in more benign conditions.

The post Can you get the MOB back on the boat? appeared first on Yachting Monthly.