If it could float, it was out on the water in Sydney Harbour that day. Ferries, dinghies, powerboats, catamarans, superyachts, naval ships, and everything in between streamed across the famous inlet. My partner, Nick, and I had collected our charter catamaran from its base, tucked into Rozelle Bay in Sydney Harbour, and now had to navigate this bustling city’s water traffic in an unfamiliar catamaran. We were both feeling a little nervous.

However, the moment that Harbour Bridge came into view, followed moments later by the Opera House looming in the background, our fears were overcome by the sheer thrill. There is nothing quite like sailing past an iconic landmark, and they don’t come more iconic than Sydney’s Harbour Bridge and Opera House. As an Australian I’d dreamed of this moment for years and I bounced around the boat with excitement that a bucket list wish was finally being realised.

A year ago, Nick and I were lucky enough to be one of the very few people who managed to secure a flight to my home country, Australia. After two weeks of hotel quarantine we were free to roam what was, back then, a Covid-free nation with very few restrictions.

Vanderloo at the helm of the chartered Seawind 1260

We were set on cruising the coastline of this vast country and so we opted to do two long-term charters: one in New South Wales and one in the Whitsundays in Queensland. We chartered the same model of boat on both occasions, a Seawind 1260. This is a smaller version of the Seawind 1370, a newer design from Seawind Catamarans that we currently have in build.

The charter would be an ideal stepping stone from our years on board our monohull, a Southerly 38, to future liveaboard cruising on a larger cat. Our first test was to navigate our way out of Sydney Harbour – a great exercise in testing out the visibility from the helm, not to mention our knowledge of Colregs.

But just a short sail away was the peaceful Middle Harbour, a few miles from Sydney Harbour yet a world away in atmosphere. Much of Middle Harbour is a national park, and a serene natural sanctuary. 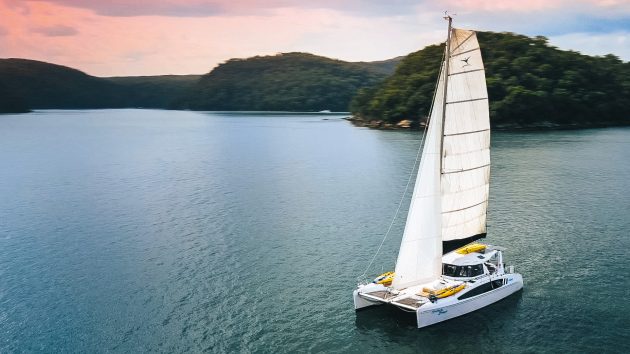 Bantry Bay was a memorable spot, and we took the dinghy ashore to hike around its perimeter – a satisfying and enjoyable expedition until we came across a huge spider hanging amid its web at face height, just inches from the path.

It was an orb-weaver spider, harmless and non-aggressive, but intimidatingly large nonetheless. This was our first encounter with Australia’s spider population, but by no means our last, and while British-born Nick retained some natural caution, he soon adopted a more Australian (read: blasé) attitude towards our native wildlife.

We raised the mainsail and unfurled the jib, turned the engine off and settled into several hours of gentle, easy sailing. The swell was quite large, but a lengthy swell period meant that the conditions were still very comfortable; we slowly rose up and down as the wide waves passed beneath us.

We previously had only a small amount of experience sailing catamarans – a day trip off the Spanish coast, a week’s holiday with friends in French Polynesia, a couple of test sails at the Annapolis Boat Show – but this was the first time we’d had the opportunity to sail a cat with just the two of us, and we relished it. The boat was easily making 8 knots and the motion underway so comfortable that I went down below to make a cup of tea and, if I closed my eyes, could have imagined we were at anchor. The most dramatic difference between monohull and multihull sailing was the stability underway. 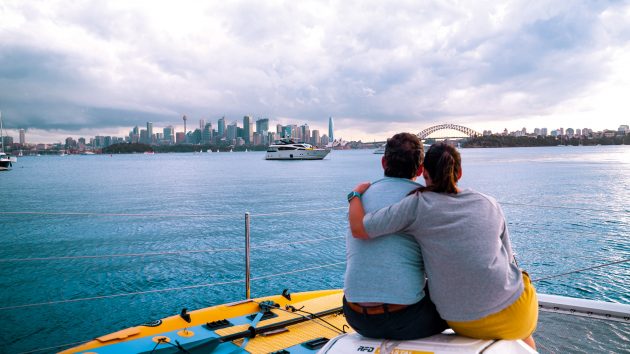 Bucket list view of Sydney Harbour from the water for Terysa Vanderloo and partner Nick Fabbri.

We reached Pittwater more certain than ever that the decision to sell our monohull – something we agonised over for years – was the right one. Countless bays, coves and creeks dot this inland waterway, all protected from the ocean swell and offering a real sense of isolation and a connection to nature. There were many mooring buoys to choose from, all free to use and well maintained – a pleasant surprise.

America Bay was a stand-out spot, surrounded on all sides by the bush. We took the dinghy to the bottom of a waterfall, clambered up the mountainside alongside it, and ended up doing quite the bushwhack, but finally made it to the top. We encountered more of Australia’s native wildlife while moored in The Basin, a popular anchorage next to an idyllic lagoon and camping spot. This is home to a large number of wallabies, all utterly unfazed by human company.

On our return sail back to Sydney we spent a couple of nights at Athol Bay, on the north side of Sydney Harbour, which has the most spectacular outlook over the city skyline. One night a thunderstorm came through, lightning streaking across the horizon. On others it was clear and bright and we sat in the cockpit all evening watching the city lights twinkle to life. It is truly one of the most special views we’ve ever been lucky enough to enjoy at anchor. 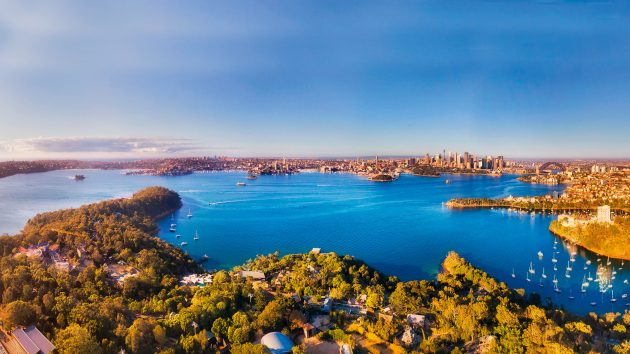 Sailing in the Whitsundays was a total contrast. I’d naively assumed it would be similar to sailing in Thailand or the Caribbean: gentle breezes, the sun shining and palm trees lining white beaches. Well, there were beaches and a few palm trees, but the weather was completely different to what we’d expected.

Our first week saw a strong wind warning, which not only restricted where in the islands we could go (we had to stay on the westward side of the islands, protected – slightly – from the south-easterlies) but we also weren’t allowed to sail at all. Charter company rules said we had to motor everywhere which was a disappointment, although we understood the rationale. Even had we been on our own boat, I’m not sure we’d have wanted to venture onto the windward side of the islands in 30 knots of wind.

However, once windspeeds dropped below 25 knots, we were able to raise the sails and get in some lively sailing. This gave us an opportunity to experience cat sailing under more challenging conditions. When the conditions are ideal, just being out on the water is a joy. But when the wind is howling, the sea state short and choppy, and you’re sprayed with saltwater every time you stick your head out, the vessel itself becomes paramount to getting any enjoyment of the experience (at least, that’s how I feel!).

In this situation, we couldn’t believe how comfortable our catamaran was, even as waves broke onto her windward bow, water slamming into the forward-facing windows and spraying against the clear side panels we’d put up to protect the twin helm stations. 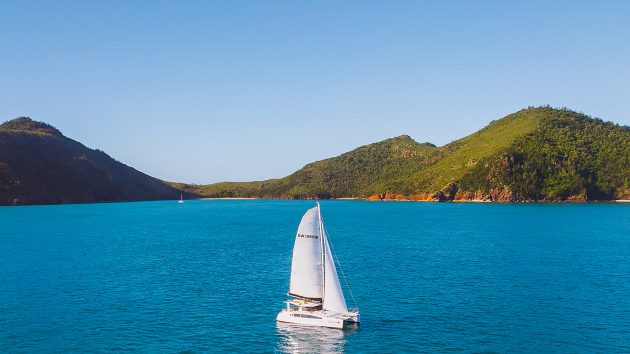 Cruising off Border Island, in the Whitsundays

There are many options for destinations in the Whitsundays, so while the strong prevailing south-easterlies were blowing, we stuck to the windward side. Cid Harbour on Whitsunday Island was a particularly welcome find, both expansive and a well-protected anchorage. Ashore, we did the Whitsunday Peak hike, a winding and at times steep climb to the highest peak in these islands, surrounded by thick bushland.

Despite the strenuous nature of the hike, the view when we reached the top was well worth it. We could see the Whitsunday Islands stretch below us in every direction, right down to our dinghy, now afloat with the incoming tide. With no desire to swim out to our dinghy – there have been several shark attacks in Cid Harbour – we charged down the trail to reach the beach before the tide came in much further. We only had to wade out to our knees, but fellow charterers weren’t so lucky and had to swim to theirs. 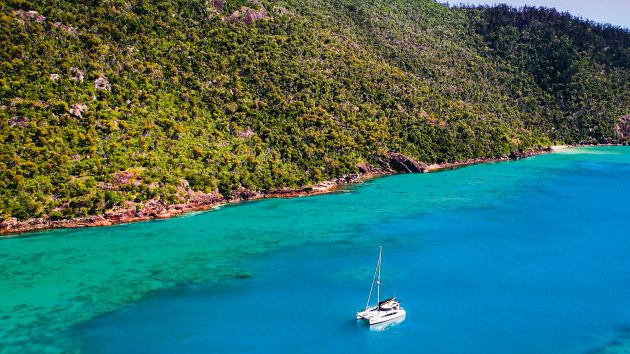 South Mole island offered more spectacular hiking. Here the vegetation is less dense and instead the hills are covered in long green grass, rippling in the high winds. Again, we had the hiking trail completely to ourselves – in fact, we had the entire island to ourselves, as it’s uninhabited with only a campsite ashore, the only access being by boat. The anchorage was a little choppy due to the high winds, but the sense of being utterly remote while on land was wonderfully invigorating.

By way of contrast, a trip to Hamilton Island cured any notion of isolation. It’s the main resort island in the Whitsundays and home to a large marina, hotel, several restaurants and about a billion golf buggies, the island’s only form of transport. Hamilton Island gave us a chance to provision and fill our water tanks, but it’s considerably more busy than the other islands in the chain.

Our favourite anchorage of all has to be Butterfly Bay, which sits on the northern coast of Hook Island. Mooring is only permitted on laid buoys, but there were plenty of buoys available, as was the case throughout our entire Australian cruise – a pleasant change from the stress-inducing crowded bays of some popular Caribbean islands, or the cramped anchorages in much of Europe. 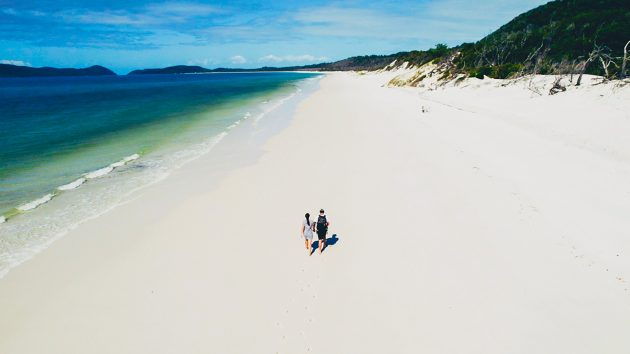 Butterfly Bay is actually two bays next to each other, which form the shape of butterfly’s wings. Hook Island, like much of the Whitsundays, is also a National Park and totally uninhabited. The edges of the bay are trimmed in coral, which we immediately swam out to explore. Although we saw plenty of fish and some interesting coral, the shallower coral heads were still recovering from damage by Cyclone Debbie in 2017. Freediving to deeper corals rewarded us with healthier, more prevalent coral heads and scuba diving to even deeper levels would reveal yet more sea life.

Of course, no sailing trip to the Whitsundays would be complete without a visit to Whitehaven Beach, situated on the eastern side of Whitsunday Island. Whitehaven is regularly voted the best beach in the world. Pristine and untouched despite its popularity, its sand is made up of 98% pure silica, giving it a bright and brilliant white colour, while the surrounding waters take on a beautiful turquoise hue.

While the south of the beach was home to daytripping boats and other charter yachts, it was only when we explored along to the empty northern end of the beach that we could truly enjoy its untouched beauty. Here, the only footprints belonged to us, the sand soft and silky underfoot. Hill Inlet wraps around the northern tip of the beach, a shallow meandering inlet with shifting white sand bars and blue water. Several yachts had made their way up the channel at high water, and we’d been told it was possible to dry out there. Unfortunately that was off-limits to us as we were on a charter boat, but we dearly hope to return one day on our own catamaran to further explore this incredible cruising area. 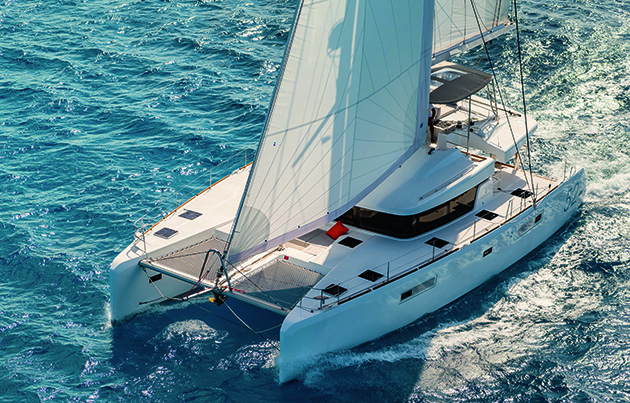 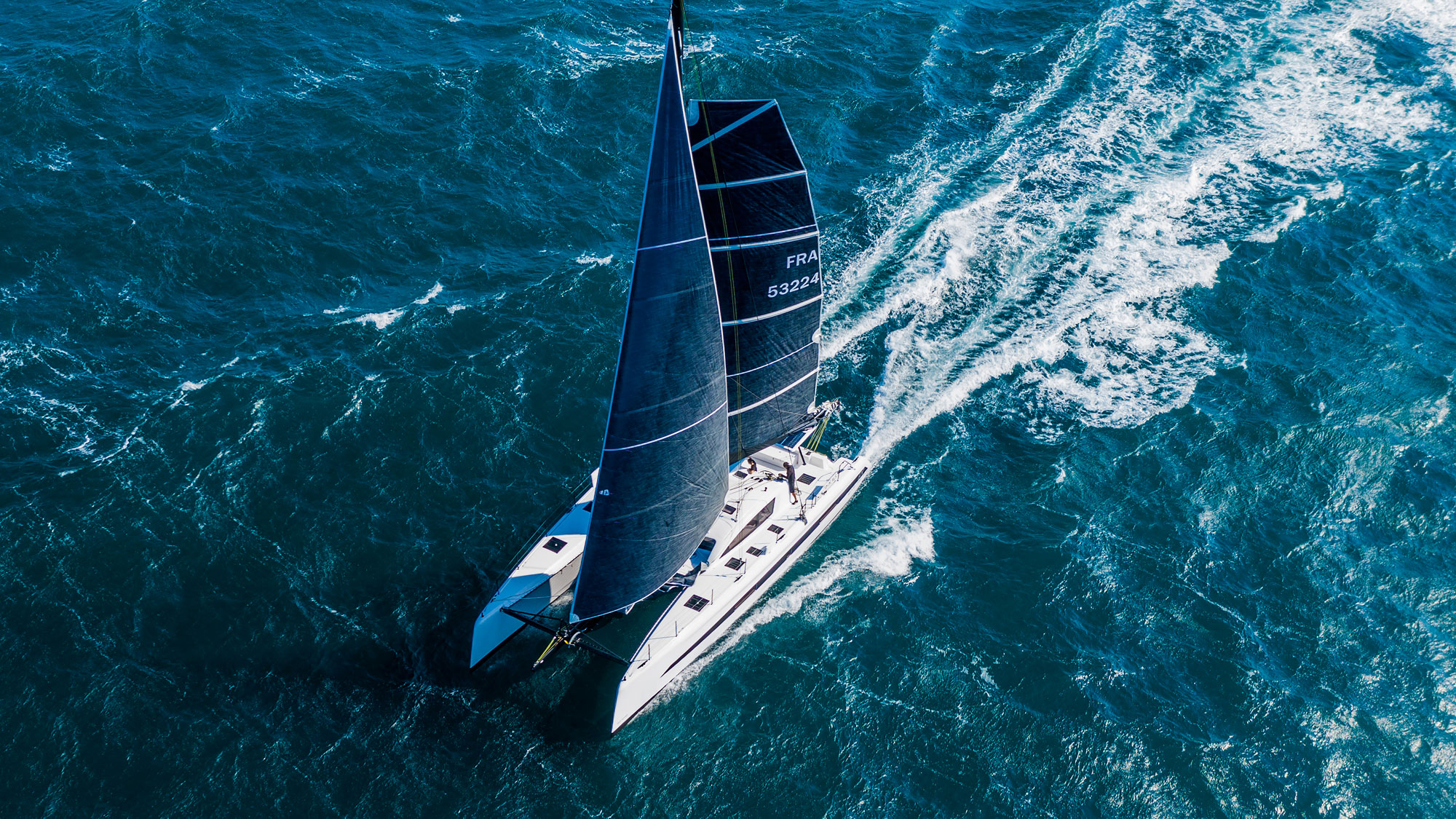