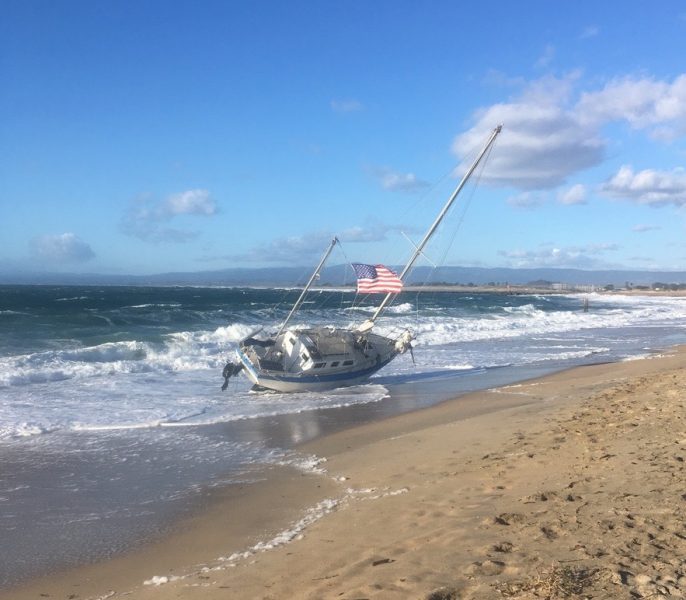 This yawl ran afoul of a Small Craft Advisory in December 2018, winding up on the beach in Moss Landing. Both the skipper and the boat survived the incident. © 2020 Stefan Berlinski

BoatUS sent this message to its contact list on Wednesday: “In a move that could simplify and potentially reduce misunderstanding of urgent weather messages used by recreational boaters to make critical boating safety decisions, the National Weather Service (NWS) has proposed renaming ‘Small Craft Advisory to ‘Small Craft Warning’.” The NWS requests boaters’ feedback. “Boat Owners Association of The United States (BoatUS) urges boaters to speak up now by taking a NWS survey for recreational boaters at www.surveymonkey.com/r/VZGX6BF. The survey closes May 24, 2020.”

“Every day they go boating, boat owners check the weather and then make the decision to either head out or not,” said BoatUS government affairs manager David Kennedy. “We think the name change will help clarify what this means, leading to a better understanding of the severity of a marine weather forecast, and help give recreational boaters the information they need to make smart choices about boating safely.”

For decades, NWS has used the Watch, Warning and Advisory system to alert users about forecast hazards, but it has recognized this can be confusing. The proposal to rename ‘Small Craft Advisory’ to ‘Small Craft Warning’ is part of a larger effort to reduce the messages to just two terms: Watch and Warning. NOAA also says the name change would better align with all other marine warnings — Gale, Storm, and Hurricane Force Wind — leading to greater understanding by recreational boaters.

Changing from ‘Advisory’ to ‘Warning’ would not change the term’s definition. While there is no precise definition of a ‘small craft’, a ‘Small Craft Advisory’ is issued when sustained wind speeds or frequent gusts have reached 20-33 knots, and/or for seas or waves of 4 feet or more, and/or for waves or seas that are potentially hazardous. The requirements vary slightly by region, and local conditions may also prompt a Small Craft Advisory.

Small Craft Advisories are no strangers to San Francisco Bay. It almost seems as if we get one most days when the winds of summer blow through the Gate.

For the rest of the story from latitude38.com CLICK HERE!