Clarionet is one of the original Sparkman & Stephens ‘terrible twins’ which set the trend for performance fin keel yachts, Nic Compton steps onboard

At just 36ft 9in, the Sparkman & Stephens sloop Clarionet is an unassuming yacht, often dwarfed by larger competitors on the UK classic racing circuit. Yet Clarionet helped change the course of yacht design and influenced the shape of most boats since the 1960s.

It is no wonder, then, that her current owner has taken the trouble (and expense) to return her to original configuration – even though the work has almost certainly ‘de-optimised’ her for racing. Her race winning days may well be over, but something more important has been achieved in the process.

Clarionet was built during a major turning point for yacht design. Designers had been experimenting with fin keels since the 1890s, but the concept only really took off after the resounding success of Bill Lapworth’s Cal40 design in 1963.

Sparkman & Stephens soon came in on the act, designing their first ‘centreboard and skeg’ design, the 40ft Deb (now Sunstone), in 1964. But it was the success of a pair of boats designed for the RORC’s One Ton rule that convinced Olin Stephens to fully embrace the concept.

Both were traditionally built at the Clare Lallow boatyard in Cowes, of mahogany planking over larch frames. They were lightly fitted out, mostly in 6mm ply to keep weight down. Or, as Olin Stephens delicately put it: “Layouts below are similar, being simple and clearly directed towards offshore racing.” 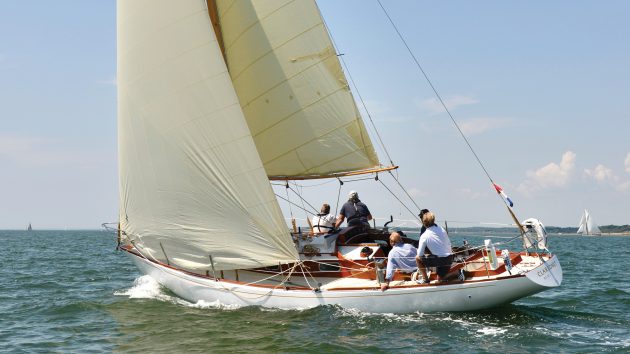 After years of development to keep her competitive on the racing circuit, Clarionet has now been restored to her original specification. Note the ‘plank boom’. Photo: Nic Compton

The two boats took the British yacht racing scene by storm in their first year, with Clarionet winning Cowes Week and the RORC St Malo Race in 1966, and Roundabout winning the Round the Island Race two years running in 1966/67. Despite their success, however, they were not without their faults and proved at times hard to control, as Stephens later admitted:

“Despite sharing a conspicuous fault, Clarionet and her near sister Roundabout soon showed their ability as two of our more successful yachts. They became known as the ‘terrible twins’ both for the speed they showed and their frequent broaches on hard runs. Thus in a single shot they demonstrated the value – and the danger – of something new: the pioneering use of the separated rudder and keel.”

Despite these reservations, the performance of the two boats encouraged Olin to use a similar keel on one of Sparkman & Stephens’s most successful designs ever, the 12-Metre Intrepid. It was the end of the long keel configuration in the America’s Cup and, by extension, yacht racing in general. Sailing yacht design would never be the same again – thanks in part to the outstanding performance of those ‘terrible twins’.

Clarionet’s career wasn’t all plain sailing. After her triumphant first year race results were decidedly mixed, including finishing 13th out of 21 boats in the 1967 One Ton Cup at Le Havre. Perhaps that’s why, just 18 months after she was built, Boyer took the drastic decision of asking Lallows to raise the deck.

At that time, the RORC racing rule included a mast height factor which was measured from the deck to the top of the mast, and Boyer hoped to gain an advantage by reducing that measurement.

An early photo of Clarionet as she looked when first launched

Lallows duly increased the camber of the deck beams, so the foredeck was raised by about 4in in the middle, creating a turtle-back effect. As a result the cabin sides were reduced to an ugly wedge just 2in high at the forward end, and both forward portholes had to be removed and blocked in. It was a brutal alteration which proved pointless as within 12 months the rule was changed anyway.

Boyer sold the boat in 1971, and she then went through a succession of owners. One of these was JJ Rainworth, who entered her in the first AZAB (Azores and Back) race in 1975, finishing a respectable 9th place out of 52 boats – two places ahead of Robertson’s Golly skippered by Claire Francis.

Two years later she was bought by George Playfair, whose son, Nick, entered her in the notorious 1979 Fastnet Race. Clarionet had by then been fitted with wheel steering, which jammed shortly after the beginning of the race. Undaunted, her crew fitted the emergency tiller and battled on to within 55 miles of the Fastnet Rock before retiring – along with most of the other boats in their class. 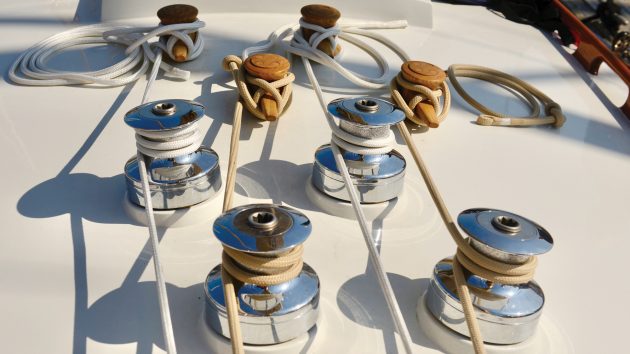 The modern clutch system was replaced with original spec dedicated halyard winches with their own ‘snubber’ cleats. Photo: Nic Compton

In the mid-1980s, the yacht was bought by John Breakell who based her on the River Orwell in Suffolk. He undertook an extensive refit, including replacing the raised deck and upgrading the boat’s sail wardrobe, adding a new Mylar genoa, a Dacron mainsail and a couple of tri-radial sails.

Her winning ways continued under her next owner, Paul March, who based the boat in Brighton, competing in several Fastnets and at least one Round Britain and Ireland Race. Clarionet was RORC points champion five times, even winning her class in the 2001 Fastnet, by which time she was 35 years old. 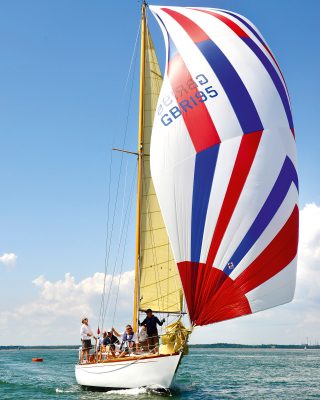 By 2013, Clarionet had acquired the status of a classic and, under new owners, joined the circuit on the Solent, winning 1st at the 2013 Panerai British Classic Week and 2nd in 2014 and 2015.

By the time Andrew Harvey spotted Clarionet, she had all the trappings of a modern racing yacht, including aluminium mast, self-tailing winches, laminated sails, ball bearing blocks, rigid boom vang and a retractable bowsprit for an asymmetric spinnaker. It was the natural development of a yacht that had been raced hard for decades under multiple rating rules and was intended to win rather than look pretty. But Harvey had other ideas.

“I originally thought we’d just replace the aluminium mast with a wooden one,” he says. “But then I looked at the original plans and saw how stunning she was originally. So we had this discussion about how, if we just want her to be competitive, there’s a lot of stuff we don’t need to do. But my view was to make her as original as possible. She would be less competitive and she would be more difficult to handle, because of the winches, the blocks, the sails – everything would be more difficult. But who cares?”

Clarionet was entrusted to the capable hands of Paul Spooner and Mike Barnes, who have vast experience of restoring yachts designed by William Fife, GL Watson and suchlike but hadn’t tackled a project built as recently as the 1960s.

The pair researched the boat’s history and, using archive photos and the original drawings – miraculously still filed in a cabinet at the Lallow boatyard – pieced together what she would have looked like when she was launched in 1966.

Turning their research into physical reality was the job of Paul Kendall and Tim Frearson at Traditional Shipwright Services in Poole. The biggest job was lowering the deck, which involved fitting new deck beams with less camber for the front three quarters of the boat, as well as replacing the cabin sides.

But it’s the level of detail achieved by the restoration team that is truly impressive. For example, the plastic tops on the stainless steel stanchions were no longer available, so they were carefully recreated in CAD and made on a 3D printer. The self-tailing tops were removed from the winches and replaced with plain tops machined from solid bronze.

There were a few surprises along the way, not least the four halyard winches located on the coachroof with their unusual, one-armed wooden cleats. Even though they appear less efficient than the multi-clutch system that had replaced them, they were lovingly replicated according to the original drawings. Likewise the experimental ‘plank’ boom, which was accurately recreated by Collars, along with the new wooden mast. 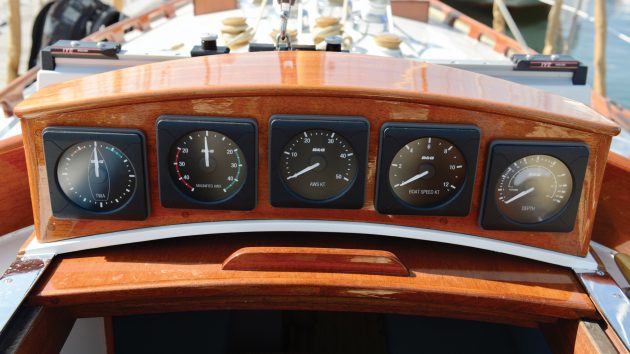 The digital read-out were all ditched in favour of analogue gauges supplied by Brookes & Gatehouse. Photo: Nic Compton

As for sails, all the fancy modern sails accrued over the years were replaced by a narrow-panelled mainsail and mitre-cut foresails in ‘Classic Cream’ from Bainbridge Sails.

Below decks, the original plywood interior had survived remarkably well and just need a lick of paint, although the search of authenticity saw the modern heads chucked out and replaced with a refurbished Blake. The hull also needed little work, despite all the years of racing, but the veneer applied to her transom a few years before was removed and painted over, as per original. 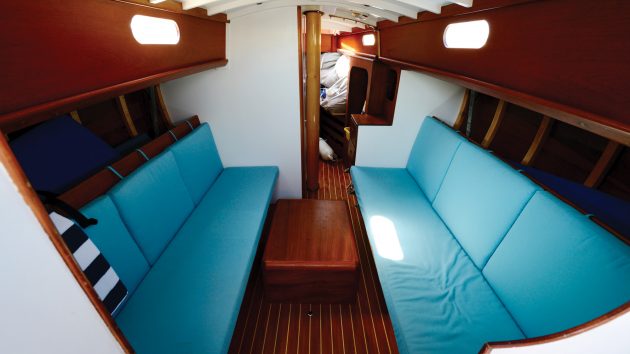 The unfussy and utilitarian interior was mostly built from 6mm ply to help keep the boat’s weight down. Photo: Nic Compton

It’s an extraordinary amount of work to make a boat less efficient than she was, but having acquired the status of a classic yacht, authenticity was always going to be the holy grail. It’s a process that might give her an advantage under the CIM handicap rule used on Mediterranean classic yacht races but doesn’t find much favour under the IRC system used by the British Classic Yacht Club. Indeed, Clarionet finished 6th in class at British Classic Week last year. She did however win another accolade: the trophy for Best Presented New Entrant – the closest thing the regatta has to rewarding authenticity. Sometimes history is more important than victory.