Two trimarans each set a new record in the space of 4 minutes, as a staggered start attempt at the Cowes-Dinard course saw a new record set twice

A MOD70 and Multi70 trimaran both set out on Thursday 22 April in an attempt to break the Cowes-Dinard course record in what was billed as a match race for the record.

The blast across the channel certainly lived up to its billing as Peter Cunningham’s MOD70 PowerPlay (who set a new Fastnet course record recently) set an unofficial world record for the Cowes-Dinard Course initially, but for the Hamble-based team, the euphoria was short-lived as the later-starting Multi70, Maserati crossed the finish with an eve better time. 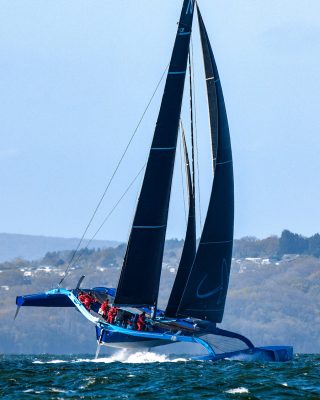 Both teams recorded boat speeds in excess of 40 knots, at an average speed in excess of 30 knots. To put the amazing pace into context, PowerPlay’s Tom Dawson quipped that the Portsmouth to St Malo ferry takes seven hours!

“Fantastic, the sun is shining, and we broke the record, but unfortunately for us, Maserati broke it too!” commented Peter Cunningham. “We hit a top speed of 43 knots with Ned (Collier Wakefield) on the helm and SiFi (Simon Fisher) was making sure we stayed on course for the record.

“We buried the leeward hull a couple of times, so the amount of spray was enormous! Paul Larsen took the helm coming into the finish and pushed us really hard, it was fantastic. We did have to put in a couple of gybes in The Solent and we had an issue with the reefing, I guess that cost us time.”

“Why do I do it – How else can you break a world record at 80 years old?” continued Peter. “It is an incredible feeling of accomplishment for the crew. When the boat is in the groove and takes off, screaming along, but really well balanced, it is an amazing experience. To be racing on this man-made creation which has a spirit of its own, combined with a brilliant team, it is a truly wonderful feeling.”