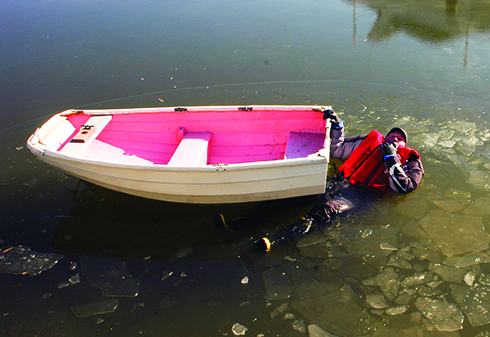 With record warm weather settling over the Chesapeake earlier this week, the temptation to get out on the water is great, but it’s important to keep in mind that water temperatures remain dangerously cool. You still want to be dressed for winter.

My previous post about cold weather apparel for sailing neglected to mention one of the more interesting ways that some offshore sailors, particularly racing sailors and delivery skippers, deal with the cold and wet. Foul weather gear remains the primary means that sailors rely on to stay dry and warm, but our field testers are becoming more and more impressed by the advantages of dry suits-those stretchy, sealed, often breathable suits worn by surfers, kite boarders, and that twisted breed of winter sailors known as frostbiters. The topic of drysuits came up again, recently, as out report “Sailing Clothes for Cold Weather” took a broad look at cold-weather apparel for sailors. In that report, dry suits again were highly rated.

We’ve done a couple reports on dry suits: one a full blown comparison between wetsuits and drysuits from various manufacturers (accessible to subscribers); and two single-product reports on suits from Ocean Rodeo, one called the Soul, which we reviewed in 2012, and another called the Ignite, which we tested in late 2014.

One of the key advantages that a dry suit has over foul-weather gear, is that in extreme conditions that you find in the higher latitudes-especially fall through spring-a drysuit will stave off hypothermia, increasing your odds for survival in case you or your boat go over.

The potential benefits of a drysuit were highlighted in the recent Cheeki Rafiki tragedy, in which all four crew members aboard a Beneteau First were lost at sea when the boat lost its keel and capsized. Post-accident reports suggested that one or more of the crew might have survived long enough for a rescue if they had better protection from the cold. Although an EPIRB or personal locator beacon (PLB) can direct rescuers to persons in the water, even in horrific weather, such efforts are in vain if the victims can’t maintain a safe body temperature. For decades, cold-water sailors and fisherman have kept survival suits on board, but these relatively bulky neoprene suits, which we tested in 2007, make it difficult to carry out the basic actions required to operate a boat, so they are seldom donned, except in dire circumstances. And those sailors who have enough time to don a survival suit suddenly find their mobility sharply reduced, both on the boat and in the water-as was the case with the survivors of the Bounty.

The problem with survival suits is that there’s no telling when the big wave or brutal wind gust will hit, and there might not be time to don a survival suit. Some survival suits have sewn-in gloves that make it almost impossible to turn on the radio or deploy a personal locator beacon. That’s why wearing a comfortable, breathable drysuit makes sense. It leaves you much more ready to manage the boat in heavy weather. And should the unexpected happen, your odds of survival in the water are better than they would be in foul weather gear. The nice thing is that if the situation calls for a survival suit, you can still don a survival suit while wearing your drysuit.

What do you think? If you were crossing the North Atlantic next week, would you be looking at a survival suit, drysuit, both-or none of the above? If you have had experience with either a drysuit or a survival suit, Id be interested in hearing your comments, either below or by email at practicalsailor@belvoirpubs.com.