Few boats have had such a rich and varied history over the past 40 years as this one, now known as Energy Observer.

Would Nigel Irens and Mike Birch, the boat’s creators, even recognise it today? The slender bows of Formule TAG, now Energy Observer, remain the identifying feature of this famous ocean racer, but much else has changed during the boat’s many lives.

In 1983, the 80ft Formule TAG was launched as part of a revolutionary new generation of multihulls designed for ocean racing and record-breaking. At the time it was the largest ocean racing catamaran of its type, built using aerospace technology. The following year it beat the 24-hour record by covering 512.5 miles.

In 1993 it was bought by Peter Blake and Robin Knox-Johnston for a Jules Verne attempt, famously flying a spinnaker decorated with bright red and green apples under the name ENZA (Eat New Zealand Apples).  The second attempt, in 1994, succeeded and the boat set a round the world crewed record of 74 days. 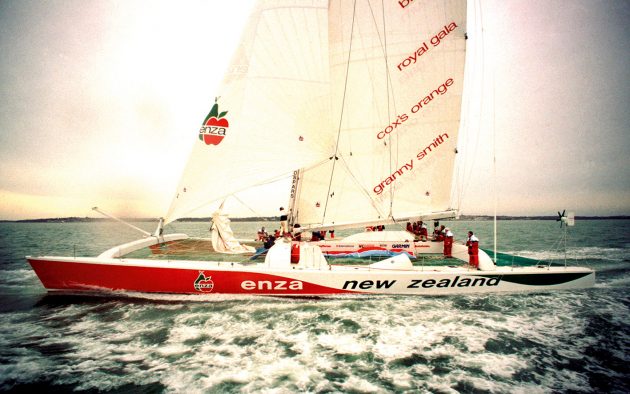 Then Tony Bullimore took it on, extending the hulls to 100ft and racing as Team Legato in the round the world race organised by Bruno Peyron to celebrate the year 2000: The Race.

In 2010, off Cape Finistère, it capsized in 15 knots of wind. Many thought the boat would never recover from such an accident: too old to race, too damaged to be repaired.

However, French entrepreneur Victorien Erussard, who has sailed everything from Hobie cats and Formula 18s to competing in the Route du Rhum and Transat Jacques Vabre, had a different idea.

His aim was to build the first 100% energy self-sufficient vessel. The chassis of a former ocean-racing catamaran would make the ideal platform, and ‘recycling’ an existing boat fitted perfectly with the project’s ambitions. 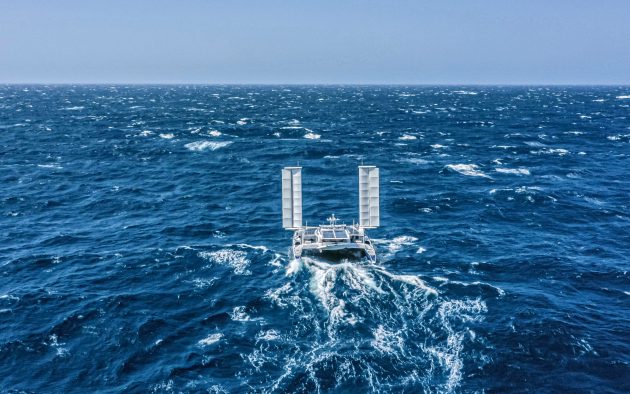 The two Oceanwings developed by VPLP have a total surface area of 64m² and are 1.8 times more efficient than conventional sails and rigs. Photo: Energy Observer Productions

Since Energy Observer was launched in 2012, the project has been in constant evolution, and has so far covered over 30,000 miles.

The Energy Observer team believes that in order to be feasible as a truly zero-emissions boat, capable of sailing from the Arctic Circle to the equator, the vessel requires a mix of energy sources. Having a diversity of sources improves “reliability, performance and safety” notes Louis-Noël Viviès, the project’s general manager.

The main propulsion on board is provided by two 45kW electric motors. These are generously sized and are not used to their maximum capacity, so offer high efficiency. Opting for a single battery bank capable of powering them over a long period of time without recharging would have sent the project into a downward spiral in terms of weight. Instead, Energy Observer has two smaller battery banks, with a combined total of 100kW, which is also safer.

This hybrid solution still weighs in at 1.4 tonnes. In the future, with lighter batteries currently being developed, this weight should be halved for the same capacity.

The batteries act as a buffer between the motors and the four different energy sources required to guarantee a 24/7 power supply. The most innovative of these is undoubtedly hydrogen. 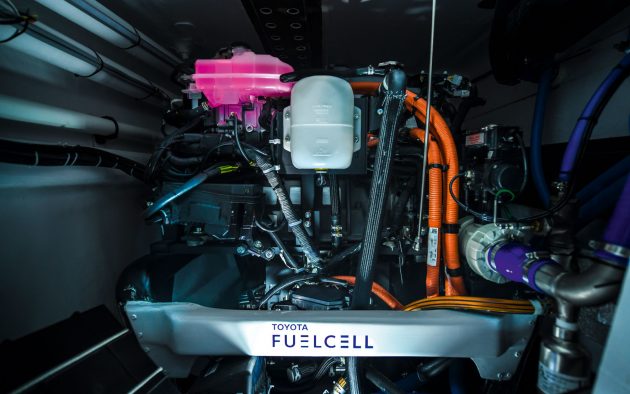 Developed in partnership with Toyota, the two hydrogen fuel cells are capable of producing 10 times more energy than batteries on board for the same weight, and almost indefinitely. Photo: Energy Observer Productions

The battery was developed by the project’s partner Toyota, from the one used in their hydrogen-powered car the Mirai. “It provides 10 times more energy for the same weight than the other batteries on board,” says Viviès. There are two hydrogen batteries, one in each hull, with a peak power of 80kVA. 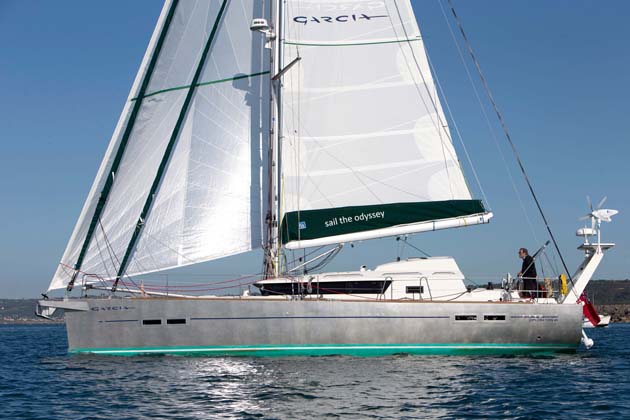 Cruising guru Jimmy Cornell has put his years of experience into a new boat for world cruising. Matthew Sheahan finds… 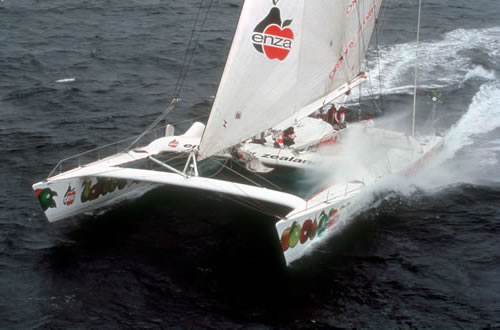 Although they now cost three times less than the first generation batteries originally installed, the hydrogen batteries are still twice the price of a generator of the same power. On the other hand, they are guaranteed for 80,000 hours, maintenance-free, and have no associated fuel costs, since Energy Observer manufactures (via desalination, purification then electrolysis) and stores in eight tanks of 64kg its own hydrogen from sea water.

The efficiency of the battery is 2.5 times higher than that of diesel once you consider the energy needed to extract, refine and transport it to the pump. The battery also generates 50% of the heat used on board, so the crew never lacks hot water, and was able to enjoy a cosy warm interior during the boat’s trip north to Spitsbergen. 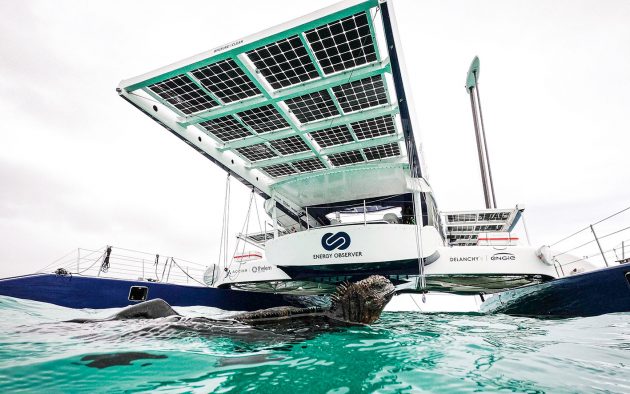 The third energy source is the solar panels, which cover 202m² of surface area and put out a cumulative power of 35kW. The solar panels use various technologies depending on their location on the deck or superstucuture.

Some are double-sided to capture the rays reflected by the surface of the water. Elsewhere, they are covered with a non-slip polymer that improves performance when the sun is not at its zenith.

Wind power is an area that has been modified a great deal since Energy Observer’s launch. After experimenting with vertical wind turbines and a traction wing, the catamaran now carries two Oceanwings, which are 32m² rigid wings developed by VPLP and inspired by their learnings from the America’s Cup. 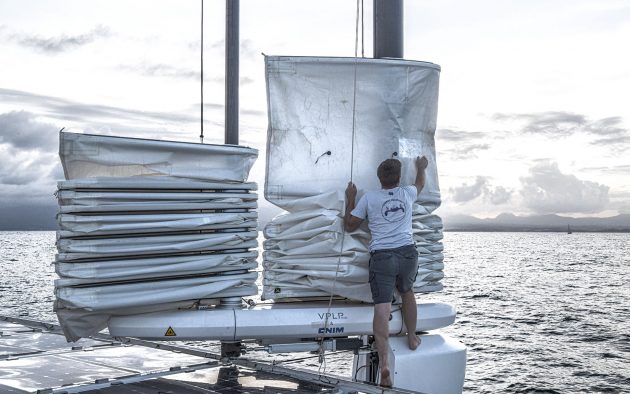 The Oceanwings are made of Hydranet, a woven Dyneema sailcloth, and slide down the masts to reduce sail. Photo: Energy Observer Productions

The Oceanwings have been developed with the ultimate aim of making maritime transport less polluting, and Energy Observer is an ideal experimentation platform to develop the system.

Nearly twice as efficient as traditional sails, the wings can be used to either increase speed or reduce power consumption as a complement to the electric motors. The wings also allow Energy Observer to utilise its fourth source of electrical production, hydrogeneration from the propellers when the wind is favourable.

The basic Formule TAG hull platform was light, at just 15 tonnes. Although the catamaran no longer carries its original rig, the additional batteries, motors etc increased the final displacement to 30 tonnes. It was therefore necessary to increase the buoyancy of the hulls, achieved by grafting on a second skin, adding volume below the waterline.

In addition to adapting all of these emerging technologies to the corrosive marine environment, the Energy Observer team’s expertise lies in the fine management of these different energies, optimising efficiencies. 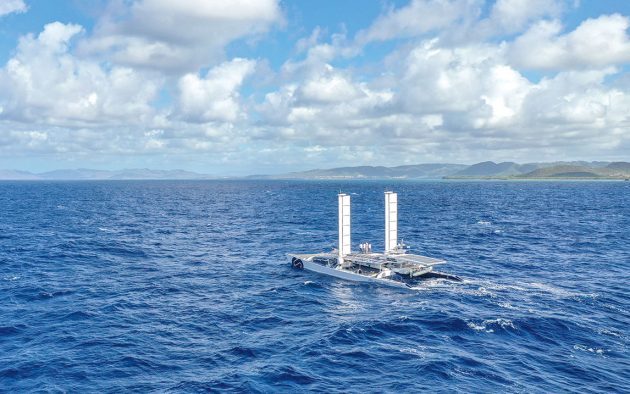 During coastal passages, Energy Observer has been making an average speed of 4.5 knots, but 6.34 on a transatlantic, with peaks of 10 knots. Photo: Energy Observer Productions

That ranges from selecting the most efficient mode of propulsion or electrical production at any given moment, to fine adjustment of the wings or the pitch of the propellers.

With all innovation, there’s often a big leap from theory to practice, but the project is creating the data to prove the concepts.

Energy Observer has been touring the world’s oceans since 2017. In March 2020 it set off on its most recent voyage, which will take in the Tokyo Olympics and the Dubai World Expo in 2021, before returning to Paris for the 2024 Olympics.

Over the 2,134 miles sailed so far on the current trip it has averaged speeds of 6.34 knots, with 83% of the energy produced used for propulsion or navigation, and only 17% used for the domestic systems used by the crew of five on board.

Over the last eight months, solar power has accounted for 56% of the on-board production, hydrogen for 7% and Oceanwings for 37% of the equivalent consumption of the engines saved.

Hydro-generation has been little used in the inter-tropical latitudes, but is expected to be used more in windier regions.