‘I know my boat. I know the waters I’m entering. I know my limitations. Still this situation is dangerous and can easily take a very bad turn. I don’t encourage anyone to try this. It will be at your own risk. Storms are dangerous.’ Norwegian solo skipper Erik Aanderaa is clear at the opening of his most popular YouTube video, Encountering Storm Force 10.

He doesn’t want people to emulate what he is doing.

The 37-year-old has spent years slowly increasing his experience of sailing in heavy weather, crossing the North Sea in the middle of winter aboard his Contessa 35, Tessie, to test his ability, the boat and his equipment, all of which will prove invaluable when he sails to Greenland in July.

Like many offshore singlehanded sailors Aanderaa wants to know how his boat will handle in different conditions and make sure his seamanship skills are as honed as possible before any big adventure.

The legendary Jean-Luc Van den Heede used a similar strategy ahead of the 2018-19 Golden Globe Race, spending a winter season sailing his Rustler 36, Matmut, out in Biscay as preparation for Southern Ocean storms.

Based on his Biscay experiences, the French solo skipper lowered the yacht’s mast by 1.5m. He believes this prevented the yacht from dismasting, after his end-to-end pitchpole in 11m seas, 1,900 miles from Cape Horn.

But is deliberately sailing out into a Force 10 taking it too far?

‘Fear is only produced by the lack of knowledge. To get knowledge you will have to face your fear,’ defended Aanderra. ‘Sailing in over 50 knots downwind, offshore is touching the limit for what the boat can safely take. But now I know how it is.’

Aanderaa started sailing when he was 11 years old. He had asked his father for a small motorised dinghy but instead received an 11ft sailing dinghy, similar to an Optimist, which he regularly sailed in the inshore waters of Haugesund on Norway’s west coast. 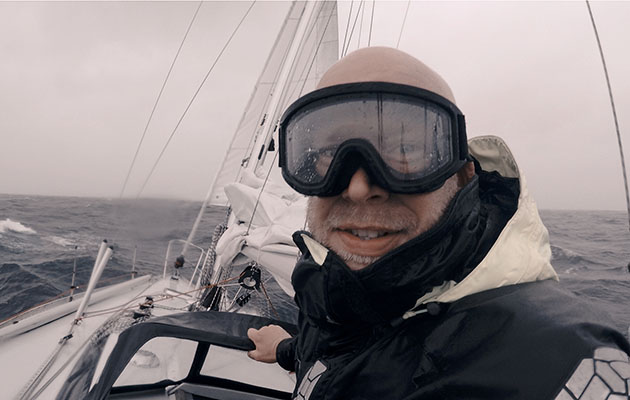 Goggles are an essential bit of kit when sailing in rough seas. Credit: Erik Aanderaa

‘I was very negative to start with, but after some trying and failing I got to grips with sailing and one day I just sailed away without knowing how to get back. I got further and further out. My dad had to come and get me with the neighbour’s boat. From that moment I knew sailing was my thing and I became addicted.’

At the age of 14 he progressed to a 15ft Mørebas Duett, which ‘got me learning sailing in stronger winds and got me even more obsessed.’

‘I tried the Duett once or twice a little offshore and that probably triggered much of my sense for adventure,’ noted Aanderaa.

His passion also extended to his career choice. After leaving school, he became an apprentice-on-deck on a cargo vessel. His wage was soon put to good use, buying a 22ft Maxi 68, which gave him the freedom to go further afield.

At the age of 22 he accepted the position of first officer on a North Sea supply ship. The extra income allowed him to start looking for a new yacht.

He saw an advert for a 1976 Doug Peterson-designed Contessa 35, built by Jeremy Rogers in Lymington.

Heavily built, with a deep cockpit, manageable sail plan and short distances on deck, it was love at first sight and he bought Tessie on the spot. ‘Then the real fun could start,’ recalled Aanderaa.

In 2006-07 he sailed Tessie solo from Norway to Malaga ‘just to see how the boat and I worked together’. 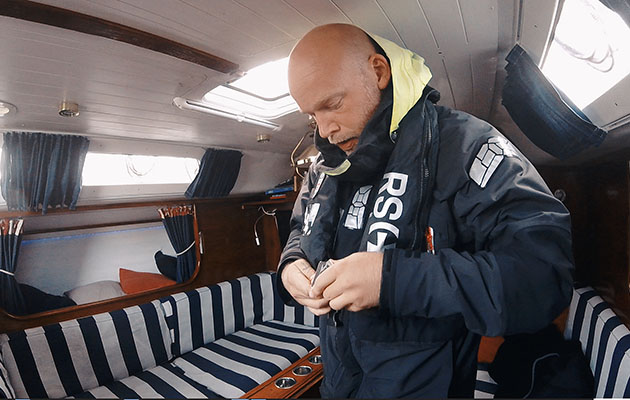 The voyage also cemented his love of winter sailing in heavy weather. ‘Spain was hot. I stop functioning properly in very hot weather and didn’t enjoy it. I missed the cold North Sea weather, so I turned around and headed back to Norway,’ explained the adrenaline junkie.

‘I’ve always dreamt about winter sailing in the North Sea. Everyone said it was dangerous and that only stupid people would try it. I was told I would put the lives of rescue crews at risk. But I knew this was coming from people without proper experience.’

It wasn’t all plain sailing. In 2011 he ran aground on rocks outside Haugesund while sailing in sub-zero conditions, severely damaging the rudder. Lessons were learnt though. At the time, he had been wearing cotton gloves which, once wet, failed to keep his hands warm.

‘I lost the feeling in my hands and arms and couldn’t steer properly. I went down to get warm and I ended up in a state of hypothermia and forgot how close to land I was. The next thing I had run aground breaking the rudder to pieces, ending up on a rock out of the water.’

Tessie was pulled off by a rescue boat and, six months later, Aanderaa was sailing again.

He also began videoing his experiences, and posted his first YouTube video, Sailing in Storm! on his Erik Aanderaa channel in February 2015.

Like his Force 10 post more than four years later, he was sailing from the island of Røvær to Haugesund.

January 2017 was a momentous moment for Aanderaa when he achieved his dream, sailing across the North Sea in winter to Lerwick in Shetland for the Up Helly Aa Viking festival, which has become ‘part of my life’.

‘The weather was perfect with 34 knots of wind to my port beam. It was beautiful to see and feel the power of nature pushing me towards Shetland,’ he says.

He repeated the voyage in 2019 and plans to sail there again in 2020. ‘The cold, heavy weather and the thought of being the only sailboat crossing the North Sea creates the perfect challenge,’ responded Aanderaa when asked why he sails in conditions which would leave most sailors remaining in port.

He accepts there is risk involved, but believes preparation can significantly lower that threat. 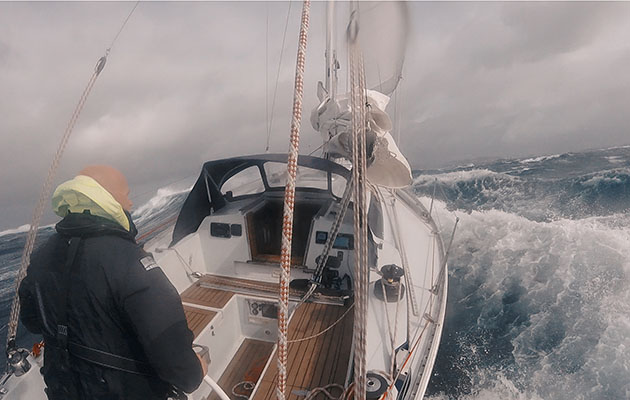 Erik believes that by seeking out heavy weather and experiencing it, he will hone his seamanship skills for challenges such as Greenland. Credit: Erik Aanderaa

‘It’s risky and challenging, and it puts you in survival mode which keeps you focused 24/7. I have all the necessary safety equipment for most situations, but it is more important to go prepared enough to minimise the chance of anything happening.’

‘I think of everything that could happen and then make sure I’m proactive enough to get ahead of the situation, taking sailing gear, clothes, enough diesel or all types of safety equipment for evacuation and survival until being rescued. I do a lot of heavy weather sail training whenever I can to keep me confident for the next ride,’ explained Aanderaa.

Tessie is well set up for solo offshore sailing with a Hydrovane windvane, a third reef in the main sail and a Volvo Penta D2-40 engine to allow for quick battery charging.

He plans to buy a new sea anchor and an offshore liferaft ahead of sailing to Greenland.

But despite regular heavy weather training and equipment, does he ever think the North Sea in winter could be too inhospitable for such a small boat?

‘Everything has its limit. Of course, there could be a point when it is so bad that it is too much. But with care and respect for the weather, it’s amazing what these boats can handle.’

Erik’s adventures can be followed on YouTube at: youtube.com/erikaanderaa

I always sail with 10 pairs of gloves, underwear, socks and hats. I’ve got two sets of wet weather gear so when I get soaked I can change into dry gear. Tessie is fitted with a Webasto 4Kw diesel heater, which is on full power for as long as needed, 24/7 if necessary.

Ensure you eat and drink enough

Being tossed around in heavy waves while sailing and walking around all over the boat to film takes a lot of energy, so I eat all the time. If I get hungry and my blood sugar crashes then I get easily tired and lose concentration, willpower and struggle to stay motivated.

I eat cold and hot canned food, lots of fizzy, sugary drinks, chocolate and other energy-rich food and drinks. If I feel my blood sugar dropping then I can eat up to 1kg of food in one go and drink half a litre of sugary drink and after five minutes I’m back at full capacity again.

Learn how to let the boat efficiently steer itself

I tested a lot of different windvanes and went for the Hydrovane because you can literally plug it in and go. As long as the main rudder is trimmed correctly along with the sails, the boat just goes.

If a really big wave knocks it off course, it might need some adjusting but it is amazing how much it can take if it’s correctly trimmed. It may take a couple of hours sailing to get it just right.

Only use sufficient sail power

Don’t use too much sail. I’m very careful when sailing solo not to have too much sail out otherwise the boat just won’t steer itself and running up and down re-trimming will just exhaust you in the long run.

The right amount of sail and sailtrim will give you all the speed you need and bring you safely to port.