Ester is a revolutionary Swedish racing yacht that was built in 1901, sank in the 1930s, and raised in 2015. In 2019 she completed a four-year rebuild to race again

The phrase ‘ahead of its time’ is over-used, but in the case of Ester, a remarkable 50ft racing yacht built in 1901, it couldn’t be more apt. For a yacht that was drawn 120 years ago by Swedish designer Gunmar Mellgren, Ester bears a striking resemblance to an IACC yacht, with that flying bow and full-length toerail, while below the water she had a modern fin keel and spade rudder.

The similarities are not just aesthetic; Ester was built with the same obsessive focus on weight reduction as any modern America’s Cup boat – albeit out of oak, mahogany and steel – and a similar disregard for cost. Her original build cost 15,000 Krona – over half a million pounds today.

Ester was built to win the Tivoli Cup, a sailing competition between Sweden and Finland held at Sandhamn, in the Swedish archipelago. Bo Eriksson who, together with Per Hellgren, found and rescued the yacht, explains: “Competition between Finland and Sweden – nowadays it’s in ice hockey – but it’s always life or death! It was a big thing here. Ester was built to win one race, and they spent a lot of money – it was very, very expensive at that time.” 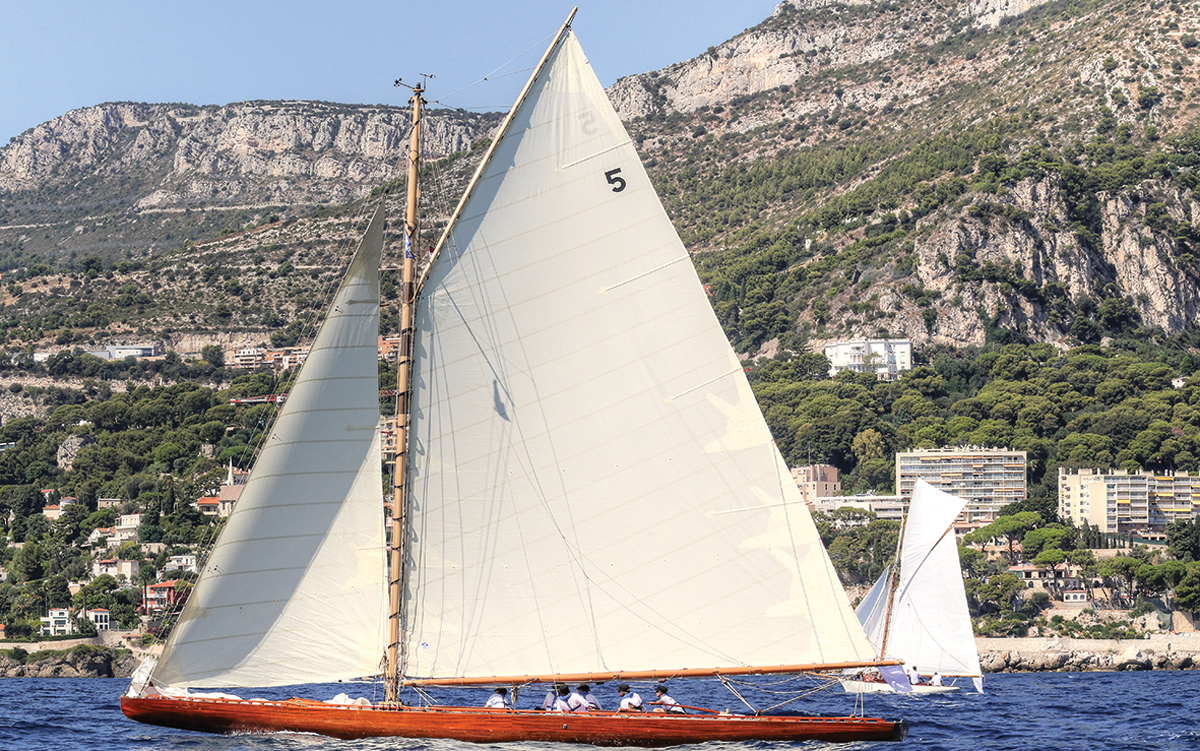 The rivets used are hollow and were manually drilled out. Some 17kg of metal was saved by drilling holes in rivets and screws

Ester won the 1901 Tivoli Cup, as well as pretty much everything else she entered that decade. Even by the later 1930s, having been resold and modified several times, she was still highly competitive. But one day she sank, and a piece of yachting history was presumed lost forever.

Bo Eriksson, a classic yacht aficionado, read about the legend of Ester and developed a fascination with the yacht, even hand-building a small model from drawings and photographs. “We were thinking of building a replica, but that was just a dream. The boat was for sure gone, it wasn’t in my head that we would find it,” he recalls.

However, in a bizarre twist of fate, a fisherman told him of a yacht which had caught fire and sunk outside Örnsköldsvik, in north-west Sweden, in the 1930s. Eriksson realised it could be Ester – and it was less than 2km from the front of his own house. After several years and diving explorations, the wreck was located. Ester had settled upright on the mud, rig in place, in nearly 50m of water. 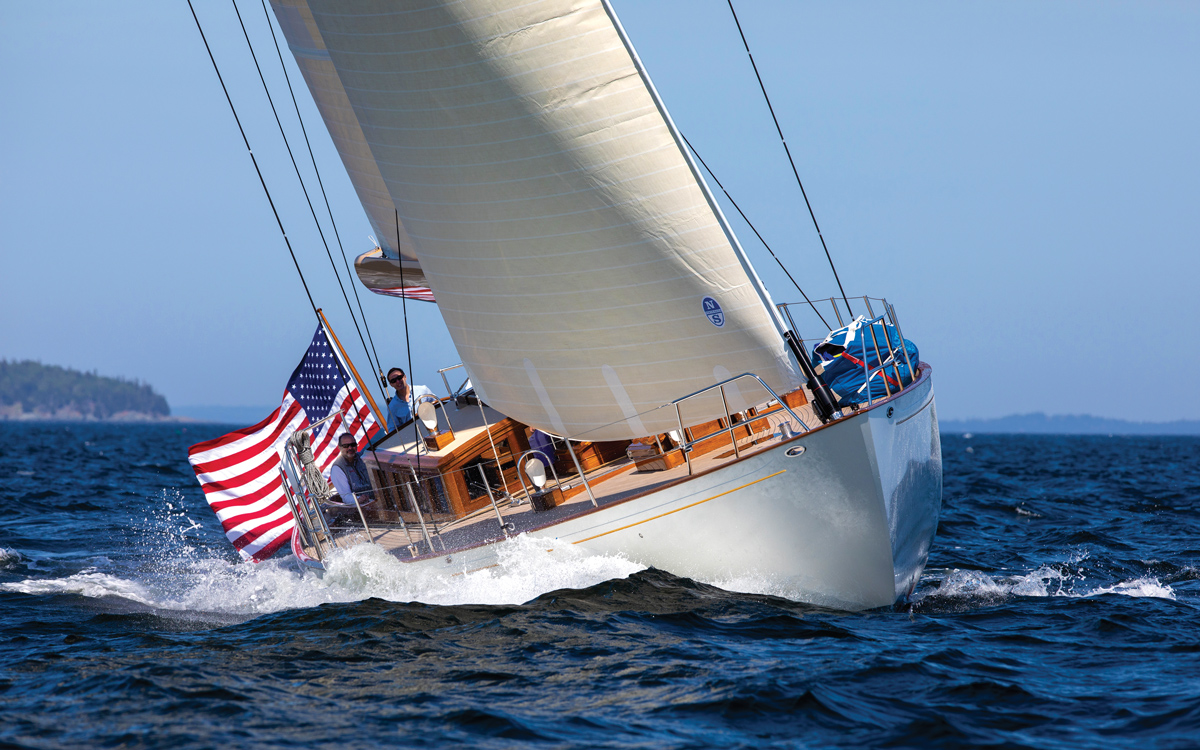 When approaching Anna moored at the dock, it’s hard to immediately tell whether she is a restored classic or a… 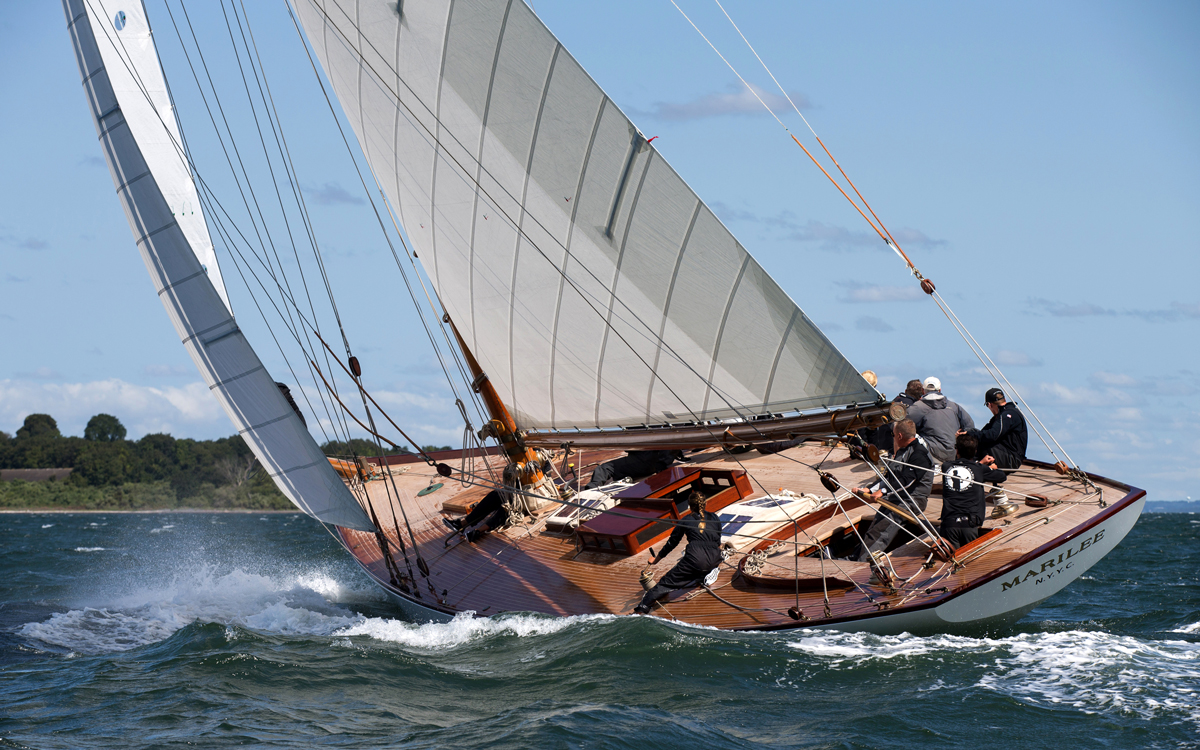 Raising the yacht was no small task; specialist divers were deployed, and the water was so murky that her exact location was only realised when one diver hit his head on her overhanging bow, having felt his way along the seabed in search of the yacht. Compressed air had to be blown into the mud to free the keel and hull.

Ester’s survival is remarkable, as she captures a moment in yachting history when the very best designs were reaching far ahead of the materials and technology available at the time. Ester featured radical build techniques. She was built two years before the Wright brothers made their first flight, but is constructed using hollow rivets on a metal frame for weight reduction, a technique adopted by the aeroplane industry. She displaces just 3.5 tonnes, of which 1.5 tonnes is in the keel.

“She is one of a kind,” explains Eriksson. “There were other designers designing this kind of boat, but they existed for quite a short period, only up to about 1905. They were ruled out because they became so fragile, kind of like the America’s Cup today, the yachts were going in the wrong direction so they changed the rules. And they were so lightly built so they didn’t last.” 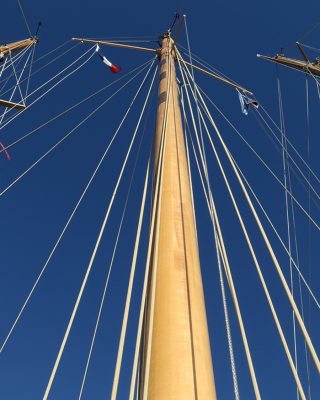 Her gaff rig was restored to its original height after being shortened in the 1930s. The new mast was designed by Juliane Hempel with measurments taken from the original

That Ester did survive is testament to what Eriksson describes as the ‘genius’ of her designer Gunmar Mellgren, and the craftsmanship and attention to detail applied during her build. “Every detail is on purpose,” he explains. “And all together small things, tiny deck details and reinforcements, if you take them out separately each part is not so strong but together as a composite it’s very strong.”

Ester was raised in good shape. The late naval architect and yachting historian Theo Rye, who did some early design work on the project, measured her after she was lifted and was astonished to find that there was less than 7mm difference between port and starboard sides after nearly 75 years at the bottom of sea.

This is even more extraordinary considering that when Ester was originally launched, a reporter who went to see her was surprised that her lines remained true just three weeks after launching, so lightly built were similar yachts of the time.

The salinity of the Baltic Sea may have helped preserve the wood. Nevertheless, as she was raised and the wood began to dry, millimetres of planking began to peel away. Ester was going to need a complete rebuild.

The boat was carefully set up in Eriksson’s yard. In order to prevent the timbers drying out too quickly, she was placed in a shed with a bare earth floor to maintain humidity levels that would suit the yacht – but in freezing Arctic temperatures that made the restoration project even tougher for the boatbuilders.

The boat was rebuilt, piece-by-piece. The original steel keel fin was kept, but very little else. “The boat is composite built with a mild steel frame, but the frames were totally corroded away, so we made new templates and new frames and put them into the whole hull, bolted them in with the planking,” Eriksson explains. 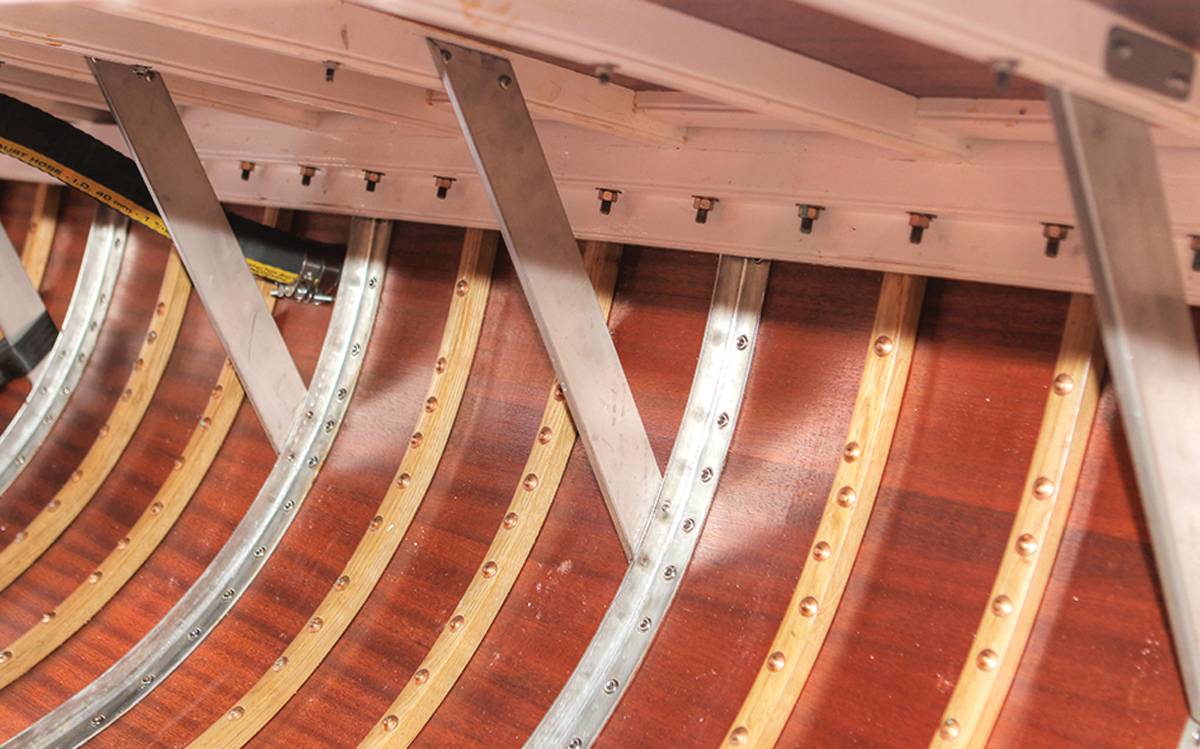 “Then we made new deck beams and put them together with the new steel frames. We were cross-bracing the whole thing to stabilise the hull. Then we took the keel out, put a new keel plank in, and then we started to change the hull, plank by the plank.”

Materials were kept authentic wherever possible – stainless steel was used to upgrade the mild steel of the day, and the planking is glued together more effectively than she was. “Otherwise it’s exactly the same: mahogany and oak, and Swedish pine, and spruce or pine for the rigging,” recalls Eriksson.

“The planking is all the same dimensions, she has only seven planks per side, the garboards are 600mm wide, and it’s a single scarf joint between the planks each side. We had some fantastic 12m long mahogany planks, so that’s made a small difference. We had a better source of materials, so there was more scarfing in the original hulls than there is today.” 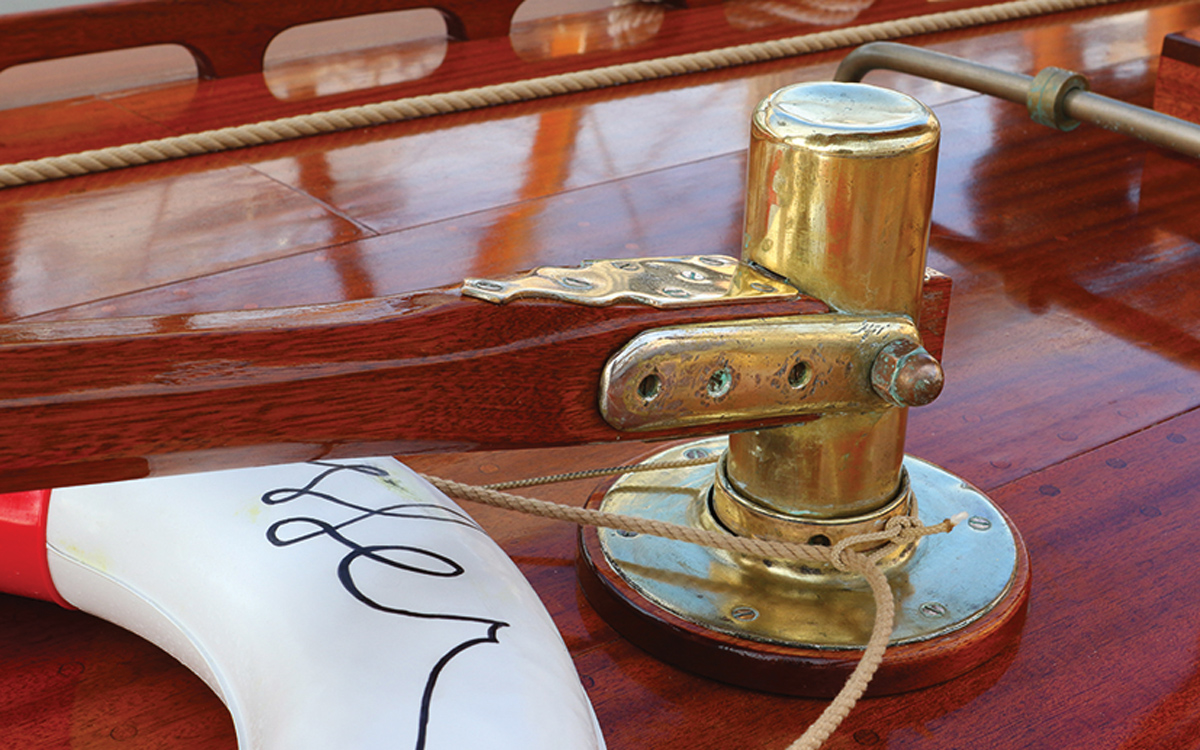 The original bronze rudderpost was restored for the tiller fitting

Other elements have been kept as the original, but are strikingly modern. “When I looked at the old rigging, I was surprised it was so simple, with wire loops around. It looked so old fashioned, almost like a fishing boat,” says Eriksson.

“But on second thoughts I was thinking this is absolutely genius, it’s like a modern racing boat – they have Kevlar loops or Dyneema loops on the rigging, and it’s exactly what they were doing in 1901. If you have a metal fitting on the mast it’s a breaking point on the mast. If you have a wire loop around it’s much softer, safer and lighter.”

Four years after she was raised from the mud, Ester was relaunched in time for Monaco Classic Week in 2019, also competing at Les Voiles de St Tropez, where sailing her proved worth the two-decade wait for Eriksson. 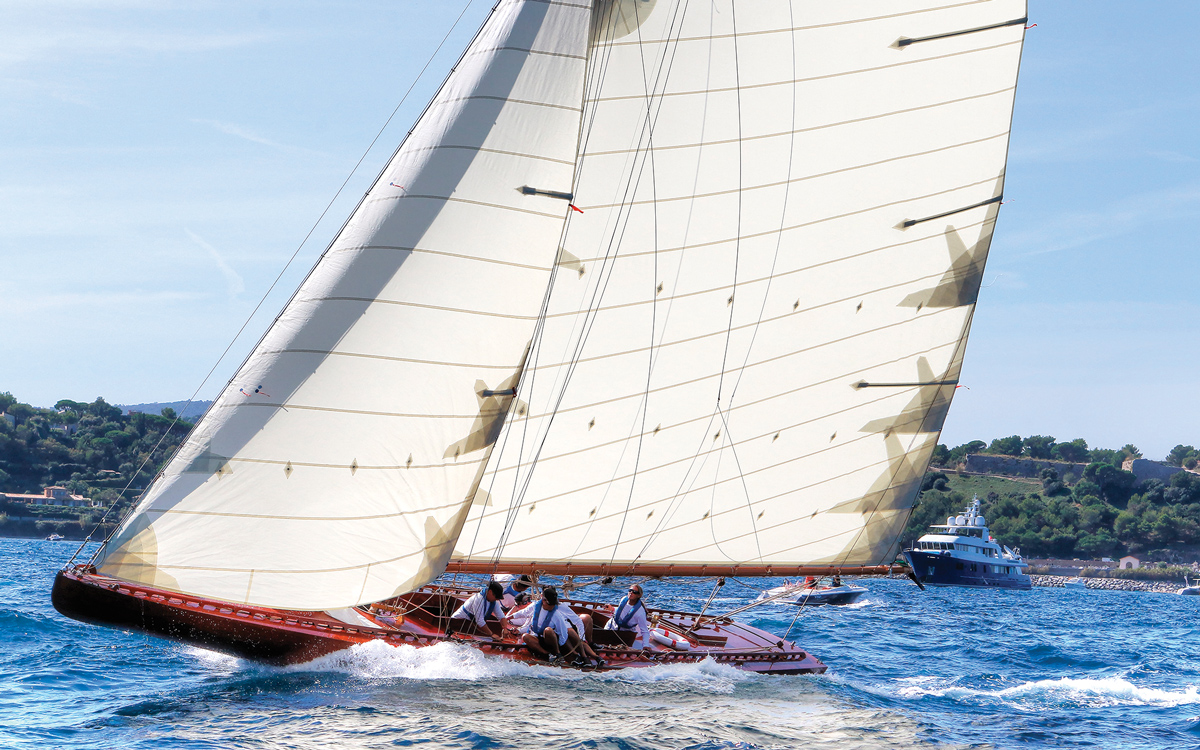 Ester racing once again at St Tropez, where she won on the opening day

“The boom is only 50cm above the deck, so sailing her is quite physical. You have to be on your [toes] the whole time, and diving under the boom when you’re tacking and gybing. So after five or six hours you’re quite exhausted. But at the moment it’s like seeing a Ferrari in first gear. It will take years to find the full potential of the boat.

“For the first season we’ve put on a minimum of sails because we didn’t know how she would behave, so we were under-canvassed. But on a couple of days when we had wind that suited our set up we were really flying. She’s very stiff. And as soon as you come off the wind, she’s like a hot knife in butter: she’s off.”

The post Ester: The classic Swedish racing yacht that came back from the dead appeared first on Yachting World.