Evrika is an S&S Swan 65 with a rock’n’roll past, which has been restored in preparation for the 2023 Ocean Globe Race, reports Sophie Dingwall

Evrika got her name from Archimedes, the ancient Greek mathematician who discovered the basis of water displacement. Legend has it that when Archimedes noticed the level of his bathwater rise as he got in, he realised he had discovered a way of calculating volume. In his excitement, he is said to have run through the streets naked shouting ‘Eureka!’ (pronounced ‘evrika’) literally meaning ‘I’ve found it’.

It was a Greek owner who originally commissioned the Swan 65 ketch Evrika to be built in 1982. Sparkman & Stephens designed the Swan 65 in 1973 to meet the increasing demand for large, safe and luxurious sailing yachts.

The 65s were the largest GRP construction yachts on the market at the time and made a big impact, not only thanks to their beautiful lines and teak decks but also their many achievements in racing, including Sayula II’s victory in the Whitbread Round the World Race in 1973-74. Most of the 41 Swan 65s built, including Evrika, were designed with a ketch rig for world cruising, although four were later delivered with a sloop rig. 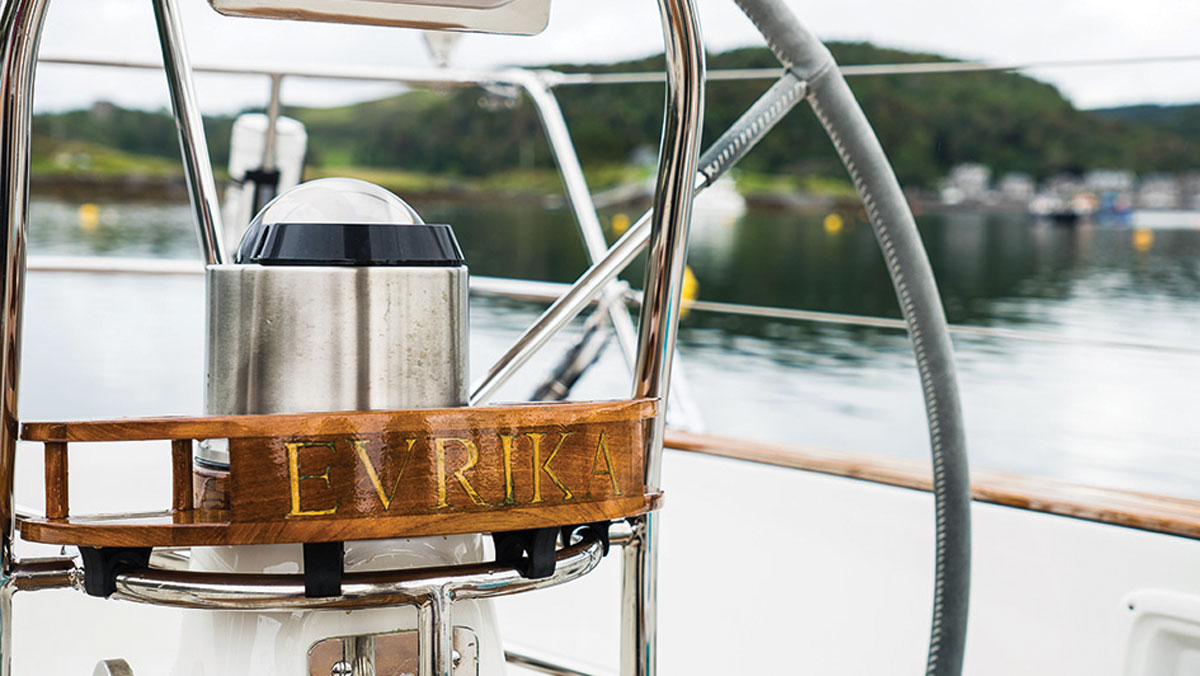 A moment of calm: the wheel and pedestal, complete with wooden inlay of Evrika, are all original from 1982

Tragically Evrika’s original owner passed away before the yacht was finished, but it was inherited by his daughter. She put together a competitive crew and Evrika embarked on a busy race programme throughout the 1980s, including winning the Swan Cup.

When Evrika’s racing days came to an end, she was bought by the Pink Floyd keyboardist Rick Wright, and settled into a quiet life cruising Greece and sailing the Mediterranean, as well as sailing across the Atlantic to the Caribbean. For Wright, this was his downtime from being part of one of the biggest bands in the world, and became his favourite place to escape and spend time with his family, particularly daughter Gala.

Wright fitted a keyboard and sound system down below, with the intention of recording music but reportedly became so immersed in the sailing that composing often fell by the wayside. Nevertheless, sailing his Swan undoubtedly provided inspiration.
One unusual crewmember had permanent residence on board at the time: Jakob the parrot was inherited by Wright with the purchase of Evrika and in true pirate style roamed the boat freely, only decamping to his cage at night. 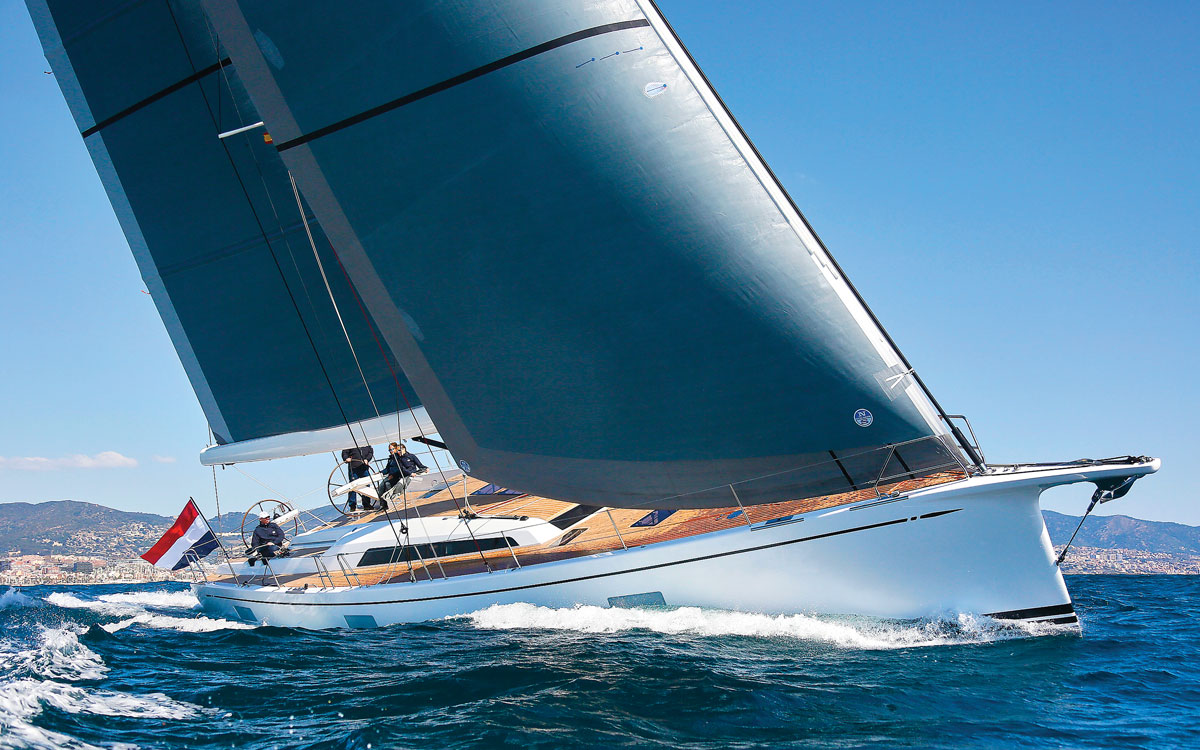 If it hadn’t been for the original Swan 65, Nautor’s Swan might never have become the famous name it is… 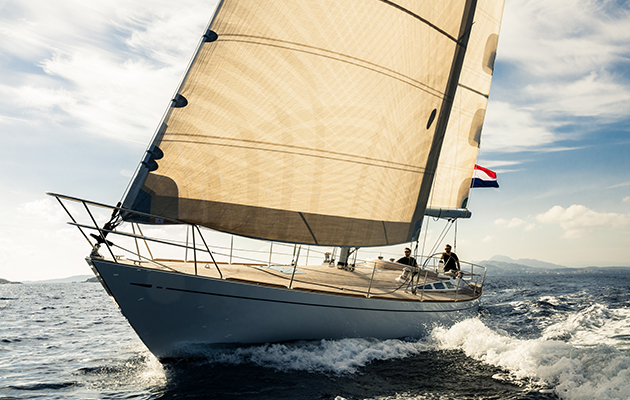 Can you improve on perfection? The Sparkman & Stephens-designed Swan 48 is widely considered to be one of the most…

In 2008, plans were made for Wright and Gala to sail across the Atlantic eastabout together and sail Evrika to Wright’s new house in Ibiza. But for Wright it was too late, and he passed away from cancer in September that year aged 65. Gala went on to complete her first Atlantic crossing, but Evrika was instead brought back to the UK and painfully put up for sale after 25 years of ownership.

Evrika’s new owner was a Swan devotee and ardent racing sailor, who had chartered and raced a Swan 65 for several years. He bought Evrika as the perfect excuse to eschew racing and spend genuine time with his two teenage daughters instead.

The new owner gave the 30-year-old Swan a significant refresh, including all new plumbing and wiring. He was keen to keep the original features, including the Baby Blake toilets which were infamous for leaking, but with some attention and a new fresh water flush the heads were once again functional and have retained their traditional style. After a year of refit, Evrika returned to cruise the waters of the Med and Caribbean for many seasons of family holidays. 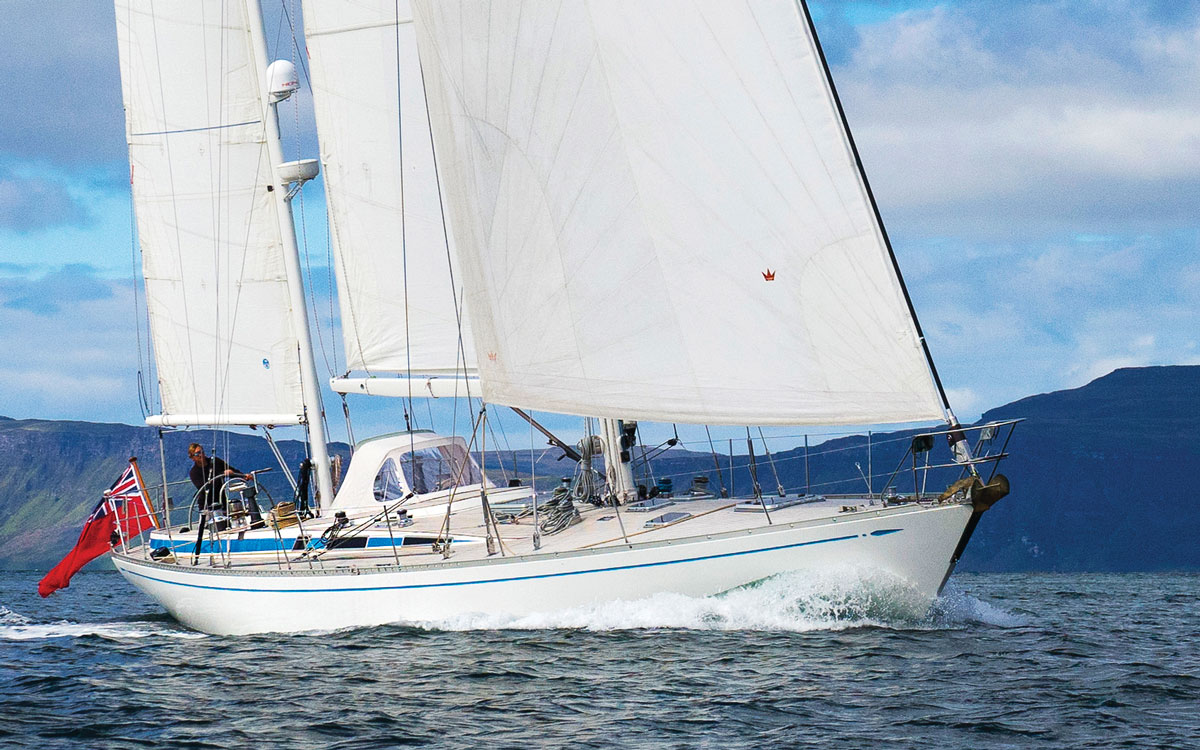 In 2017 Evrika was again put up for sale as the owner’s daughters had grown up and their interests lay firmly ashore, leaving Evrika without purpose. The yacht sat on the hard in Lymington for two years awaiting its future. But in June 2019 those plans changed with the announcement of the 2023 Ocean Globe Race.

Fifty years after the inaugural 1973 Whitbread Race, the Ocean Globe Race will set off on a similar route in celebration of its half century. This new commemorative race was the excuse Evrika’s owner needed not to sell. All previous resolutions about not wanting to race were forgotten, and Evrika had a new role.

Driven by the Ocean Globe Race, there was a new brief for a second refit, which began in July 2019. To prepare Evrika for this once in a lifetime adventure, the main objective was to make her watertight. The entire deck was stripped, layers of fibreglass added, then filled and faired before a new teak deck was laid. All the stainless steel winches and deck fittings were removed and machine polished. The original spars were sanded and painted, and Evrika was fitted with new running and standing rigging. 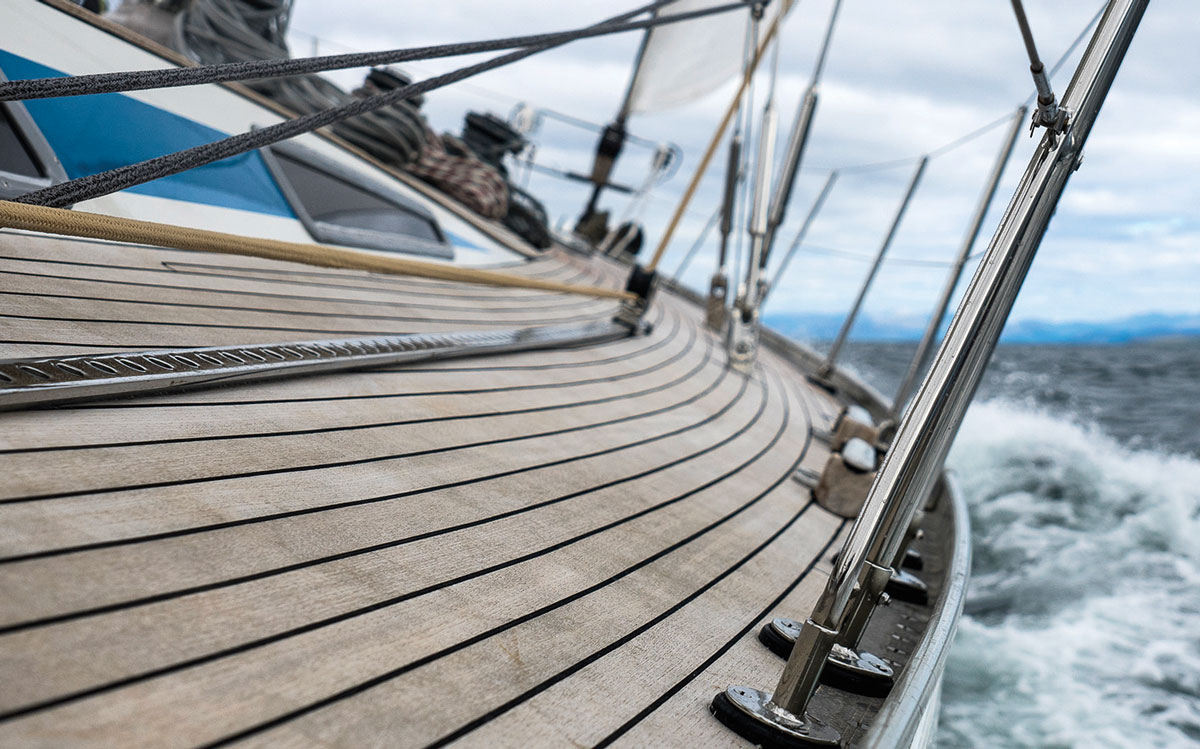 The forward cabin underwent some drastic layout changes: originally it consisted of pipe cots either side, separated in the middle by the anchor chain and stowage for sails, lines and equipment. A new double berth was fabricated and the windlass moved forward, allowing the chain to run straight into the separate bow locker, and keeping the forward cabin saltwater free for racing in the Southern Ocean.

The rest of the interior layout is original, down to the brass fittings and fixtures. Evrika has two cabins with their own heads just abaft the forepeak. The saloon is spacious, with additional single bunks on each side. There is a traditional U-shaped galley, with the chart table opposite, snugly tucked in the starboard corner. Furthest aft is the owner’s cabin, which has a double bed, desk and separate heads.

Below decks the varnished interior is welcoming and the newly added heater means even on the coldest and dampest of days it’s now cosy. Care has been taken to ensure all changes are in keeping with the yacht’s original style and materials, treating the project as a restoration opposed to renovation. Twelve months, thousands of man hours later and Evrika is straining at her lines to clock up the miles again. 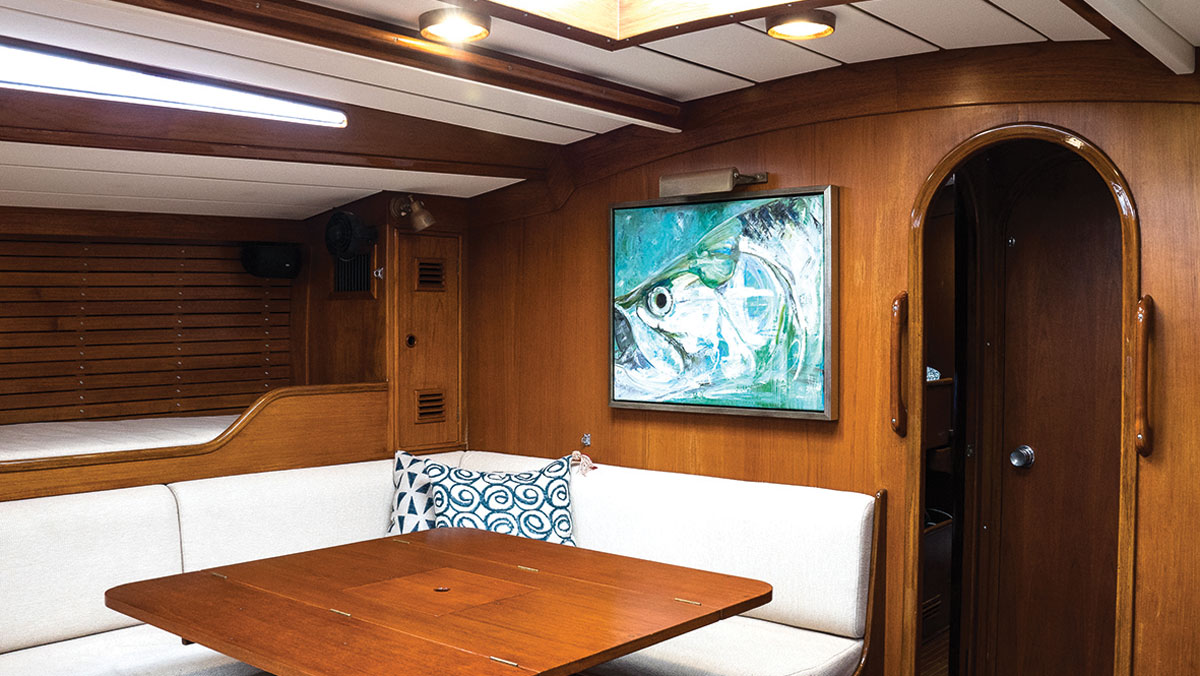 The cosy saloon, complete with original brass light fittings. There are a few holes in the saloon ceiling, pecked out by Jakob the parrot

The owner has cruised up the Irish Sea this summer, all the way to the Hebrides, and will sail across the Atlantic to the Caribbean this winter. Evrika’s past meets her future, as Wright’s daughter Gala is planning to once again be on board for the crossing.

In rough seas Evrika is solid and safe, and easy to manoeuvre with just a couple of crew even when overpowered. “I’ve worked on four Swan 65s now and I’d not rather be doing the race on any other boat,” Evrika’s skipper Chris Watts told me.

“In terms of the restoration and making her ocean going, there was relatively little to do as that’s what she was designed for. Everywhere we go we get attention and admiration. I have no doubt in my mind that she’ll be in her element in the Southern Ocean and I’m really looking forward to it.” 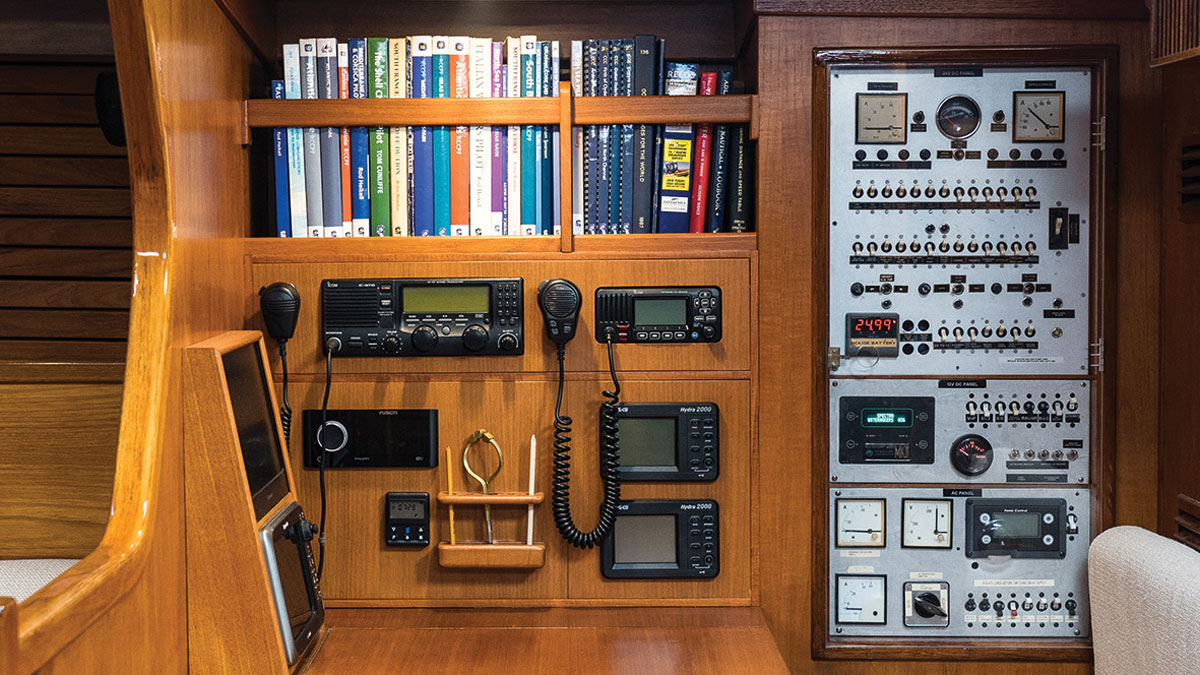 Music in her soul

Like its single-handed predecessor the Golden Globe Race, the Ocean Globe Race is a ‘retro’ race, with no computers, satellites or GPS. The competitors will be doing it the old-fashioned way using sextants, true grit and determination. Naturally this has impacted on the restoration. No new electronic or navigation equipment has been fitted or upgraded, instead weather routing equipment they would have used in the Golden Globe Race will be added, such as a paper-print HF radio weather fax.

There’s still a long way to go towards becoming race ready, from adding a hydrovane to the obligatory safety requirements. However, one of the oddest – and most important – items on the race’s banned list is any form of digital music. This boat has music in her soul and so the task of recording music onto cassette tapes – which are allowed – will be a high priority in the race preparation schedule. 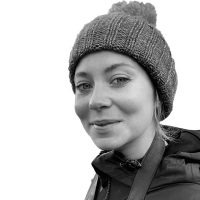 Sophie Dingwall is a photographer and storyteller who has sailed on everything from marine scientific expeditions to racing yachts.

First published in the December 2020 issue of Yachting World.

The post Evrika: This classic Swan 65 has been refitted for the 2023 Ocean Globe Race appeared first on Yachting World.