Banque Populaire is one of the world’s most experienced and successful sailing teams, and was the force behind Armel Le Cléac’h’s 2016 record-breaking Vendée Globe victory, they now have a new Ultime trimaran in the form of Banque Populaire XI.

Only a year after her launch, the previous giant trimaran Banque Populaire IX crashed out of the 2018 Route du Rhum in spectacular fashion, having already capsized once before, and was declared an insurance write off after being towed in broken chunks back to shore.

Much has been learned from the experience with that boat and the new vessel incorporates radical improvements that put it a big leap ahead of her predecessor in terms of both performance and, more importantly, safety and reliability. 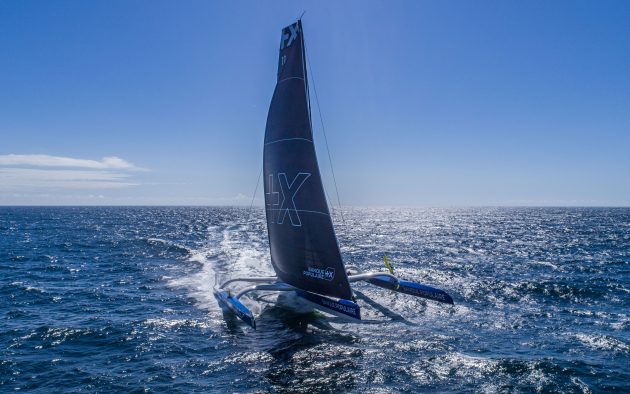 Banque Populaire Xl is the result of a colossal 150,000 hours of design and construction
work. Photo: J Lecaudey/BPCE

Like Banque Populaire IX, this boat was conceived with a single objective in mind – for one person to sail round the world faster than anyone else. The record to beat is 42 days, 16 hours set by François Gabart in 2017.

Francois Gabart, currently the fastest man to sail solo non-stop around the world, has unveiled his latest trimaran, the radical… 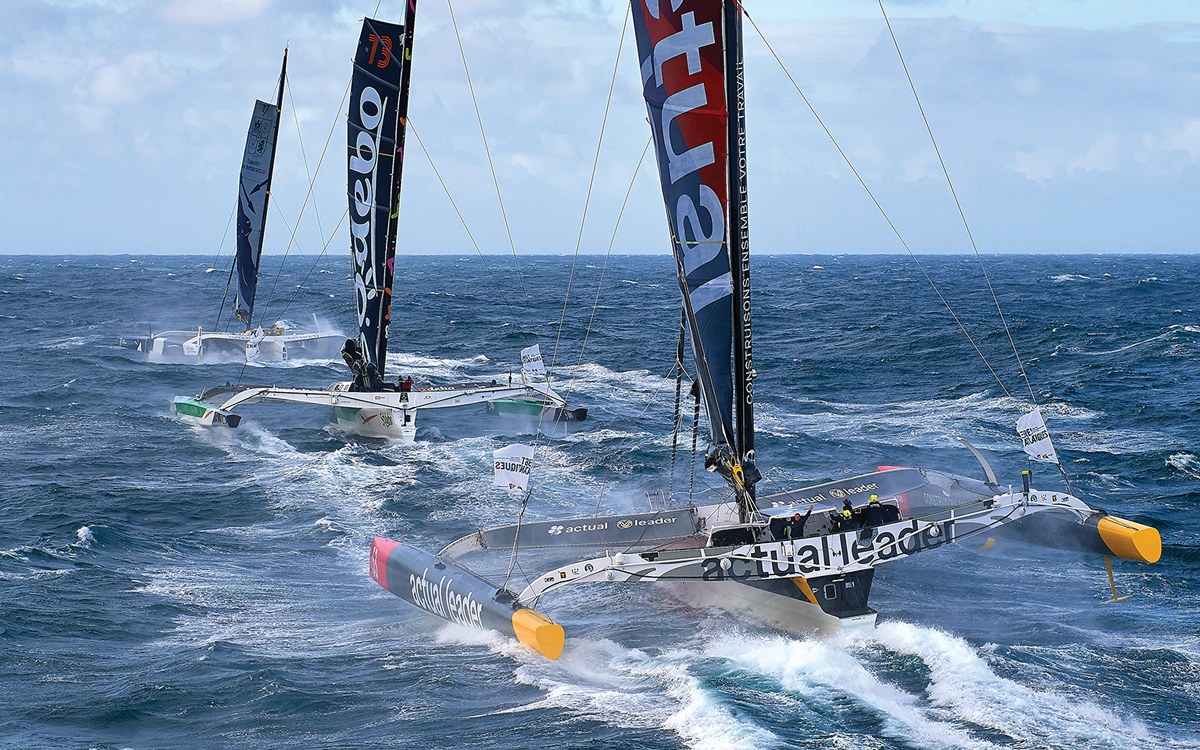 The Ultim class has announced the first single-handed race round the world for giant multihulls, the Solo Ultim World Tour. …

Structural failure of a cross beam failing after a collision with an unidentified floating object (UFO) was the cause of the loss of Banque Populaire IX.

Her successor, Banque Populaire XI, benefits from an entirely new concept for structural engineering of the cross beams, plus considerable work on both the foils and the sail plan to make foiling more stable over sustained periods. 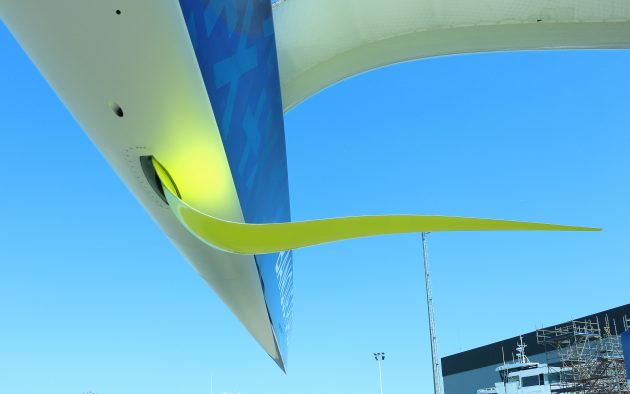 The foil on the starboard ama – these are almost twice the size of those on Banque Populaire lX. Photo: Rupert Holmes

“We have worked a lot on the foils, daggerboard and rudders, as well as with the sails, to go fast and be stable,” Clément Duraffourg, the team’s head of data acquisition and analytics, revealed. As a result the new boat’s foils are almost twice the size of those of the previous boat.

A further important plank in the project is a state of the art simulator bought from Emirates Team New Zealand. While the boat was in build this enabled the team to spend more than a year trialling numerous different parameters.

As a result, Duraffourg says, even before the boat hit the water they had good base settings for the foil adjustment across a wide range of conditions. Given the interplay between the main foils, plus the T-foils on the centreboard and each of the three rudders, this task is extremely complex, yet absolutely critical to success. 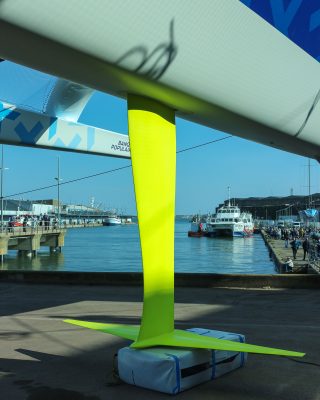 “The bigger foils, including the rudder T-foils, make the boat more stable when flying and add righting moment, which means increased safety,” skipper Armel Le Cléac’h told me as the boat emerged from the shed at CDK Technologies in Lorient.

This makes it easier to achieve high average speeds, by staying up on the foils for longer, without potentially dangerous and slow splash-downs. “The foils will continue to function up to around 45 knots of boat speed, and the simulator tells us the boat should be able to make 50 knots,” le Cléac’h added. “But then you start having problems with cavitation.”

However, achieving these kinds of high top speeds was never a priority. Instead, the aim is to achieve a consistent average speed without significant peaks or troughs. “For me a good 24-hour run would be staying close to an average speed of 35 knots,” Le Cléac’h says. “That would be a super day.”

A key reason that top-end speed potential is academic with these boats is that the upper end is determined by sea state, including swells that may be generated hundreds of miles away, and not by theoretical performance in flat water.

The importance of this was brought home for me during a sail on Giovanni Soldini’s foiling MOD70 Maserati off Lanzarote in 18-22 knots of true wind. 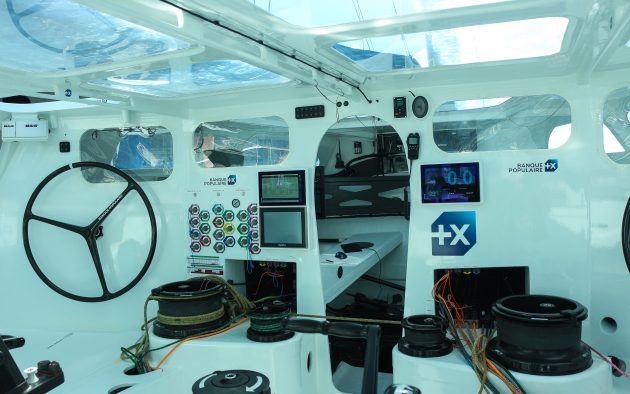 All sail handling is carried out from the protected aft cockpit, which has a wheel each side. Photo: Rupert Holmes

We occasionally hit speeds of 38 knots, but never sustained that pace for long before ploughing into the back of the wave ahead and crashing down off the foils, slowing markedly and fire hosing the whole boat with torrents of water.

It was quickly obvious that the first key to faster and safer passages is to minimise these splash down events, rather than chase ever-higher peak speeds.

In addition to bigger foils for Banque Populaire XI, which improve stability when airborne, the team worked with North Sails to further refine sail shapes that confer better stability when foiling.

Duraffourg says: “These boats are very reactive and very dynamic, so we need a sail plan that won’t induce too much heel. The sail plan is also as close to the deck as possible to benefit from maximum end plate effect.”

At this level most round the world record attempts fail, not because the boat isn’t sufficiently quick, but as a result of a critical breakage.

Banque Populaire XI therefore incorporates a conceptual step-change in the approach to the structural engineering of the cross-beams. These have twin structural elements, so that if the boat hits a UFO at speed and one element breaks the second should remain intact. 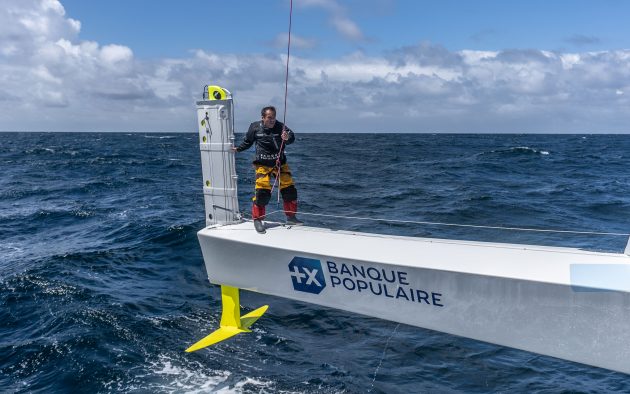 Both ends of the amas are very fine. Photo: J Lecaudey/BPCE

The beams also have a monitoring system that Duraffourg says “helps us to see the condition of the laminate.” The idea is this will allow the boat to continue racing or, if damage is more extensive, to safely make port without assistance.

This fundamentally different philosophy for Banque Populaire XI is one that clearly adds cost and weight (the boat is a tonne heavier than its predecessor) but reliability is the over-riding factor. “This is very important for us,” emphasises le Cléac’h.

In a similar vein, there are systems on multiple levels to minimise the risk of capsize. For instance, the hydraulic ram that controls the mainsheet will release at a predetermined load. In addition there are cleats connected to a pneumatic system that will automatically release if the boat’s heel angle exceeds a specific value.

The autopilot can also be configured to change course to depower the boat if heel angle is greater than a pre-set figure.

Externally, the most obvious differences on Banque Populaire XI are in the aerodynamic shapes that minimise wind resistance. This is a vital factor when the apparent wind speed can top 50 knots for thousands of miles at a time.

Extensive aerodynamic CFD analysis produced a profile close to that of an aircraft wing – even the doghouse is shaped with this in mind. As well as reducing wind resistance this shape increases vertical lift, giving the foils a small helping hand. It’s also a shape that gives the central hull enormous inherent stiffness.

To keep weight to a minimum, lightweight fabric is used to achieve the necessary shape for the cross beams in areas where no additional structural strength is required. 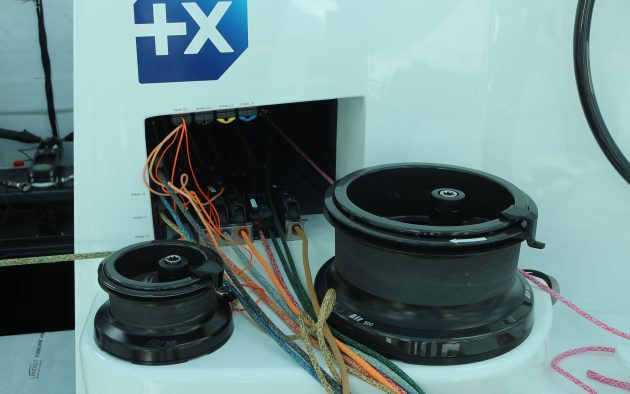 Duraffourg believes we will see still more optimisation in this area in future: “Aerodynamics are the last brake on performance and we are getting into a new era in this field,” he told me.

Construction of the central hull and amas was subcontracted to Multiplast in Vannes and Fibre Mechanics in Lymington.

The main hull is of a new design by VPLP. It’s flat bottomed, with very fine forward sections, then becomes very deep further aft, where there’s also plenty of flare in the topsides, which increases the beam at deck level.

In addition to its adjustable elevator foils, the huge daggerboard includes a pinger intended to warn humpback whales of the boat’s presence. “We don’t want them to be afraid, but just that they notice us,” says Duraffourg.

The amas are built from the existing moulds from Banque Populaire IX, that were also used for Actual-Leader and Sodebo. These are so fine in the ends that the antifouling stops more than 4m aft of their bows, while the transoms taper away to the minimum needed to support the rudders.

All three rudders, plus the daggerboard, have elevator flaps that can be set at different angles to control the flight, trim angles and both longitudinal and transverse stability. These are not interfaced with the pilot but some of the trimming is adjusted almost automatically.

The control section is spilt into two areas. Aft is a covered cockpit with a wheel each side. Enormous glazed areas and extensive white paint makes this feel almost as bright as being outside, despite the excellent protection it provides. Further forward is a more sheltered area with bucket seats and additional monitors. 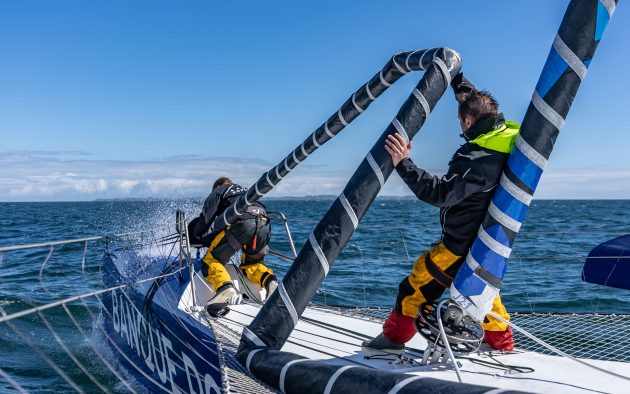 Sail handling systems haven’t changed a great deal from previous maxi trimarans, although Harken developed new carbon winches for the team that are exceptionally light. While everything is optimised for le Cléac’h to handle the boat alone as efficiently as possible, the layout also works when sailing two-handed and even with a team of six when training, on delivery and for occasional crewed races.

At the time of writing Banque Populaire XI has shown tremendous promise, exceeding 40 knots on each of the first four days of sea trials. “Even we are amazed – compared to its predecessor the boat achieves significant speeds more quickly and with less wind,” says le Cléac’h.

However, we will have to wait to discover the boat’s full potential in solo long distance mode. After an extended set-up phase this year’s main objective is the two-handed Transat Jacques Vabre race with Kevin Escoffier in November, where they will take on Thomas Coville’s Sodebo, Yves Le Blevec’s Actual-Leader, and Franck Cammas and Charles Caudrelier in Maxi Edmond de Rothschild (now out of Ultime class measurement).

Therefore a solo record circumnavigation attempt is not expected before 2022. Le Cléac’h will also doubtless be looking closely at the latest new Ultime, François Gabart’s M101, which has just hit the water.

The prospect of two state of the art Ultimes simultaneously racing the clock and each other around the globe – and up to five giant trimarans attempting records and races over the next couple of years – will undoubtedly be an incredible spectacle.