Rupert Holmes casts his eye over the Contest 49CS and Contest 50CS, two new launches from the trusted Dutch builder

This Dutch builder of quality semi-custom yachts has two new models based on the same Judel/Vrolijk hull design in build. The 50CS is a centre cockpit sloop that replaces the existing model of the same name, but significantly updates the concept, with a contemporary cockpit arrangement, more powerful hull shape and larger accommodation. The 49CS is an aft-cockpit design with twin quarter cabins.

Both have considerably more internal volume than the previous 50CS that was launched in 2012. Overall beam is little more than 1ft greater than the older boat, but this is carried right aft, creating much more space in the stern sections, which are also deeper than before.
At the same time, stability is markedly improved, as should be performance to windward and in light airs. “In physical terms, we have less heel, less drag, less moment in the waves. So it is smoother, more comfortable,” says Johan Siefer of Judel/Vrolijk. 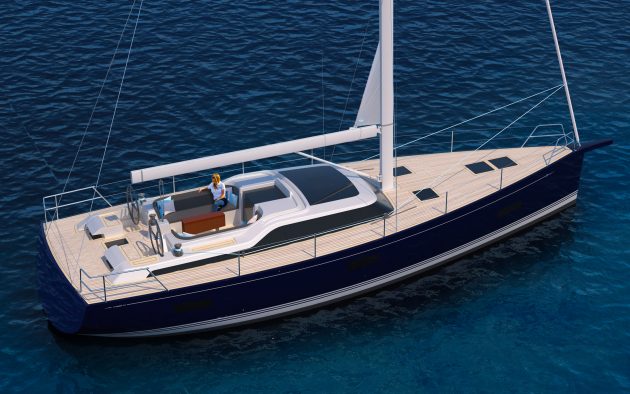 A taller rig enhances light airs performance, but it’s not so large that the benefit of the hull’s additional stability will be lost. The rig is also positioned further aft in the boat, allowing for a wider variety of headsail and asymmetric spinnaker options. 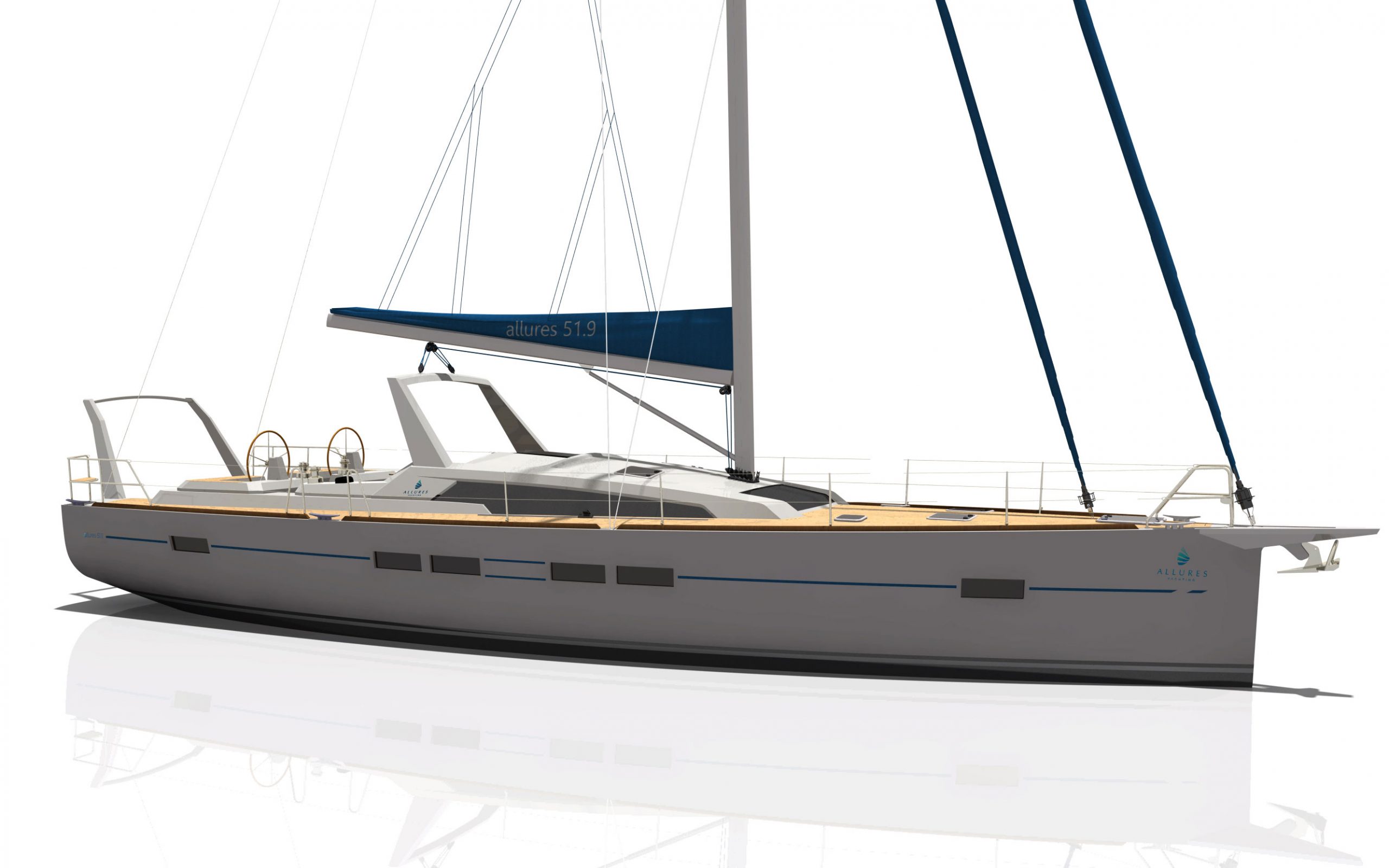 The third generation of the flagship of this French bluewater range, the Allures 51.9, retains the brand’s core concepts of… 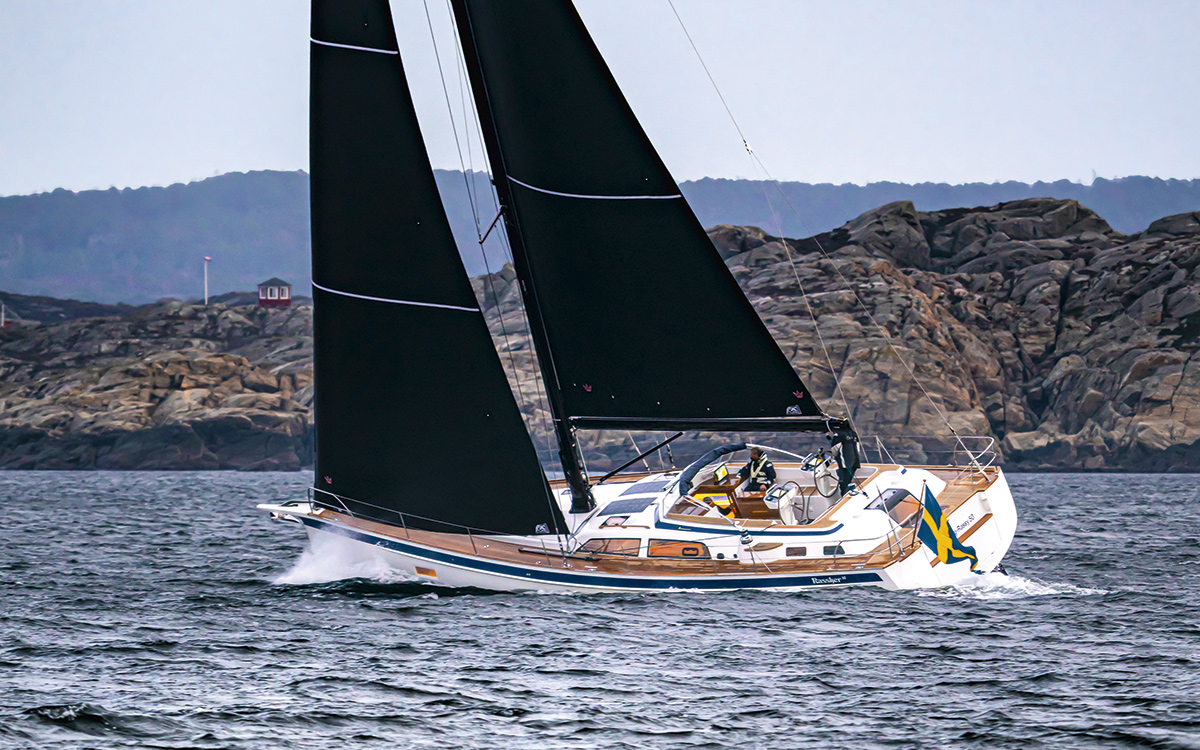 The 50CS has a conventional owner’s cabin aft accommodation layout, in the same manner as Contest’s earlier designs. However, the previous relatively small centre cockpit is replaced by a much larger arrangement with twin wheels and separate areas for working and relaxing. It also benefits from an unencumbered central walk-though, and there’s no need to clamber over seats and high coamings before going forward, or to the back of the boat when moored stern to. 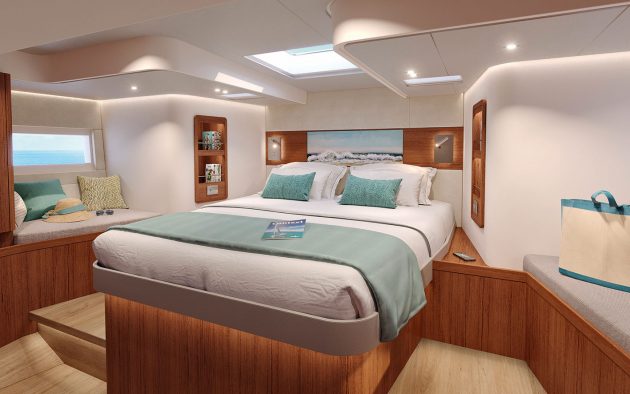 Below decks the aft cabin is both wider and further back in the boat, freeing up space for a larger saloon and galley amidships. Both aft and forward cabins have a wide peninsula bed and big hull windows. There’s also the option of the transom window first seen on the Contest 55CS, which gives novel views from the aft cabin when anchored with the tender garage door open. The optional third cabin, forward by the mast, can be fitted out as a workroom or office if required.

The 49CS is an aft cockpit yacht that arose out of a demand for a bigger version of the popular Contest 42CS. Unlike many of today’s aft cockpit yachts, the helm stations are not positioned right aft, squeezed close to the stern rail. Instead, they are well forward, in the same position as those of the centre-cockpit model, ahead of a large area of aft deck. 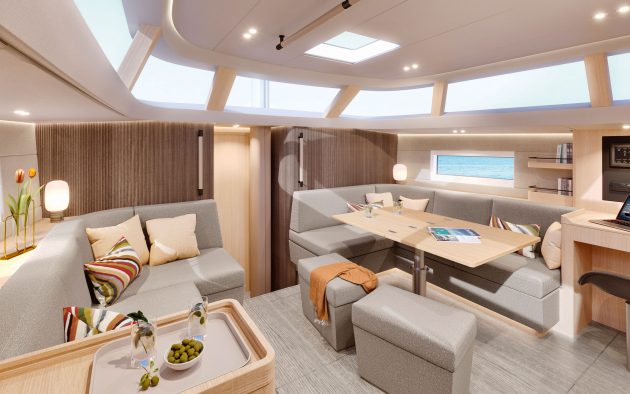 The hull’s wide and high aft sections are just as suited to this layout as to that of the 50CS. “The Contest 49CS has a completely different feeling to that of a normal aft cockpit yacht, where everything inside at the back is conventionally relatively low,” says CEO Arjen Conijn.
The mirror image aft cabins are unusually spacious, with generous headroom and sufficient width to be fitted with either double or twin beds.
“This arrangement works really well for families sailing with children, giving parents private space forward, and two large, equal cabins aft… [and] this works well for guests too,” Conijn adds.

Talking of how the concept for this boat came about, Conijn says that while Contest has led the market for 50ft centre cockpit designs for a long time: “We also have customers leaning towards an aft cockpit arrangement, while looking for the same high quality build and comforts of Contest, without resorting to the less comfortable, less practical Med-styling of other makers.”

The 49CS layout benefits from the same big linear galley as the 50CS, with stowage and worktops on both sides.

In both cases construction is of Contest’s Lloyd’s-approved vacuum infused composites. More carbon fibre has been incorporated in the structure, which increases stiffness without the need for structural components of a size that would impinge on accommodation space. The first examples of both boats are currently in build, with delivery scheduled for 2022.