Andy Rice reports from the Olympic Sailing in Tokyo 2020 on the heart break of just missing out on the top of the podium and the mental fortitude required to make it in the cut and thrust of Olympic competition.

How is it that anyone could possibly be distraught, in floods of tears, because they’re carrying a seven-point advantage going into an Olympic Sailing Medal Race?

The answer to that question, is ‘when it could have been at least a 27-point advantage.’

Denmark’s Anne-Marie Rindom had sailed a faultless Tokyo 2020 Olympic Sailing regatta up to the final qualifying race when her big points lead unravelled in a moment of madness, and not knowing the rules properly.

The defending Olympic Champion from the Netherlands, Marit Bouwmeester, on the other hand, had endured some major setbacks throughout the week including a black flag disqualification for breaking the start line too soon. As it turned out, Rindom did just enough to claim Laser Radial gold, Denmark’s first of the Tokyo 2020 Games. Josefin Olsson won silver for Sweden, and Bouwmeester had to settle for bronze. 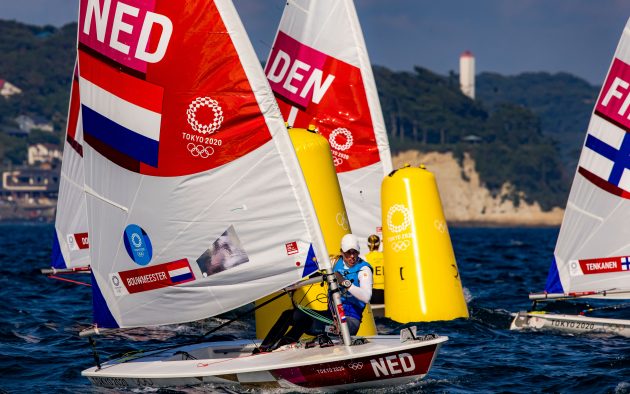 For some a Bronze is cause for celebration, for others, like Marit Bouwmeester only one medal matters. Photo: Sailing Energy / World Sailing

Except Bouwmeester didn’t settle for bronze. I asked her afterwards whether she felt relief in having secured a medal when it looked like she might end up with nothing. Or was it regret at missing the gold?

“It’s really hard to be satisfied with the bronze medal. I think my way of approaching sport is that there’s only one medal that really counts. And I think I’ve been making too many big mistakes, especially with getting a black flag [disqualification]. 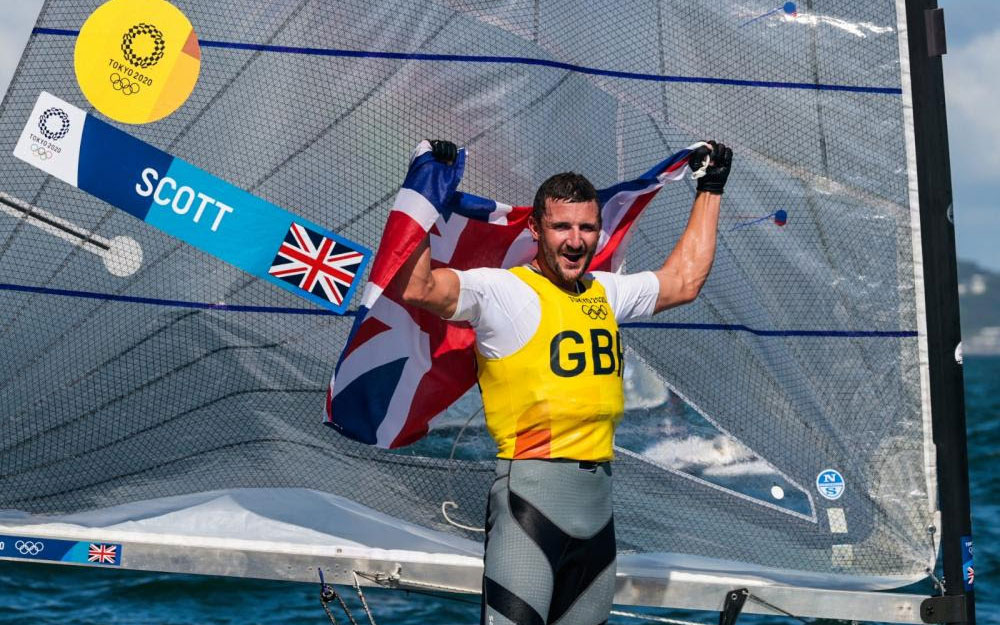 Iain Percy, Ben Ainslie and Giles Scott. These three British sailors have now between them taken every gold medal in… 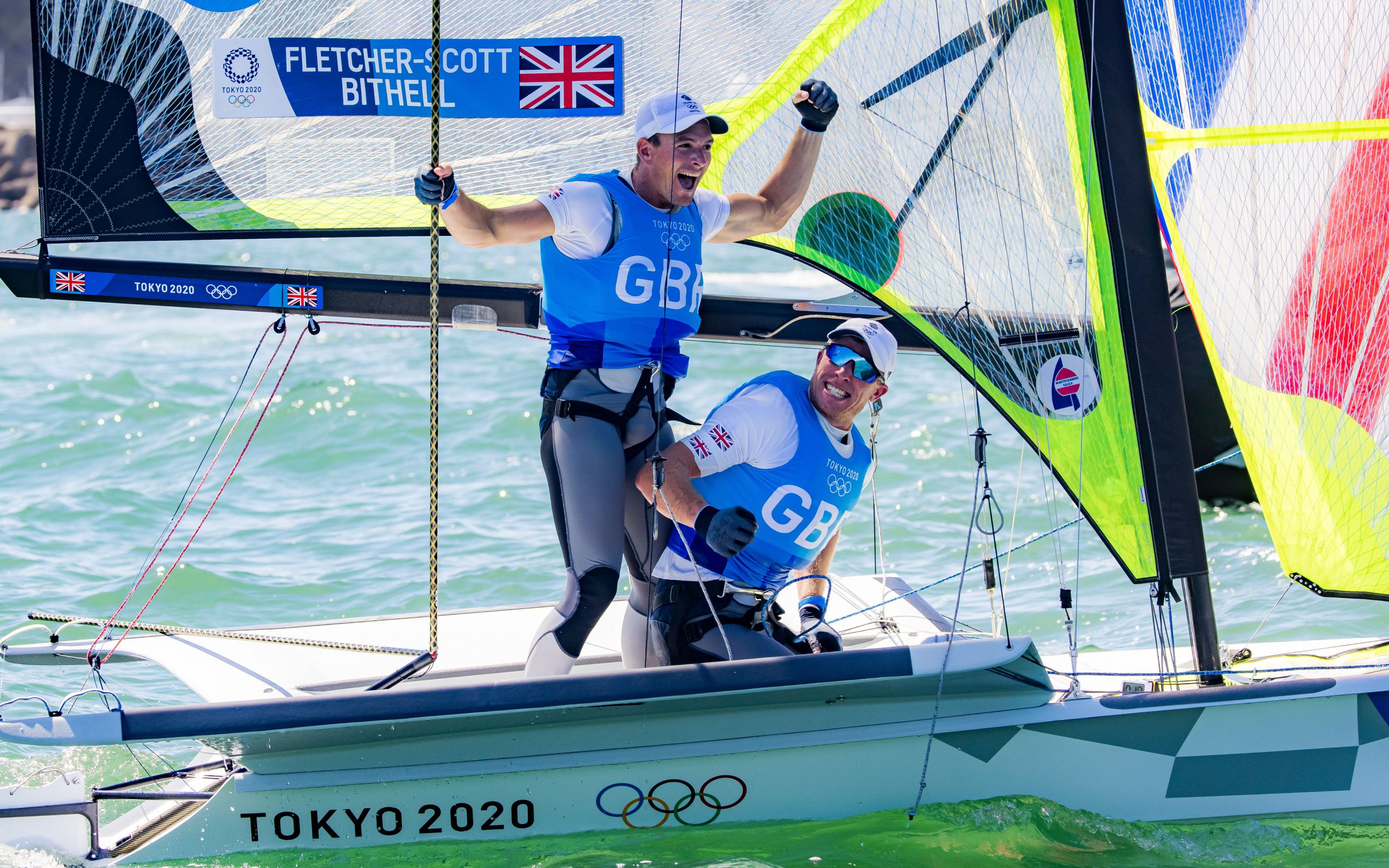 The Men’s and Women’s Olympic Skiff fleets saw some tense racing for their Tokyo 2020 Olympic Sailing medal races, with…

“I did everything I could to fight back and I shouldn’t be disappointed with a bronze medal. But my philosophy, my sports philosophy, is that it’s only one place that counts. It’s quite hard to be satisfied with bronze.” Pushing her further, reminding that Bouwmeester has won a silver, a gold and now a bronze from the last three Games, I asked her how many medals she had won. “One.”

Aside from her singleminded attitude to winning, what’s incredible about Bouwmeester is her resilience, her sheer professionalism no matter what circumstance in which she finds herself.

As journalists at the Games, our one opportunity in the day to interview the athletes is the fleeting moment when they walk through the Mixed Zone off to one side of the boat park.

They are obliged to walk through the Zone but they’re not obliged to stop and talk to us. I swear some of the sailors have got some kind of ‘ghost mode’ that they can activate when they don’t want to be spotted. Or maybe it’s because they are so thin that you can’t see them when you look at them from side on.

When a sailor has stuffed up, it must feel like a walk of shame. I’m sure if I were on the other side of the fence that I wouldn’t want to stop to tell the rest of the world about my day of calamity.

So I have enormous respect for any sailor that has the balls to stop and share their most horrific moments with the rest of the world. The sailors that only stop on the days when they’ve got a good news story, but keep their heads forward and charge on through the Mixed Zone on a bad day – I believe that reveals a psychological chink in their armour.

I’ve seen sailors do that this week, and if they’re honest with themselves, this is a part of their campaign that they need to address before Paris 2024 if they decide to go round again. 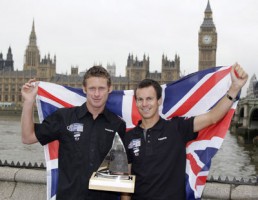 In covering four Olympic Regattas, the absolute masters of the poker face in the Mixed Zone were Nick Rogers and Joe Glanfield. Great Britain’s 470 sailors would show up at the Mixed Zone for the Beijing 2008 Games with big grins on their faces. Unless I had seen the results beforehand, I had no clue whether they had just sailed an amazing day, or had an absolute horror show.

“If you can meet with Triumph and Disaster

And treat those two impostors just the same…”

Easier said than done, though, Mr Kipling! There’s little doubt in my mind that mastery of this rare skill will put you well on the way to achieving the mental resilience required for winning medals.

This is also why it’s so mean and unfair to make athletes face up to the media at all. We’re always looking for the extremes, trying to drag an emotion – good or bad – out of the athlete when all they’re trying to do is follow the Rudyard Kipling manual of keeping yourself on the level.

There is also the option of displaying unbridled enthusiasm no matter what the circumstances. Rogers and Glanfield won two silver medals in their career by the way, and when they left off it was Luke Patience and Stu Bithell who took up the mantle and won another 470 silver medal for Great Britain at London 2012.

When they went their separate ways into different campaigns for Rio 2016, neither was as strong in their new partnership as they had proven when they were in the same boat.

Luke Patience endured all kinds of slings and arrows along the road to Rio which I don’t have the space to go into here, but through all that he did incredibly well to get a fifth place out of the Rio Games with crew Chris ‘Twiggy’ Grube.

Stu Bithell didn’t get to the Games at all, missing out on selection to Dylan Fletcher who was sixth at Rio.

After Rio the former rivals partnered up and Fletcher and Bithell have formed themselves into a world-class team. World Champions in 2017, they had a few stumbles along the way but like most of Team GBR here in Tokyo, they have matched or exceeded expectations. 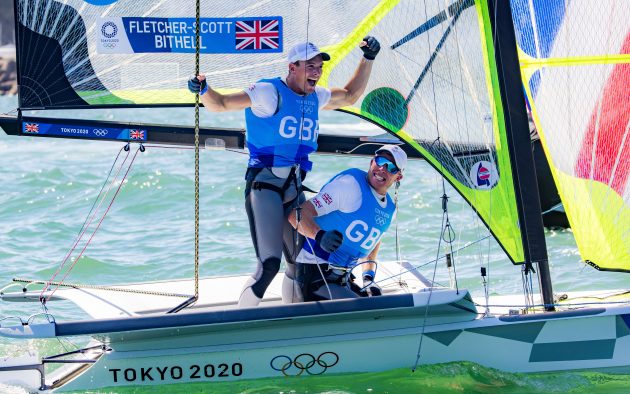 Fletcher and Bithell picked up gold in the 49er having faced the media every day of the competition. Photo: Sailing energy / World Sailing

They have been showing up at every Mixed Zone ready to talk and always smiling, even after a difficult day. Bithell has always been able to do this, and I think Fletcher has grown into it. When you’ve had a difficult day and you can still laugh about it, that’s a good outward indicator of emotional resilience. I wish I had more of that.

Perhaps it is no surprise then, that the British 49er pairing secured their gold medal in the 49er fleet in fine style today, against the formidable Kiwi pairing of Peter Burling and Blair Tuke. They’ve been open and honest – good days and bad. And now, they stand on the top of the podium with a gold medal for their efforts.

The post Going for gold: When only one Olympic medal matters appeared first on Yachting World.