Hannah Mills and her crew, Eilidh McIntyre took the gold in the Women’s 470 at Tokyo 2020 in a controversial medal race

Hannah Mills and Eilidh McIntyre (GBR) have won gold in the 470 Women. Along with an Olympic Sailing silver from London 2012 and gold from Rio 2016, gold at Tokyo 2020 makes Hannah Mills the most successful female Olympic sailor of all time. Eilidh McIntyre’s gold matches the achievement of her father Mike McIntyre who won Star keelboat gold for Great Britain in 1988.

Agnieszka Skrzypulec and Jolanta Ogar (POL) took silver while Camille Lecointre and Aloise Retornaz (FRA) secured the bronze – a repeat of the bronze Lecointre took in Rio in 2016.

The race was not without its controversy, however, as the Brits, who had looked strong all race lost a handful of places down the final leg. One of the boats to get past the British pairing was the Polish team of Skrzypulec and Ogar, which moved them into the silver medal position leapfrogging the French who followed Hannah Mills and Eilidh McIntyre over the finish line. 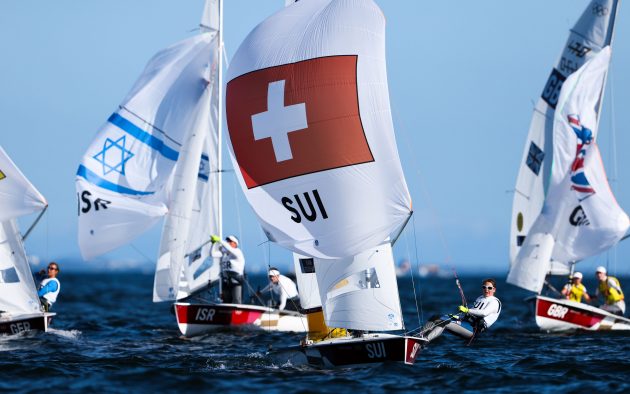 Hannah Mills and Eilidh McIntyre went into the day with a significant lead of 14 points, meaning the French team of Lecointre and Retornaz could only beat them if they won and the Brits were a long way back. The fight between Poland and France was much closer, with the Poles only needing to finish one position ahead of the French to steal silver.

It was, then, something of a surprise to see the French team taking the fight to the British sailors at the start, the pair locked closely together near the committee boat end of the startline as Lecointre and Retornaz tried to get a controlling position just below the Brits.

The jostling for position saw all three lead teams failing to get the best start all slightly bow-back from the rest of the fleet. Skrzypulec and Ogar and the French team tacked onto port tack as both boats made an early break to the right.

Great Britain tacked over towards the other two boats and were ahead. Mills and McIntyre at times put a close cover on Lecointre and Retornaz to stop the French breaking through to the front of the fleet. Linda Fahrni and Maja Siegenthaler (SUI) and Luise Wanser Anastasiya Winkel (GER) were going fast and took the early lead.

Around the first mark Switzerland were ahead, with Great Britain in second and France back in sixth, one place ahead of Poland.