British Columbia is famed for its landscapes, but Julien Girardot discovered a rich community of craftsmen boatbuilders dotting its creeks

At first glance, Gabriola Island does not seem to be much a haven for sailors. Sails appear on the water for just a few months of the year, as the winters are long and harsh. Dense forest covers this British Columbian rock hidden in the Salish Sea, but in the shade of the pines boats are maintained with love. Gabriola Island’s bays shelter craftsmen who work humbly and quietly on their projects.

Here, sailors don’t chase after wins. Gabriola Island is not a nursery for future racing champions. The sailing community takes its time. Boat lovers ponder, dream, learn, and share their understanding of boats and life on the sea with one another. And they take pride in the task of building and maintaining beautiful boats for their own enjoyment.

That the people of Gabriola Island possess a relaxed attitude toward sailing is no accident. In the 1960s, the island became home to many hippies who were seeking a simple rural life. Today’s residents are a little more realistic, but a lineage of communal values and living according to nature’s rhythms has undoubtedly left its mark on the island’s inhabitants. 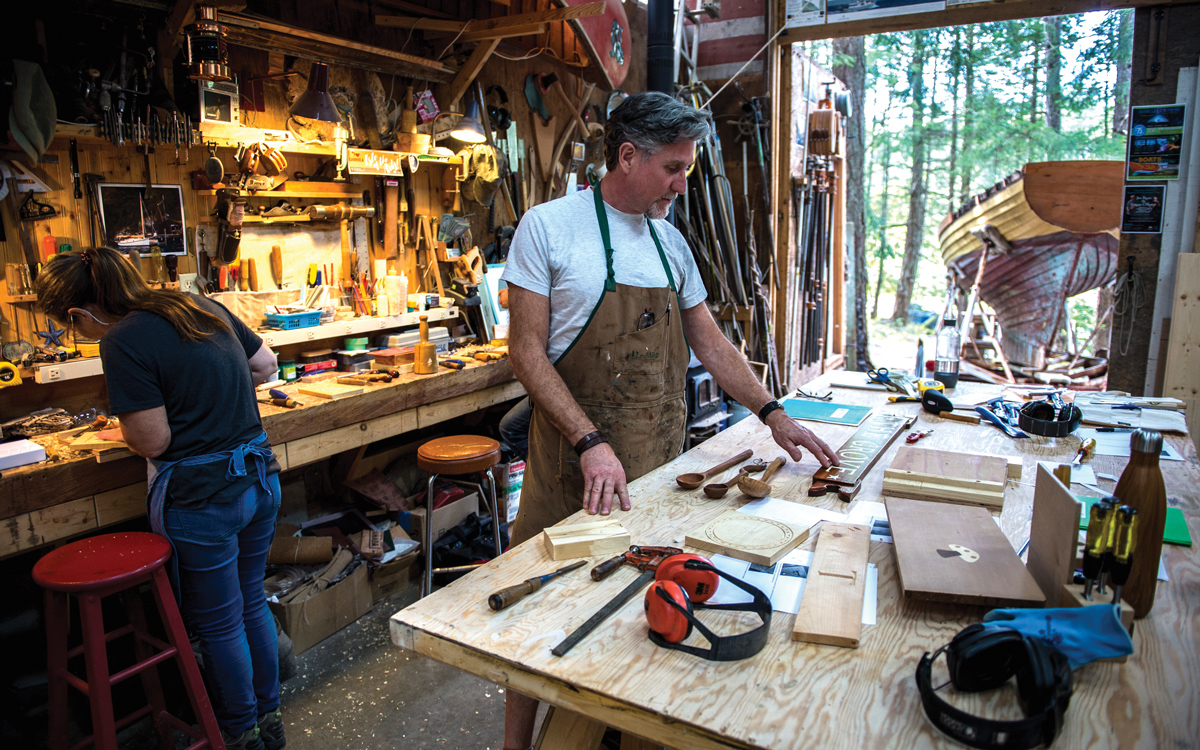 Tony Grove converted an old truck mechanic shop in the woods into a boat shed in which to build a 30ft wooden yacht commission. Later the premises became the Grove Woodworking School and now budding craftsmen come to learn the skills and techniques for woodcraft

Tony Grove, 57, is a serious shipwright. “It’s my trade,” he says with conviction. Growing up in the Vancouver area, he trained as a ship builder in the 1980s and was employed by a family business to restore wooden boats.

His journey to Garbiola Island is typical of many: in 1999 the owner of the Silva Bay Shipyard School invited Tony to become a teacher there. Tony spent six years at the school and many young people who studied with him are now themselves residents of Gabriola, owning or building their own wooden boats.

When Tony arrived on the island an owner placed an order with him to build a 30ft wooden sailboat. The project needed its own home, so Tony bought an old truck mechanic’s shop in the woods. He transformed the shed into a shipyard and hired other craftspeople to help with the build, but running the build and teaching took its toll so he eventually left the Shipyard School. 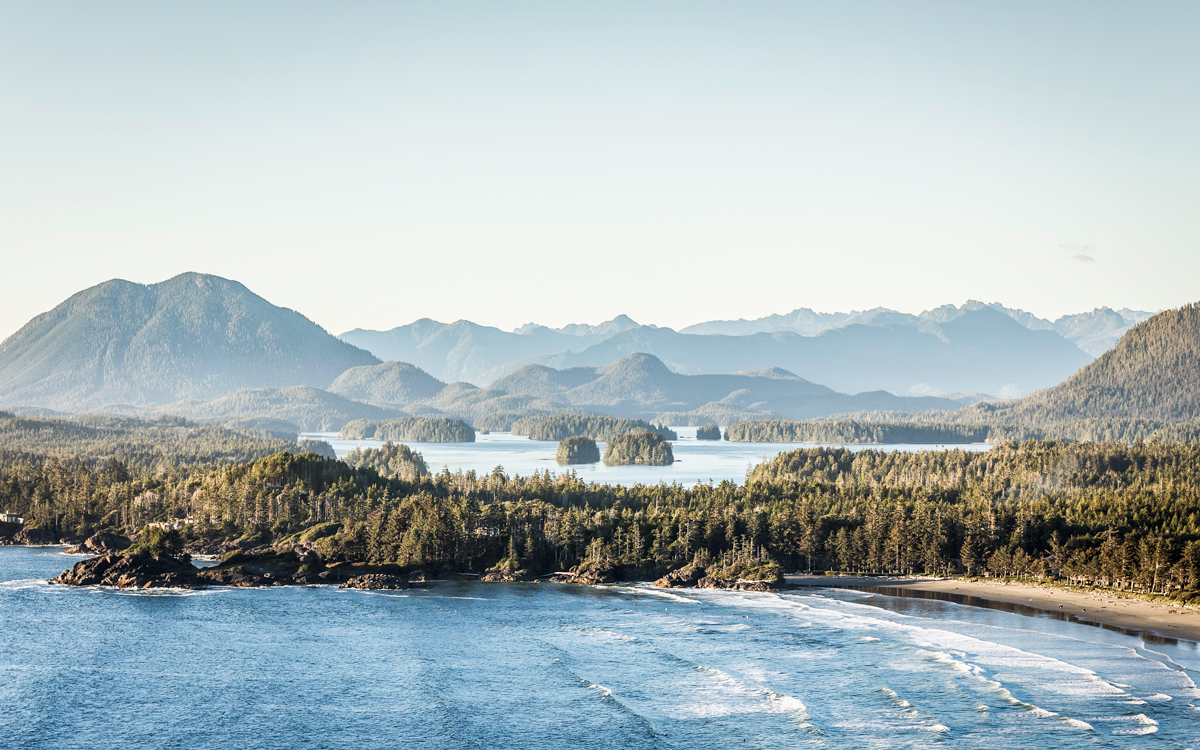 The coastline of south-east Alaska and northern British Columbia is a fractured network of islands, like a broken pane of… 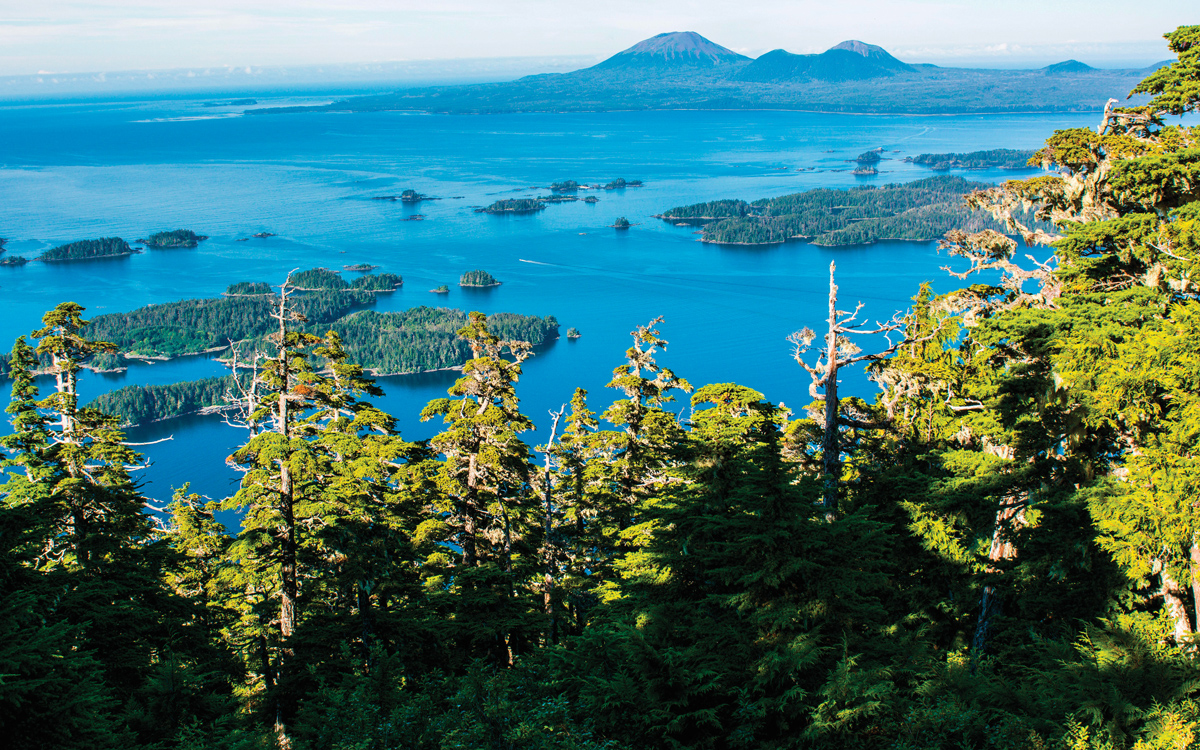 Standing on the bow of our borrowed 36ft steel cutter, I watched as my four children paddled the inflatable kayak…

Later, he founded a school of his own, The Grove Woodworking School. Today, Tony teaches general skills and techniques of woodwork, from how to carve a wooden spoon to how to build your own canoe. He lives a quiet life and loves to share his rich storehouse of skills in small class settings.

Also an accomplished marine artist, Tony is known for his artwork, technical writing and custom woodworking.  “It comes naturally, like a normal act of my life. Like carving a piece of wood, it’s my sanity.”

Fred Apstein, now 70 years of age, was born and raised in Washington State’s Puget Sound, a true maze of saltwater courses. He moved to Gabriola Island with his Canadian wife and their sailboat in 1994 after 30 years of “very good living, with very little money” in the harbour city of Port Townsend near Seattle. Fred used to work in the boat industry, and was the force behind founding the shipyard school on Gabriola Island. 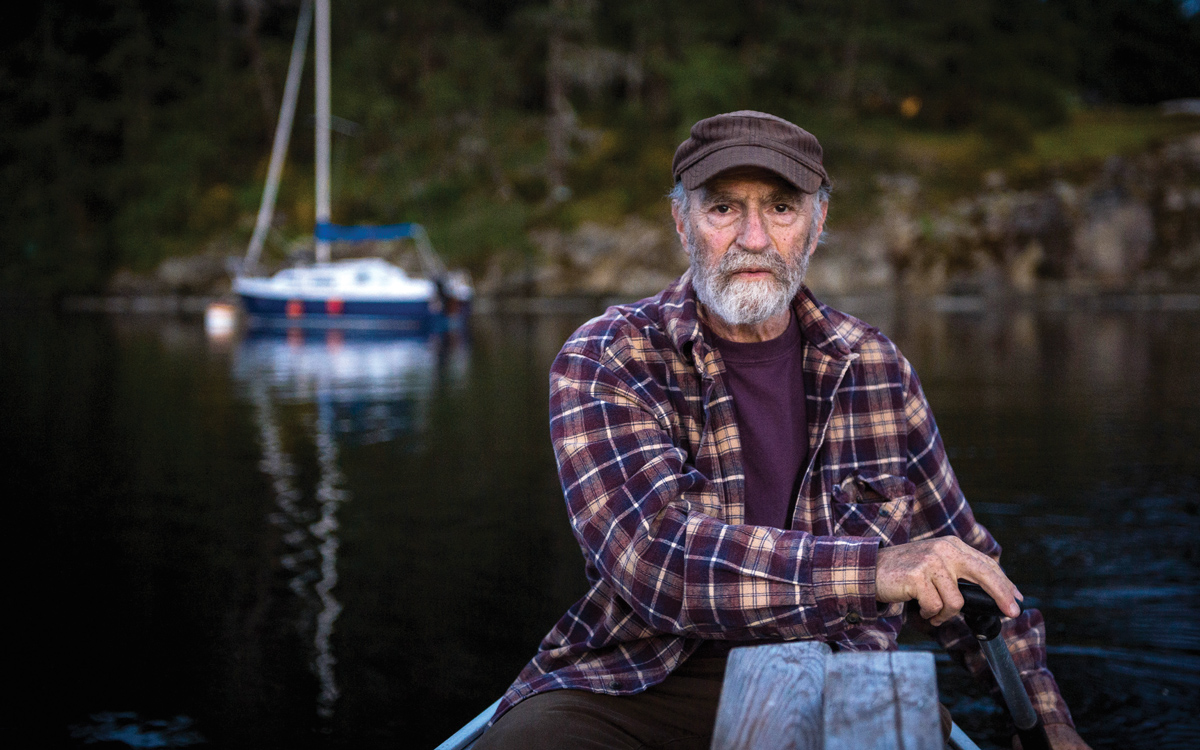 “Silva Bay Shipyard School was my idea. The owner of the property wanted to tear it down and build time-share condos. He agreed to let me rebuild the shipyard if I could find the money. I created a not-for-profit society and got half a million dollars in job creation grants. We hired out-of-work fishermen, to help them learn carpentry skills and do other kinds of work. I ran the school for a little more than ten years.”

Sadly, the school closed a few years ago, but it inspired many young people to get involved with wooden boats. In one way or another, most of the characters I meet on Gabriola Island are into boatbuilding and sailing because of Fred Apstein. Today, Fred owns a sweet little blue 21ft boat to sail the Strait of Georgia and feel the breeze of where he has sailed throughout his life. Many of his friends love to visit him to play bluegrass music, Fred’s’ other passion. 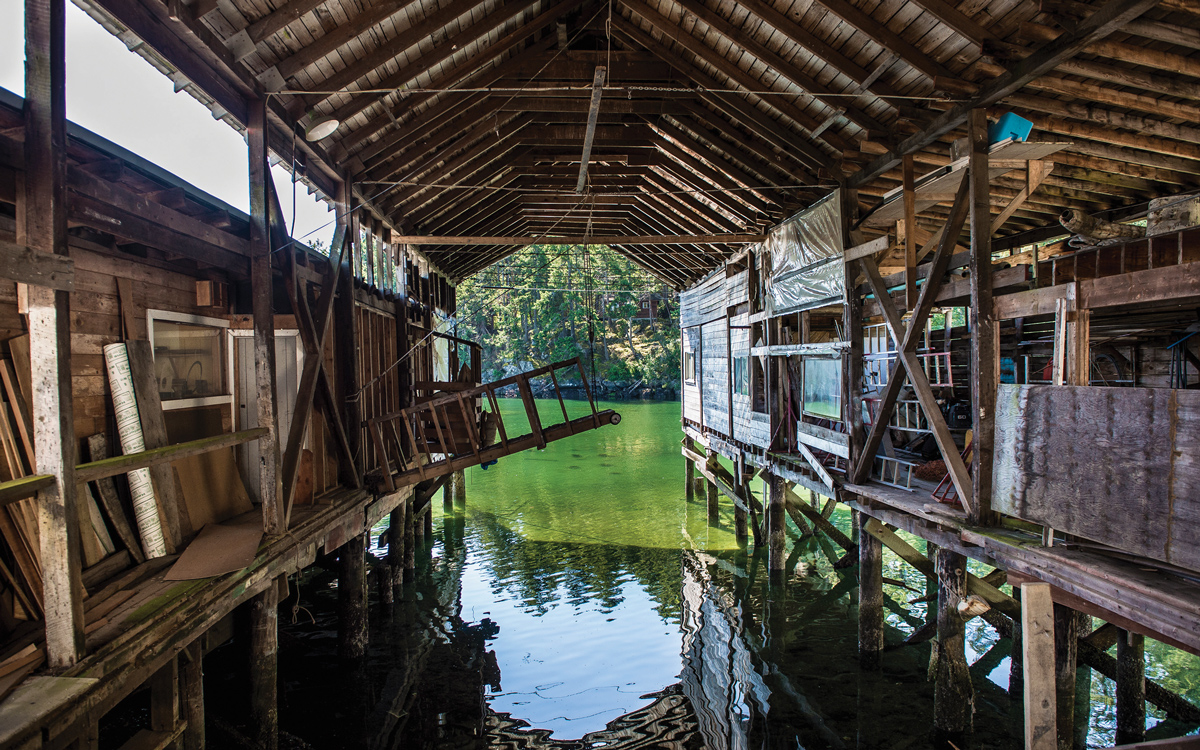 In 1945, Vancouver boatbuilder Les Withey brought his young family to Silva Bay. He partnered with local fisherman Norm Sear and established a shipyard to build wooden fishing boats. Gabriola Island had no electricity at the time; so Withey used a Fairbanks Morse diesel motor, from the Gabriola Island ferry Atrevida, to power his woodworking and machine shops, hardware store, and small cafe.

Withey’s Shipyard gained a reputation for its sturdy West Coast fish boats and became the largest enterprise on Gabriola Island, employing shipwrights, electricians, mechanics, painters, and clerks. In the mid 1950s, the Canadian Navy ordered five 75ft wooden crew boats from the yard. Many are still afloat today as private yachts, a testament to the skill and quality of Withey’s craftsmanship.

By the 1970s, sensing the future was in tourism, Withey installed fuel pumps for visiting yachts and expanded the marina to accommodate recreational boaters. In 1974, he retired aboard a converted wooden tugboat with his wife Marg, to spend their last years cruising the British Columbia coast. 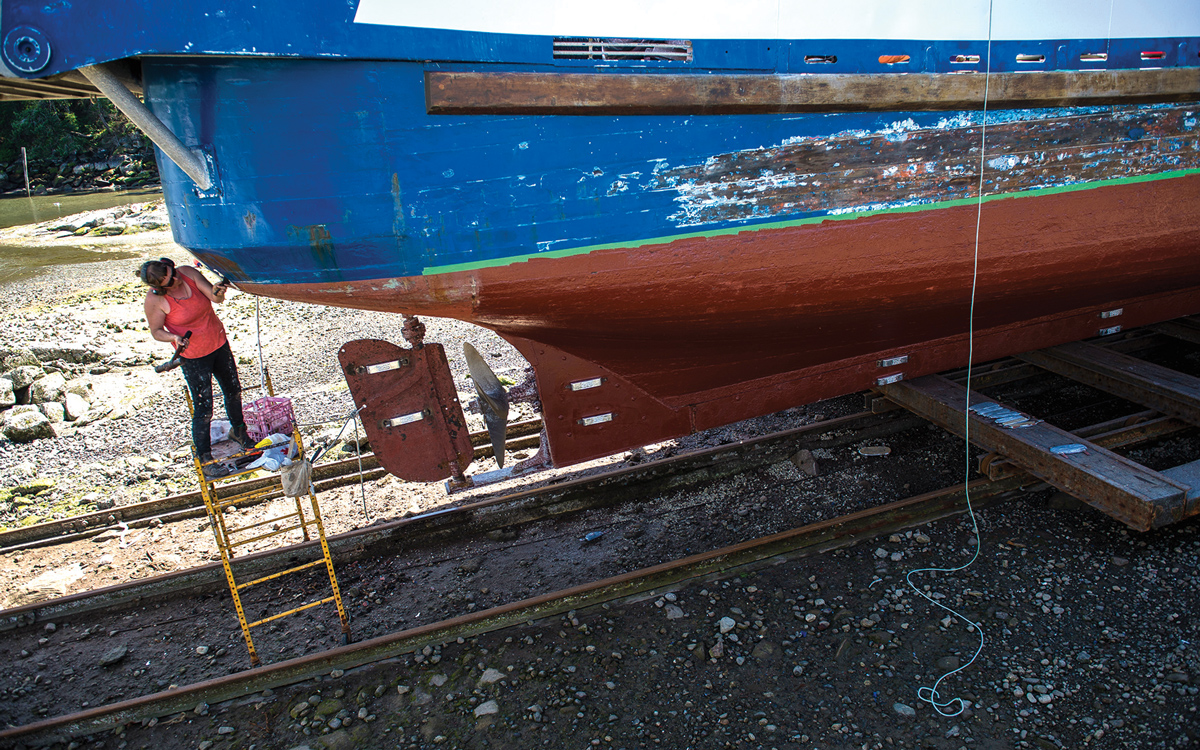 Quill is an authentic Gulf Islands man; he was born and raised in the remote Marina Island in the northern Strait of Georgia. His parents were squatters and built their house on the beach in the 1970s.

When Quill was one year old, Scott Paper Company bought the island and loggers moved in to clear the land. Tree planters came next and Quill grew up in this community of workers. The life was wild: “I was getting to school with a sailboat. Where I grew up, everybody needed a boat to get around.”

Later, Quill moved to Nanaimo and started to work on boats at the marina, not really knowing what he was doing and was charging less than the cost most times. 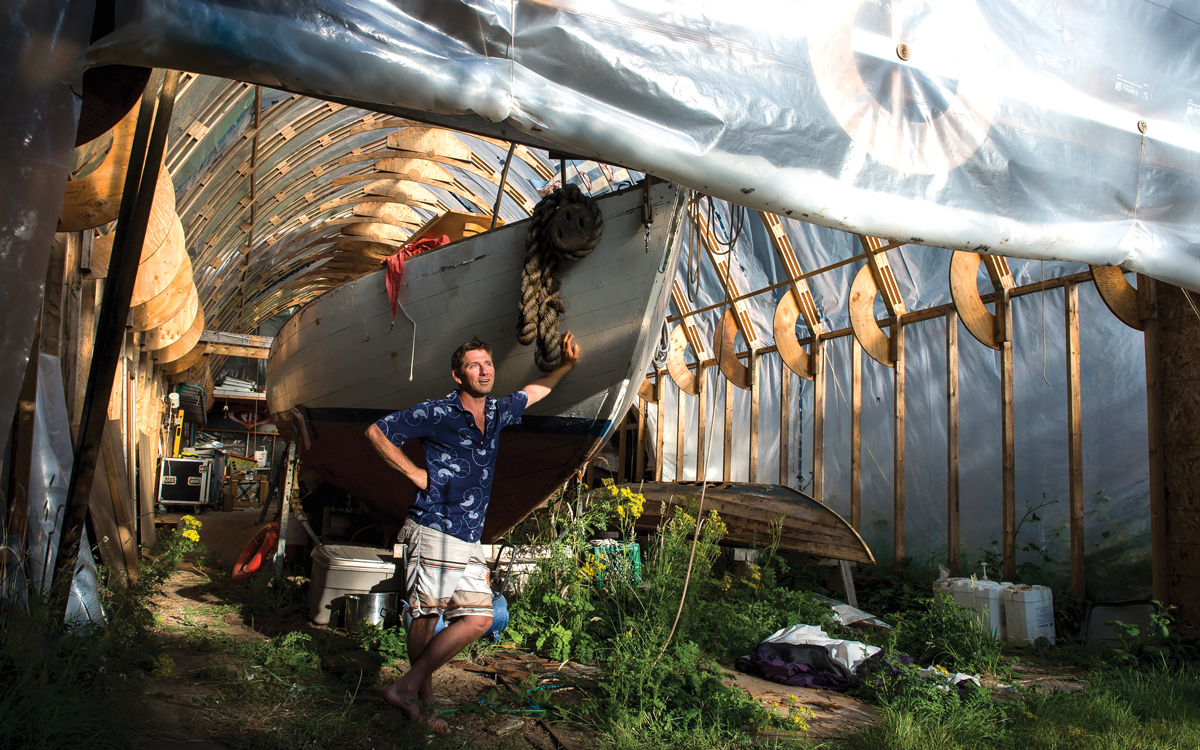 When three people contacted him in a week about a new boatbuilding school on Gabriola, he decided to investigate. “So I came, checked it out and it was looking like what I wanted to do!”

After a six-month course he was certified as a boatbuilder and had learned the fundamentals. “You build a boat while you’re in school. You see the process then, after this course, the main question you ask yourself is how much time do you want to give to this? For me, it became my trade.”

He’s not the only one; the school has left a huge print on Gabriola Island, as every year, two or three men went to the school for six months to learn a new trade. Often, they fell in love with the place and decided to stay on. 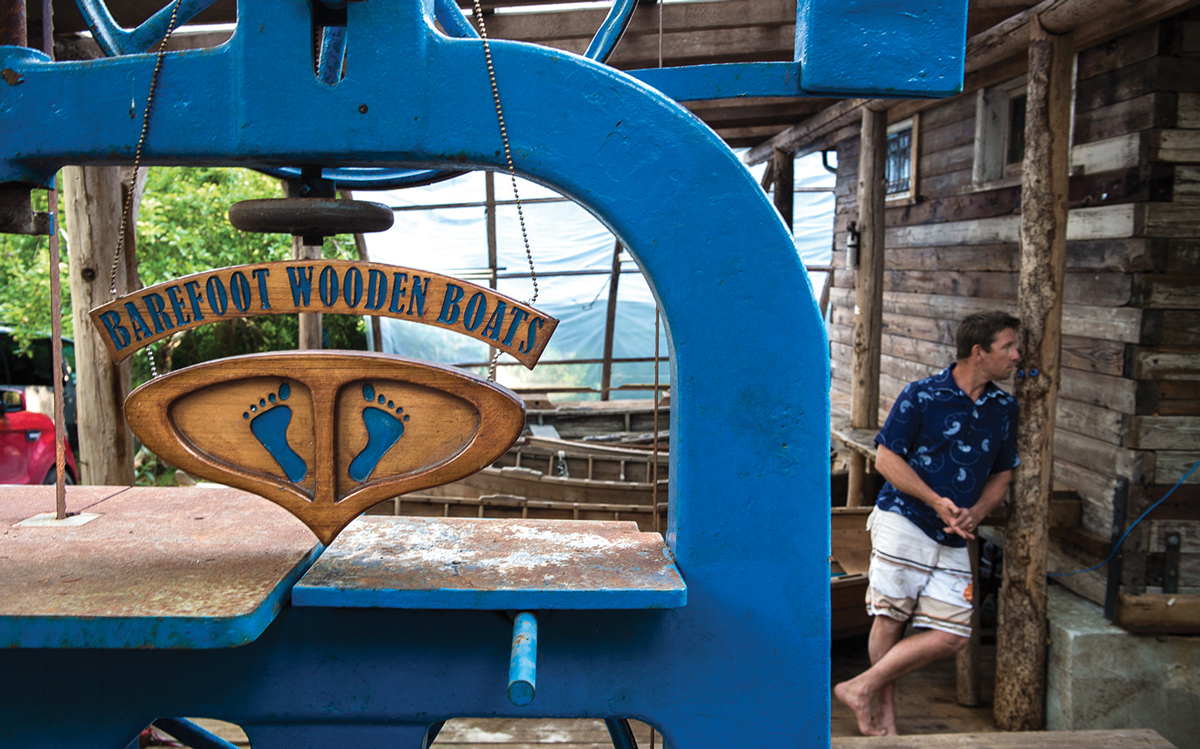 After school, Quill lived on a 15ft catamaran for a season, while building a cabin on Cortes Island. Then he delivered a boat to England and jumped aboard a maxi yacht, racing around Europe. He spent time in Cowes working on a 60ft catamaran. “It was awesome, I discovered another side of sailing that I didn’t know,” said Quill.

When Quill returned he teamed up with another building school graduate, Richard Lyons. “We built a shop at the shipyard, registered our company, and Barefoot Wooden Boats was born! I was living in a loft just above the shop, and life was great. We chose the name, Barefoot, because of our hippie lifestyle we have on the islands. Always sailing barefoot.”

After being forced out of their first premises, they moved the company to Richard’s land and built a number of traditional sailboats. “We were living together, building boats together, sailing boats together. It was a great friendship. Richard died in 2008 and I decided to buy his property. My son was born a few years later in this house.” 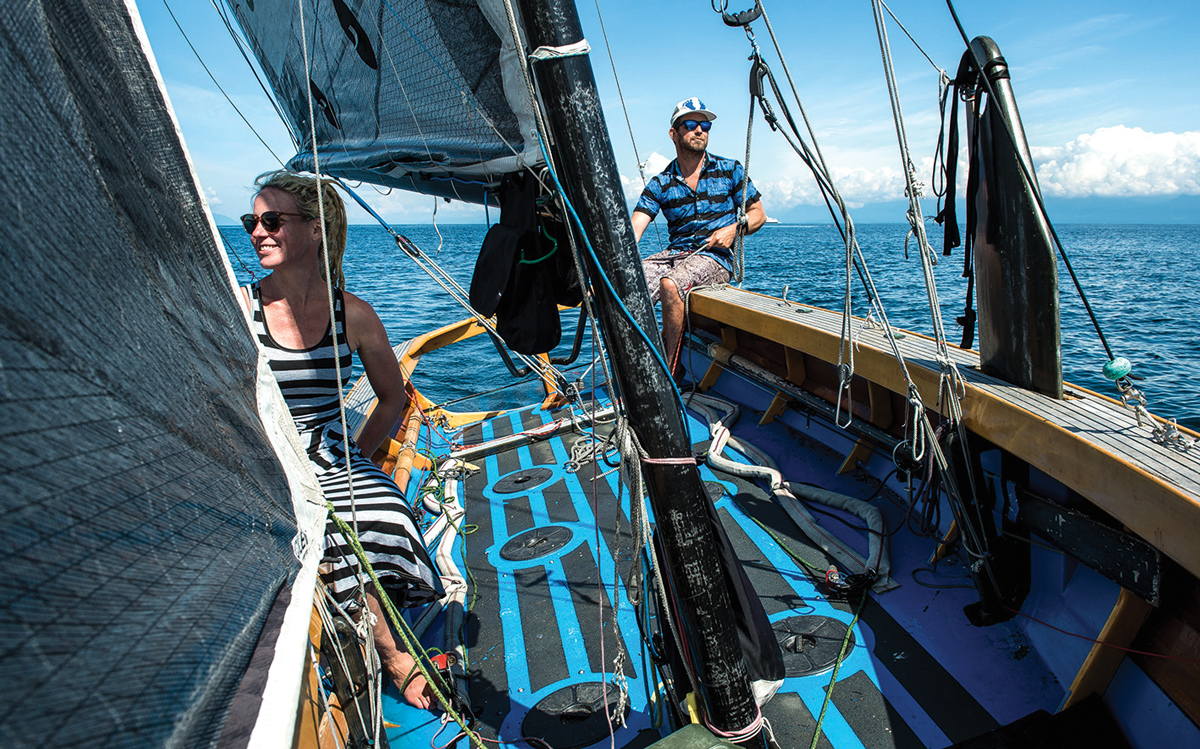 Goldman sailed his own build prototype Barefoot 5.8 in the 2015 Race to Alaska

In 2015, Quill created a very different plywood boat, the Barefoot 5.8, designed to combine classic style and modern performance. With a couple of friends he sailed a prototype, designed by Tad Roberts, named Dick Smiley, in the R2AK, a 750-mile, unsupported, engineless race from Port Townsend, Washington, along the entire coastline of western Canada to Ketchikan in Alaska.

“The race was won and we were still a hundred miles from the finishing line enjoying sailing at our own rhythm and making stopovers to sleep properly or drink a beer in a pub, not really thinking about the race – but we finally did it!” recalls Quill.