Last month Jasmine Harrison, 23, became the first woman to swim the length of the UK from Land’s End to John O’Groats. Harrison lived aboard her Bavaria 38 support yacht for four months, chasing every turn of the tide heading north. While Harrison was often in the water for up to six hours at a time, a rotating support team shepherded her over 900 miles. Will Bruton joined the yacht to skipper passages of the challenge in Cornwall and Scotland and explains some of the unique challenges for the crew.

Jasmine Harrison first set an endurance record when she became the youngest woman to complete the transatlantic Talisker Whiskey Atlantic Challenge solo, aged 21. Despite being capsized twice, breaking her elbow, and nearly being run down by the drilling ship Stena Forth, she rowed over 2,550 miles alone across the Atlantic in 70 days.

When it came to looking for her next endurance test, she was determined to pursue a discipline she was familiar with.

“Swimming is something I’ve done since I was young, whereas rowing was entirely new to me before the Talisker, so the full length of the UK seemed a natural fit. It meant pushing what I knew how to do well in a competitive swimming context, to the limit of what I might be capable of doing on my own.”

However, unlike rowing solo, the nature of the UK coastline demanded others to be involved on the water to make it happen. Jasmine found crew on sailing and kayaking Facebook groups willing to lend a hand.

Only two successful attempts at swimming from Land’s End to John O’Groats have been made before – both by men. Their approaches were defined by not only the physical test the swim posed, but the practical challenges to be overcome. One used a combination of a RIB and a catamaran, another combined sleeping on remote beaches between tides with going aboard a 20ft sailing yacht. 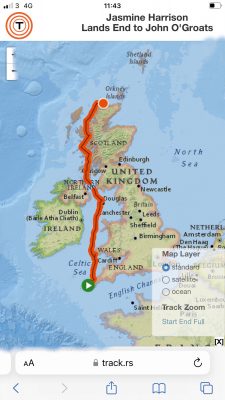 Right boat for the job

Harrison started to shape her plan months in advance; first searching for a yacht that would be both her home and her safety boat for the duration. After looking at several yachts (and increasing her budget), Harrison found a well-looked after Bavaria 38 on the Dart Estuary, on sale with Network Yacht Brokers.

She added an autopilot, diesel heating, and serviced the sail drive with the help of her sponsors. “One thing we were looking for was a good swim platform that was fixed to make getting in and out easier, even if the swell picked up.

“We also needed to be able to launch and recover a kayak easily so a lowish freeboard would help,” she explained.

For most of the challenge, and always at night, Harrison was joined by a kayaker with lights and a handheld VHF radio. The yacht followed nearby, while the kayak acted as a guide for which course to follow, sticking directly alongside her.

The yacht functioned as safety boat, accommodation, galley, and media hub, and was home to a rotating crew with up to five on board for some legs of the trip, which meant there could be a crew onboard the yacht and a safety kayaker in the water, allowing Harrison to swim night and day. While sailing was sometimes possible, most of the time the yacht motored in tick-over making keeping on course when there was any wind on the beam challenging.

Jellyfish were an anticipated problem from the start, but reality struck only a few days into the challenge when Jasmine took her first hit in the Bristol Channel.

“They stung my feet, face, neck and I took a couple to the mouth. I think I might have even swallowed a baby one. Basically, anywhere that wasn’t covered up got stung. The trouble is that they itch terribly once you’re out of the water and have warmed up, so they disturb the short rest periods before the next tide.”

With no kit truly designed for extended sea swimming to protect her, Harrison adapted by cutting holes in the back of a wetsuit hood for her eyes and mouth, pulling it on over the top of her usual hood. 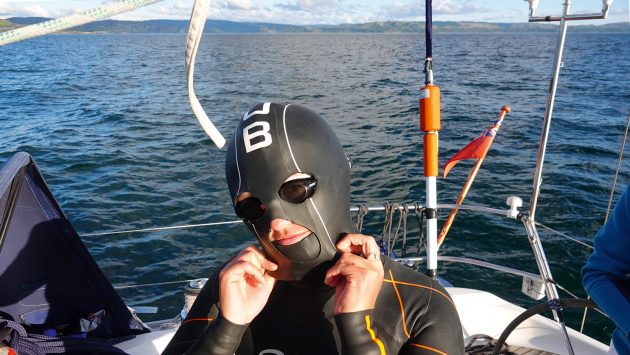 With no existing product available to protect from jellyfish stings a wetsuit hood was cut into and worn back to front. Photo: Will Bruton

Jellyfish were not the only wildlife she encountered in deep water. On one night swim both Harrison and her kayaker encountered a Minke whale and dolphins which swarmed around and extremely close beneath her in an agitated manner. “The only time I truly screamed out loud and reached for the kayak,” she says.

There were also numerous encounters with other ships in the busy UK waters. “In the Irish Sea and Bristol Channel you could tell there was shipping nearby, I could taste the diesel on the surface of the water. Fortunately, for this summer’s reported sewer overflows, I think, I was probably north in time to avoid them,” explains Harrison. 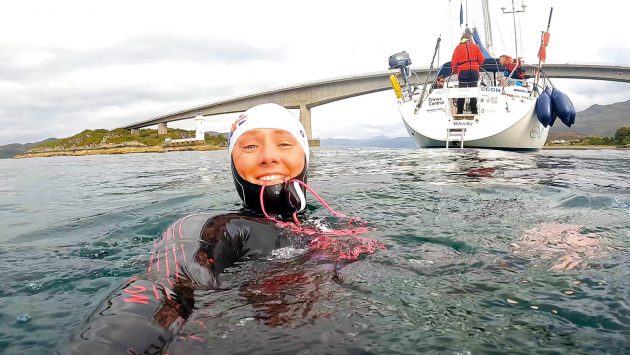 Swimming under the Skye bridge where tides can run at up to 8 knots. Photo: Jasmine Harrison

Skippers of the support yacht often found themselves talking to ships in the middle of the night over VHF, explaining why they were going so slowly. Reaching the west coast of Scotland, one bemused salmon farm skipper gave us a wide berth and ‘Good luck, she’s mad!’ passing us at 0300.

There were welcome encounters with other boats as well. “As we headed further north, yachts got wind of what we were doing and would clap as they sailed by. One boat chartered for a wild swimming holiday came out in search of us, everyone on deck giving an enormous cheer as they went past. That was great.

“A few marinas kindly waived their fee or gave us a big discount. One fisherman even delivered fresh lobster while we were stormbound.”

Harrison quickly proved her ability to swim for the entirety of a tide, and that dictated the team’s approach to completing the challenge. She would get into the water at slack water and, almost without exception, swim until the tide began to turn against her. Unlike the two previous successful swimmers, she would not get out for a rest, nor to drink. 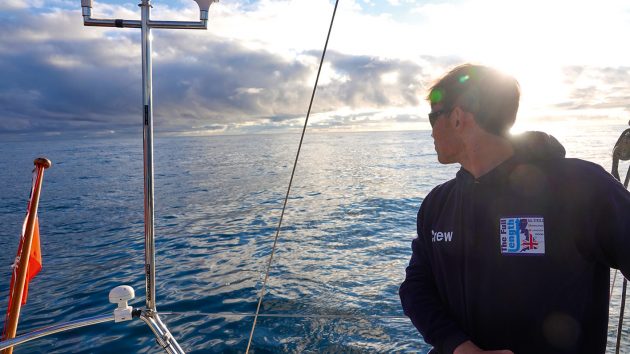 With the sun in the wrong direction, keeping track of the swimmer was nearly impossible. Photo: Will Bruton

Getting these tidal calculations right was an evolving experiment for the crew on board the Bavaria. The crew tried apps to begin with, but once the team reached the complex tidal streams of the Bristol Channel, it was determined that a traditional tidal atlas – combined with religious position plotting on a paper chart – was the best way to ensure maximum advantage was taken of each tide. Imray paper charts and pilot books were carried for every part of the coastline.

On occasion, particularly at the start, it didn’t go right. “On one tough swim, we worked out we had got it wrong at the end. I’d swum for six hours straight, in a lot of swell and been stung several times by jellyfish. When we worked it out, I’d only made just over two miles. From that point onwards we were extra focused,” she recalls.

Other tidal flows were less difficult to predict, while some proved more than a little exciting.

“We were swept into the Corryvreckan [the narrow strait between the islands of Jura and Scarba]. My kayaker had a chat with crew control over VHF, and we decided to just go with it. In all honesty, at that point we didn’t have much choice. I swam hard and we made it through unscathed. 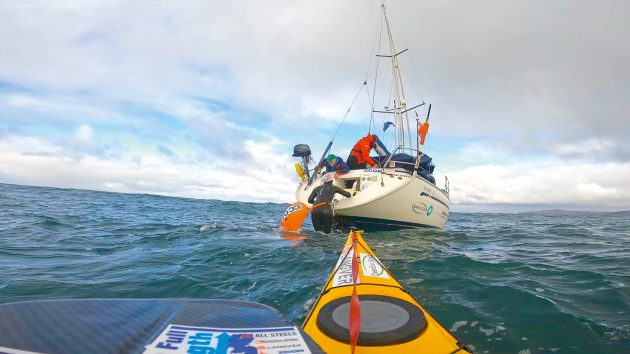 A permanent bathing platform on the Bavaria was crucial for easy entry and exit. Photo: Jasmine Harrison

“There’s pretty strong advice against going through there in all but perfect conditions, even in a larger yacht, but by being at roughly the right point in the tide we made it work.” Harrison was able to see the whirlpools directly under her through her goggles.

Further north, between the Isle of Skye and the Scottish mainland, Harrison and her kayaker clocked over nine knots speed over the ground at one point.

Keeping track of a swimmer in the water required constant vigilance from the support crew on the Bavaria. While bigger swell didn’t stop Harrison swimming, it did prevent less experienced kayakers from joining her – meaning that tracking was left to the crew on deck, who were now looking for a much smaller target. 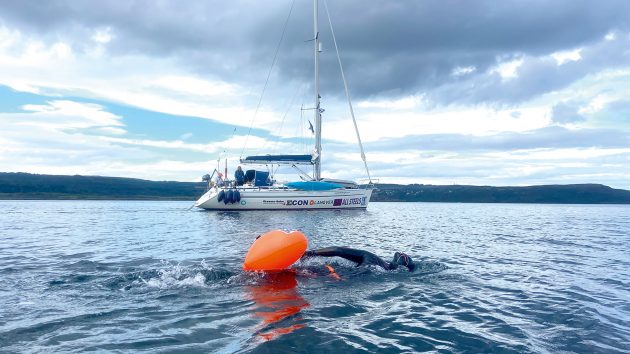 A swim float made Harrison much more visible in the swell. Photo: Jasmine Harrison

In her orange swim float Harrison carried a Garmin InReach tracker which was used to record the challenge, but also had a distress function. “As time went on it became clear just how little use that would be. Although I was wearing a thin swimming wetsuit, as soon as I stopped in the water, I would get very cold once I’d been swimming for a few hours; realistically I wouldn’t have much time to survive if we became separated for whatever reason and I could no longer swim. Only swimming hard kept my temperature bearable.”

Just south of Cape Wrath Harrison and her team encountered the weather the area has a reputation for. “Not far at all from the finish, we had to contend with hopping out of anchorages and marinas for one or maybe two turns of the tide, then running for shelter again. On top of that, the largest NATO exercise in several years was taking place, stopping us swimming when the conditions did turn in our favour.”

Stepping ashore on 18 October, Harrison completed the short walk to the John O’Groats sign having swum more than 900 miles over 110 days. See thefulllength.co.uk for more and to donate to the expedition’s marine charities.

The post How Jasmine Harrison became the first woman to swim the length of the UK appeared first on Yachting World.