Time to upgrade? Will Bruton talks to the crew of SV Delos to discover ways to future-proof your yacht that improve life on board – and are kinder to the planet

When Brian Trautman bought a 53ft Amel Super Maramu in 2008 he had little intention of living aboard for ten years. But after putting 70,000 miles under the keel, visiting 46 countries and creating over 200 YouTube videos on the incredibly popular channel SV Delos he and the Delos crew were considering making a change.

“When we visited the Amel yard, we sparked a lot of speculation that we were looking for a new boat. We were considering it, but it certainly wouldn’t be a quick decision. It forced us to think long and hard about what our plans were,” explains Brady Trautman, Brian’s brother, long-time Delos crewmember (and current skipper while Brian takes some parental leave).

They still aren’t ruling out a ‘Delos 2.0,’ but rapidly realised that one of the most valuable assets of the 18-year-old Amel was just how well they knew her. They decided to stick with what they know and instead begin a series of experiments to optimise and modernise the boat instead. 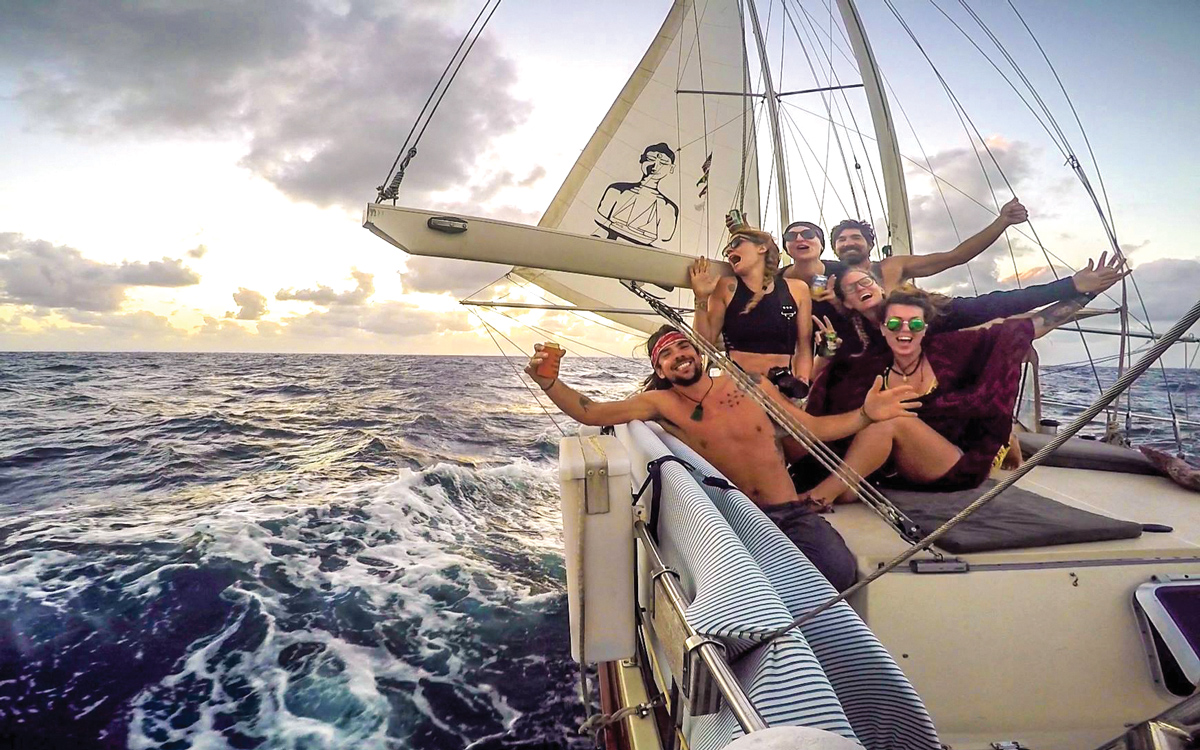 Knowing the boat so well is at the crux of the technology choices the Trautmans have installed and battle-tested over the past two seasons.

“We weren’t aiming to prove that this is right for every boat, we just wanted to make practical improvements that made sense for us and we’re in the fortunate position of being able to share the experiment widely so others can learn [from us],” explains Brady.

This meant trying new technology that works for an older cruising boat. Each modification has also made for interesting YouTube episodes for viewers keen to see how they went about it. Owner Brian Trautman studied electrical engineering before casting off from Seattle and is hands-on when it comes to fitting new systems. 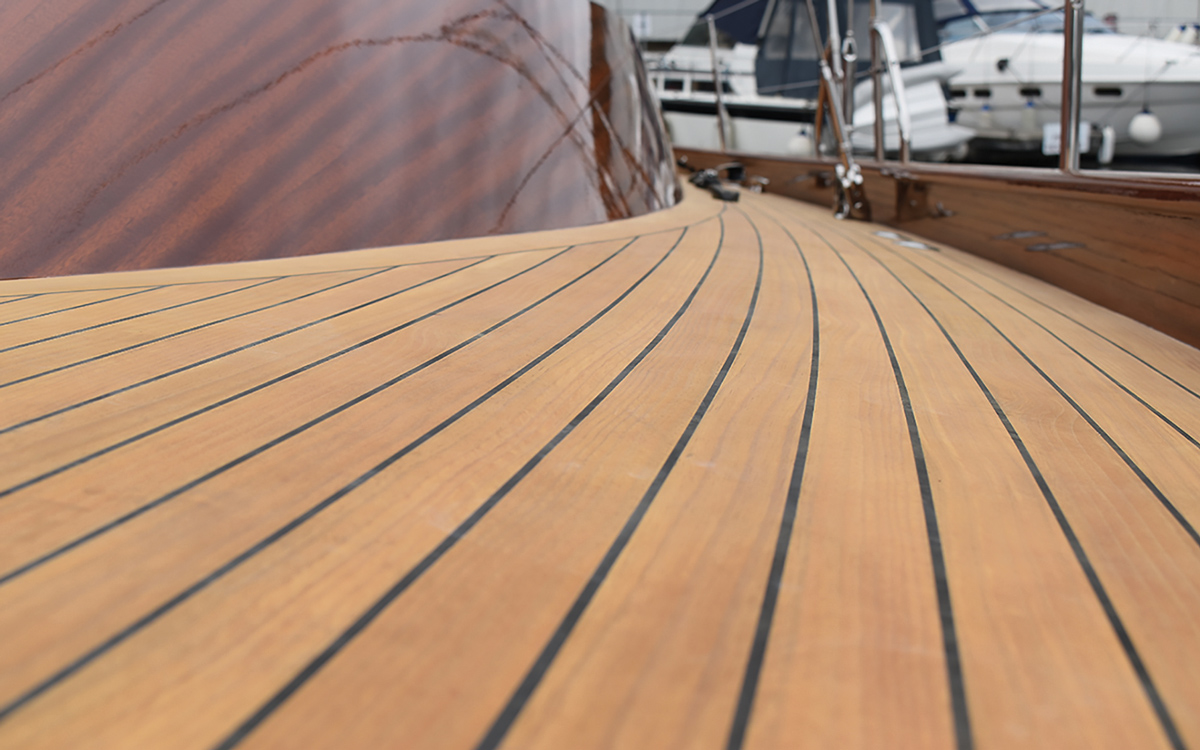 1. Ditch the teak Teak is no longer universally popular. The price has gone up dramatically, supply is dwindling, and… 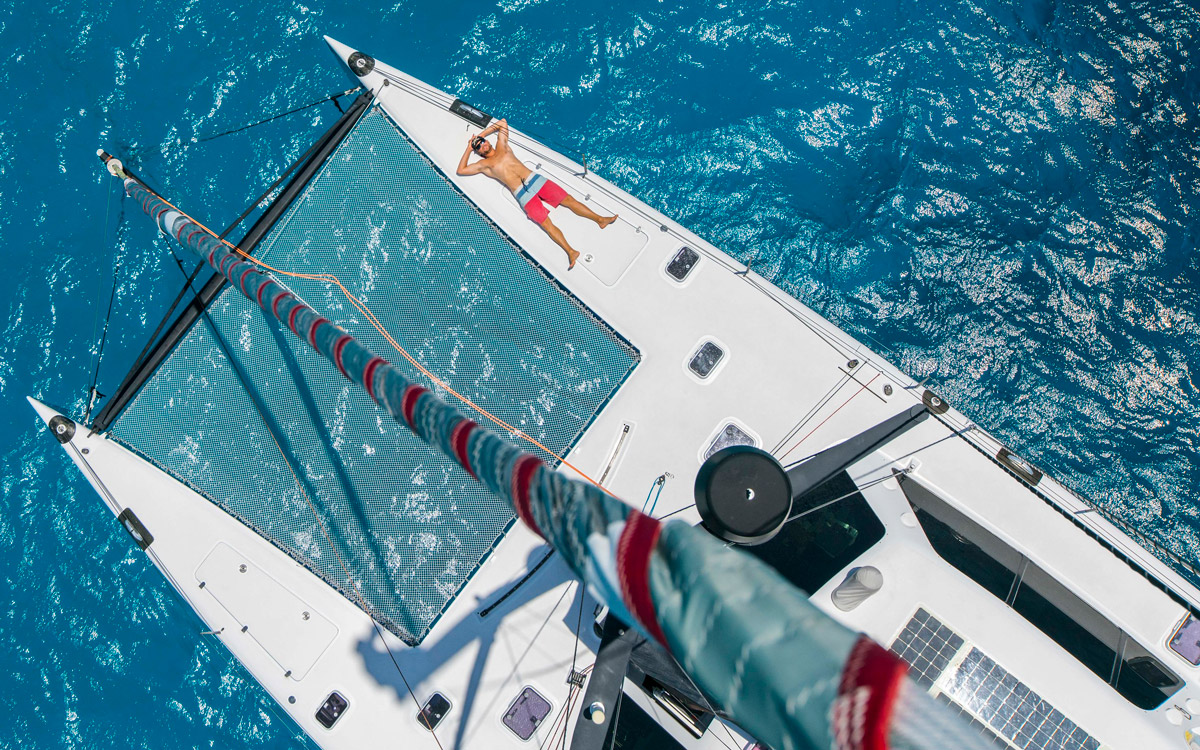 Imagine escaping the daily routine of work, the long commute, the corporate life, the grey skies… What if you were…

“We looked for practical steps we could take towards a better Delos. First and foremost, we wanted to ditch propane for cooking. We were on board almost all year round and it was an on-going headache to find cylinders and a safety concern.

“We also wanted a serious power upgrade to make us more efficient, ideally one that would allow us to run the high drain appliances on battery power alone; even a cooker. That meant lithium batteries of some sort.

“Thirdly, we wanted to go some way towards making her eco-friendly. Everyone knows that with traditional antifoul, the answer is basically to go for something toxic that works in the environment you are going to be in. We no longer wanted that and were searching for something less damaging. Having spent years in warm water, we weren’t betting it would work, it was very much an experiment,” explains Brady. 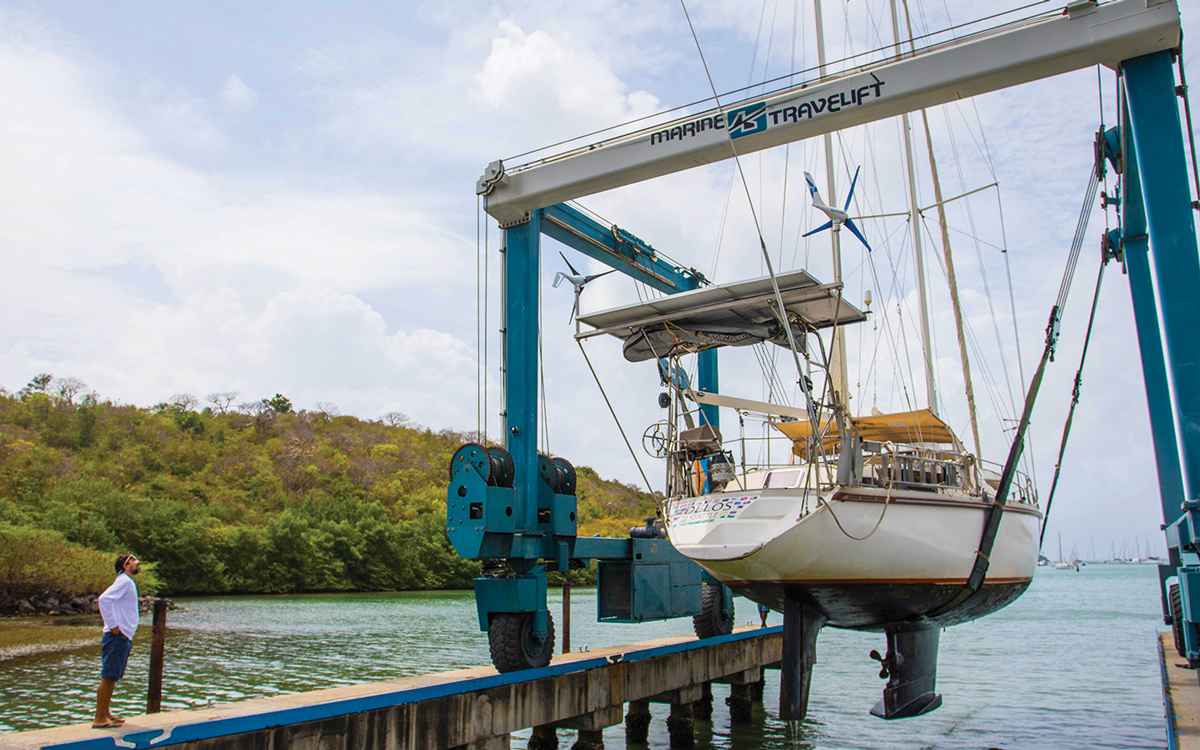 Haul out for SV Delos in Grenada

Key to all the changes was a new power system. “We knew that our existing solar set up could provide a lot of power in ideal conditions, but we also knew that our output varies hugely and that solar doesn’t always deliver. We edit videos on board, sometimes powering four laptops at once, so this had to be factored in.

“The second factor was the high-draw appliances that suddenly demand a lot of grunt in one go: this can kill some battery systems. An electric kettle, oven and stove all had to be considered,” explains Brian.

After a lot of research Brian settled on lithium-phosphate batteries by Dragonfly Energy and planned his system having calculated what everything would use. “We decided to go with phosphate, which are a much more forgiving and stable battery chemistry than ion. It’s a different chemistry to that used in mobile phones, laptops, and most electric vehicles.

“Lithium cells are picky about their voltages, so it is important to configure your charging system to the battery specs, in our case this means limiting the ‘bulk’ charge to 14.4V.

“You can also damage the cells by getting the voltage too low, pulling too much current, or too high and too low temperatures. This, though, is easily prevented with a good battery management system. We installed one from Victron Energy that’s proved brilliant and can even connect to your phone via Bluetooth to track what you’re using.”

The cost of the batteries, despite being far higher than lead acid, didn’t put Brian off after owning the boat for ten years. “We have already changed out the battery bank on Delos three times and if this technology was available when we started it would have paid for itself by now. 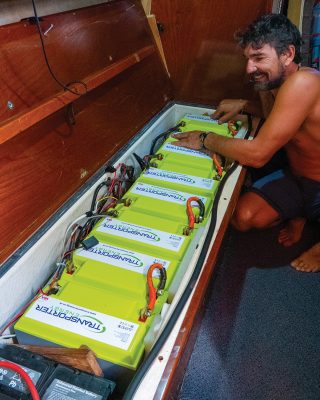 “Also, it’s important to consider that your usable capacity doubles, so effectively four lithium batteries has the same capacity as approximately seven lead acid batteries (assuming you discharge to 85%).”

The next stage was removing the propane cooker. “Not having gas has been a big improvement to life on board Delos. Only when you get rid of it do you realise just how much wasted heat it generates. You’re in the Caribbean, quite literally heating up your boat cabin!” explains Brian.

Once the new batteries were installed, the crew added a two-burner induction cook top and simple electric oven, building a gimbal themselves to take the place of their old gas oven. It’s proved a reliable set up and only requires the generator to be turned on when both burners and the oven are running at full power, otherwise running on battery power alone.

Determined to reduce the amount of chemicals used on the boat and going into the water, the Delos team spent a lot of time investigating alternatives for antifouling, eventually settling on a combination of two relatively new technologies.

The sonic antifoul system, manufactured by NRG Marine, works by transmitting electronic waves through the boat that agitate marine growth, discouraging it from clinging to the hull. It can be used for both the hull and seawater systems, being particularly effective when concentrated on high growth areas. The Sonihull technology was originally developed for commercial ships and has now been reduced in size for leisure vessels. 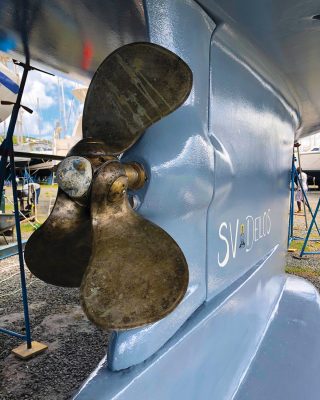 The crew applied the bottom paint with the help of Spice Island Marine in Grenada. Unlike conventional antifoul, it works by providing an ultra-slippery surface that naturally sheds growth underway so does depend on the boat being sailed regularly. It works particularly well with craft cruising at higher speeds.

Getting a smooth application proved essential and the team started by stripping the boat back to a bare hull using a dustless blasting system before applying a barrier coat, finally applying the paint with a compressed air spray for an even finish.

After a year Delos produced a video reviewing the new antifoul and answering questions from viewers. “The new set up has worked really well, even in places with very warm water like Grenada.

“Some forms of growth still persist, but the heavy growth – like barnacles – doesn’t seem to stick very easily at all. We keep giving the hull a quick scrub to keep growth down, but overall it’s been impressive,” explains Brady.

First published in the April 2020 edition of Yachting World. For more videos and an information sheet on Delos’ electrical upgrades, visit: svdelos.com

The post How the crew of SV Delos created the ultimate self-sustainable yacht appeared first on Yachting World.