Andy Rice talks to pro inshore racer Tom Burnham on how to run the pit smoothly, and be an effective crew boss

Running the pit is more than pulling the right ropes at the right time, according to Tom Burnham. “The pitman is that communication and decision-making link between the front of the boat and the back of the boat.

“You’re right in the middle, and you’re also the one that decides the timing of everything going up and down. You’re helping make the decision as to whether you can execute a manoeuvre or not.”

This means that a good pitman needs to be thinking like the tactician and strategist, in terms of the big picture on the race course, but also what impact that has on the technical demands of the sailors up forward, not least the bowman. Burnham believes his background as a bowman on the World Match Racing Tour helps give him an insight into the challenges any decision from the back of the boat might have on his team mates in front of him.

“Sometimes teams can get in trouble with their boat handling when there’s a strong afterguard without a strong leader in the pit or on the bow. There’s a risk that the afterguard can overrule what the pit and the bow are saying. And sometimes that’s the wrong decision, because the afterguard doesn’t necessarily know about all the steps that have to happen up on the bow. So having a strong person in the pit, operating as the crew boss, is pretty important.”

Being super clear, concise and consistent with your communication is very important. Whatever it is, be specific and clear.

Keeping the emotion out of it is important too. I was lucky enough to do this amazing leadership course with General Stanley McChrystal, former head of US military operations in Afghanistan and Iraq. The General talked about the importance of assuming ‘positive intent’ from everybody on your team. Then the only reason communication is happening is to make the team better. So even if it sounds like something that’s a little bit terse, you have to understand that it’s not coming from a place of negativity.

There will be times when you’re going to have to make some decisions when the back of the boat starts yelling at other boats and calling for overlaps. At that point the front of the boat – bowman, mast and pit – have to be able to manage themselves and not wait for instructions. Don’t wait for the tactician to tell you what to do because he might be distracted by other boats around him.

Make ‘time to manoeuvre’ your ultimate boss and work back from there. The three of you know what needs to be done, and when. Don’t wait for the order, make it happen between your team of three. 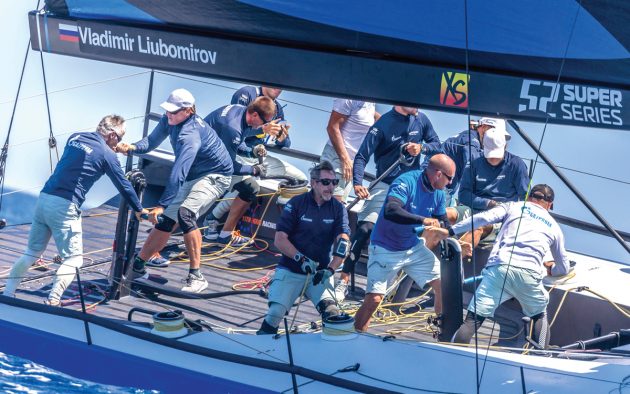 Getting on board a new boat your first step is to get to know it. Mark everything and get organised so you know what you’re going to need to do in the heat of the moment.

If you’re winning the race by miles then you’ll want to err on the side of giving things more time, but if you’re fighting for inside overlap on other boats, you might want to push it a little bit harder. But you still have to know those absolute limits and not venture beyond them.

The more experience you build up, the better and more accurate your playbook becomes – the user manual you’re continually adding to and refining. When you get a question from the back of the boat, like: ‘Can we change jib now or should we do it later?’ your knowledge of the playbook lets you give clear and accurate answers.

The playbooks for different boats can be radically different, particularly the difference between working with symmetric and asymmetric sails. The biggest practical difference is that with symmetrical sails, at some point you’ve got to put the spinnaker pole away. Do you change the jib sheets over from one side of the pole to the other so that you can put the jib up before the pole comes down? All those kinds of situations require advance planning. 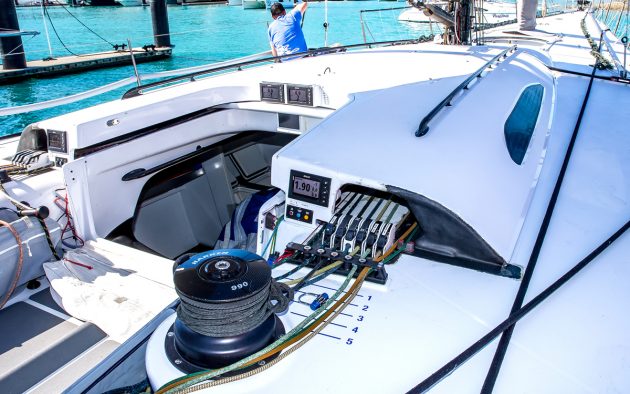 I’ve had to cut a few halyards in my time in the pit, so a good, sharp knife is an absolute must. So are leather sailing gloves. Sometimes halyards are running through your hands at high speeds – I’ve had gloves literally smoking.

A lot of sailors like to have a really short tackline on the bowsprit to minimise rope in the cockpit. I’m a big fan of a longer tackline; it’s really easy for the tack of your gennaker to hit the water during a takedown. If it does with a short tackline, it can act like a brake or it just hits the knot. The sail now acts like a big dam and sucks the whole thing back in the water.

If it’s a long tackline the sail will sweep down the side of the boat with the tack streaming along in the water, and you can pull it right back in the boat without trying to fight all that force.

One of the most respected coaches in the America’s Cup scene, US pro sailor Tom Burnham is also one of the world’s best at running the pit. It’s a role he’s done across four Cup campaigns as well as winning four TP52 world titles with Quantum Racing.

The post How to run the pit: Top tips from a pro sailor appeared first on Yachting World.