Clearly Stødig is not a sailing yacht, nor anything close to one. Indeed she is far from a conventional motoryacht. But sometimes there are vessels which may not have a mast and sails, but which appeal to an adventurous spirit just as much as any teak-decked, canvassed yacht. Stødig is such a boat.

Stødig is the brainchild of friends Guylee Simmonds and David Schnabel, both 28. Looking at the beautiful spaces they have created in this unassuming 35ft tub, it comes as no surprise that the pair met when studying architecture.

While seafaring is a new pastime for Schnabel, Simmonds comes from a sailing heritage and spent a childhood sailing the family yachts out of East Sussex and across the English Channel.

“I’m actually the third generation of my family to have some sort of boat in Newhaven. My grandfather had an old wooden boat that never left the harbour and was always sort of an ongoing project. Stødig is the first motor boat in the family, and yes, that was a small point of family contention!” he explains.

Given formative years spent on yachts, what drew Simmonds to the 23-year-old No 1 Lifeboat that had spent its working life strapped to the side of the MV Clansman ferry in the western isles of Scotland?

“I guess it was the architect in me seeing an opportunity in a slightly unusual space,” he explains. “There’s only a certain number of ways you can lay out a sailing yacht on the whole.

“And there’s a certain number of ways you can lay out a narrow boat, which I guess was another thing we thought about, whereas there haven’t been many lifeboats that have been so thoroughly converted. So there was that blank canvas appeal. 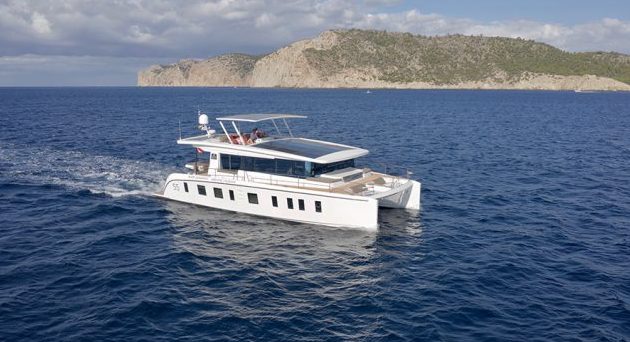 There is a slow, silent revolution under way in the yachting world. It is a revolution that is introducing tonnes… 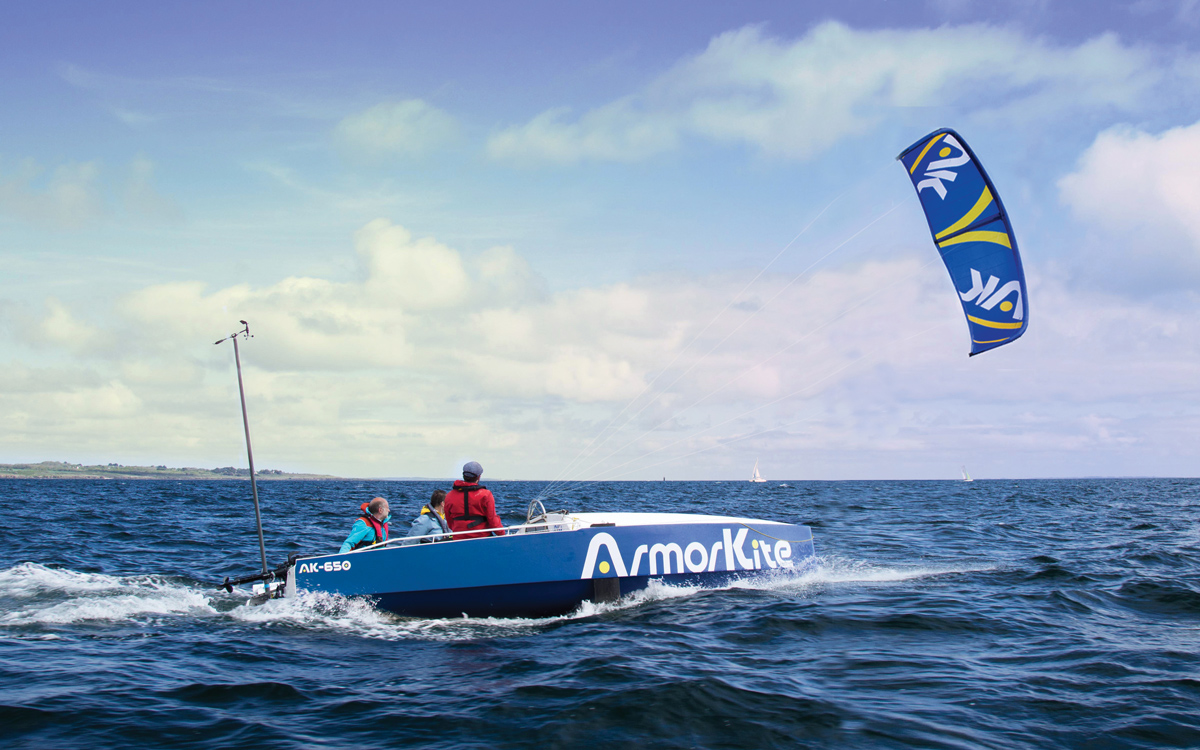 It’s a grey and wet February day on the pontoons at Port la Forêt, the Mecca of French single-handed ocean…

“There was a cost element to it as well. These lifeboats cost six figures new, but they’re generally sold for between £5,000-10,000. They’re built to a very high standard and they’re very safe. The fibreglass is up to 25mm thick, which is massive compared to any yacht.”

In early 2018 the 100-man lifeboat was listed for sale via a closed bidding process, Schnabel and Simmonds submitted an offer of £7,000 and won. Collection was due one week later, so she was hastily hauled down from Scotland to Lochin Marine shipyard in Newhaven in March.

Alongside their freelance architecture work, the duo spent every available hour during weekends and evenings working on the lifeboat, which they had renamed Stødig, meaning ‘steady’ or ‘reliable’ in Norwegian. They set themselves a deadline of a year to transform the industrial vessel into a liveaboard cruiser. 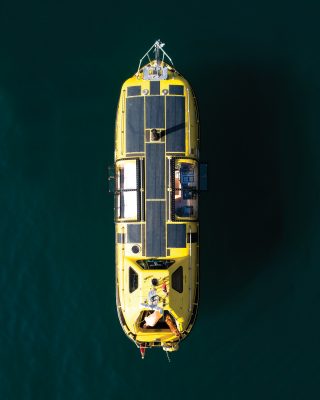 The roof deck is covered in flexible solar panels by Sunflare. They can be stood on and the tender can be inflated on the roof

“Our total budget was £30,000, which included the purchase of the boat,” recalls Simmonds. “This meant we really needed to do most of the work ourselves.

“One benefit of this is that we know the boat inside and out. We have such an intimate knowledge of her design and build that it has enabled us to troubleshoot en route in a way that we really wouldn’t have been able to do otherwise.”

First on the job list was removing a dozen fibreglass benches that lined the interior for the lifeboat’s intended 100 emergency passengers. “Then we set to work on making a cockpit,” Simmonds recalls. “If your ferry sinks off the coast of Scotland in a storm and you’re evacuated by lifeboat, understandably you’d probably like to be fully enclosed and as safe as possible.

“For our purposes, though, we wanted some external space where we could introduce a primary access door into the boat, store ropes and fenders, fish from and step into from the quayside.”

The pair designed a small sunken cockpit, cutting out a section of the superstructure at the stern, but as the lifeboat was intended for exploring Norwegian fjords in all weathers, the majority of the living space is inside. Having being designed for utilitarian levels of comfort, Stødig now features two symmetrical double cabins, additional bunks, a light-filled saloon and galley, and separate shower room.

“Although just 35ft long, it’s 35ft of very usable space. Critically it’s also got a beam of 3m, but it’s got that beam along the full length of the boat. So on a 35ft yacht you might have a 10ft beam but only in the widest part, whereas we have that from bow to stern really,” said Simmonds. 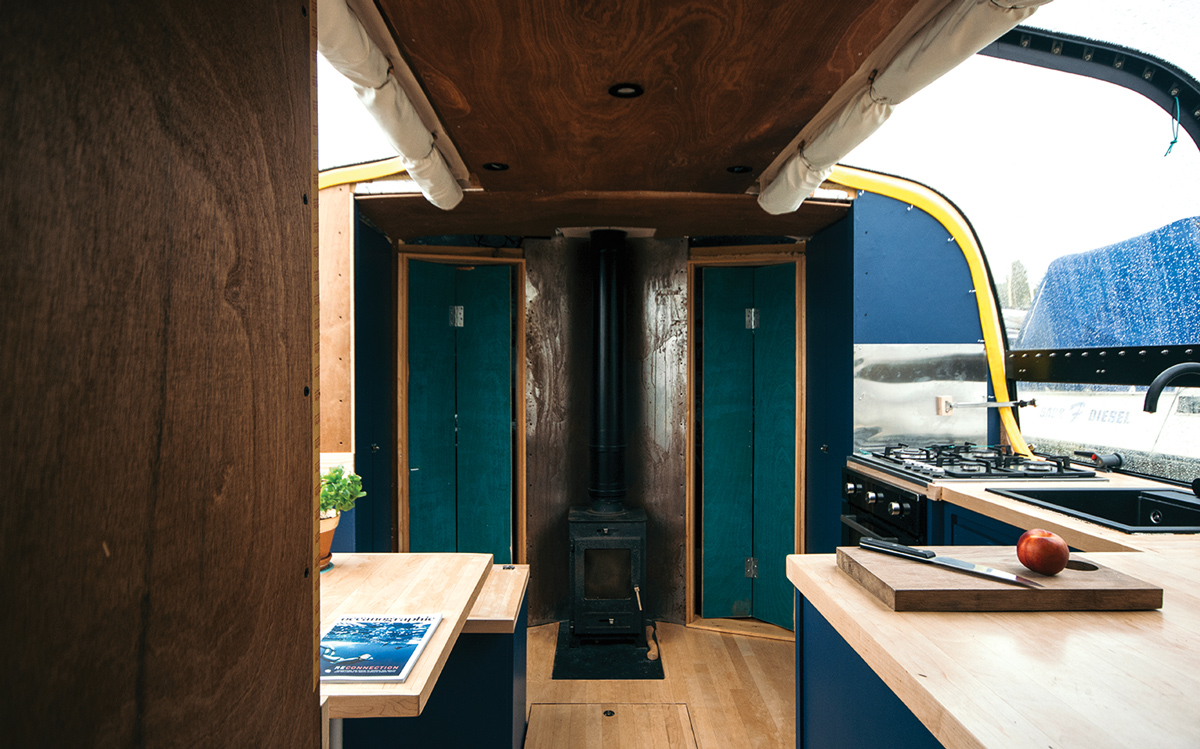 The saloon leads to the pair of symmetrical forward cabins, with a log-burning stove between

“That enabled us to put two double cabins in the bow, which you don’t get on any yacht really! We wanted to create quite equal amounts of space for both of us. Having grown up on sailing holidays and staying on boats there was always that discussion about who got the nice cabin!”

The saloon is made up of a galley to starboard and a seating area and table to port (which converts into an occasional double berth). “We were able to put the seating area and the kitchen opposite each other and make them both fairly generous, and still have quite a lot of floor space.

“When we’re packing for a ski or camping trip, or when we’re doing some work on the boat, we have so much floor space you’re not tripping over each other the whole time. That’s really appealing in terms of the liveability of the boat.” 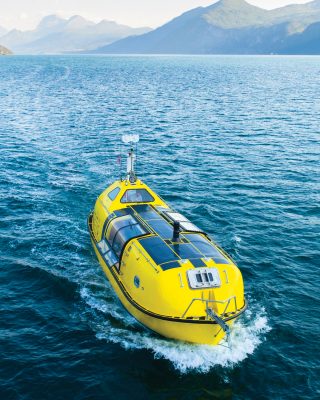 However the main feature of the saloon are two huge curved acrylic windows. “We have these big outlooks so we can see the mountains outside, but we also allow a lot of light in, and that makes the inside volume feel twice as big,” Simmonds adds.

Abaft the saloon there is a bunk cabin, a composting heads with separate shower, and stowage for essential items like skis. A wood-burning stove offers restorative warmth after snowy expeditions.

More high tech solutions came onto the boat through welcome sponsorship. “A lot of the high value products such as the electrical system and solar panels were donated,” Simmonds says, which boosted their initial budget by around £10,000.

They included lightweight stick-on solar panels from Sunflare that wrap around the curved roof, and provide 900W of power. There is also a small wind turbine from Giga on top of the lifeboat’s navigation mast. Stødig is almost entirely self-sufficient, and the pair estimate they have drawn shore power just half a dozen times.

In order to reduce the rolling motion, the pair added ballast to the lifeboat during the refit, including sandbags in the bilges. “The original boat when totally empty weighed just under 5 tonnes; it has a maximum weight of 12.5 tonnes when it has 100 people in it, because 100 people is just under 8 tonnes. We didn’t want to go fully laden but eventually, with all the conversion and ballast, I think that we’ve added about 3.5 tonnes. That’s a fairly back of the envelope sort of calculation.

“The shape of the boat means it’s never going to cut through the water, it is going to punch through as it has a fairly bulbous bow. But we’re quite happy, we’re glad we didn’t make it any heavier, but also no lighter because we’ve been in some pretty rough seas in the boat and it handled them very well.” 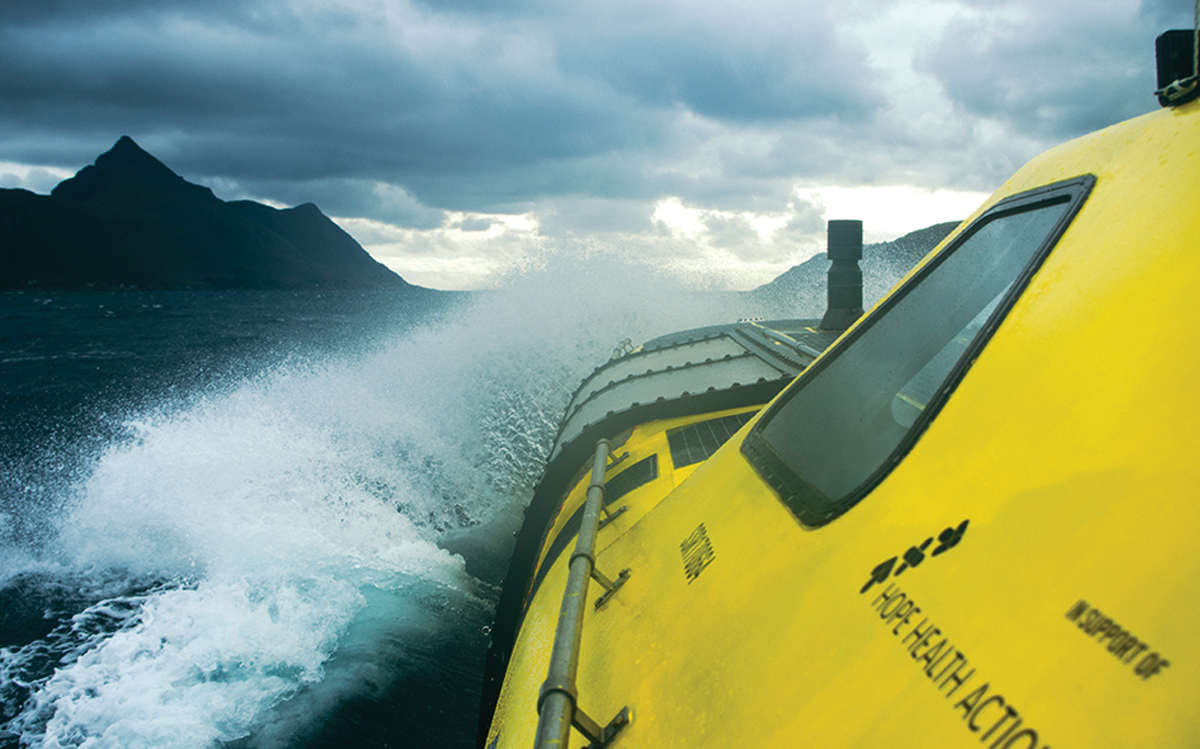 In May last year Simmonds, Schnabel, and Shackleton, Simmonds’s Nova Scotia Duck Tolling Retriever, set off for northern Norway from Newhaven, a 3,100-mile adventure. With a cruising speed of 6 knots on Stødig they first crossed the Channel, before heading up the Belgian and Dutch coastlines, and picking their way through Dutch inland waterways.

“We were very careful about our passage planning and opted for inland routes where we could. Doing this for a lifeboat did mean taking passage planning to another level to ensure we caught the most favourable sea states possible,” Simmonds recalls.

The close-quarter handling was more of a challenge. “It’s a bit like manoeuvring a large bus when you’re used to manoeuvring a Mini. With a yacht you can pivot the vessel around its keel but there’s no pivot point on a lifeboat and we don’t have thrusters. That said, we navigated through the Dutch canals for a week, we have been into a lot of the busiest marinas in Northern Europe and we didn’t have any incidents.” 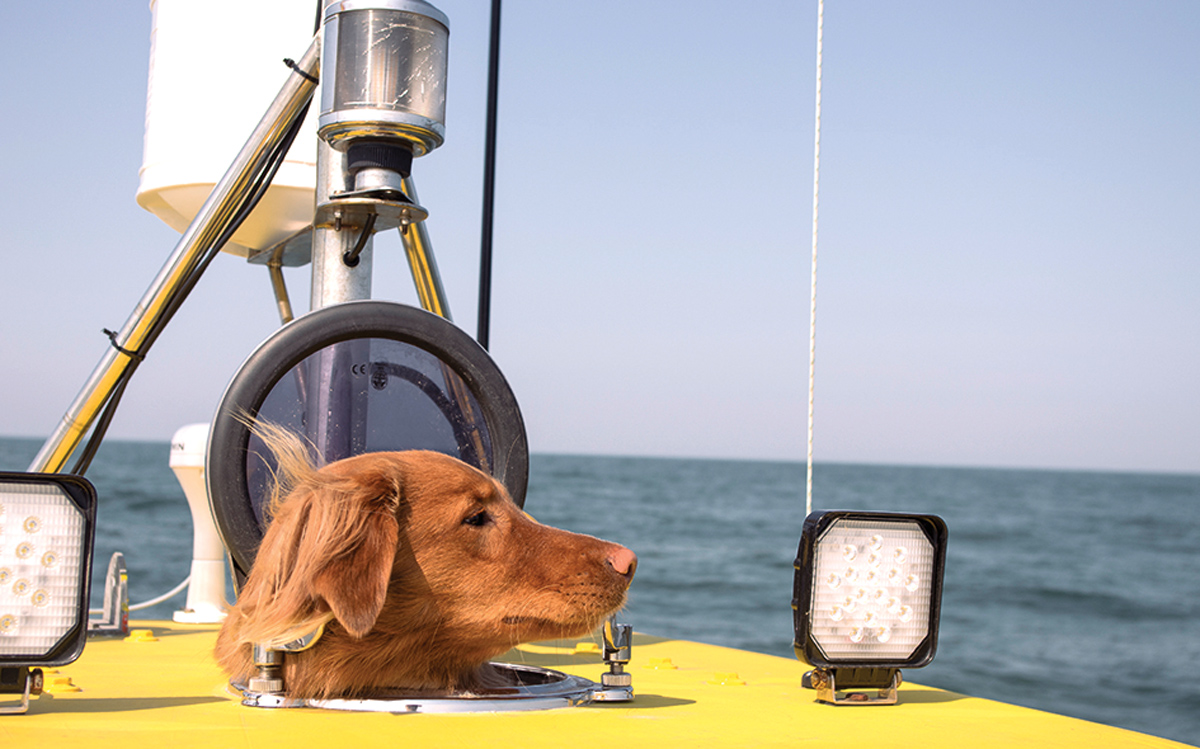 Shackleton, the resident Nova Scotia Duck Tolling Retriever, makes the most of the wheelhouse roof hatch

They transited through the Kiel Canal and then sailed north via Denmark before exploring the archipelagos on Sweden’s west coast. “The hairiest passage was an extremely rough crossing of the Skagerrak between Sweden and Norway,” recalls Simmonds, which saw them crossing in 4m waves. “We caught the tail end of a rather big storm. Lifeboats are tested in far worse conditions so though we had every confidence our home was up to it, we were very glad to reach dry land.”

Having reached Norway by midsummer, they have explored islands and archipelago as far as Tromsø, where they overwintered. “We found the most incredible anchorages – remote, peaceful and uninhabited – slung a rope around a tree stump or a rock and would barbecue on the water’s edge in splendid isolation.

“We could also reach spectacular waterways in Stødig, behind islands and in the fjords and explore passages that would be inaccessible to vessels with deeper draughts. Also knowing you have nearly an inch of fibreglass between you and the sea gives you a lot of confidence when it comes to sitting on the bottom or mooring up against cliff faces and navigating through Norway’s rocky and narrow passages.”

The post How two architects refitted a cheap old lifeboat into this Arctic liveaboard cruiser appeared first on Yachting World.