When Alan England found himself stranded in Greece without crew to assist his return passage, he made a rash decision he was soon to regret

It all started late in August 2009 at the unfinished Preveza Marina where we had berthed a number of  times over the years, the  cost being 200 cigarettes as payment to the unofficial manager.

However, a few days after our arrival, for no apparent reason, we were told to move berth and leave the next day.

The 200 cigarettes I offered as payment were refused. Maybe he had received a better offer?

Our Moody 376, Linga Linga was not happy at having to move – she refused to start and caused me to flood the engine, to which I panicked. 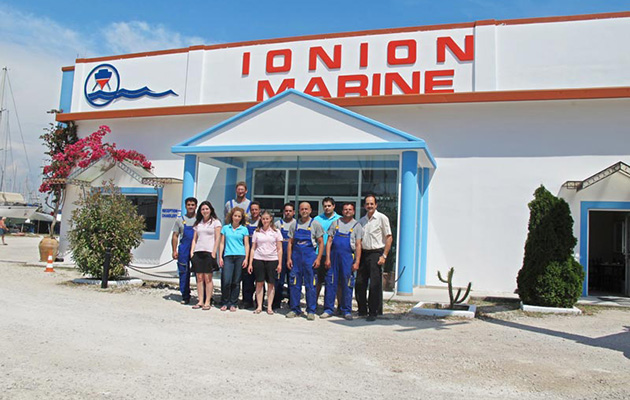 Spiros and his team helped get Linga Linga seaworthy again

Fortunately, I was able to get Preveza Marine Boat Yard [now named Ionian Marine] engineer Spiros, to inspect the engine.

The diagnosis  was loss of compression on one cylinder, which had obviously been  the cause of the poor starting we had experienced over the years.

The next problem was how to get  Linga Linga to Preveza Marine Boat Yard.

The following Saturday the cavalry arrived in the shape of my friend John’s Westerly Corsair, who towed  us across the bay and alongside the jetty.

Half an hour later Linga Linga was in a cradle with water and power.

I was most impressed by the helpfulness and efficiency of the yard.

At 0800 on Monday Spiros was banging on the boat saying he was there to remove the engine, and by noon it was in the workshop. 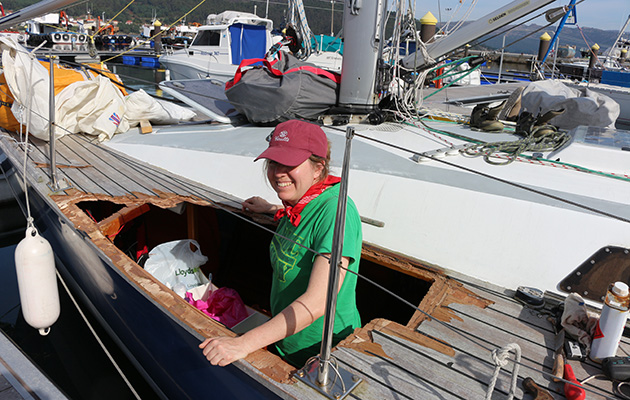 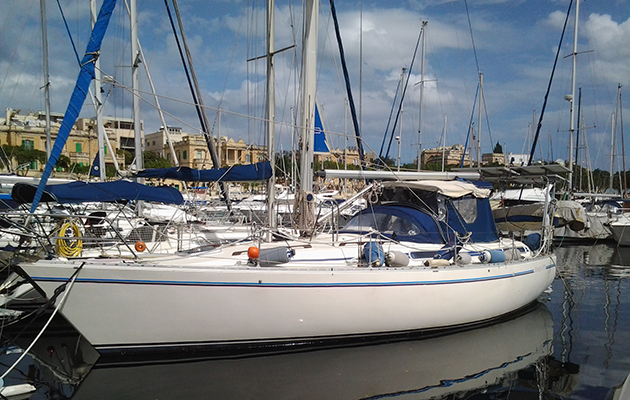 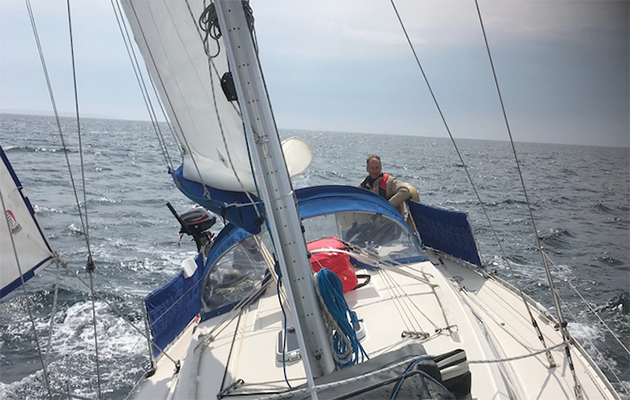 The following day the engine was in bits and spread out on the workshop bench like a jigsaw puzzle.

I wondered whether Spiros would be able to get it back together again.

No worries, I thought. Linga Linga should be fixed and in the water within a few weeks, in time to get my partner Rosemary back  to Malta by late September as promised.

Not so! Nothing in life is simple. Some  of the spares despatched were wrong and there were other problems.

Rosemary would have to fly back to Malta alone, leaving me without a crew. What’s more, my insurance did not cover me for single-handed sailing.

So, how should I go about finding  a replacement crew?

After scouring Preveza harbour, I managed to find  a mature English liveaboard who said  he was an ‘experienced sailor’ and had brought his yacht out from the UK. Perfect, I thought, and after a few drinks, a deal was struck.

I would pay for his flight from Malta to the UK, he would  be my crew and Rosemary would fly  to Malta. Problem solved, I thought.  How little did I know what was in store!

The days came and went with  ever increasing frustration. In mid-September Rosemary departed for Malta and then we would be into October and the bad weather.

At last, all the spare parts had arrived and Spiros could start reassembling Linga Linga ’s engine.

On 6 October the engine was re-assembled, but would she start? Oh ye of little faith, of course she would and she did!

The engine was re-fitted and ran successfully, with sea trials scheduled the next day and departure for Malta on the 9 October with a favourable weather window.

At 1600 on the 8 October Linga Linga was launched and underwent a successful 30-minute sea trial, achieving 15% more power. Things were looking good.

At 1900 the same day my crew boarded and I was presented with new problems; he was vegetarian and would not share the washing up. Not a good omen.

October is not the best month to  be sailing across the Mediterranean,  as I was soon to find out.

At 0700 on  9 October, on a ‘promised’ favourable weather forecast, we cast off to sail towards Malta. 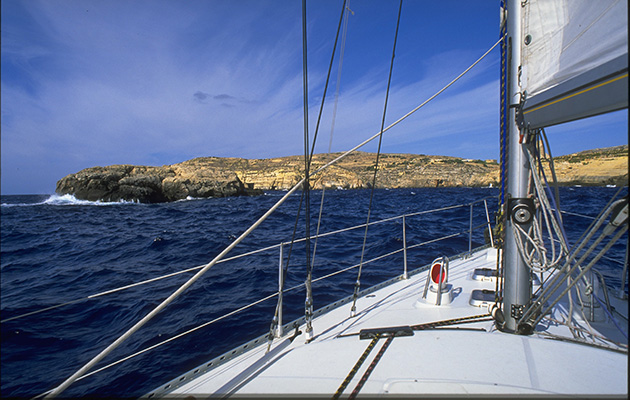 Alan and his ‘crew’ made it safely to Malta

However, I soon discovered that my crew had very limited sailing ability. The way he handled the mooring lines when we departed did not fill me with confidence.

All he seemed capable of was standing watch whilst I slept. However, the fact Linga Linga has an auto pilot meant this wasn’t a huge issue.

At first the weather was as forecast; NW Force 3-4, but at 2100 the weather deteriorated with the wind going round to SW and increasing to Force 5 with squalls.

This meant putting ‘iron lady’ on [the engine] and crossing my fingers that Spiros’ workmanship was up to scratch.

The weather was to remain unfavourable for the remainder of the voyage with rain, thunder and lightning.

Conditions deteriorated even further when we were 10 miles north of Malta,  with winds increasing to Force 7 and a very rough sea breaking over Linga Linga .

At 0800 on the 12 October 2009, having endured the three-day voyage  in the company of my ‘phoney’ crew member, Linga Linga eventually berthed at the marina in Malta.

I was mentally and physically exhausted, having had little assistance from the crew member I had engaged. Maybe I was getting too old  for this kind of life.

As you might guess, I was not very enamoured of my crew’s lack of contribution during the 365-mile voyage.

We had only managed to sail 70 miles, the remaining 295 miles was under engine, which did not miss a beat during the 60 hours it ran; well done Spiros. 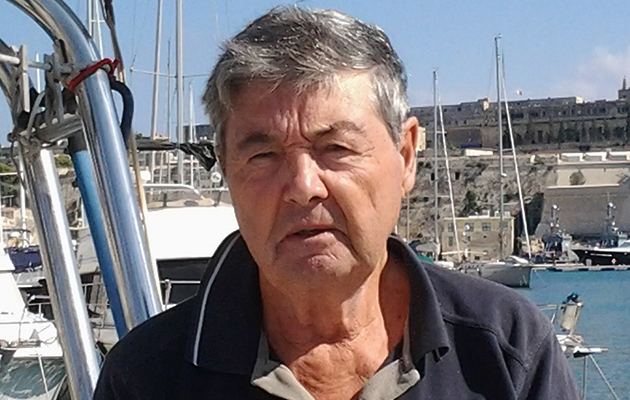 Alan England first sailed on a Cadet in Malta and went on to sail dinghies in the RAF. In 1989 he became a Yachtmaster and based their Moody 376, Linga Linga in Malta

However, my duties were not yet finished. I had to get my crew to the UK for the next day.

Only another 24 hours to get through, then I could relax, having fulfilled my duties…

I was woken at 0400 by my ‘phoney’ crew banging around in the cockpit above my bunk. His explanation was that he could not sleep.

With the noise he was making nor could I, and I was exhausted. That was the final straw and the end of any ‘relationship’ with my crew.

He was off Linga Linga pronto and didn’t turn up for his 0800 lift – his problem, I concluded.

The next day I received an email from him saying how pleased he was to have pulled the wool over my eyes regarding his lack of sailing experience; he had just wanted to get a free flight back to the UK!

It is only when you sail with a person that you learn their real capabilities and skills.

He wasn’t the best choice of crew, but what option did I have? After all,  I did make it safely back to Malta.

I placed too much credence on my crew having sailed his yacht from the UK to Preveza, and overlooked the neglected state of his yacht.

In hindsight this lack of care revealed his true nature.

Watch them in action

I should have had more interaction with my crew prior to departure.

Spending more time with him on the boat would have enabled a better assessment of his capabilities and would have prepared me for the problems I encountered during the voyage.

Luckily I had enough confidence in my abilities to safely complete the passage solo.

The post ‘I got taken for a ride by my counterfeit crew’ appeared first on Yachting Monthly.