Never in all my life had I expected to hear those words uttered from my own boat.

I had not even, in a lifetime of sailing, heard a live Mayday call, much less been part of one.

You prepare for it, you think about it once in a while and at some point undertake a VHF Radio course, but never do you actually think it will happen to you… until it does.

I was taking my Jeanneau Sun Odyssey 40, Julia Too on an early delivery cruise southeast from northern Greece, and eventually towards Marmaris in Turkey. 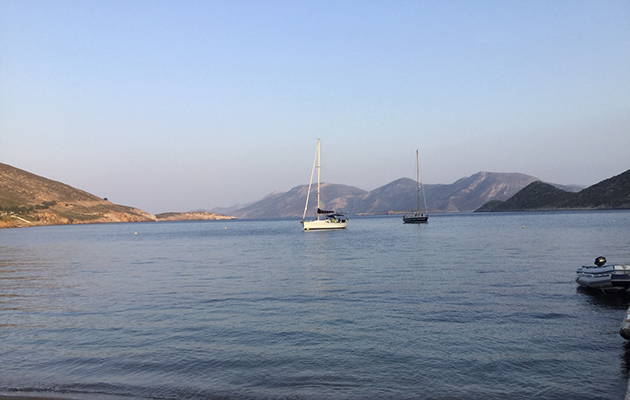 Michael was originally aiming for Xerokambos, an anchorage of Leros

It was a week-long cruise of around 300 miles or so with a friend of mine, Gordon Brassington, a retired senior police officer.

Although not a sailor, Gordon had done a fair bit of sailing with me across the Med over the last few years.

He is solid, caring and able, and reads my ‘ship’s briefing notes’ every time he comes on board. It’s a good job he does!

We’d had an easy passage so far leaving Skiathos in the northern Sporades and motor-sailing southwards with a rising wind astern towards Petreis on the east Coast of Evia.

We struggled into the small elderly harbour full of fishermen seeking shelter, like us, from a pestering northerly blow.

It was forecast to be local and short lived.

We found a spot out of the way and laid up for the next 24 hours, which gave us a little shore time to explore on foot the local coastline.

This is a pretty and remote corner of northern Greece with few visitors even in high summer. 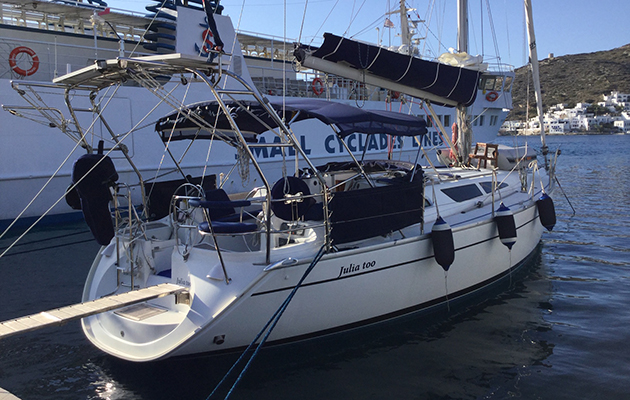 Julia Too moored in Amorgas harbour

A pre-dawn start was needed the next morning for an 85-mile daylight passage to Tinos town, with its busy commercial harbour and fantastic pilgrim church of Panagia Evangelistria.

We made it in good order and after a slightly later start we were off to Naoussa on Paros and then on to Amorgos.

After a lazy night spent watching the ferries come and go, we sailed to the tiny, sparsely inhabited island of Levitha where two families were battling the Greek government, who wanted to put wind farms all over this last completely unspoilt corner of the Aegean.

Being miles from anywhere, it would require the laying of vast electricity cables across the sea bed and fishing grounds.

There was a sheltered anchorage on Levitha, but it was too deep to anchor but mooring buoys had been laid.

We spent a gentle evening under the stars eating in a tiny taverna before wandering carefully back to the inlet across moonlit fields.

Next would be a short hop to Xerokambos on the southern end of Leros, our last night-stop before Gordon was to catch the plane from Kos the following evening.

So, we left at 9 in the morning for a leisurely three-hour motorsail with just enough downwind to hoist the genoa.

We sat jawing in the cockpit, enjoying a fine day and thinking about elevenses when quite simply I lost my thread!

My voice trailed away to gibberish. No pressure, no stress, then my hand simply went numb. I looked down and I couldn’t control it.

There was no pain, but it just would not work. My head felt funny. I could see Gordon looking at me.

My leg felt stiff, my arm was semi-locked in an extended position but I had no control.

I said to Gordon – only I didn’t as my speech had gone – I garbled ‘Gordon I’m having a stroke’.

I was slurring like a serious drunk and my coordination had gone. My leg had fallen asleep but strangely my mind was clear as a bell. ‘Steer 20 degrees to port,’ I gargled.

My crew could alter course on the auto-pilot but had no idea where we might be headed.

I needed a hospital. I needed it fast. I was slipping away, I could feel it. With my last gasp I muttered ‘Mayday’.

Gordon fell down the companionway as I disappeared under the cockpit table.

My only thought was ‘Oh. This is how you die; it’s really quite nice!’ I was gone. 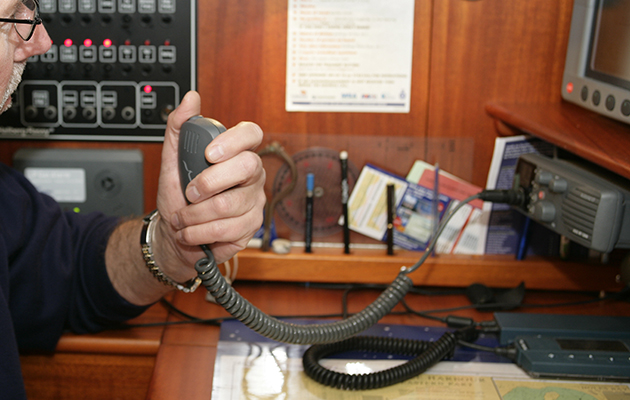 Michael never expected to have to do a Mayday for real, but had briefed his crew and had an aide memoire next to the VHF

Gordon, using notes pasted some 12 years earlier on the panel by the radio read the script: ‘Mayday, Mayday’.

Olympia Radio came straight back. Gordon read them the numbers from the chart-table GPS. Olympia Radio asked, of all things, for our phone number.

I could hear this on the deck speaker. I was frozen to the spot.

In my mind I knew death was just behind a big black door, only waiting for the handle to be turned. I was still strangely lucid, or so I thought.

I had a clear mental picture of the Leros coast and the position of Lakki harbour with its two marinas half way up the western side of the island.

Out of the blue I remembered the words of Tom Cunliffe in his Yachtmaster books: ‘Even if you haven’t plotted it you should have a mind’s eye picture of your estimated position’.

Words from long ago but an approach I had always favoured.

That picture was magically clear in my mind, nine miles out, an hour and a half to run but I needed to confirm the course with Gordon to our emergency destination.

I must get to the chartplotter to confirm my course. I managed to drag an un-working leg across the deck as Gordon came up from below.

He wanted so much to help me but there was nothing he could do. I found the strength to reach the cockpit seat. 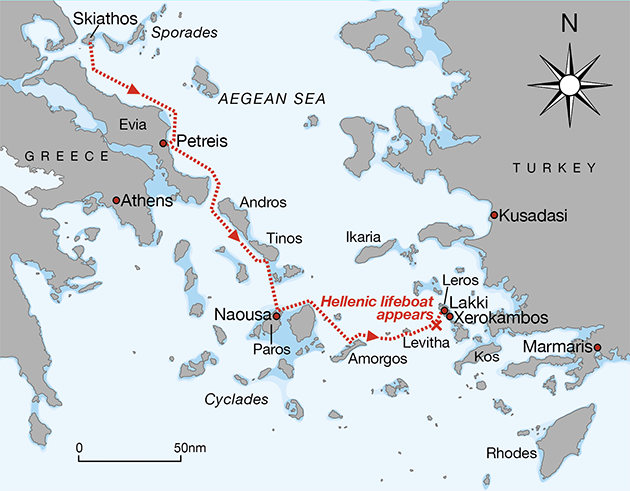 I got a finger from my left hand on the chart plotter, showed him the simple plan and garbled him a final course.

Olympia Radio called again. I replied on the deck handset. ‘What is your position?’ they asked. In my confusion I had Gordon give them the waypoint at the bay entrance, eight miles away!

I pointed out the chartplotter GPS co-ordinates for him to read off, not being able to understand why they were not happy with our position.

Soon after, my voice came back, my arm moved and I surfaced from some deep abyss.

The mobile rang. A gentle female voice said, ‘Good morning, are you the captain?’ I stood down the Mayday to a Pan Pan Medico.

But this is Greece with a maritime system which in all my 14 years in these waters I had never thought worked.

I was wrong, for on the horizon was a true and proper lifeboat, all orange and black, just like the RNLI at home.

She rounded our stern and came up smartly on the rear port quarter.

On deck, though, was no smiling lifeboatman; just a row of pistol-toting Hellenic coastguards swinging on their railings, waiting for an order to leap 10ft down into my cockpit to take over my ship.

No way, I thought, and eased Julia Too away to starboard.

‘Hellenic lifeboat this is Julia Too on Channel 16, please bear away.’ No reply. They use, as I learned later, Channel 11 and don’t even monitor 16.

Their captain appeared on the bridge with a loudhailer ‘Come wiz me’.

With Gordon steering and the engine pounding, we raced to keep up for the next hour to Lakki marina. 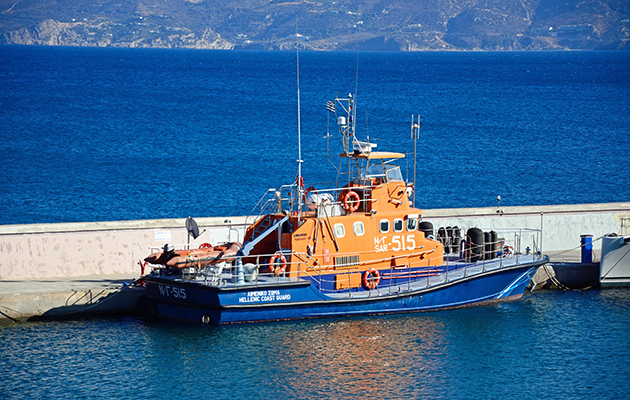 The Hellenic lifeboat looked similar to those of the RNLI. Credit: Alamy

In what seemed like the blink of an eye we were in the harbour. I managed to berth stern-to and the staff leapt aboard to secure us.

The lifeboat captain took my signature and inspected my passport.

I was exhausted and disorientated, but managed to shuffle towards a car in which Anna, the helpful base manager, used to take me to ‘hospital’.

She translated my symptoms to a medical orderly, who connected me to a drip and left me to my stupor.

Anna stayed with me until a doctor arrived. My wife, Julia, by this time was in a taxi to Heathrow. 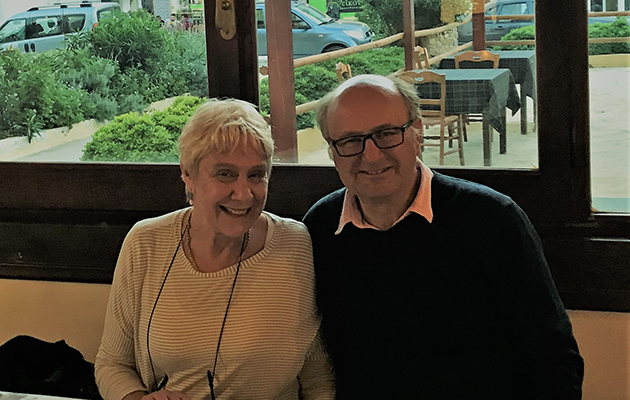 Michael’s wife Julia with him two days after the stroke. It was a difficult experience for her too, having to fly to Greece not knowing how he was

Miraculously, I was released 24 hours later, groggy, but with everything in working order.

I spent three days in Leros then flew back to London to a fabulous NHS stroke clinic.

After a series of tests, I was declared a very lucky man with no permanent damage and a new drug regime under my belt.

Now, after a four-week driving and flying ban, I’m allowed to return to my boat and complete my belated delivery of Julia Too.

Julia, my long-suffering and eternally loving wife, has told me plainly she has no intention of doing another mercy dash across Europe to save me from this blasted sailing lark!

I was lucky I had Gordon as my crew on board. Given that I frequently sail solo the Greek gods were definitely on my side that day for I simply would not have managed alone.

Briefing crew is vital. We carry a detailed set of briefing notes including how to start the engine, how to make a Mayday, man overboard et al.

Gordon did very well, showing how important it is to brief your crew on reading a GPS position, using the VHF radio and the Mayday prompt card.

Keep up to date Gordon suggested I rewrite my radio procedure briefing note to bring it into the 21st Century, which I have done.

When the original radio was replaced about five years ago I had omitted to update the ‘turn on’ procedure, which caused a minor delay as Gordon had to locate the switch.

I carry an EHIC card fixed inside my passport. A note of this was taken by the clinic who refused my proffered travel Insurance.

In Turkey as a tourist you would not be treated without a valid travel insurance certificate.

As a rule you would not be admitted to a state type hospital but only a modern private hospital with full facilities where they check your insurance on admission.

I have learned that anybody can suffer a stroke at almost any time.

There is very little first aid treatment that can be offered except to recognise it  (FAST: face, arms, speech, time) and to seek professional intervention urgently.

As my wife travelled, she received medical advice that aspirin would help thin my blood, as would lying down and resting.

The post ‘I needed a hospital. With my last gasp I muttered Mayday’ appeared first on Yachting Monthly.