Do boats sail faster in fresh water or salt water? The SailGP teams in Chicago have the answer…

Do you sail faster in fresh water or salt water? It’s a question you’ve probably never had to ask yourself, but it’s one the SailGP teams in Chicago this weekend have been delving into.

Explore the question for conventional sailing boats and you’ll come across a couple of differing arguments, one being that the increased density of salt water equates to increased buoyancy, so for heavy displacement yachts (and particularly large ships), less volume of boat is in the water, so reduced drag equates to increased speed.

The other view is that the increased density of salt water equates to increased resistance moving through the water, and slower boat speeds. Either way, for most yachts and sailors any difference is likely to be negligible.

The only way to settle the discussion is with real, empirical evidence, and if there’s one sector of sailing which has endless data on relative boat speeds of multiple, equally matched boats in different sailing areas, it’s SailGP. 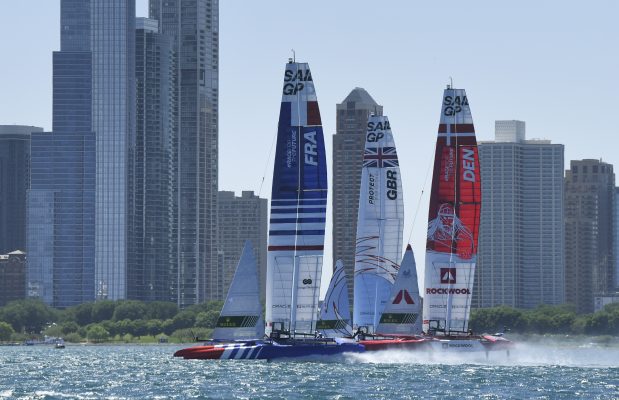 Ahead of today’s first day of racing for the Chicago stage, the 10 teams have been training on inland Lake Michigan, and recalibrating foil handling for sailing on fresh water has been a key focus. There’s no question that for the foiling F50s, fresh is faster.

“It’s about 2 knots difference,” Russell Coutts told me after the pre-event press conference.

“They have to be selling a little faster for the take off, but the top speed is about 2 knots faster. It’s a pity we’re not going to get a windy weekend because we probably would have seen a new top speed here, because it’s interesting that the onset of cavitation, according to the analysis, is about half a knot faster.” 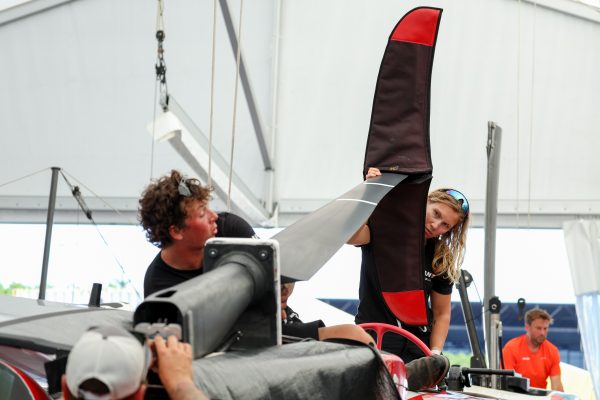 The F50s have a number of foil and rig combination options. Canada SailGP Team work on their F50 catamaran ahead of T-Mobile United States Sail Grand Prix in Chicago. Photo: Simon Bruty/SailGP.

Ben Ainslie, skipper of Great Britain SailGP team, confirmed: “We weren’t on the fastest configuration [in training] because we had the large area rudders on, but we got 92kmph yesterday [49.6 knots] and I’m pretty sure with smaller area rudders we’d have been nudging 100 kmph [53.9 knots]. So it’s a couple of knots faster.

“It probably takes a bit more speed to get the boat up on the foils, but once you’re up it’s slightly less resistance.” During pre-race training, one element the Great Britain team were focussing on was calibrating take off speeds for fresh water in light, sometimes marginal flight conditions.

Unfortunately, a new F50 top speed is unlikely this weekend, despite the fresh water advantage. After the strong gusts of Thursday which saw Ainslie’s Great Britain team nudging 50 knots in training, and SailGP Canada knocked over in a capsize whilst paused alongside a support RIB, yesterday’s practice races were held in gentle conditions that saw the F50 teams racing in light wind four-crew mode despite having their practice course moved outside Chicago Navy Pier’s breakwater. 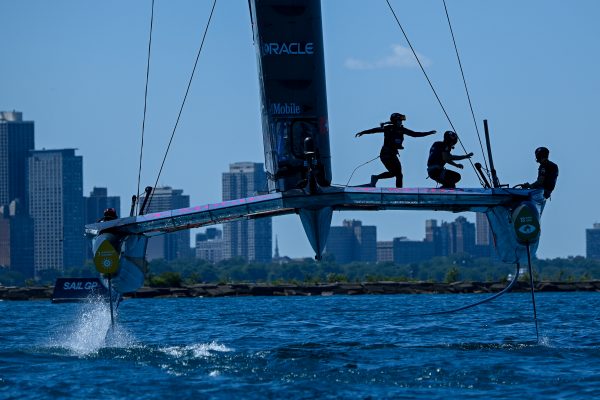 Today’s racing, for the second event of season three, will take place inside the breakwater with forecast breezes of 9-12 knots. It’s a tight racecourse under the iconic city skyline and should deliver classic Sail GP nip-and-tuck competition.

The post Is fresh water or salt water faster to sail in? SailGP teams find out in Chicago appeared first on Yachting World.