Jean Le Cam was already a legend, now he’s the undisputed hero of the Vendée Globe, having massively outperformed his boat in the last edition of the race and making an incredible mid-ocean rescue of fellow competitor, Kevin Escoffier, writes Ed Gorman

He’s the solo skipper who might remind you of Keith Richards. A rugged, hawkish face topped off with an unruly mop of black curly hair, Jean Le Cam was the rockstar of this year’s Vendée Globe. When he finished, he danced, fists pumping the air, to French rocker Johnny Hallyday played loud as he made his way up the channel of Les Sables d’Olonne.

Appearing on the race’s live video calls, Le Cam updated his fans with a self-conscious grin and the famous twinkle in his eye. “Clack, clack, clack,” he would mutter, mimicking the rotating camera as it spun to show outside his beautifully optimised IMOCA 60 (which he refers to as ‘Hubert’). “Why are you looking at me?” he demanded in his gravelly voice, scowling into the lens.

‘The King’, as he is known, surprised a lot of people by running in the top 10 all the way around the world and then finishing 4th overall in his fifth Vendée Globe. That’s because, at 61, Jean Le Cam was the oldest skipper in the fleet and his daggerboard-configured boat (the 2008 Farr design that Michel Desjoyeaux won with in 2009) was not one of the latest foiling models. 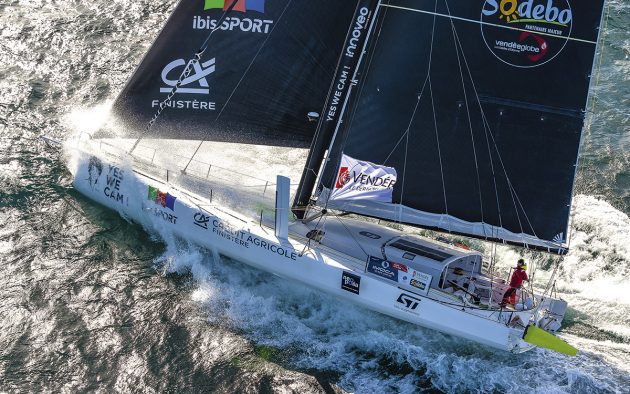 Jean Le Cam sets out at the start of the 2020/21 Vendée Globe aboard his IMOCA 60 YES WE CAM! Photo: Jean-Marie Liot/Alea/YES WE CAM

But those who know him were not in the least bit surprised. What they saw was the evergreen Breton legend bringing his usual ingredients to bear: immaculate preparation, a racecourse he had encountered four times before (solo, as well as double-handed and crewed round the worlds) and self-confidence in his own ability, born of a 40-year career at the top of professional ocean racing.

Jean Le Cam earned his ‘King’ nickname thanks to his utter domination of the Solitaire du Figaro circuit 20 years ago, which he won three times. He is one of those unreconstructed characters in French sailing (Francis Joyon is another) who has never tried to change his natural persona to meet the needs of commercial backers.

Outspoken, and a man who loves a drink and a smoke, he can be, by his own admission, a pain in the arse. But his relationship with boats and the sea gives him a unique aura. He has a knack of explaining why he loves sailing, and what motivates him, that people find compelling.

When he reached Les Sables d’Olonne at the end of January, he was exhausted by the stress of worrying whether his boat would fall apart before he got there (due to delamination issues he only revealed at the finish), his diction slurring. Yet Le Cam spoke like a philosopher about why he is still doing the Vendée Globe – and who is to bet against him turning up again in 2024?

Le Cam was born in April 1959 into a Breton family living near Port-La-Forêt, where he would go on to play a key role in establishing the world renowned offshore racing school and the CDK shipyard, now one of the top composite yards in the world. 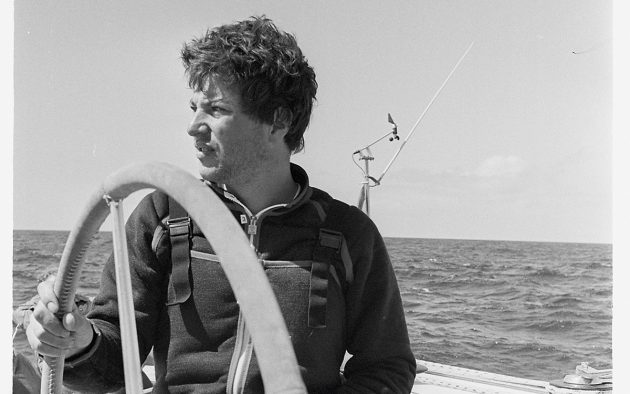 One of three children, Jean Le Cam sailed dinghies as a boy and on the family keelboat with his father, competing in local races. He clearly had a natural affinity with the sea, but what really fascinated him were the technical elements, and working on boats to maximise their performance.

In his early 20s he was part of Éric Tabarly’s crew in the 1981 Whitbread Round the World Race on Euromarché. He went on to become a regular on the Figaro circuit, winning the solo multistage title in 1994, ’96 and ’99. He was Formula 40 champion three times, raced on multihulls with Philippe Poupon and Philippe Jeantot, competed in the ORMA 60 class and crewed on Alain Thébault’s record-breaking speed machine Hydroptère. 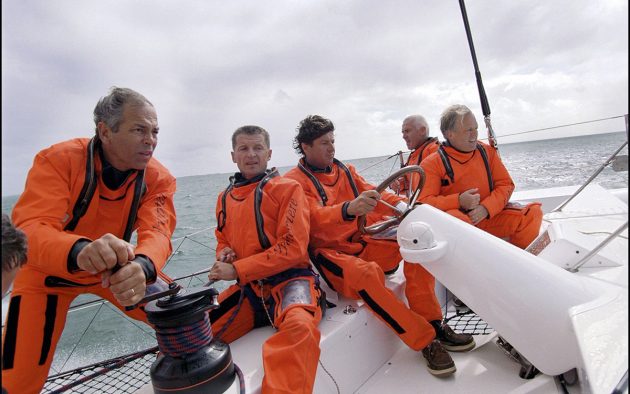 In his first Vendée Globe in 2003-04 Le Cam finished 2nd on Bonduelle behind Vincent Riou. Four years later Riou saved his life after Le Cam’s boat VM Matériaux lost its keel bulb and capsized 200 miles west of Cape Horn, while racing in 3rd place. Le Cam would later say his best ever memory at sea was seeing Riou’s PRB approaching, as he emerged from his escape hatch in his survival suit after waiting for 16 hours in his upturned hull.

Returning to the race again and again, Le Cam was 5th on SynerCiel in the 2012-13 edition and then 6th on Finistère Mer Vent four years ago.

Le Cam’s great friend and fellow sailing legend, Roland ‘Bilou’ Jourdain, has known Le Cam since they were teenagers. Jourdain says Le Cam has two qualities that set him apart: his understanding of the technical side of the sport and his uncommon feeling for a boat.

“He belongs to the boat and the boat belongs to him, if you see what I mean,” he explained.
But, Jourdain added: “Jean needs the sea. He needs to be on the water. He’s a Dr Jekyll and Mr Hyde. He says a lot, he can be a real pain and can sit in the corner complaining, but he needs his fix and sometimes, between Vendée Globes it can be hard for him.” 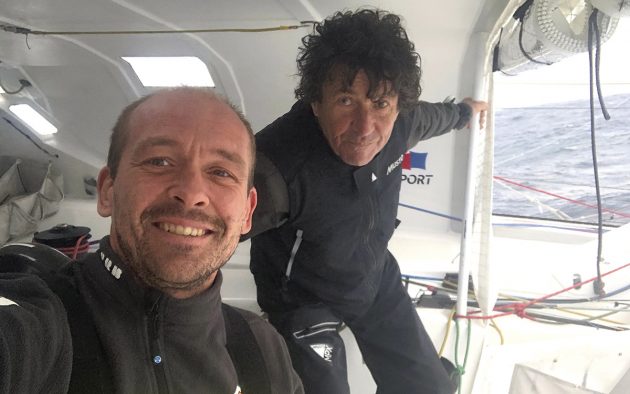 Kevin Escoffier gained a unique perspective of Le Cam’s approach to solo sailing, when he lived in close quarters with him for five days after Le Cam rescued Escoffier from the South Atlantic. He says what struck him most was the way Le Cam does not get obsessed with detail.

“The way he sails, he tries not to zoom in too much, but to have a big picture of what he wants to do and what he can do with his boat,” explained Escoffier. “He looks forward to doing the best thing, not only for the next few hours but for the next few days.”

Escoffier was impressed by how on top of everything Le Cam was, pre-empting problems. He added that Le Cam carries the bare minimum of kit on board – what he needed and nothing more. Tactically, Le Cam does his own thing. “He will follow his own path and do what he thinks is right,” Escoffier noted.

For someone who has prepared his boat so assiduously, contending with serious delamination issues will have been tortuous. “[After] Kevin disembarked there was a big front,” Le Cam explained after the finish. “I went to the bow and inside the hull, the boat was delaminating. The hull had moved about 5cm and you are afraid that you are going to sink. I repaired the bulkheads, I cut out the ballast and had carbon everywhere.

“Since then, [I couldn’t] slam and bang. Every hour you are telling yourself that you don’t want to go on. Even the day before yesterday I told myself, I can’t do anymore. You open the hatches and see what is happening every time the boat hits on the waves. It was terrible. And finally I managed to finish. Hubert brought me back home.” 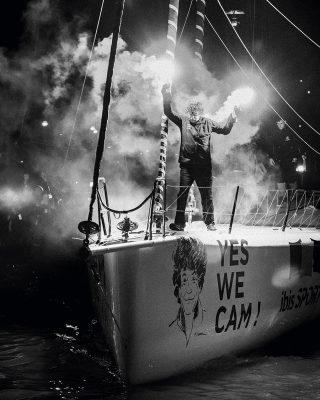 Despite the structural issues, Le Cam was within 200 miles of the leaders when he recrossed the equator, and finished on the same day as the winner, Yannick Bestaven (Le Cam finished 8th, and both he and Bestaven received time in redress for their part in Escoffier’s rescue, awarding Le Cam 4th overall).

Bernard Stamm, the Swiss ocean racer who won the double-handed 2014-15 Barcelona World Race with Le Cam, says his old friend is a master at sailing the shortest course with the minimum sail area.

“Jean is somebody who does not like to hurt his boats,” said Stamm. “He doesn’t like to over-charge the boat. He prefers light or medium conditions and is able to sail with less sail area than others.”

Stamm recalled racing with Le Cam for three months was fun, despite a growing list of problems on board. “He is somebody who listens a lot,” he said. “Even if he doesn’t agree, he listens and then afterwards gives his opinion.”

Marcus Hutchinson, who managed Thomas Ruyant’s Vendée Globe campaign, has known Le Cam since the late 1990s on the Figaro circuit. He believes Le Cam is the ultimate single-hander. “In terms of preparing a boat properly, preparing yourself, anticipating correctly, imagining all the scenarios – he’s a commensurate all-rounder who has been right at the top of his trade for the last few years,” said Hutchinson.

Hutchinson recalls Le Cam on stage in Concarneau, having just won his third Figaro, and being asked why he kept coming back to sailing alone. “There is only one way I can show you,” he told the presenter, “and that’s for you to come with me next time. But unfortunately you can’t because it is a single-handed race so, unless you do it yourself, you will never know…”