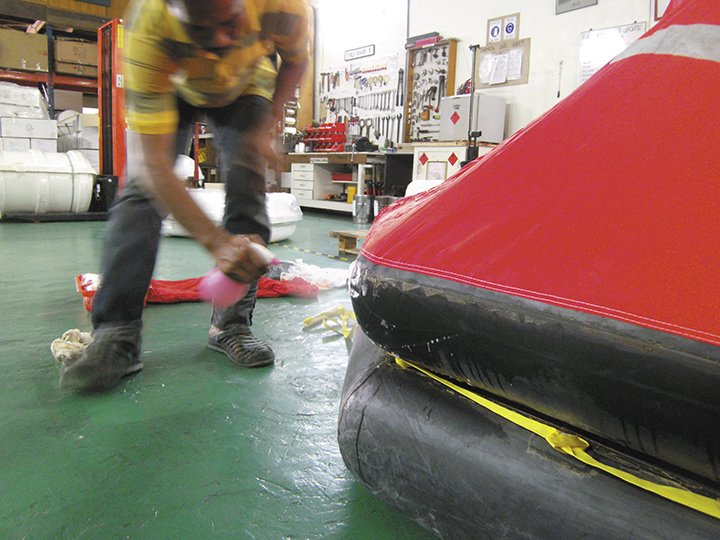 Spring is when many sailors have to bite the bullet and have their liferaft inspected, an expense that costs 10 to 30 percent of the price they paid for the raft-or more.

In the U.S., there is no inspection requirement for liferafts on recreational boats. Inspection guidelines are set by the manufacturer. In Europe and other parts of the world, rafts for recreational boats that sail offshore are supposed to meet ISO Standard 9650-1. This standard allows for an inspection interval of up to three years, but manufacturers often specify shorter intervals, especially for boats that spend most of their time in the tropics. For some rafts, the three-year interval only applies to the first three years after purchase. After that, annual inspections are the norm.

The experience of the owners of the 14-year-old, six-man, valise-stored Avon liferaft pictured here reminds us of the importance of following the manufacturers inspection schedule, however onerous and costly it might seem.

The pictures were taken in Malaysia, less than four years after the rafts previous full inspection in New Zealand. The hand-glued neoprene raft had a 12-year-old warranty when it was bought new in 2004. According to the service experts at Zodiac, Avon rafts of this make and model are supposed to have annual inspections. However, because the interval can be as long as three years in newer models, it is not surprising that some owners (and even some inspection stations) are not aware of this. Regardless, the owners of this particular raft, like many cruisers, waited nearly five years between inspections. It was condemned, and the failure to follow inspection schedule, as well as the rafts age, voided any warranty coverage.

The owner’s experience raises an important point about purchasing a liferaft. When respected brands are passed between investment groups and production is moved overseas to save costs, quality control and service support can suffer. Although we were unable to confirm the country of origin of the above raft, experts we spoke with said it probably came from a plant in Hungary, where some manufacturing was moved after Avon was purchased by Zodiac. We were also told that during this period, some lightweight aviation rafts were repurposed as “marine” models, which are typically made of heavier materials than aviation rafts. In the past, other manufacturers have also slightly modified aviation models for the marine market.

When it comes to any liferaft, service support is just as important as the raft itself. In fact, many liferafts are sold with very small profit margins, with the expectation of additional profits through routine servicing. It is important that you have a clear picture of warranty coverage and inspection costs in your cruising area before investing in any liferaft.

A pioneer in the world of inflatable boats, Avon was acquired by French competitor Zodiac in 1998. Zodiac stopped making Avon liferafts in 2004, and then scaled back to two Zodiac brand life rafts. Emerging from bankruptcy in 2015, the company, now known as Zodiac Nautic, introduced two new liferafts this year.

To complicate things, several Zodiac-related brands have been spun off, and there is another Zodiac liferaft on the market. During the economic downturn, British-based Survivetec acquired the Zodiac brand for commercial (SOLAS) life rafts, sold under the SurvivetechZodiac label. The company also stepped up its acquisition of several other liferaft brands. The companies now under the Survivetecs umbrella include Survival Offshore Systems (Australia), Crewsaver (U.K.), DSB (Germany), RFD-Beaufort (United Kingdom), and Revere Supply (U.S.).

A State of Flux

With the world of inflatable boats in such a state of flux, it is important to know what you are buying, from whom, and the quality of service support you will get. Well-established brands that also serve the commercial market have worldwide service support, but not all stations are trained to inspect and service recreational rafts-one reason why we recommend a SOLAS raft for worldcruisers. Although we were not able to confirm this, it appears that several of the inspection companies listed at the US Coast Guard’s Maritime Information Exchage that are certified to inspect Zodiac liferafts abroad, actually fall under the Survivetec umbrella. It is not clear if all of these SOLAS-compliant facilities on this list are authorized to inspect Zodiac’s new recreational rafts. Zodiac’s list of approved facilities for the new recreational rafts is available here. Having a SOLAS-trained technician inspect your liferaft is not necessarily a bad thing, but most liferaft manufacturers require you use their certified inspection stations to maintain warranty protection.

The elastomer used to make the Avon liferaft pictured above is chloroprene rubber (CR), also known as neoprene. Another elastomer common among inflatable boats is chlorosulfonated polyethylene (CSM), known by the brand-name Hypalon. It appears that the materials coating has failed, possibly due to age and folding stresses during vacuum bagging.

Zodiac Nautics new liferafts are made of plastomers, and the company is working with the owners of the raft in these pictures to provide a replacement. The new offshore model is polyvinyl chloride (PVC), and the new coastal raft is made of polyurethane (PU). In both types, the seams are thermo-welded, a reliable way to join fabric that also reduces labor costs. One drawback to plastomers, especially PVC, is that the plasticizers can migrate to the surface and make the outer coating sticky, especially in hot climates, although this is less of a problem than it once was.

If you are buying a new life raft, Volumes One and Two of our Survival at Sea ebook series offers hard won advice. The ebooks are part of a recently updated four-volume set, Survival at Sea, available at www.practical-sailor/books. For more guidance on liferaft inspection, see Liferaft Inspection, an Inside Look, PS February 2013.

If your liferaft is up for inspection in the coming year, you can often negotiate a cheaper price and surely get faster service if you do it in the late summer, fall, or winter, after the spring rush in the recreational market.