X-Yachts has investigated why an X4.9 yacht was abandoned mid-Atlantic after steering failure and taking on water and published their findings

X-Yachts has released findings into an investigation into the events that led up to the yacht Brainstorm, an X49, being abandoned in the ARC January transatlantic crossing.

X-Yachts’ director of design and engineering, Thomas Mielec, has concluded that a loose grub screw led to the rudder stock coming out of the top bearing, with a subsequent loss of steering. The movement of the loose rudder stock then damaged a GRP tube which encapsulates the bottom bearing and forms a water seal towards the inside of the boat, which caused it to leak, and the yacht to take on water.

The damage occurred on 18 January. The crew of Brainstorm contacted X-Yachts by satellite phone and were able to steady the water ingress to a level that the bilge pumps could keep up with. However, they were only partly able to secure the top of the rudder stock and, with conditions anticipated to worsen, the decision was made to abandon the yacht. Fellow ARC participants What’s Next, and Rhapsodie VI were diverted to assist. 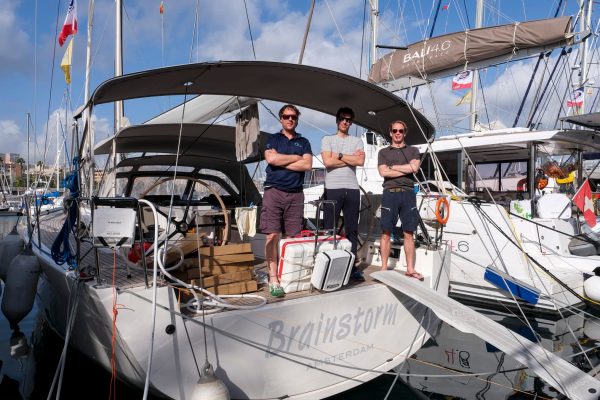 Brainstorm crew before setting out on the ARC January from Gran Canaria to St Lucia. The yacht was later abandoned following steering failure, then recovered. Photo: WCC

Chris Line, skipper of What’s Next, a Jeanneau Yacht 54, described the rescue on the event blog: “We arrived on station close to midnight and four very ingenious Dutch crew had managed to stem the flow of water for the time being, although [it] could fail completely at any time. After considering all options it was agreed that it would be safer for everyone to effect a rescue and transfer of crew at first light.

“Although the sea state was light to moderate the swells were still up to 2 metres and it was pitch black. We killed our engine and kept a mile down wind of them standing by in case the situation worsened. In these conditions the boats are not comfortable places to be! The rolling and banging as waves hit you on the beam is exhausting, especially for Brainstorm’s crew who were still trying to keep their boat afloat as long as they could.

“The following 12 hours was definitely a time where you realised how fragile life is and how insignificant we are when at the mercy of mother nature and the vast oceans. Although the communications continued with search and rescue, ARC control and other vessels very little was said on What’s Next. Everyone knew what to do and we all hoped that luck would hold out at least until daylight.

“I am pleased to report that early afternoon Brainstorm’s crew were successfully transferred to the relative safety of What’s Next and another ARC boat, Rhapsodie, who arrived to assist at midday.

“We now have a crew of six instead of four and we treated ourselves to a small beer with dinner tonight with our new companions – coincidently as we crossed the halfway point in what is turning out to be a challenging adventure. As we left the scene I felt desperately sad for the captain and crew of Brainstorm. The planning and emotional investment that goes into a once in a lifetime adventure like this is immense.” 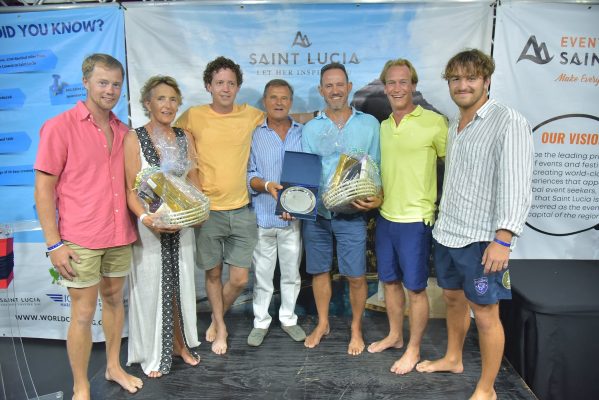 The What’s Next and Rhapsodie crews honoured for their seamanship at the ARC January prize giving, after going to assist the crew of Brainstorm. Photo: WCC

Fortunately, four days after the yacht had been abandoned, a salvage company found Brainstorm, using its YB Tracker. X-Yachts reports that the generator had stopped, but the bilge pump was running and the water level in the boat was still below floorboard level. The salvage crew was able to reposition the rudder stock in place and secure the top rudder bearing, repair the leak and pump out the water. Brainstorm was then towed to Gran Canaria, approx 1,400 miles east.

X-Yachts’ design and engineering director Mielec, together with representatives from the salvage company and insurance companies, met the yacht on arrival, and worked to identify the cause of the damage.

He explains: “The crew from the boat took photos and video in their attempt to repair the rudder, and it appeared that the top bearing had separated, and the rudder stock had dropped down. The rudder bearing union nut, which holds the bearing together, had simply turned off the thread at the bottom of the inner housing, and this meant that the rudder and rudder stock, which are otherwise fixed in the bearing, had dropped downwards and out of the bearing.”

”This happened even though the locking screw was in place in the union nut, and that with only one impression mark, i.e. without traces or burrs, which could indicate that the union nut had been turned off with the locking screw engaged. The other parts of the bearing showed no signs of overload prior to the incident in general.” 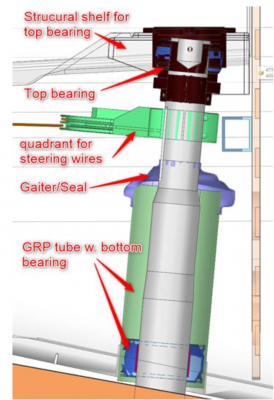 Diagrams from X-Yachts of the X4.9 steering system components. 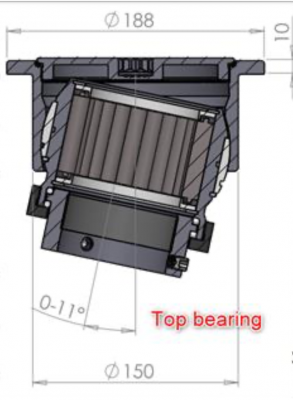 Mielec believes it is too early to draw a definitive conclusion of the cause of the damage. However, he suggests two possible scenarios. Either, in error, the locking screw was never secured with Loctite during manufacture of the bearing, and that the screw had loosened unnoticed over a period of two years, also allowing the nut to unscrew. Alternatively the safety screw may have been removed / loosened by mistake during service work, which was carried before the ARC in November. X-Yachts is working to establish if there are any traces of Loctite on the locking screw.

X-Yachts adds that: “The locking screw in question is only intended to be operated during the manufacturing of the bearing itself, and it is not necessary / permitted to touch during either assembly or possibly disassembly of the rudder in the yacht.”