We’re used to relying on our engines, but could you get home without one? James Stevens shows how it’s done

Whenever I think RYA training has been a huge success I am brought down to earth by the depressing statistic that the main cause of lifeboat callouts to auxiliary yachts is mechanical failure.

This usually means the engine has packed up on a sailing yacht.

The cause of the failure is sometimes pretty basic and easily solved, perhaps with a can of spare fuel, but sometimes even Dr Diesel would be unable to fix it at sea.

If a sailing yacht skipper is unable use the engine they should be able to get themselves within striking distance of an engineer by sail power alone.

It might involve anchoring and waiting for wind, but that’s too bad.

The RNLI is not there to get you home on time. 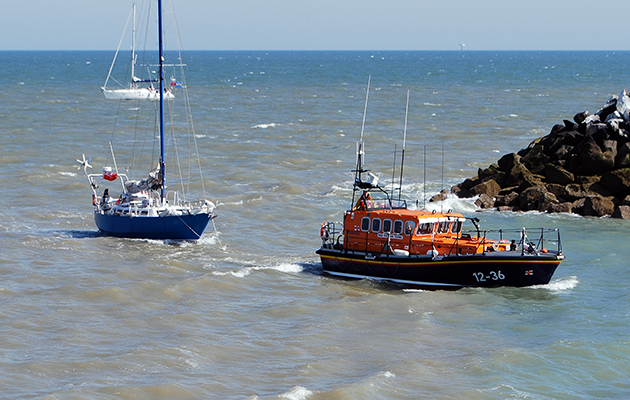 While the RNLI is there to help, could you sail yourself out of trouble instead? Credit: Bob Jeffery

This independence and attitude of ‘I’m going to sort this problem without help,’ is an important quality of yacht skippers and the further offshore you go the more important it becomes.

Fortunately modern yachts are comfortable, have reliable engines and electrical systems and modern electronic navigation instruments are easy to understand and simple to use.

This engine reliability is a relatively new development.

Only 40 years ago yacht engines were notoriously fickle and it was a considerable relief when, on entering port, they actually fired up.

Skippers therefore, out of necessity, had an anchor at the ready as they approached their destination and scratched their heads wondering how they might enter harbours under sail alone.

Now engine failure is less common, but the lifeboat statistics tell us that calling for help when it happens is still the solution favoured by many skippers.

Sailing instructors whose job it is to teach sailing in harbours and confined spaces are pretty good at these manoeuvres and practise them regularly.

For most recreational sailors spending time practising mooring pickups under sail is not a way to inspire the crew who want to get on with the passage and arrive somewhere.

In spite of this, it is worth making the effort to learn to manoeuvre without an engine.

Sailors who are adept at this usually sail more efficiently by being fully aware of the interaction between wind and tide and working with the boat, as well as being unfazed by engine failure.

The skill of manoeuvring is to be able to sail slowly while staying in control.

Sailing fast is great, but not when you are trying to come alongside.

Here are a few key factors to bear in mind:

The best point of sail for slowing down is a close reach. By allowing both sails to flap the yacht can be brought to a standstill, with some leeway if it’s windy, and can be easily accelerated by sheeting in.

This spill and fill technique will be familiar to trainee yacht skippers on RYA courses practising Man Overboard under sail.

Any attempt to slow down with the main up and the wind aft of the beam is doomed to failure.

All manoeuvres except MOB, whether under sail or power, must take into account the tidal stream. 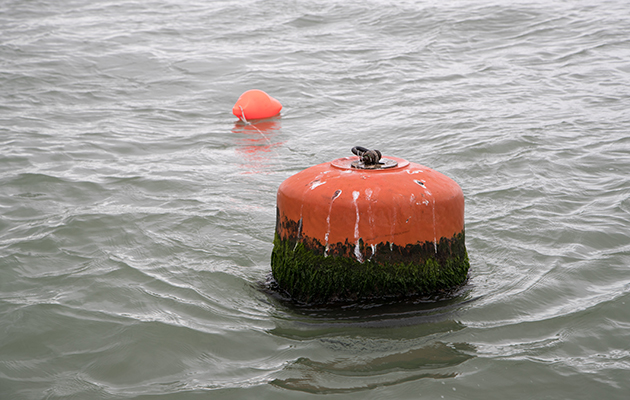 Check nearby posts or buoys to check the tidal stream.

If the wind is more than 90º to the tide, the wind is going to be aft of the beam on the approach, so the main has to be stowed and the yacht sailed under jib alone.

On most yachts the pivot point is near the forward edge of the keel.

The yacht is designed so that if both sails are set there is a slight tendency for the bow to come into the wind with the helm amidships. 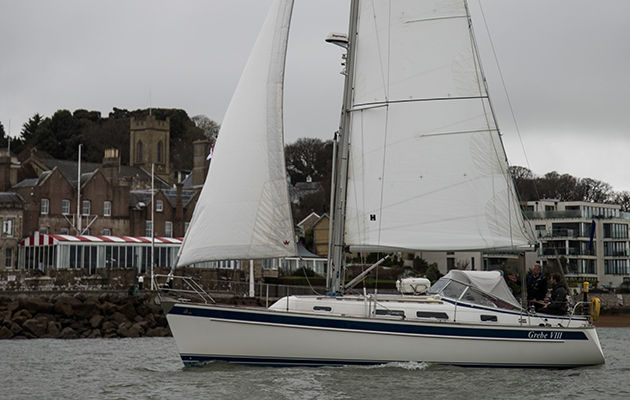 Entering confined water, it’s important to use your sail area to control steering as well as speed. Credit: Richard Langdon

This is weather helm. If the mainsheet is released and the jib kept sheeted in, the effort moves forward and the yacht bears away even with the rudder amidships, and vice versa with the main.

When manoeuvring at slow speeds it’s important to use the sails to help you steer.

Sailing in a confined space

If you have engine failure you are probably going to end up sailing into a harbour complete with fairways, traffic, moored yachts, navigation marks and other clutter.

To make life more difficult the wind direction and force will change regularly as you close the land.

The British Olympic Sailing team training in Sydney for the Games reckoned that whenever someone opened a window the wind shifted.

You’re not racing so you can afford to set a small or partially rolled jib plus main to give good visibility while still providing some drive, and it is also a way of pulling the bow round when you tack. 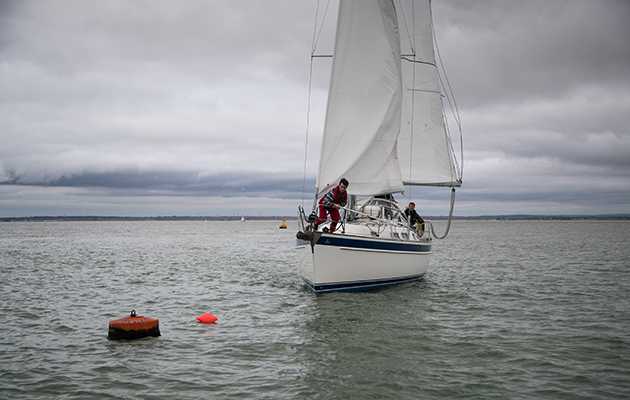 As this boat has slowed, leeway has increased, just visible on the water to windward. Credit: Richard Langdon

The secret is never get into a situation where you are stopped head to wind. If you have to slow down let the sails flap rather than pointing up.

You have to stay in control so that you can accelerate again. If you do get stuck head to wind (in irons), the only way out of it is to back the headsail, push the tiller to the opposite side, and wait for the boat to drift back.

Don’t forget leeway as you slow down; the keel will lose grip and slip sideways until you’ve accelerated again.

The possibility of passing close upwind and uptide of a moored yacht or other hazard should send a shiver down your spine, much like a lee shore, so avoid it at all costs, as the wind may let you down at the last minute by dropping or heading you.

It’s also important to ease the main when bearing away around the stern of moored yachts. 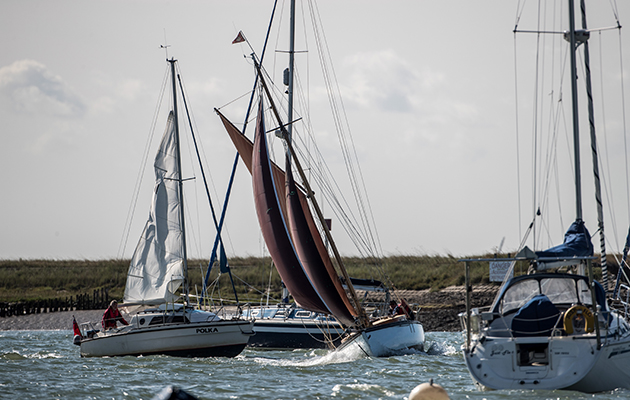 If you’re going to sail through moorings be aware of hazards to leeward, and the risk of broaching to windward. Credit: Richard Langdon

One gust and a broach to windward could result in a large insurance claim.

Inland sailors tacking up rivers accelerate into the tack near the river bank.

Too slow and you can end up head to wind in irons with the possibility of falling back on the original tack straight into the bank.

Pilotage is hard enough under power but even more challenging under sail even if you’ve done as much preparation as possible.

Remember you can always slow down but you’ll also have to think of several things at once and give quick instructions to your crew.

The post Manoeuvre under sail: getting home without an engine appeared first on Yachting Monthly.