Passages to and from the eastern Mediterranean are significant undertakings which are usually made as extended cruises taking in the Mediterranean islands.

This may change for British and other non-EU sailors, who have outstayed their welcome in the Schengen zone and have limited time to return. This turns these long passages into more of a delivery, giving long hops rather than overnighters.

Weather-wise the Mediterranean is an interesting area being a large body of water of moderate temperature, surrounded by mountains and, in the south, desert. This creates large temperature contrasts between the water and land which generates some localised winds and conditions.

A map of the Mediterranean is dotted with locally-named winds which are well recognised meteorologically. Most of us are familiar with the Mistral, the Meltemi, the Bora, and the Levanter and Vendaval through the straits of Gibraltar.

These Mediterranean winds are significant, and generated by a mixture of heat, mountains, and the synoptic situation. Sailing in the Mediterranean is sometimes described as being a mixture of calms and gales; though this is a bit too extreme as we can also enjoy fantastic sailing driven by light to moderate sea breezes. 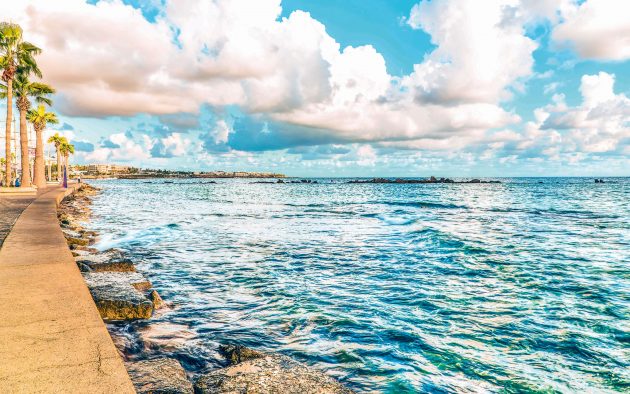 It would take a large book to cover Mediterranean weather patterns and local winds; so we will cover some of the principles to watch for on passage from the east to Gibraltar.

The western part of the Mediterranean tends to be influenced by what is happening in the Atlantic and where the Azores high is, while the further east we travel the greater the influence of the land.

To the north, central European weather influences the winds – particularly the Mistral and Bora (while we think of them as local winds the Mistral can extend to Africa).

When setting the Marseille to Carthage record on the maxi cat Playstation, we carried the Mistral all the way – lunch in France and a late breakfast in Tunis! 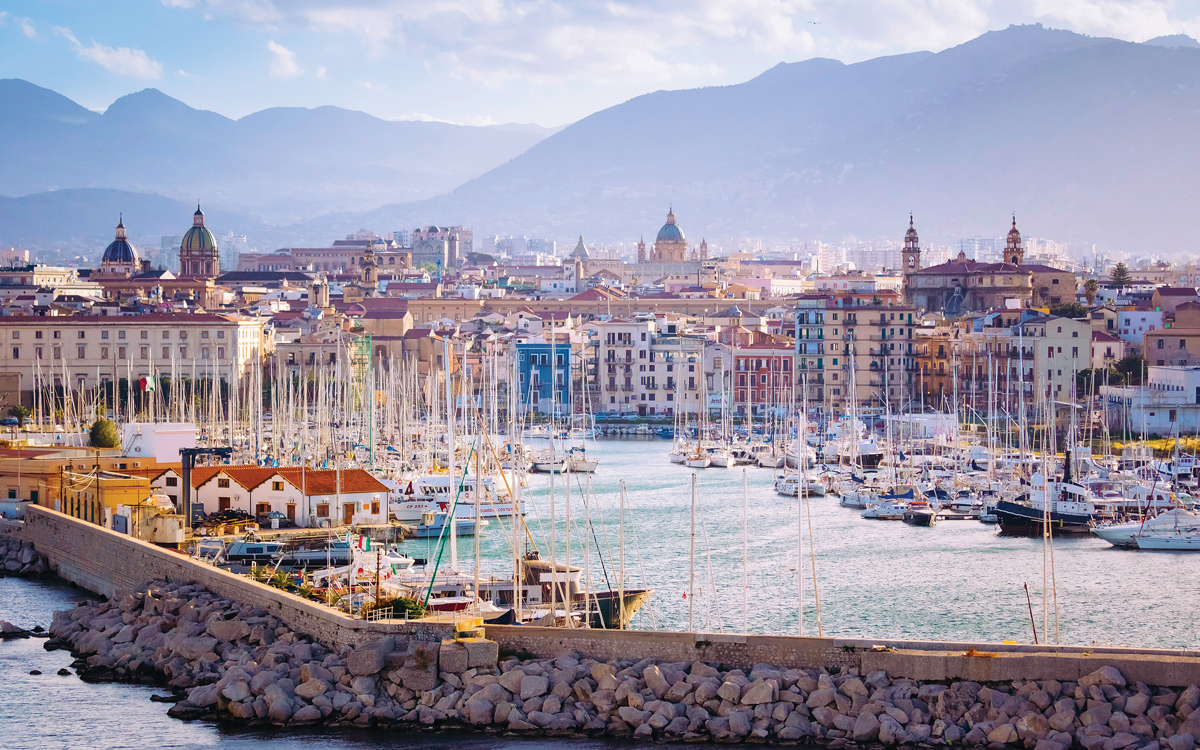 With plenty of airports located along the most common cruising routes and cheap flights within Europe, keeping a yacht in…

Check out this photo of a rainspout in the Med

A passage from Greece or Turkey to Gibraltar and the exit from the Mediterranean is generally done towards the end of the season. Currently the Corinth Canal is closed by landslides which limits departure options from the Aegean to passing between Cape Maleas and Crete.

Due to the heat low often found over Turkey and south-western Asia, northerly winds are typical of the Aegean summer and the Meltemi will often reach gale force where it is funnelled between islands.

The wind is strongest during the afternoons at the time of maximum temperatures and tends to be concentrated through the central part of the Aegean. Although the Meltemi is weakening by late summer, strong northerlies can last through to October when we start to get an increasing number of southerlies.

Leaving the area is therefore generally reasonably easy with northerly winds and occasional southerlies. Between Greece and Crete the wind will funnel strongly. 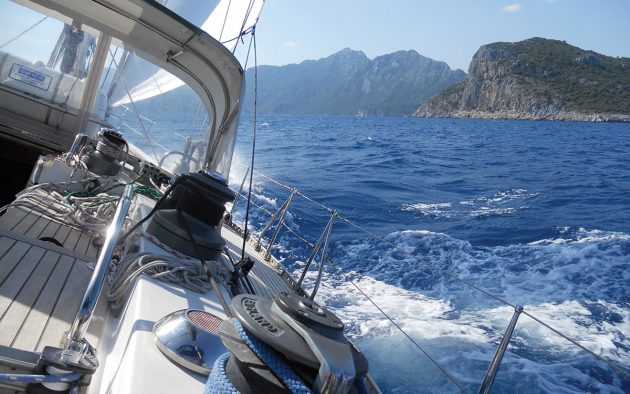 A Swan 441 on passage in the Mediterranean

Moving further west into the Ionian Sea, we enter a weather crossroads. The Ionian is influenced by northerlies in the east, but as we get further west the passage of any North African lows has a greater effect on the wind. We will also feel the effects of lows that are generated in the Gulf of Genoa.

The Gulf of Genoa is one of the most prolific areas in the world for producing lows. Once formed these lows tend to track south-east through the Tyrrhenian Sea or cross Italy into the Adriatic. Their passing will give cyclonic weather conditions with changing wind directions and the transition from summer to winter conditions can be abrupt.

The Gregale is the wind to particularly watch out for as this can be a strong north-easterly wind reaching gale force. High pressure to the north and low to the south will generate a tight pressure gradient bringing strong to gale force winds along with low cloud and rain.

Statistically, while a north-westerly wind is most likely through the summer, by October the winds are fairly evenly distributed from all directions.

Most yachts pass through the Straits of Messina to enjoy the hospitality of Sicily and the ports along the northern coast. If on passage and not intending to stop it is a shorter route to pass south of Sicily.

The Straits of Sicily is relatively shallow with land on both sides, and the wind gets funnelled. These winds are strongest and most often from north-west and south-east. This funnelling usually makes the last couple of days of the Middle Sea Race either exciting running conditions, or a tough beat to windward.

Between Sicily and Africa the most likely direction is from the north-west, though this can reverse with low pressure over North Africa. 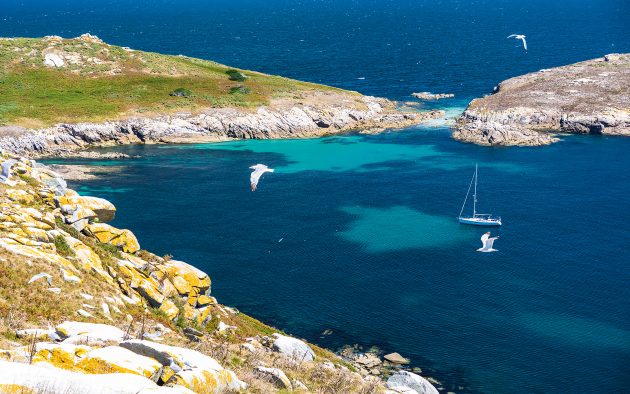 The north coast of Africa is little visited by yachts. While I have cruised in Tunisia, there is little to recommend anywhere else on the North African coast with ports of refuge few and far apart. What ports there are, are commercial with few yacht facilities.

Most yachts therefore do this part of the passage in one hit – a passage of some 750-800 miles. The pattern to the winds along the coast depends on the season and during the winter months we are most likely to see westerly winds. As North Africa heats up and the pressure lowers, we see an increase in easterly winds.

The predominance of easterly winds continues from May or June through to October when the wind direction becomes more evenly distributed, before becoming more westerly through the winter. This is also reflected through the Straits of Gibraltar where we see an increase in periods of westerly winds as we get into autumn.

The straits are a great example of a gap wind, where the wind is strongly funnelled between the mountains of Africa and Spain. The wind will be strong westerly or easterly with little chance of any other direction in the straits. Whatever the wind strength on the approach, it will strengthen in the straits. This stronger wind will exit the straits as a jet and, while there may be some fanning out in direction, the strong band of wind will extend many miles downwind.