Iain Percy, Ben Ainslie and Giles Scott. These three British sailors have now between them taken every gold medal in the Olympic Sailing Finn fleet at every Olympic Games since 2000 as Giles Scott claimed his second straight gold medal in Tokyo 2020 in an incredibly tense final medal race.

Giles Scott started the week with a disappointing couple of results by his standards, picking up two ninth places, giving himself a lot to do for the remainder of the Olympic Sailing regatta.

However, since that first day, the Brit has been in imperious form and went into the final Medal Race with a clear advantage over second placed, Zsombor Berecz of Hungary.

What appeared to be an uncharacteristic mistake out of the start saw Scott needing to return having been over the startline early and dropping him to the back of the fleet. In fact he later discovered that he had been all clear after all, and never needed to go back. “I went back to restart because I thought I might be over the line too early and I wasn’t sure. It was the one thing I told myself I couldn’t afford to do, but somehow that’s what I end up doing. But I think that’s what the occasion that does to you,” the Brit explained later.

With both Berecz (HUN) and Spain’s Joan Cardona having good first beats, the pair rounded the first mark to leave them in Gold and Silver respectively.

There was not enough breeze on the course for the unlimited pumping rule to be in place, so the downwind legs were all about sailing smooth and fast – not the usual high effort athletic sailing we are used to seeing in the Finn where power and fitness are the keys to victory. 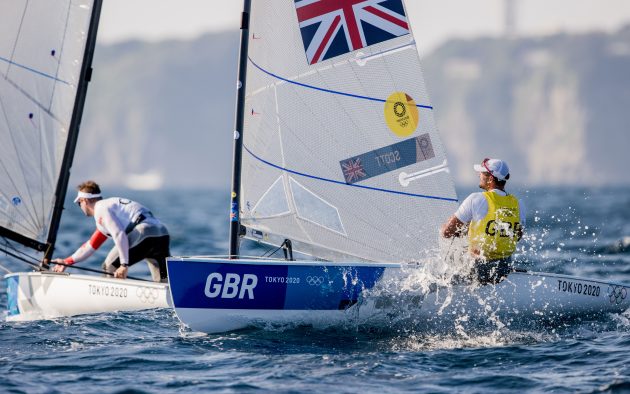 Towards the bottom of the downwind leg, Scott was overtaken by three boats dropping back to seventh, 1 point out of gold as Berecz maintained second in the race behind Jake Lilley (AUS).

Up the next leg the points were going back and forth between Giles Scott and Berecz. Then down the final leg Nicholas Heiner (NED) broke into the lead past Hungary. The pack was reshuffling by the second and it looked as though the medals would all come down to the final leeward mark rounding and short reach to the finish.

Zsombor Berecz just got inside Heiner on the last mark rounding and set off on the short reach to the finish with the gold medal in his grasp. He crossed the line in first but somehow Scott managed to haul himself past Turkey and Spain in the dying moments of the race to claim gold by 2 seconds.

Today is the last time we will see the Finn in the Olympic Sailing competition with the class having been dropped for Paris 2024. The class is sailed by the heaviest sailors in Olympic competition so for many this will be their last chance to secure a medal.

It has been a class that has been home to some of the sports biggest names on the Olympic stage. Russel Coutts, Paul Elvstrøm, John Bertrand the list of huge names goes on. So it is a fond farewell the class and for the Brits, the loss will be keenly felt having delivered six gold medals since lottery funding helped the British Sailing Team to a position of dominance in the sport of sailing broadly and the Finn in particular.