The Brits beat favourites New Zealand in the 49er Olympic Sailing regatta, while Martine Grael and Kahena Kunze make it two in a row in the 49erFX

The Men’s and Women’s Olympic Skiff fleets saw some tense racing for their Tokyo 2020 Olympic Sailing medal races, with the Brits clinching a 49er gold for the men and Brazil’s Martine Grael and Kahena Kunze grabbing their second gold in the women’s 49erFX after a home win for the pair in Rio 2016.

Most Olympic sailing observers would have been expecting a win for New Zealand today as the form pair in the fleet, Pete Burling and Blair Tuke went into the final medal race with a slim advantage over the British pair of Dylan Fletcher and Stu Bithell.

Burling and Tuke have been the dominant force in the 49er fleet since 2013. They picked up a silver in 2012 but went through the cycle up to 2016 without being beaten in any significant competition. They won gold in Rio by a healthy margin and have since become household names in the sport, both being key members of the New Zealand America’s Cup team winning two America’s Cups for their country.

However, as with Giles Scott, the Kiwis have had a tough run in to these Olympics with the last America’s Cup finishing at the start of this year seriously disrupting and already very disrupted Olympic cycle.

The medal race was a nail-bitting affair with the top three teams of Fletcher and Bithell, Burling and Tuke and Germany’s Erik Heil and Thomas Ploessel all fighting for the top three positions in the race and overall.

Around the final windward mark, Germany rounded narrowly ahead of the Brits, with the Kiwis in third. As things stood, Burling and Tuke would win by 2 points, but if the Brits could get one boat between themselves and the Kiwis they could clinch gold.

Germany gybed away halfway down the final run, while Fletcher and Bithell continued, holding out for better breeze on their side of the course.

It was a tense final few moments as the Brits came in towards the finish on Port while the Germans were rolling in on starboard. In a photo finish Great Britain gybed across the line crossed the finish in first place, mere centimetres ahead of the fast-closing Germans. New Zealand crossed the line third. Just enough for the Brits to take Gold medal. 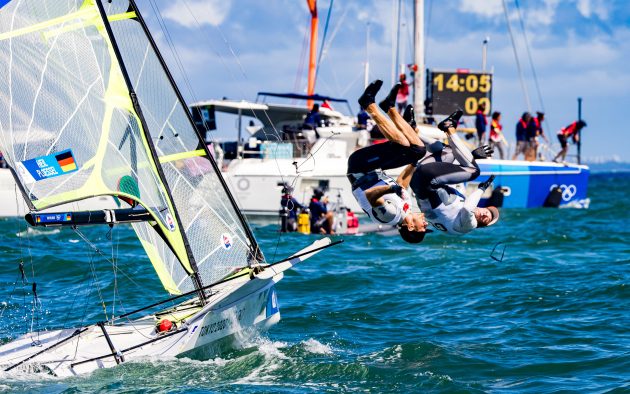 For their part, Burling and Tuke become the first sailors ever to have won Olympic medals and the America’s Cup in the same year.

Brazilian pairing, Martine Grael and Kahena Kunze have won their second consecutive gold medal in the Women’s Olympic Skiff, the 49erFX. The pair won in 2016 in an emotionally charged home win in Rio.

Grael, comes from a true sailing dynasty and looks set to follow in the footsteps of her father, Torben Grael who is one of the most well known and decorated Brazilian sailors with five Olympic medals. Martine’s uncle, Lars Grael, is also an Olympic medal winner.

Brazil were struggling for a lane out of the start but found a gap at the committee boat in the last 10 seconds and tacked out to the right on a lonely path while the other nine boats carried on towards the left. 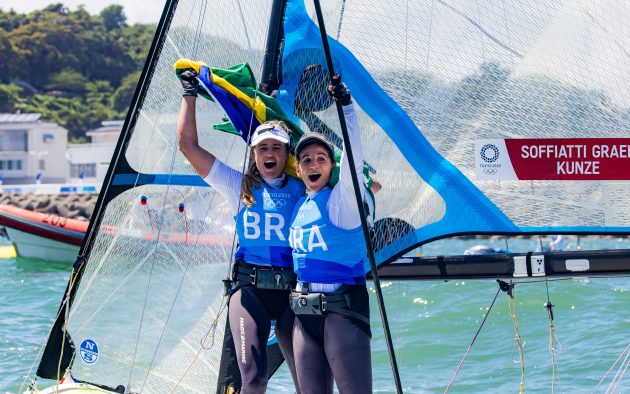 First around the first mark was Argentina, Norway in second with Brazil in third and the Netherlands in fifth – advantage Brazil.

On the first downwind leg, the Netherlands were fighting with Germany and Spain for the silver and bronze but Annemiek Bekkering and Annette Duetz (NED) got stuck on the outside of a slow mark rounding at the leeward gate, held up the French team. The Dutch were now at the back, in 10th and out of the medals.

However up the final windward leg the Dutch pulled back two critical places, enough to get them ahead of Tamara Echegoyen and Paula Barcelo (ESP) for the bronze medal.

Victoria Travasco and Maria Sol (ARG) won the Medal Race by a long distance from Norway. But a third across the finish was sufficient for Brazil to win the gold medal.

The post Olympic Sailing: Gold for Brits and Brazilians in 49er and 49erFX appeared first on Yachting World.