It was a light day on the water for the sixth day of the Tokyo 2020 Olympic Sailing Competition, which saw new competitors at the front

Medal Races where first brought into the Olympic Sailing Competition in an attempt to provide a final race showdown for the medals, while maintaining the integrity of the sailing competition. Thus the top ten sailors from each class go through to a double points medal race theoretically to try to settle their positions.

However, so far this regatta we have now seen two sailors wrap up their competition ahead of the medal race. Yesterday Kiran Badloe of Netherlands finished his Men’s RS:X Windsurfer regatta only needing to complete the Medal Race on Saturday to secure gold.

Today, Australia’s Matt Wearn has wrapped up the gold medal in the Men’s One Person Dinghy – Laser at the Tokyo 2020 Olympic Sailing Competition, making him the third consecutive Australian to have achieved the feat. All of which has happened ahead of his medal race on Sunday. 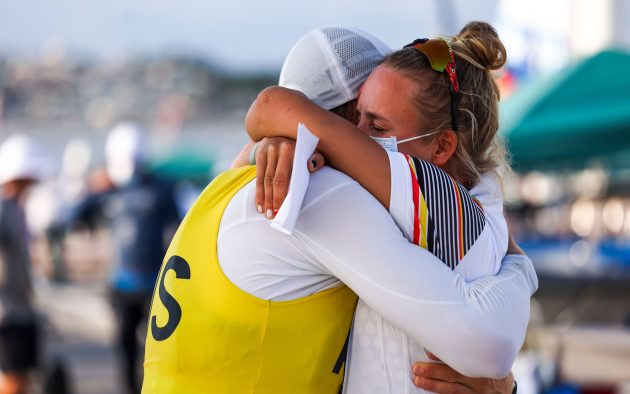 Wearn’s achievement is all the more remarkable given the Aussie had a (by his high standards) disappointing opening day in Enoshima, where the Tokyo 2020 Olympic sailing competition is taking place.

Elsewhere, Denmarks’ Anne-Marie Rindom could have wrapped up a gold medal in the Women’s One Person Dinghy – Laser Radial, but for a big misunderstanding.

The big story overnight from the Olympic regatta has been that of a number of crews picking up disqualification for a measurement infringement. 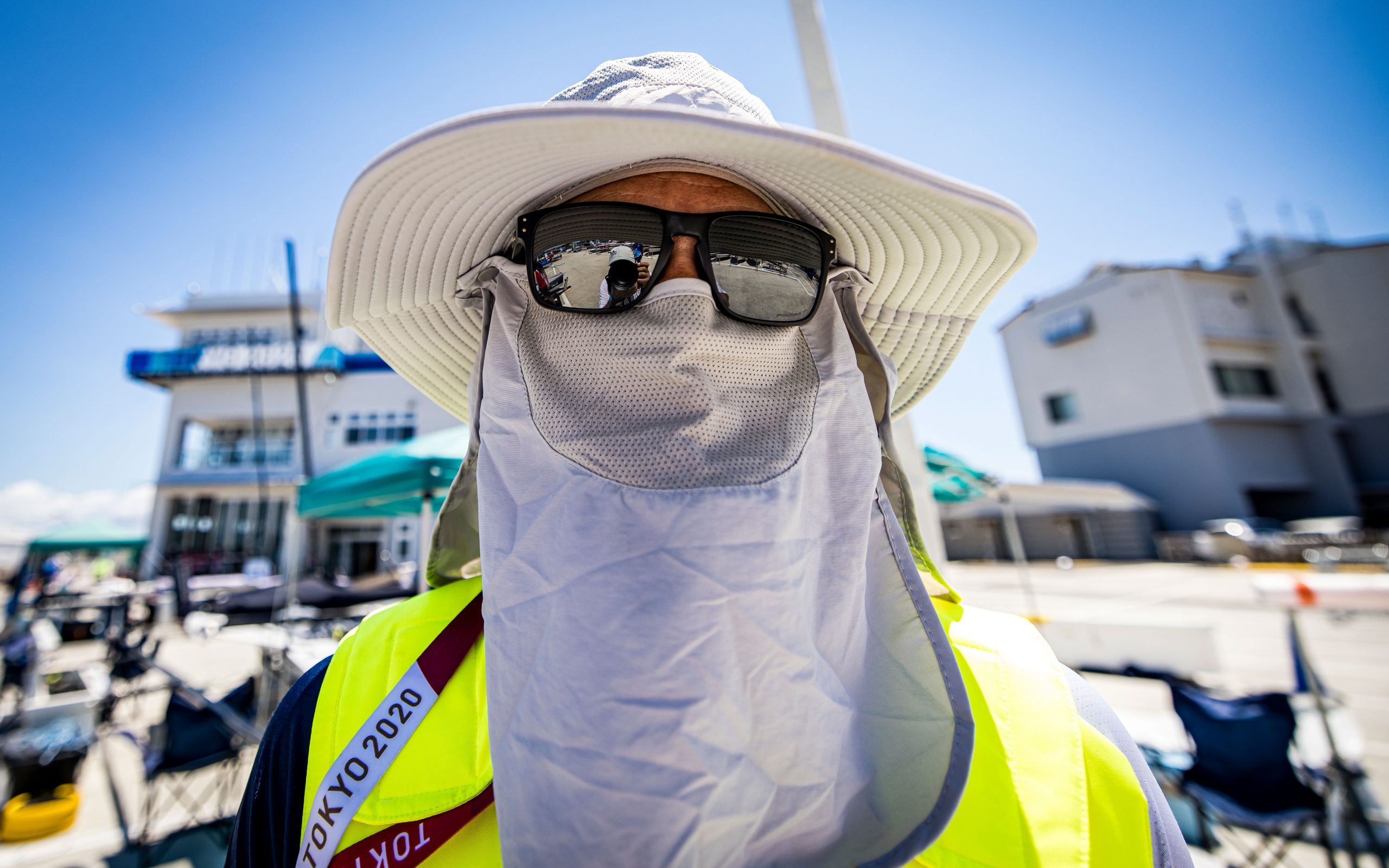 Touch wood, this Olympic Sailing Regatta really seems to be working out! The site of the 1964 Games is delivering… 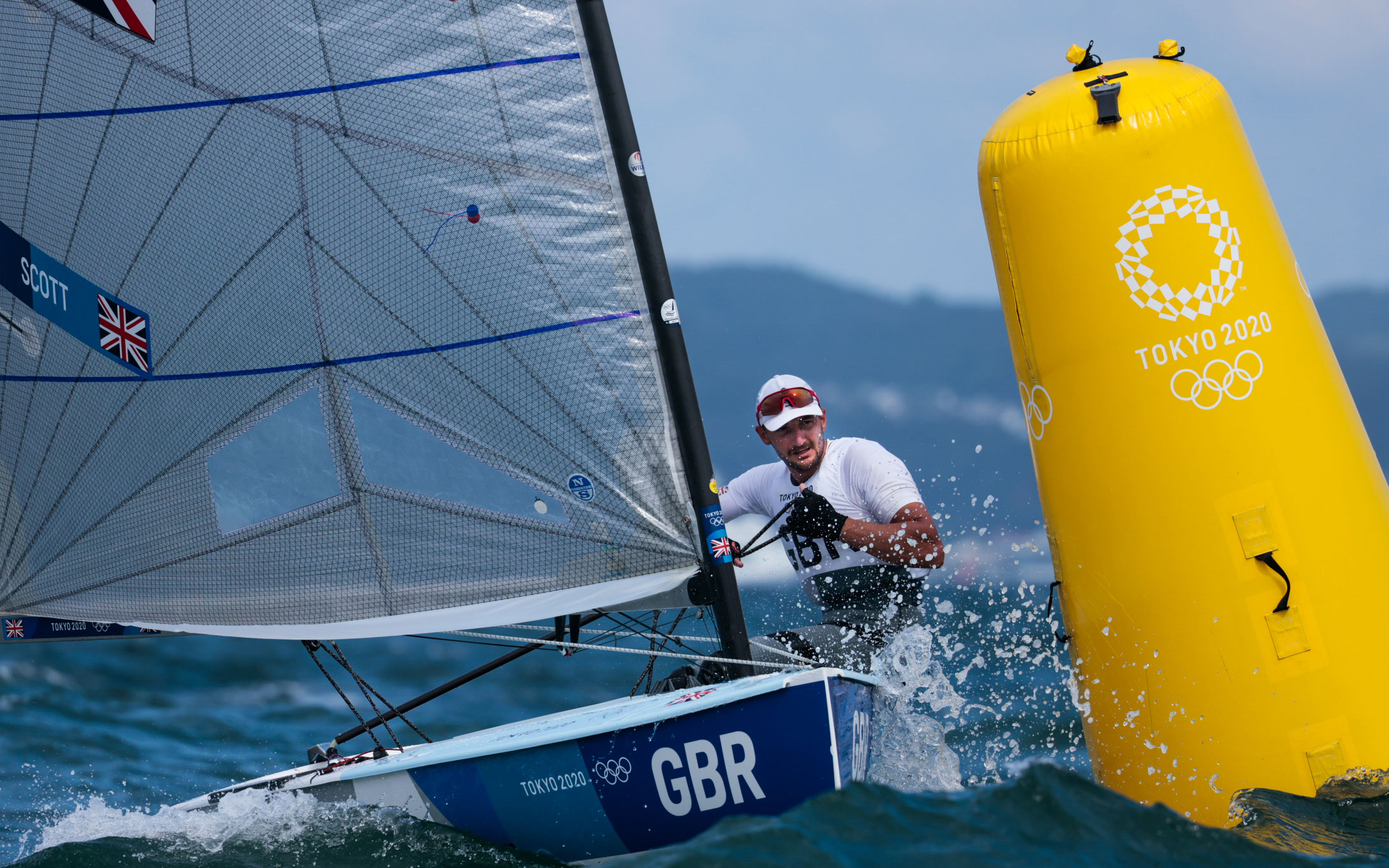 After coming off the water, boats and equipment are weighed by the measurers. In a protest hearing Thursday it was found that both the Brazilian and Irish 49er teams were measured with trapeze harnesses that were over the allowable weight limit of 2kg (when wet) by 30g and 9g respectively.

The result of the hearing means that both teams pick up a disqualification for the days racing, meaning Ireland’s Robert Dickson and Sean Waddilove who were sitting in seventh overall dropped down to 13th overall, while Brazil’s Marco Grael and Gabriel Borges moved from 9th to 16th overall. 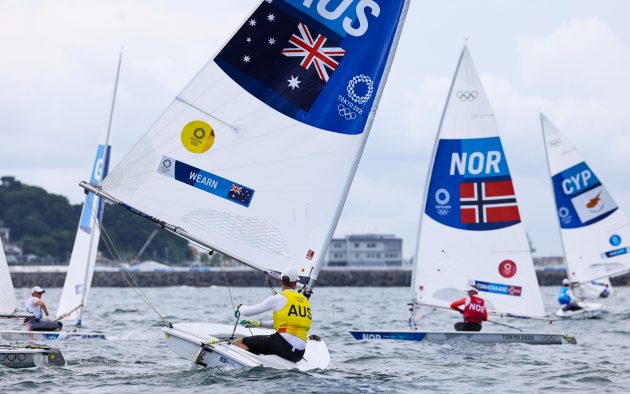 Even light and fluky winds couldn’t hold up the relentless march of Matt Wearn who secured the gold medal for Australia this afternoon. With a 22-point advantage, Sunday’s Medal Race will be a formality for the jubilant Australian, who was met by his girlfriend still in contention for a Laser Radial medal, Emma Plasschaert from Belgium.

“It’s an amazing feeling, and thanks to a great training group that we’ve had back in Australia for a while now,” said Wearn. “It probably won’t be until I’ve had a bit of solitude in my room that it will all hit me, all the emotions.

“After the start of the week there was a little bit of doubt I’d be able to get back to here. I put myself in a pretty big deficit. These guys out here are amazing sailors and they’re not going to relinquish a lead if they’ve got one. So I knew I had to fight. And yeah, that’s what we did.”

After leading for much of the week, Pavlos Kontides’ ability to climb back from bad situations eluded him in the final race this afternoon. Instead, one poor downwind run – which plummeted the Cypriot from seventh to 23rd – dropped him out of the medals but not out of contention.

The points are very close between Hermann Tomasgaard of Norway in second, Tonci Stipanovic (CRO) in third, and Kontides now in fourth. Germany’s Philipp Buhl and Brazilian legend Robert Scheidt still have an outside shot at the podium. 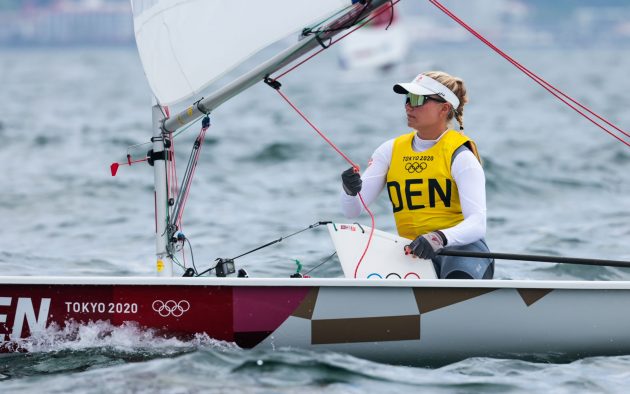 If Anne-Marie Rindom (DEN) doesn’t win gold after Sunday’s Medal Race, the mistakes of today will haunt her for the rest of her life.

Much lighter wind conditions make for a lot more jeopardy in the Laser Radial. Not only is the wind hard to read when it’s in short supply, but the risk of being penalised for propelling the boat forward illegally through excessive body movement, fanning the sails or wagging the tiller to promote forward motion increases.

The result can be a yellow flag from the on-water-jury. A first offence is a 720-degree penalty turn during the race and a second offence requires the sailor to retire from the race.

Rindom explained the nightmare scenario for her in the final race of the Laser Radial Opening Series, “I got a yellow flag in the first one for pumping up the downwind and then in the second start, I got the second yellow flag, which means that you have to retire from the race. And so I did.

“But then there was a general recall so there was a new start. I didn’t have enough time to talk to my coach if I could start or not. I simply didn’t know the rule that I could start in that race. I decided to start but then I decided to retire because I wasn’t sure and I didn’t want to get a DNE [non-discardable disqualification].

“Obviously that was wrong and I can only blame myself. I guess I should have known the rule. But I’ve never been in this situation in my whole career.”

For all that, Rindom still holds a seven-point advantage over arch-rival Marit Bouwmeester going into Sunday’s Medal Race. But today could have been the day that the Dane had put a padlock on the gold medal.

“I’m just devastated right now, it’s hard to be in my own body with so many emotions. But yeah, I just have to rise again and be ready for Sunday because nothing is over yet.”

Yesterday Bouwmeester’s hopes of the gold medal looked dead and buried, but Rindom’s pain is the defending Olympic Champion’s opportunity. It’s a huge momentum swing in favour of the Netherlands.

This is not as simple as a two-horse race, however. Josefin Olsson holds bronze medal position and the Swede, along with Canada, Belgium, Italy and Finland all have a shot at the podium this Sunday. 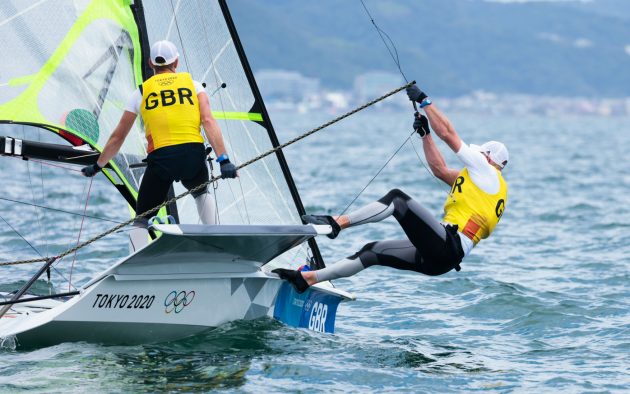 Britain’s Dylan Fletcher and Stu Bithell hung onto their lead in the 49er class in the very light winds of day six in Tokyo. Photo: Sailing Energy / World Sailing

It’s neck and neck at the top of the Men’s Skiff – 49er with Great Britain still holding the golden spot but now with New Zealand level on the same points. Just one point behind the leaders is Spain, with Denmark four points further back in fourth overall.

Pete Burling and Blair Tuke (NZL) had the most consistent day in a minefield of a race course, the only team to keep all their scores inside the top six.

“We always knew it was going to be a challenging day for us in those kind of conditions,” said Tuke. “To come back with three low ones is pretty pleasing. It was a heck of a fight.” 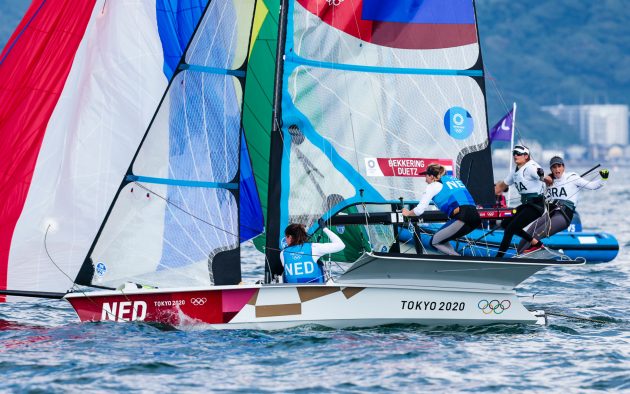 Annemiek Bekkering and Annette Duetz have now moved into the lead in the 49erFX. Photo: Sailing Energy / World Sailing

Charlotte Dobson and Saskia Tidey (GBR) took a tumble down the leaderboard from first to fourth place, although their points advantage from the windier days still has them well in touch with the front three.

Taking charge for the first time this week are double World Champions Annemiek Bekkering and Annette Duetz (NED), who hold top spot by just a point from the reigning World Champions from Spain, Tamara Echegoyen and Paula Barcelo.

The reigning Olympic Champions Martine Grael and Kahena Kunze (BRA) moved into the top three for the first time this week.

Bekkering was pleased with their boat speed and tactics, commenting, “We got good starts, the boat was going fast and we managed to find some good lanes in the tricky breeze. It’s a different style of sailing from what we have done the last days in the big wind, and I think we adapted well.” 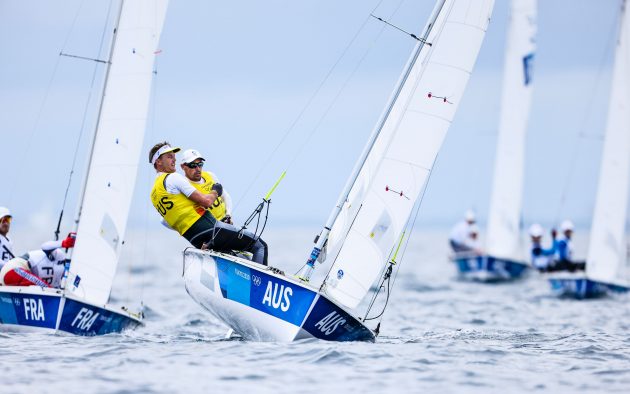 Even in today’s patchy, unreadable breeze Mat Belcher and Will Ryan (AUS) succeeded in stretching further ahead of their rivals in the Men’s Two Person Dinghy – 470 fleet. Scores of 4,3 extend the Australian advantage to 11 points ahead of Luke Patience and Chris Grube (GBR) who continue to hold second place.

A good outing for Paul Snow-Hansen and Dan Willcox moves the New Zealanders into the bronze medal position.

Belcher looks so relaxed, as well he could be the way the double Olympic medallist is sailing. “We feel like we’ve got a really good rhythm and we’re out there having fun, just trying to keep that momentum going as long as we can.” 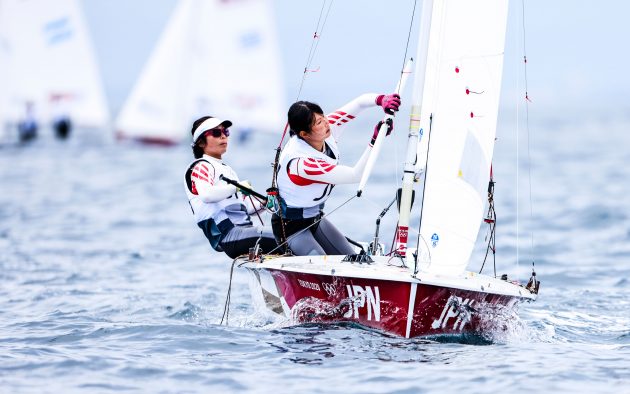 The lighter breeze brought out the best from local heroes Ai Kondo and Miho Yoshioka (JPN) who scored two second places in the 470 Women. It moves the Japanese up to fourth overall and makes them the likeliest bet for an Olympic medal for the host nation.

Given the choice of the physical stress of pushing her body to the max in the stronger conditions of the previous days, or the mental torture of a lighter day like today, McIntyre says there’s no contest, “Today you feel like you have so little control, it could go either way on some of those beats. It’s much easier when you can apply some physicality to the boat and really help make the boat go faster in stronger winds. It’s a big change of mentality from one condition to another.”

Currently able to discard their 13th place from the earlier race of the day, a race win for Agnieszka Skrzypulec and Jolanta Ogar (POL) keeps the Polish in the lead with a four-point buffer to the British.

The top ten in the Men’s and Women’s Windsurfer – RS:X will enjoy a day of rest on Friday ahead of their Medal Races on Saturday 31 July.