After two weeks of training in steady onshore breezes, it was all change for the opening day of the Tokyo 2020 Olympic Sailing.

On the Enoshima course, close to the sailing centre, the Men’s and Women’s RS:X Windsurfers opened with three races in a light and fluky east north easterly breeze blowing from the shore.

The light air specialists were making their weight advantage pay, requiring the pre-regatta favourites to work extremely hard to stay in touch with the front of the fleet.

It was even tougher over on the Kamakura course where the Laser Radial Women’s One Person Dinghy completed two stressful races that yielded two unexpected winners, followed by just one race for the Laser Men’s One Person Dinghy. Here the winner’s gun went to one of the event favourites while a number of other podium potentials were floundering further back in the pack. 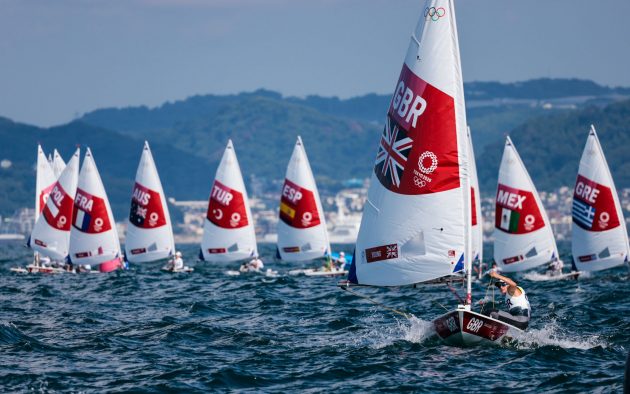 The opening day of the women’s one person dinghy, Laser Radial competition was full of surprises. The Kamakura course proved brutally tricky to read in the light, offshore winds, and some big names took a tumble today while some lesser known lights rose to the occasion.

Few would have predicted that Germany’s Svenja Weger would emerge from the melée in first overall, following a solid fifth place in her opening race with a runaway victory in the next. Asked for the secret to her consistency, Weger said, “My coach gave me some really, really good information. I chose to go to the left side which was favoured a lot and which helped me have a good race. And then the second race, I don’t know… I just started in the middle and played it from there.”

The German couldn’t hide her excitement. “It’s amazing. It’s amazing. I don’t know what to say about it. Like, I was almost crying when I was crossing the finish line, but it’s a great feeling. I couldn’t have imagined that the regatta would start like this for me.”

Much more expected is that Anne-Marie Rindom sits in second overall after finishing sixth and fifth, and the Dane must be counting her lucky stars that she didn’t suffer the fate of other medal favourites. “I’m happy about my performance. It was a solid day. I made a great comeback in the second one, which I’m very proud of. It’s not easy at the Games. There’s a lot of nerves.”

Rindom was the bronze medallist from Rio 2016. Marit Bouwmeester, the reigning Olympic Champion from the Netherlands, opened her day with scores of 21,14, which leaves her in 18th overall. Five places further back in the standings is the Olympic silver medallist from Rio, Annalise Murphy (IRL).

While some of the established names struggled with the unpredictable conditions, others seized the opportunity. Two points behind Rindom in third overall is Elena Vorobeva (CRO) who was vying for the front of the first race before being given a penalty for too much kinetics downwind. She came 11th in that heat and then followed with second place in the next.

Cristina Pujol (ESP) had the most thrilling of starts to her first Olympic Games. “I scored a first in my first race at the Olympic Games! I couldn’t believe it! I’m very, very happy!”

On the other hand, spare a thought for Paige Railey of the USA who has been campaigning hard in the Laser Radial since 2005. Now at her third Olympic Games and widely considered a serious contender for the podium, she crossed the finish line of race one in 40th, and was disqualified in the next for starting too early. “It’s a rough day for me,” said the 34-year-old. “Now I just need to take one race at a time and just do as good as I can.” 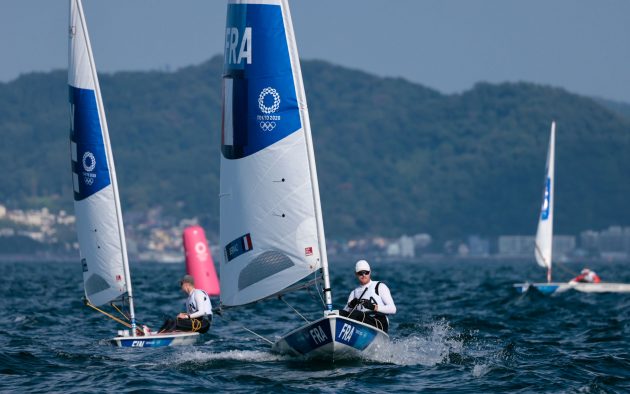 Only one race was completed on the opening day of the Men’s one person dinghy, Laser Olympic sailing fleet today, and line honours went to Jean-Baptiste Bernaz of France.

“It’s always nice to start well, but it’s the very beginning. The conditions were really freaky but when you are leading the race, it’s always easier.” The Frenchman finished just ahead of Kaarle Tapper of Finland, and then a long gap back to the pack, headed by Norway’s Hermann Tomasgaard.

There were plenty of ups and downs, and one of the biggest gainers during the race was the London 2012 silver medallist from Cyprus, Pavlos Kontides, who climbed from 27th at the first mark to fourth by the finish. His good friend and training partner, the Olympic sailing Rio 2016 silver medallist from Croatia, Tonci Stipanovic, had a sniff of a top 10 finish but had to settle for 15th. “It was a crazy day up and down, but I hope tomorrow we will have some better conditions,” commented the Croatian.

Two places behind Stipanovic was another medal favourite, Australia’s Matt Wearn, two places ahead of New Zealand’s Sam Meech, the bronze medallist from Rio. It’s going to be that kind of regatta. Not for the faint hearted. 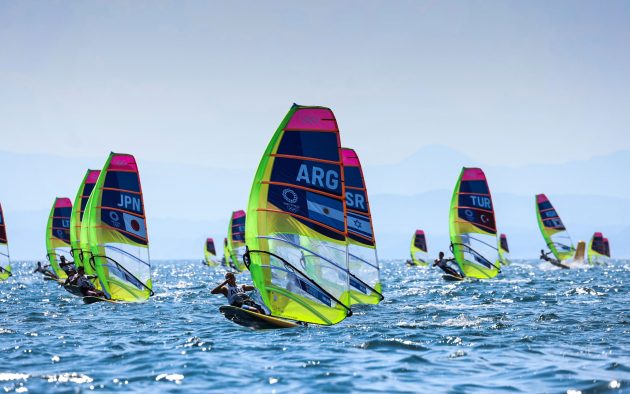 Mateo Sanz Lanz (SUI) couldn’t have hoped for a better opening day to his Olympic sailing regatta. The Swiss sailor bulleted out to the right-hand side of the course in race one and led from start to finish. Spain’s Angel Granda-Roque sailed a clean race to finish in second place. Incredibly the next race was almost a carbon copy, Lanz executing the same port tack start and earning the same reward of a second bullet at the finish. This time it was Italy’s Mattia Camboni who crossed the line behind the Swiss athlete, with Granda-Roque holding third.

While the Swiss, Spanish and Italian sailors really love the light winds, it was up to the taller, heavier athletes to hang in during the light air conditions. Pre-event favourite Kiran Badloe has shaved his hair and coloured into a blue arrow, to help harness the elemental powers of his cartoon hero, Avatar: The Last Airbender. The blue arrow came good on the final heat of the afternoon, the Dutch three-time World Champion taking the winner’s gun.

In the first race, Lanz won from second-placed Granda-Roque by exactly 100 seconds, a stunning margin of victory. “I am very, very happy,” said the Swiss sailor. “This is a start to the Olympic Games that any sailor would like to have. It’s a dream come true.”

Granda-Roque was just as thrilled with his opening day. “I’m quite happy, this being my first Olympic Games! I managed to get a second and a third, and in the last race it was a bit more complicated,” said the Spaniard who was 13th in the windier race. “With not much wind I usually go pretty well.”

With the discard kicking in already after just three races, Lanz leads with a perfect two points ahead of Granda-Roque on five. Badloe and Camboni are on six points, although the Italian is the most consistent, counting all results so far, his scores of 4,2,4 perhaps the most desirable set of results from day one. 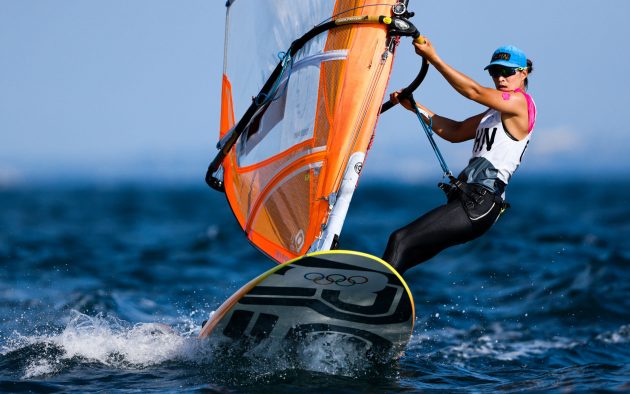 Five years ago, Charline Picon (FRA) had a stunning start to her Olympic sailing campaign for Rio 2016, winning day one and going on to win the Olympic gold medal. So is it a good omen that her opening scores of 1,6,2 have put the defending Olympic Champion in the lead at the start of Tokyo 2020? The rest of the field will be hoping not!

In second place is another veteran of the Games, Zofia Noceti-Klepacka (POL), although her scores of 4,1,14 are not as consistent as the next three in the overall standings who have kept all their scores inside the top 10 – Marta Maggetti (ITA), Emma Wilson (GBR) and Katy Spychakov (ISR).

Wilson was pleased to have got day one behind her. “I’m not nervous anymore, but I was nervous before racing. Now I’m looking forward to coming back tomorrow.”

If Wilson and others found the last race to be the toughest, it also proved to be the saving grace for the pre-event favourite, three-time World Champion Lilian de Geus (NED). An 8,11 score from the first two heats was not what she had planned for. Winning the last was some kind of relief and redemption. “I needed this one. Good decisions and a technical race. Really happy that I could cross the line first. I had hoped to have a better day, but we have a long week ahead.”

The Laser, Laser Radial and Men’s and Women’s RS:X continue racing on Monday 26 July at 12:00 JST.

Tuesday 27 July will see the next wave of sailors take to the water with the start of the Men’s Heavyweight One Person Dinghy – Finn, Men’s Skiff – 49er and Women’s Skiff – 49erFX.

The post Olympic sailing: Struggles for the big names on day one appeared first on Yachting World.