Twenty years after the death of her father Sir Peter Blake, Sarah-Jane Blake reflects on his legacy and the influence he has had on her life

Twenty years after the death of Sir Peter Blake, Sarah-Jane Blake talks to Alex Stone about her father’s legacy and the influence he has had on her life

So goes the proverb in te reo Māori, the indigenous language of New Zealand.

The saying was was composed by Sir Pou Temara; his rendering of it is: ‘A low hill only allows limited vision. A high mountain gives distant vision.’

This aligns with a widespread Māori belief that we go into the future on the shoulders of others – the giants, our tūpuna, our ancestors. 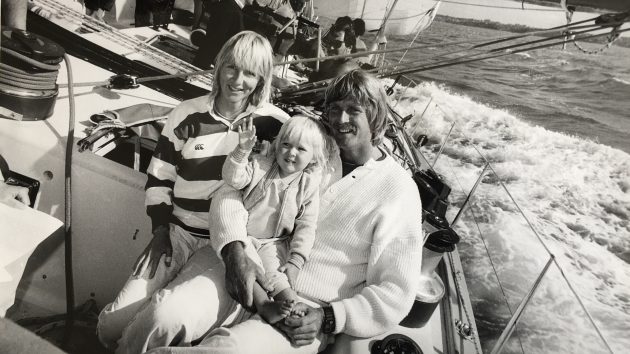 Sarah-Jane with her parents Sir Peter Blake and Lady Pippa Blake. She was part of the crew during Lion’s delivery trip from New Zealand to the UK for the 1985-86 Whitbread. Credit: Sarah-Jane Blake

It certainly applies to the artist Sarah-Jane Blake, the creative, visionary daughter of Sir Peter Blake, one of New Zealand’s greatest sailing sons, who won the 1995 and 2000 America’s Cup as well as the 1989-90 Whitbread Round the World Race and the 1994 Trophée Jules Verne.

‘I was brought up with parents who weren’t doing your typical 9-5, my mother being an artist and my dad a yachtsman,’ explains Sarah-Jane.

‘We were used to long periods of Dad being away or being on the road following him or joining in. Holidays were spent on sailing adventures and even the smallest outing with my parents, like a walk, would most likely involve climbing a cliff or wading through a river; they would never take the easy route.

‘My father was very passionate about the environment and could see clearly the problems, such as climate change, that the world was and is, at greater acceleration, facing.

After years of sailing around the world he had seen first-hand a decline in the environment.’

This foresight inspired the work of the 36m (118ft) expedition schooner, Seamaster, now called Tara, which Sir Peter Blake sailed around the world to draw attention to threats to the environment.

On 5 December 2001, while leading an expedition to the Amazon, he was murdered by pirates after they boarded Seamaster at Fazendinha, close to the Brazilian city of Macapa.

‘His passion for the environment was so great and so clear,’ says Sarah-Jane. 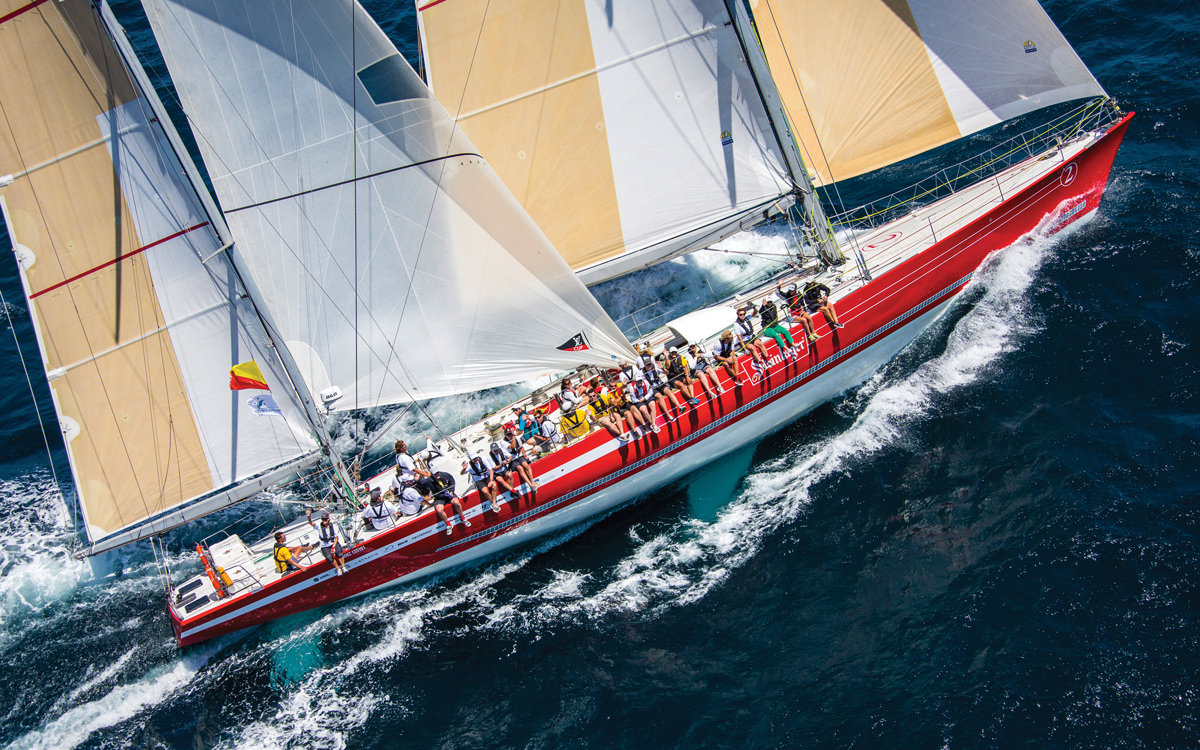 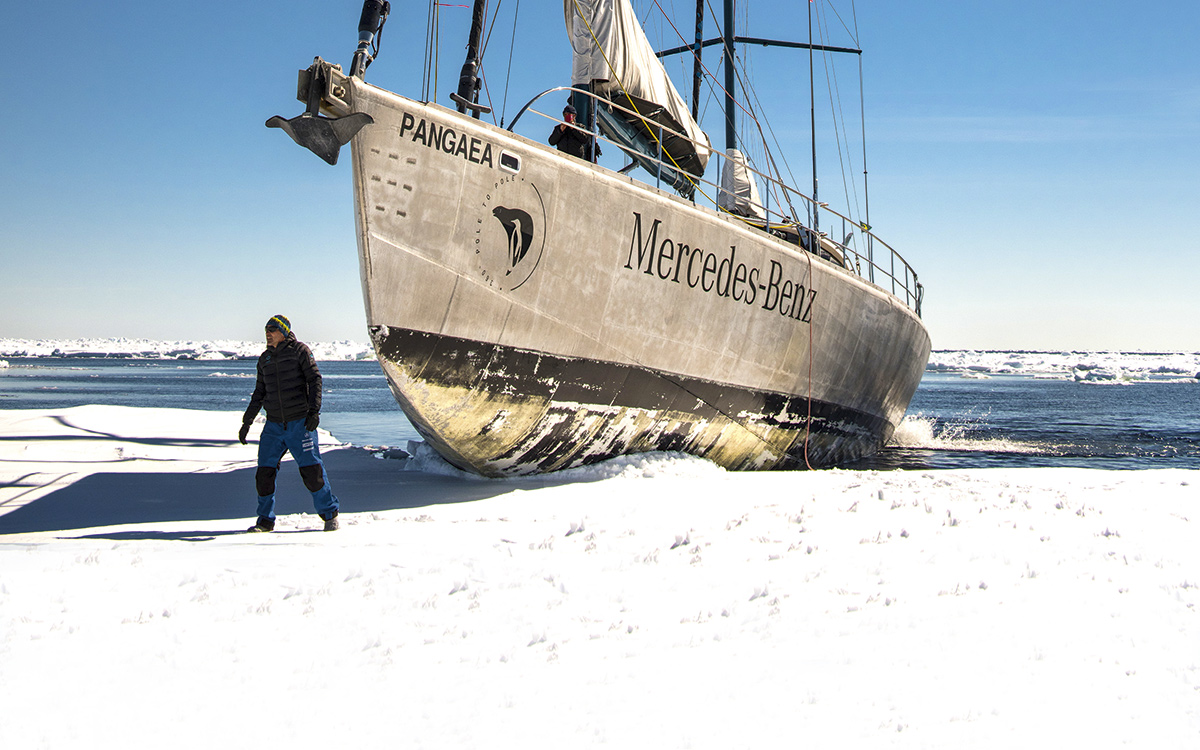 Mike Horn is not a man you forget easily, yet if you were to name the world’s most famous sailors,…

‘It was hard not to be affected by it, hard for it not to rub off on you. I am also acutely aware of these issues, having been inspired by my father, that I cannot help but speak about them in some way through my work.

‘He, one individual, with a great team, had effected some change or awareness for these issues and I, having witnessed this, believe that we all can and need to desperately fight the good fight as our futures and that of our home, the planet, depend on it.

‘We need to do this in teams, community teams made up of different types of everyday people with differing skills. We don’t just need superstars for these changes.’

As Sarah-Jane highlights, Sir Peter’s most successful sailing teams were ‘not made up of the most skilled individuals but the best collective group – people who could rely on each other to get the job done and do it with a smile on their faces. I think this idea of teamwork was one of the most inspiring things about my father.’

Educated in the UK at Chichester, where the family has a home in nearby Emsworth, and then Dorset, Sarah-Jane studied drama at Bristol University.

Sir Peter Bake encouraged his creative daughter, but she found herself ‘less and less into performing, and more into behind the scenes.’ 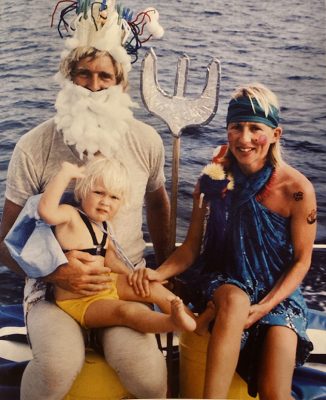 Sarah-Jane has been influenced by her ocean-loving father and her artist mother, Lady Pippa. Credit: Sarah-Jane Blake

So she followed up with a diploma in theatre design, with a special interest in costume.

Her childhood was punctuated with sailing cruises to all parts of the world – the Pacific islands, Easter Island and Patagonia.

‘Dad would phone and say, “Come and join us,” from Antarctica or the Amazon. It was too hard to refuse. A childhood of travel and adventure has continued to influence me with a lust to keep finding out what is over the horizon – physically and metaphysically. I have a curious mind,’ she notes.

Just like her father and mother, Sarah-Jane’s own wanderlust soon set in, travelling in Nepal, where she taught drama at the International School in Kathmandu, before heading to India, Thailand, and Cambodia.

Then she got a call. A documentary film was being made about Sir Peter Blake in New Zealand. Could she fly to the country?

‘At the time, I had no plans of going there,’ she recalls, but she went and then stayed.

Alistair grew up in Auckland and had studied outdoor education at Auckland’s University of Technology before he found work on the media boat for Bruno Troublé at the 1999 Louis Vuitton Cup in the Hauraki Gulf.

He met Lady Pippa Blake, and ‘cheekily’ asked her to put his CV in front of her famous husband.

It worked, and Alistair started working on Seamaster, then the environmental-campaigning sailboat of the Jacques Cousteau Foundation.

‘My first-ever paycheck was from Cousteau. And I still have an original red beanie,’ recalls Alistair, who spent two years working on Seamaster.

Sir Peter Blake was captain of the foundation from 1997 until 2000 when he left to set up Blake Expeditions. 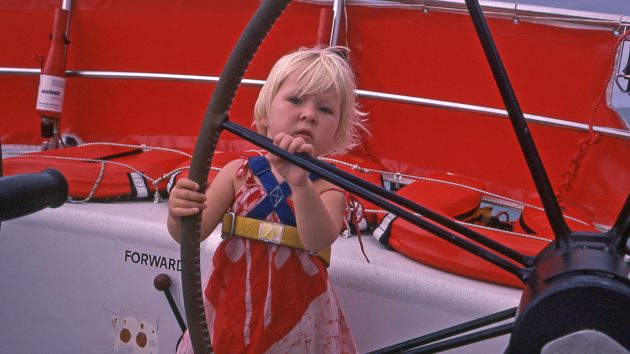 Their romance was forged in a storm at sea.

Sarah-Jane had last been on Lion as a two-year-old, sailing from New Zealand to England. Alistair was the skipper on the fateful voyage to Noumea, and the storm on the return trip that defined it.

For three days, Lion sailed under storm jib alone, in 70 knots of wind. The yacht was knocked down three times.

‘I wouldn’t want to do that again,’ Sarah-Jane says firmly. ‘When we got back to New Zealand, we moved in together.’

The call of the ocean

The next five years were spent with Alistair, working on boats around the world. ‘But I felt a bit lost, out of the theatre,’ says Sarah-Jane.

Following sponsorship from the Dubai Government, the couple also crewed a Volvo 70 on a tour of 200 venues including Ireland, Lisbon, the Caribbean, Pacific Islands and Australia. 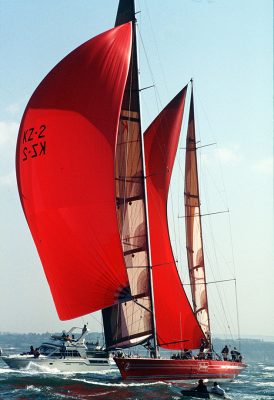 Motivated by a desire to sail on their own, they bought the 43ft Darth Vader in 2013, but continued to sail commercially, working for five years with the New Zealand Sailing Trust, not only taking students out on Lion but also on Sir Peter’s winning Whitbread yacht, Steinlager 2.

By 2017 and after a six-month refit, they set off to cruise the world on Darth Vader.

They got as far as Tonga, when an electrical issue surfaced; it was finally found to be an earth leak from a hidden screw driven into an anchor winch power cable.

They continued cruising with a disabled electrical system, reaching Vanuatu and Fiji, before deciding to return to New Zealand.

To get by, both Sarah-Jane and Alistair worked on commercial boats.

But the creative spark burned bright through all this. Sarah-Jane developed a performance piece, based on the Edward Lear poem, The Owl and the Pussy-Cat, which she and Alistair perform on Darth Vader at fringe festivals around New Zealand.

Miniature worlds and puppetry feature in her simultaneous virtual reality and live performance work, which has grown out of her sailing blog, www.darthandstormy.com

‘My mother has been a big influence on me in terms of pursuing art and often took me to exhibitions, pointing out artists of interest in books and exposing me to potentially more bohemian ideas, showing me there were alternative ways of looking at the world,’ says Sarah-Jane. 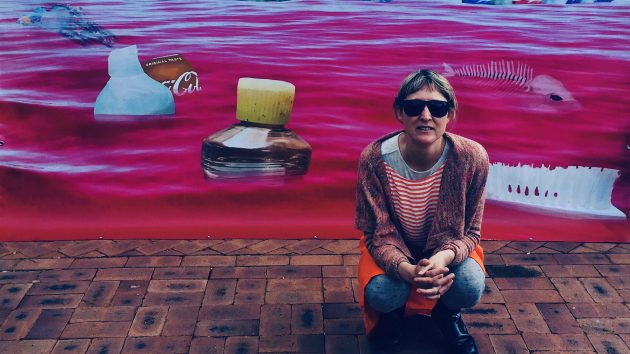 Sarah-Jane is an experimental artist, performance designer and deviser, as well as a sailor. Credit: Sarah-Jane Blake

‘Both my parents have influenced me greatly and I found myself in the past years living on a boat and making art below decks; so quite a combination has transpired.’

But there are challenges in all of this.

‘When I was two years old I sailed from New Zealand to the UK and I think this early childhood influence has drawn me back to being on the sea time and again. It is a spiritual home to me and feels a naturally instinctive place to be. At the same time, being on the sea and being deprived of much stimulus is a great place for an imagination to thrive, for there is not, at times, much else going on!’ 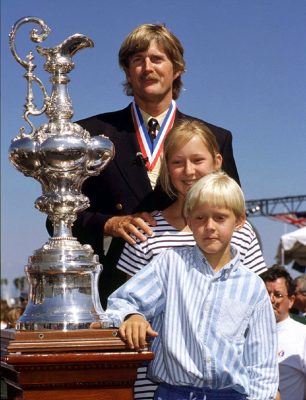 Instead, they have shifted their energies to fixing up their home on Waiheke, and Sarah-Jane has gone back to concentrating on her art.

An impressive, emerging artist with her own take on creativity, Sarah-Jane combines performance and visual art, while trying to meld it into an ocean-cruising lifestyle.

She’s recently developed a mystery trail for locals to explore on her home island of Waiheke.

She has also produced a series of mixed-media prints which are sold to support the Hauraki Gulf Conservation Trust and the Waiheke Marine Project.

‘The prints are a response to the declining state of the Hauraki Gulf, and the world’s oceans, which I have seen first-hand… but it’s also a celebration of the ocean and the wonderful creatures that inhabit it,’ she explains.

And perhaps the COVID-cut trip was a blessing in disguise.

‘There are better things we can do for the world right now, rather than bugger off and do a jolly,’ notes Alistair.

Sarah-Jane agrees: ‘We have a massive sense of doing something bigger than us, that’s good and wholesome. We want to restart people caring about the environment, as it must be cared for. We want to make a difference.’

Sarah-Jane Blake is certainly adding to the legacy of her parents, and in the most honourable way possible, by combining their remarkable attributes: as artist, explorer, adventurer, and a deviser of new things entirely.

This article was originally published on yachtingmonthly.com on 25/11/21

The post On the shoulders of a giant: the legacy of Sir Peter Blake appeared first on Yachting World.