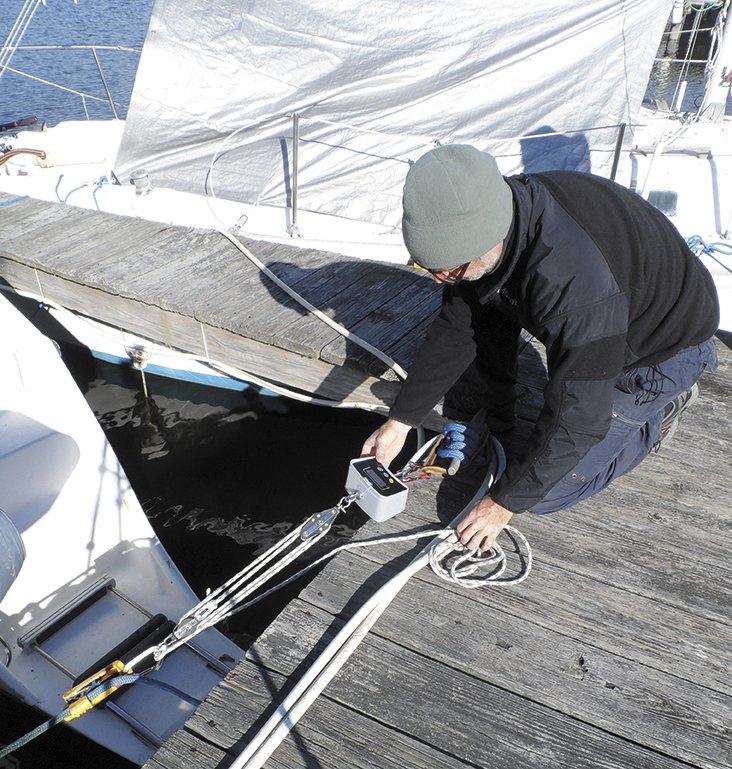 For those of us with boats in the hurricane belt, we should already have a storm refuge (or haulout yard) selected and a plan for securing the boat. And that plan should include a survey of the mooring lines, anchor rodes, docklines and snubbers that we intend to use. Which rope materials are best for the job? We know chafe gear reduces external friction, but how can we combat the heat build-up caused by internal friction between fibers as the rope is repeatedly loaded?

In Practical Sailor’s upcoming eBook on storm preparation, our testers evaluate the frequently repeated warning that under extreme loads, dock lines, drogue tow ropes, and anchor rodes can part due to overheating caused by internal friction between fibers as the line stretches and relaxes. But what percentage of a rope’s breaking strength is considered an extreme load? And how does the frequency of the load cycling affect heat build-up? And most importantly, how can we prevent this intra-fiber heat buildup from occurring?

Ultimately, results from Practical Sailor’s mooring and dockline friction tests, found that although intra-fiber friction is a real threat, the more troublesome threat is our obvious enemy-external friction caused by rubbing on chocks, anchor rollers, docks, fairleads etc. And the risk of internal friction on smaller diameter ropes is far less likely than it is on larger diameter ropes.

Ropes greater than one-inch in diameter are subject to internal heating if loaded past their safe working limit or loaded at high frequency. Ground anchor and sea anchor rodes are cycled at low frequency; although the core will see some increase in temperature, it will not progress to the point of weakening the rope unless the rope is loaded beyond the 10:1 safe working limit. If the anchor rode is sized right, it will never be over-strained or overheated.

Sea anchor rodes as well as tow lines for drogues, on the other hand, are often specified at about the same size as anchor rode, even though they are subject to much greater forces than a boat anchored in a harbor. Instead of 10:1 safety factor, a line for a drogue or sea anchor could easily be operating at safety factor of 5:1, or even less. Thus, a larger sea anchor rode can indeed be weakened by internal heating.

Could internal friction have caused Golden Globe racer Susan Goodalls drogue to part, a failure that contributed to her boats dismasting? Although external friction is the more likely cause of failure in drogue or sea anchor lines, the loads imposed on a sea anchor rode can create enough internal heat to cause failure. And as we saw in our drogue evaluation, the extreme stopping power of the Jordan drogue that Goodall was using can impart significant loads on ropes, splices, and deck hardware. These loads were among many factors that prompted us to issue a warning about using metal thimbles in lines and rodes that are subjected to extreme loads.

Dock lines are more serious problem. If the boat is exposed to short-period chop from the side, the frequency can be high and the force can exceed the 10:1 safe working limit. Core temperatures above the boiling point are possible in dry conditions, and even with spray to cool the rope there may be significant weakening. Add to this considerable frictional heating at contact points and special precautions are required.

So what can a sailor do? Our testers came up with five simple steps to take to prevent heat build up in your dock lines and rode.

Anti-chafe gear positioning. Avoid sharp turns because these increase friction. Often poor cleat positioning can lead to extreme bends at a hawse hole or chock. Our review of deck cleats on common production boats revealed a variety of serious problems.

Minimize the run. Reducing the distance between the anchor point and the friction point will reduce the back-and-forth motion that will increase friction. Polyester or Dyneema pendants through the chock will combat friction here. Short non-stretch pendants attached to nylon snubbers and mooring pendants reduce rode motion over the bow rollers.

Avoid slack lines and bouncing. In a recent article on storm preparation we discussed motion control (see PS July 2016 Spring Lines for Storm Preparedness). A boat that is bouncing on its lines increases chafe, frictional heating, and forces. While it is necessary to maintain enough slack to accommodate changes in tide, excess motion should be controlled through the use of elastic devices or slender nylon tensioning lines. Stop the bouncing.

Choose the correct size. When truly severe weather is expected, sailors like to double up lines and install oversize lines, but the average boat does not have cleats large enough to accommodate the required dock line size. We have taken to installing strong Dyneema loops over the cleats to allow attaching multiple large lines to a standard cleat. This should not overload the cleat if it is properly installed. This setup allows the use of multiple lines in multiple directions to control motion and to keep forces within the appropriate working load limit for nylon.

The post Overheating in Docklines and Rodes appeared first on Practical Sailor.