A violent storm, broken tiller and leaking petrol put David Pyle and crew in great peril on a passage to Australia in an 18ft Drascombe Lugger

Our Great Seamanship series tells stories of supremely difficult epic voyages, interspersed with tales of the humdrum that excel by virtue of being beautifully written. Australia The Hard Way by David Pyle (republished from the original 1972 version by Lodestar Books) falls well and truly into the epic category.

David Pyle was a young sailing instructor who’d crossed the English Channel in a Wayfarer; then he designed and built a 27ft yacht to compete in the 1968 OSTAR. All this turned out merely to be a prelude to the great adventure that was to come when he and Dave Derrick sailed an 18ft open Drascombe Lugger called Hermes to Australia.

In his foreword to this new edition, Pyle notes that the two young men made the trip for no better reason than to prove it could be done. Rather than going by conventional yacht, the Drascombe would allow them to use rivers and harbours impossible for other craft. An example is that, rather than entering the Indian Ocean by way of Suez and the Red Sea, they cruised instead through Iraq down the Tigris and into the Persian Gulf.

This is a book not to be missed in its entirety, but for now we’ll share with them the passage across a stormy Aegean at the height of the Meltemi… 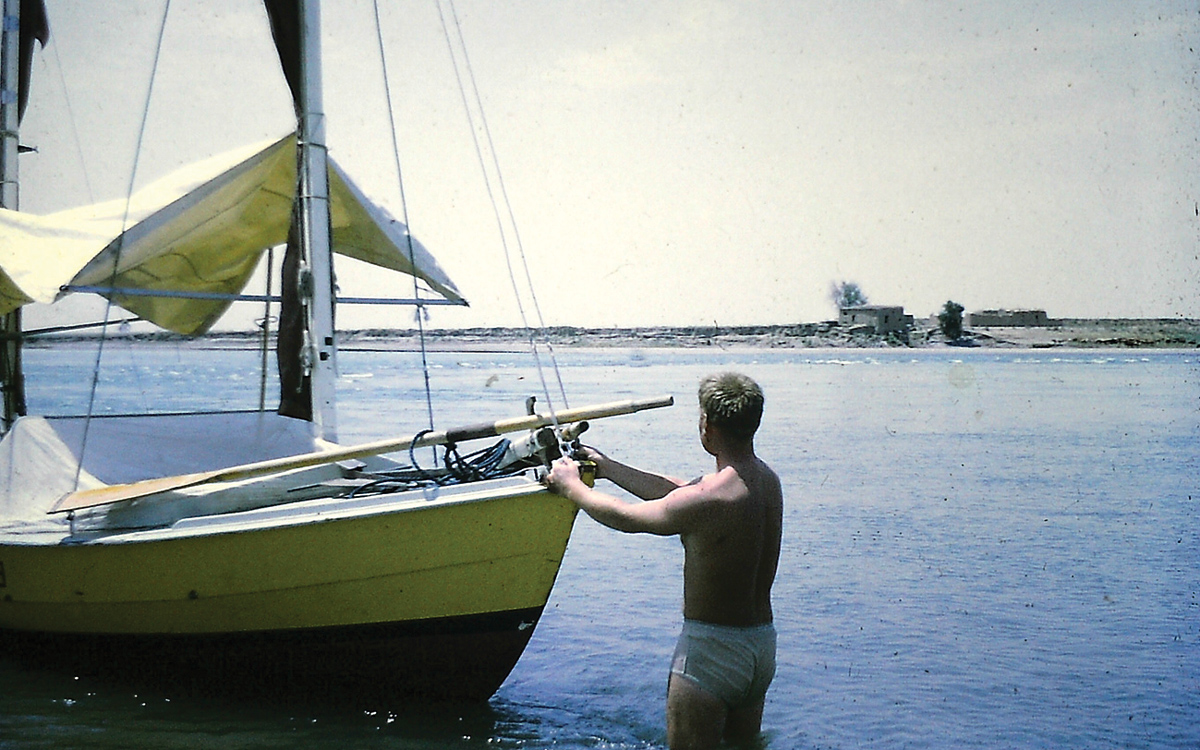 From Australia The Hard Way by David Pyle

The local fishermen of Amorgos confirmed our suspicions. The etesian winds had begun and we had still 60 miles to go before Kos, an island off the south-western corner of Turkey. It was also the worst stretch if a north­erly was blowing, with no protection from any islands except one, Levitha, which was very small and uninhabited except for the lighthouse keeper.

For 300 miles north there was nothing, a long enough fetch for a northerly gale to produce a considerable sea. We had to take a chance and attempt the crossing now, before the seas really built up.

The wind stayed light until sunrise the following morning, when once more a stormy north-westerly began. Levitha was only half a mile off the bow; within half an hour we were sailing into a cove on her southern shore, the most perfect natural harbour in the Greek islands. We dropped anchor and both turned in for a fitful slumber on our now leaking air beds. 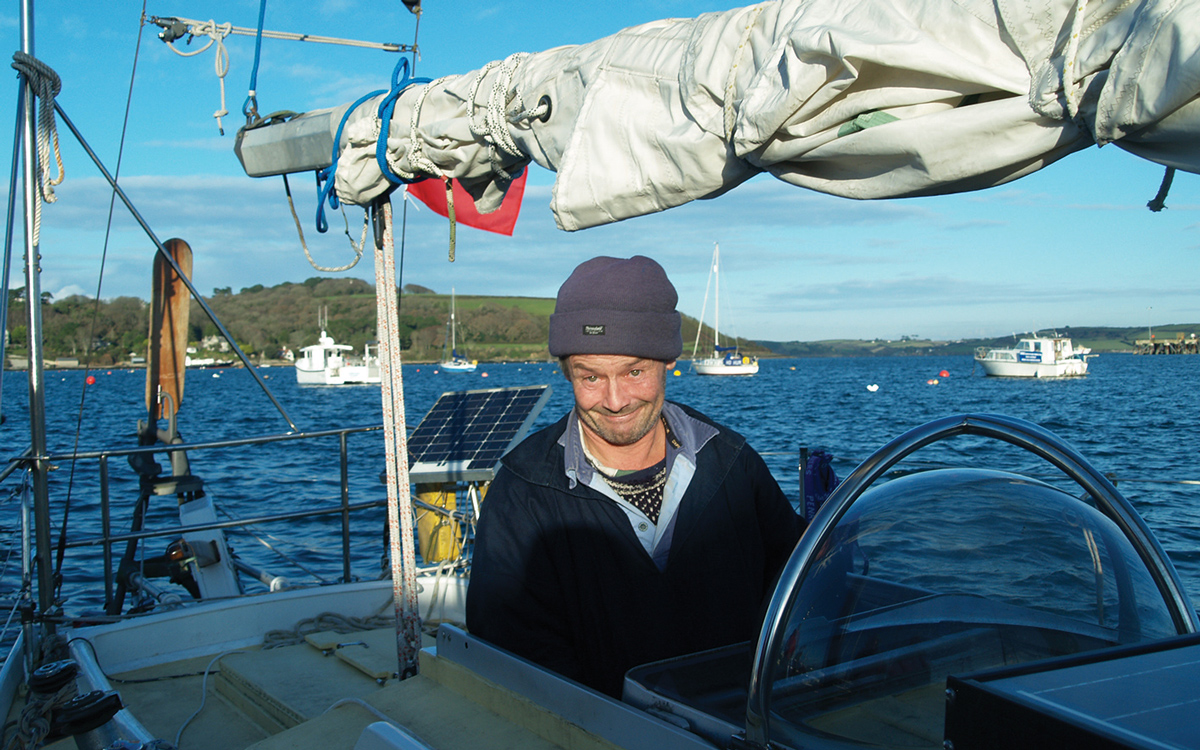 Captain Bungle’s Odyssey by Paddy Macklin is a book belied by its title. Extraordinarily self-effacing, Paddy makes light of a… 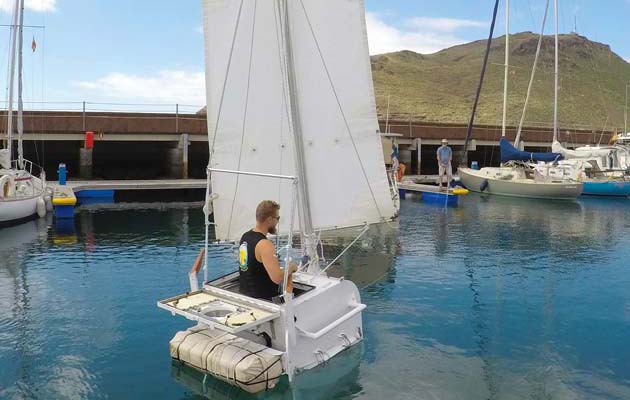 Just 24 hours into his first attempt to sail solo across the Atlantic in Undaunted, his 42-inch yacht, Matt Kent…

Later that morning we awoke to the noise of the wind howling through the rigging; Hermes was perfectly sheltered, but we still had another 40 miles of open seas to cross before we were out of danger.

For three days and three nights it blew a full gale. On the fourth day I decided that we had been on the island long enough. For a few hours the previous night the wind had moderated, and might do so again tonight. The seas, with the long open fetch northward, would be quite large, but 40 miles to the east lay Kos.

Its harbour was a farther 15 miles on its eastern extremity, but to its north lay Kalimnos, and a few other smaller islands, giving some kind of shelter. All movable objects were lashed down; our external buoyancy tanks were fixed around the gunwales but left deflated; by nightfall we were ready and, with only the genoa up, we crept out of our little cove. 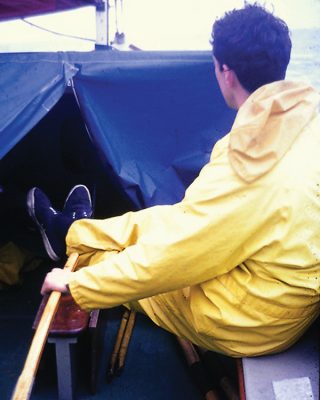 For a while all seemed well; the wind was from the north-west and Levitha offered some protec­tion from the seas. But as we came out from under her protecting shores, it soon became evident that we had a rough passage in store.

The seas were running in onto our quarter, and I kept glancing over my shoul­der with a wary eye, estimating their size and potential danger. They were hitting Hermes 10-15° off the stern, which was preferable to a direct run, where she’d career off on either tack while surfing down the front of the waves.

But it meant a continuous strain in one direction on the helm, trying to prevent her rounding up into the seas and being hit beam on. It took all my strength to keep her on course and the thin laminated tiller often bent at an alarming angle.

Within half an hour of leaving Levitha, the wind suddenly increased and the seas began to break and foam past us. “Get the genoa down and change it for the working jib,” I yelled, trying to make myself heard over the roar of the seas and the screaming wind. Dave was now highly profi­cient at changing headsails, and the working jib made helming that little bit easier. Meantime my brain was working full-time, trying to work out the most practical solution to our problem.

I thought of lying to the sea anchor; but this would be completely impracticable, as the rocky shores of Kos were to leeward of us, and in time we would have been driven upon them. The only solution was to run before the wind and seek shelter farther on.
After an hour the wind subsided from a full gale to 25 knots. I was extremely tired, with pains in my arms making it almost im­possible to grasp the tiller. I handed over to Dave. Ten minutes later another squall hit us.

I could sense that Dave was having difficulty in handling Hermes. Suddenly a monstrous wave came up astern like a car on a big dipper, Hermes was picked up in a welter of foam and surfed down the face of the wave, skidded sharply to port and was then hit beam-on by a break­ing crest. 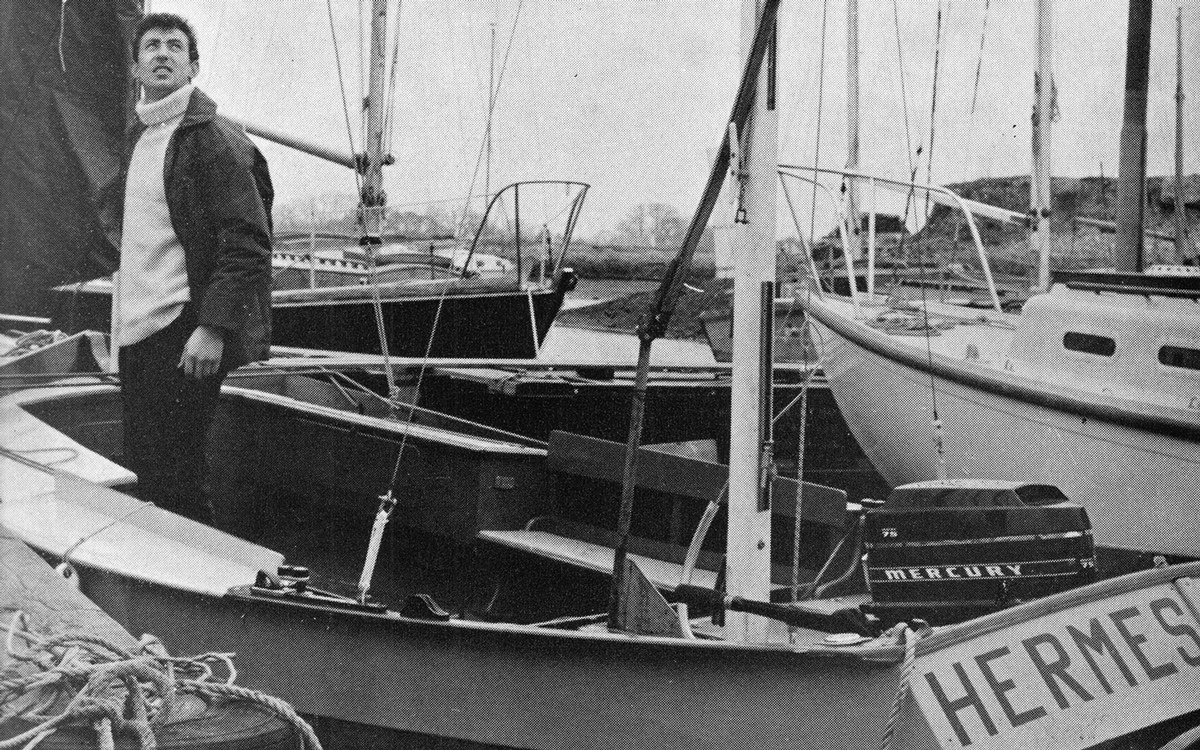 We both clambered frantically to windward, to try to keep her on an even keel. My mind was reeling. Certain that we were going over, I gasped for breath and swallowed a lungful of water.

Coughing and splut­tering, I instinctively grabbed the helm to try and bring her back on an even course. But when I caught hold of the frail wooden stick, it fell to the bottom of the boat, broken off at the rudder stock.

The post Sailing around the world in an 18ft boat: Extract from Australia The Hard Way appeared first on Yachting World.