Buying a family yacht with room to accommodate young and old means looking for some very specific characteristics. Having enough space for living, studying and – increasingly commonly – office space, all aboard a bluewater cruiser that is easily handled, can be a hard balance to strike. Whether you’re sailing with young children or growing teenagers will also impact which is the right yacht for you – is safety on deck or private cabin space more pressing?

Alan and Merlyn Evett decided during the pandemic to take the leap and go sailing full time with their two children, aged six and eight. They’d already purchased their Sweden Yachts 45 but the yacht was stuck ashore in Finland – lockdown gave them the push to become full time liveaboard sailors.

“We had bought her in 2019 and not been able to use her, so we made a plan to have a tradewind adventure before the kids got too old,” Alan explains.

The yacht had been chosen with the aim of accommodating two young children on a longer trip firmly in mind. “Safety was to us the first thing to consider. She is an extremely solid yacht and has a presence even at anchor that says that.

“Each of the children having their own cabin was also important because we knew that in bad weather they could be somewhere secure and safe. The yacht was built with every optional extra at the yard so there was very little that was retrofitted as you find on a lot of older yachts – that keeps things simpler, and I think easier to fix too,” explains Alan. 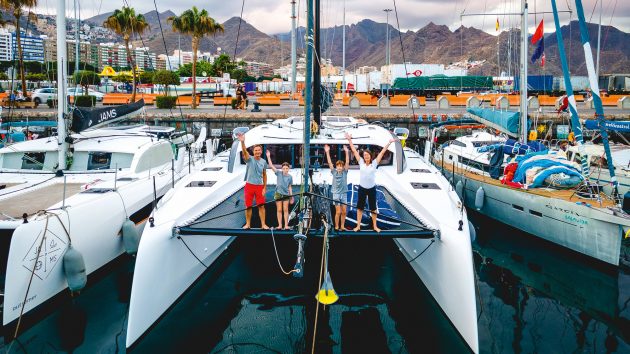 Many families choose the roomy, stable platform of a catamaran like this Outremer for bluewater cruising. Photo: Grand Large Yachting Odyssey

The family is now in Fiji and planning to sell the boat to return to work. Having sailed half-way around the world, some features have stood out for Alan. “We have 500lt of fuel, which gives us the range to get away from bad weather before it arrives if there’s no wind. I’ve found that gives us an extra feeling of security which you are so aware of sailing as a family.

“A deep cockpit is also a really reassuring characteristic for a bluewater boat, with lots of strongpoints to clip onto; we all feel secure even in bad weather.”

Some things, however, they would improve with hindsight. “Living with kids doing schoolwork aboard, and our own work online too, we would improve the battery capacity and charging for living at anchor.

“We have also found that, now we’re in the Pacific, a bigger, hard bottomed dinghy would be a big improvement on the inflatable we have, which has a heavy 4-stroke engine that can be a handful. With often quite long dinghy runs ashore and with lots of reefs about, that would make a big difference.”

Sian and Dez Hostad wanted to travel the world with their two teenage boys, Sam and Evan. Having first back-packed for a year, the novice sailors decided to move aboard a yacht to continue adventuring, and set about finding the right family boat on a budget. They eventually settled on a 1990 Oyster 435, Fat Susan.

Sian is candid about how little they knew when they started. “Firstly, we are not a sailing family. We are a family of non-sailors who wanted to travel with our kids and foolishly decided that travelling on a sailing boat would be an easy way of maintaining a base while we did that. How wrong we were! 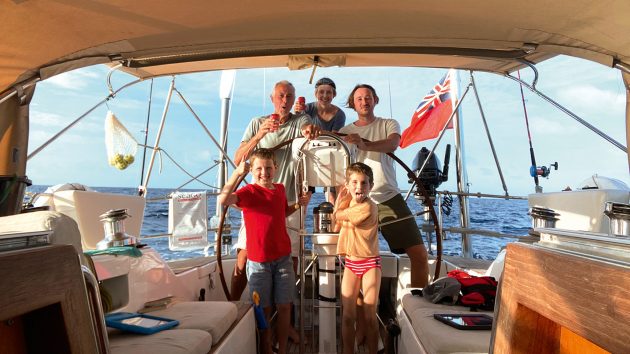 The Evett family aboard their Sweden Yachts 45

“Having no experience whatsoever of boats or sailing and having no-one to ask, I turned to the internet. I searched for articles about the best boats to sail around the world, the best family boats, etc. I learned loads about bluewater cruising, hull thickness, sea kindliness, centre cockpits and general boat design.”

The more they researched online, she says, the more they found a widespread resistance to sailing in anything less than a perfect yacht. “I also learned that there are two types of sailing people on the internet: the old school ‘proper sailors’ who don’t believe anyone should be allowed to step foot on a sailing boat unless they have 30 years of experience and know how to wield a sextant; and those who are out there for the adventure, not necessarily the sailing.

“I took notice of both types, as they all knew plenty more than I did. One group seemed to think it would be suicide to consider sailing offshore in a production boat. The other group seemed to be doing just that and quite well. I also read a lot of articles in sailing magazines, written by experienced and qualified sailors.” 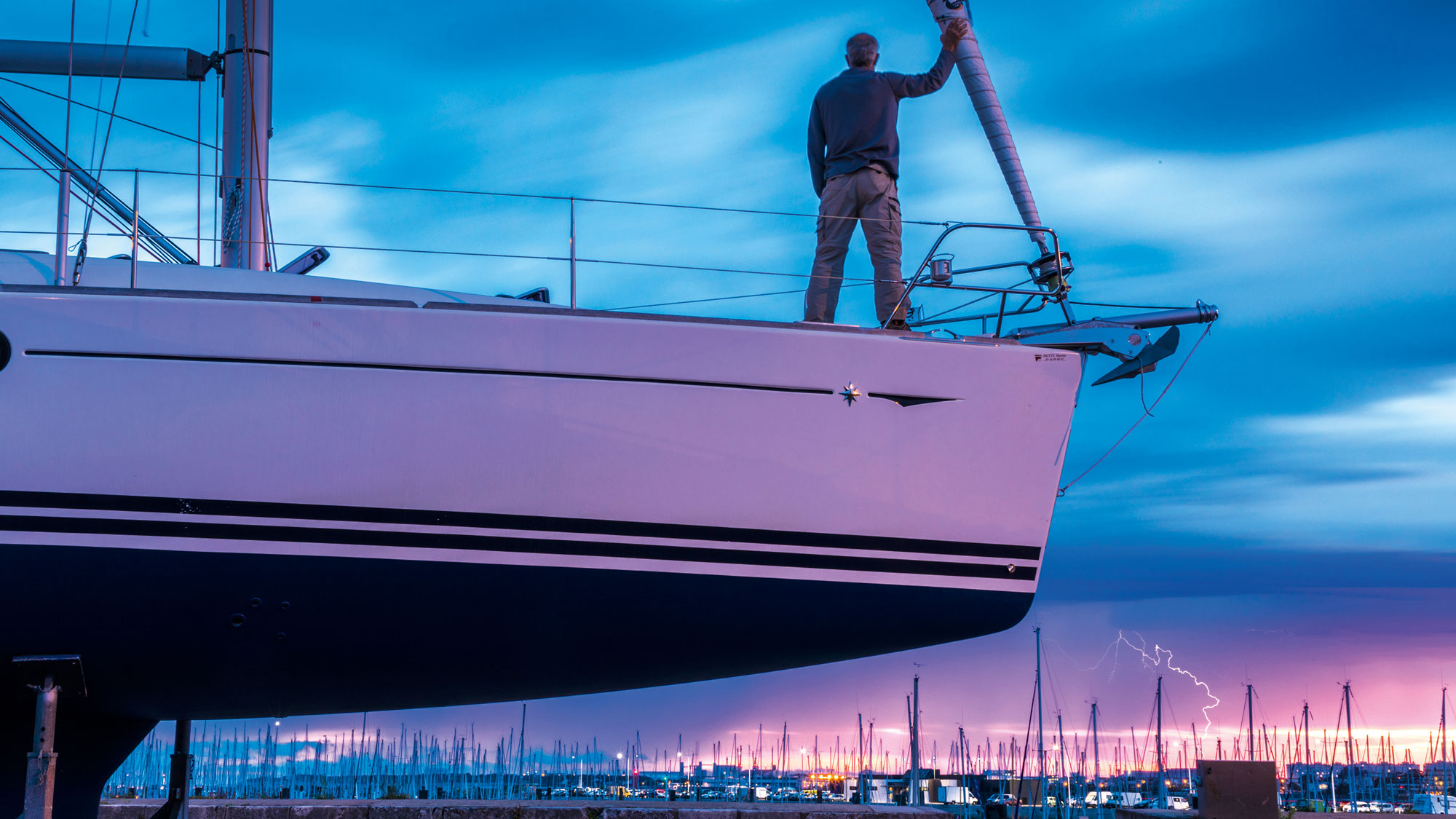 With new build waiting lists growing at an unprecedented rate, buyers are turning to the second hand boat market to…

After a lot of research, Sian and Dez decided they’d opt for an older, tougher second hand yacht over something newer. “From my internet research, I decided that I wanted a well-built bluewater cruiser rather than a production boat. My main concern was the safety of my family.

My confidence in the boat in big seas a long way from land was a priority as I already knew that all the other parts of sailing scared me – an RYA Competent Crew course in the Solent with an instructor who thinks sailing boats should always use full sails and be heeling at 40° sorted that out for me. He was loving it, I was crying.

“So, I wanted a ‘safe’ boat with a centre cockpit and a thick hull, in case we were hit by any whales or shipping containers. This seemed to be a valid concern on the internet.”

Finding a yacht that they could live comfortably abroad with children that were growing fast was also a big concern.

“When it came to living aboard, I decided we needed three cabins. The boys were 11 and 13 and growing fast. They should probably have their own cabins and a bit of privacy.

“I also didn’t want a dark and dingy saloon: I’d been to look at a few boats where the dark wood, stained ceilings and lack of light reminded me of old men with pipes in old English pubs.

“We wanted a light and airy saloon with plenty of room for a family of four. 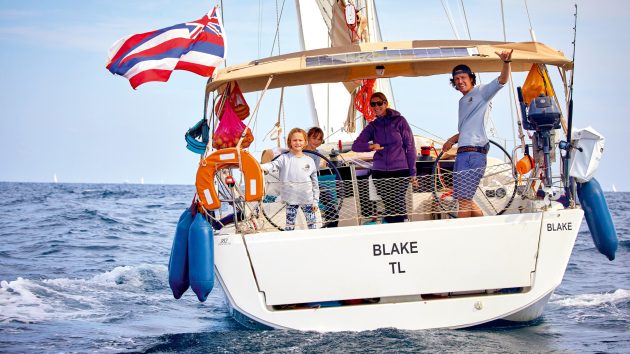 Ex-charter boats and owner/charter schemes can be an afforable way to buy a family yacht. Photo: James Mitchell

“We wanted room for diving kit and a diving compressor. We wanted wind vane steering. We’d need a generator and a watermaker. I spent many, many hours on YachtWorld.com and went to see lots of different makes of sailing boat, 40-46ft, young and old, in varying condition.”

After a long period of research, Susan says she decided several things given their ‘tiny’ budget (£70,000 plus another £20,000 for upgrades like replacing standing rigging, adding a watermaker etc). “First, that we didn’t have enough money. Secondly, no matter how long we waited, we would never have enough money. And lastly, whatever we got would be a massive compromise.

“After many months of searching for something we could afford I went to see an Oyster 435, a deck saloon version. It was light and airy with big windows in the saloon. It felt solid and well built. It was the right size for us.

“Each 435 was built to order, so there was a chance of finding one with a cabin configuration that would work for us. It was a proper bluewater boat, built to the highest spec for its time. The cupboards closed. There were only 65 built, between 1983 and 1995, so all of them could be classed as old, and some of the 435s for sale around the world were within budget – if we squinted a bit! And there’s always some movement in the price, right? 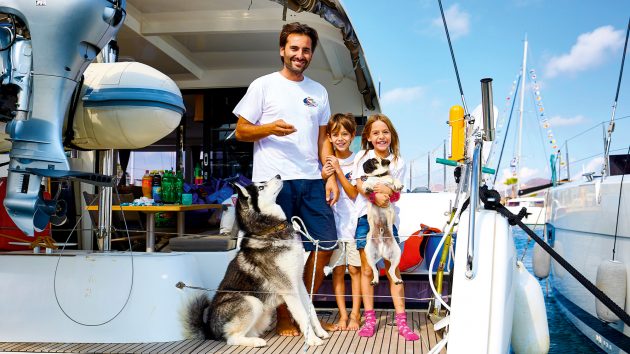 If your family includes pets you may need additional space! Photo: James Mitchell

“We had found our ideal boat. With hindsight, we probably shouldn’t have bought this actual boat, but in general, I think we chose well and we would buy one again.”

“Fat Susan has turned out to be an extremely well built, seakindly boat and we love her. Her ageing hardware and our lack of money (and possibly knowledge) have been the source of all the problems we’ve faced on our journey so far. We had to compromise a lot. We didn’t get the diving compressor, the wind vane steering or the generator. We didn’t have a watermaker for the first two years. We are slowly upgrading stuff and replacing things.

“Oyster has been very helpful when we’ve asked questions, despite being the boat’s third owners over 32 years. We’re part of the Oyster Owners forum online, which is full of like-minded, hugely helpful Oyster owners with a wealth of knowledge. We haven’t hit a shipping container, but we were hit by a whale in the Atlantic.

“As for it being a family boat, I’m not sure what makes a boat family-friendly. The 435s are a good size for a family of four, though most families considering this sailing life have kids younger than ours. Small kids squeeze into cabins more easily than teenagers.

“The most important part of our decision was safety at sea, but (with my limited knowledge and experience of other boats) I’m not convinced that any boat is significantly safer for families than the next one.

“I would say safety at sea for kids is more about setting boundaries and rules, explaining dangers, and sailing conservatively.

“The other, important thing is that we have met many, many people doing the same journey as us in a huge variety of boats.”