Only the top three teams on the season leaderboard are eligible to race in the final, winner-takes-all race. Tom Slingsby and Jimmy Spithill’s Team USA had both cemented their spot in the final race ahead of this final SailGP regatta in San Francisco.

The final spot was up for grabs heading into the weekend’s racing, though Nathan Outteridge’s Team Japan were in a strong position in third overall. 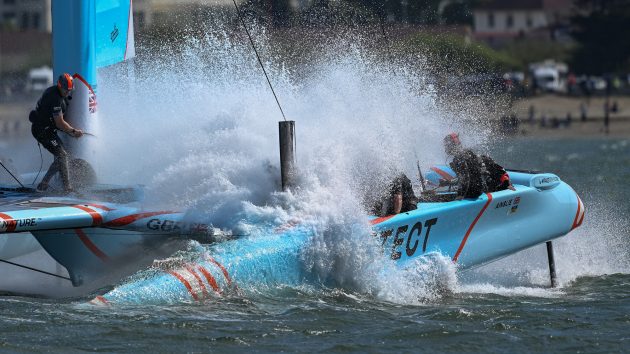 A strong performance on the opening day of racing from Nathan Outteridge’s Japan team saw it book its place in Sunday’s three-way battle for $1 million, set to take place after the last two races of the regatta on the second day of racing.

But it was the second day which saw much of the drama as several collisions took place in the extremely gusty conditions and one race was even abandoned due to a whale on the course.

With significant gusts and shifts throughout the day due to the wind blowing off the land, and some decent waves it was tough for the teams to foil consistently and they often looked at the edge of control. As such it was, arguably, only a matter of time until we saw a collision or significant crash. 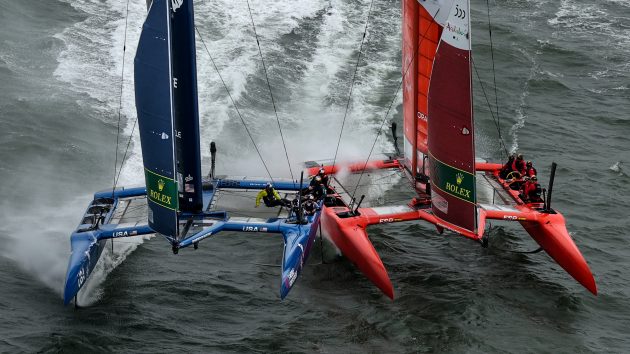 The first collision on the second day saw rookie Spanish driver Jordi Xammar, sailing for team Spain, barge in at the leeward mark managing to mount the stern of Spithill’s boat resulting in a huge hole on the bow of the Spanish entrant and a similarly large hole in the stern of the USA’s foiling F50.

Remarkably enough Spithill and his crew managed to finish the race, keeping to boat foiling as much as possible to prevent it filling up with water. However, with their position in the final at stake they chose to sit out the next race to affect a speedy temporary repair to their boat.

The second big moment came in the next race when Ben Ainslie’s British team were heading downwind on starboard tack. Peter Burling’s New Zealand team and the French team with Quentin Delapierre on the helm were on port, with both needing to avoid the Brits. Delapierre appeared to luff in order to take the Brit’s stern while the Kiwis – to windward of the French team – looked to bear away in order to slow and cross behind the Brits.

It was another big collision and, with both boats alongside each other, could have been very dangerous indeed as the boats mounted nearly hitting crewmembers. 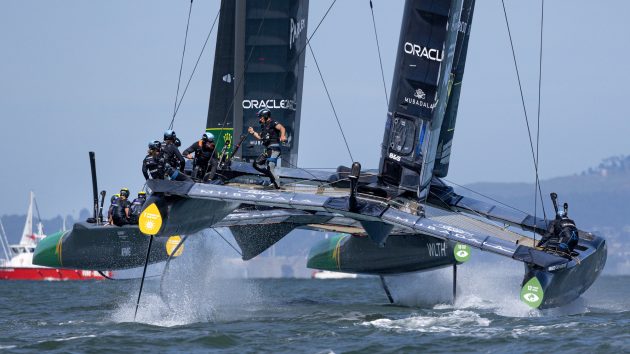 After all that action, the final race was something of a let down as a swinging breeze made the course a bit of a procession and Australia’s Slingby getting off the line in a good puff while his two competitors sat in light air unable to get their F50s onto their foils.

By the time Spithill got to the first mark in second place, the Aussies were already half way down the next leg and never really looked back.

Taking back-to-back victories in both the first season of SailGP and the second, Slingsby continues to prove he is a sailor at the very top of his game. The professional SailGP series sees him sail against some of the very best skippers in the world and he has bested them at every turn.