Developments in technology are now allowing us to see the shape and structure of the seabed, including vegetation, in increasingly clear detail. Rupert Holmes reports

Sonar and forward-looking sounders are often seen as the preserve of those whose primary interest is fishing. However, a huge amount of effort has been invested in these products over the past few years and the latest models can be powerful tools for both cruising and racing yachts. They offer sufficient clarity, for instance, to be able to pick out areas of seagrass and patches of sand in an anchorage.

Much of this improvement is thanks to the availability of CHIRP transducers that, unlike a traditional sonar, can distinguish between multiple targets through scanning using a signal of varying frequency. This enables them to show individual fish, rather than just indicate a shoal, to resolve vegetation growing on the seabed, and distinguish between a sandy/muddy shoreline and a rocky one.

For those of us who spend large periods of time in the Mediterranean during autumn months, when overcast skies or dark evenings can mean anchoring when it’s not possible to see the seabed, this could be a significant boon. As well as the obvious safety advantage, and convenience of being able to find sand at the first attempt, there’s also a benefit in avoiding damage to environmentally important seagrass beds. 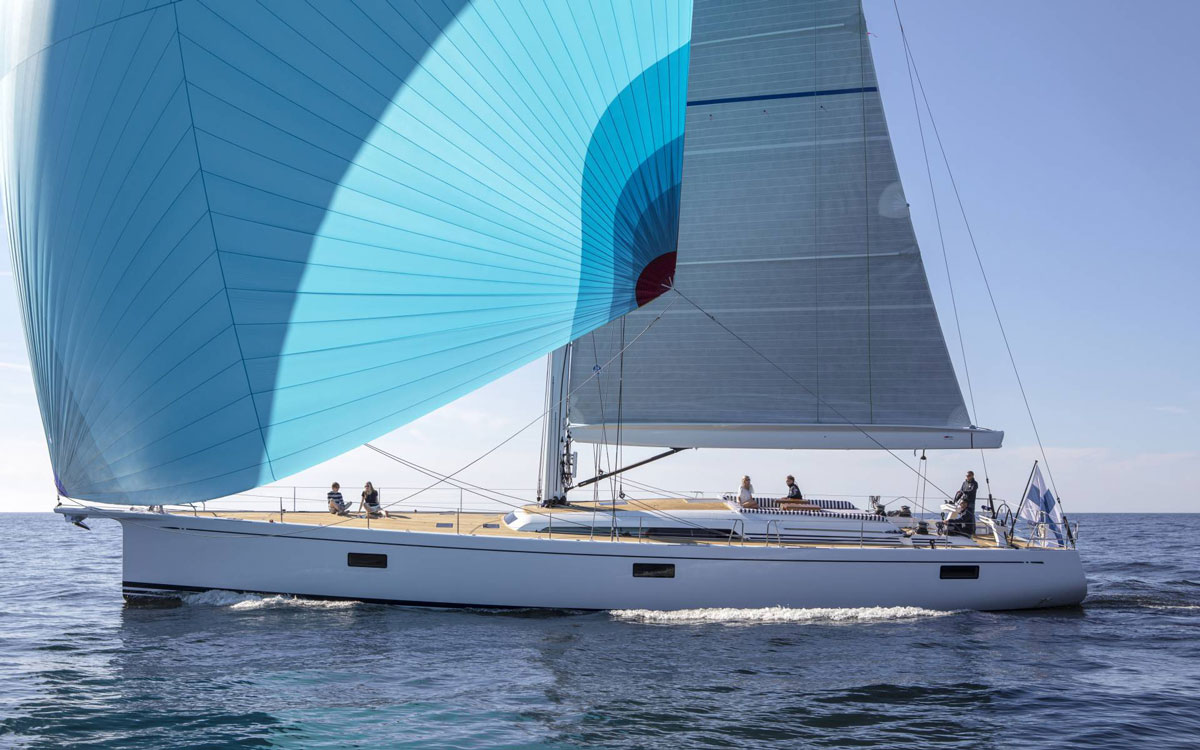 Yachting is usually pretty fast to embrace useful new technology, particularly if it helps win a race or if it… 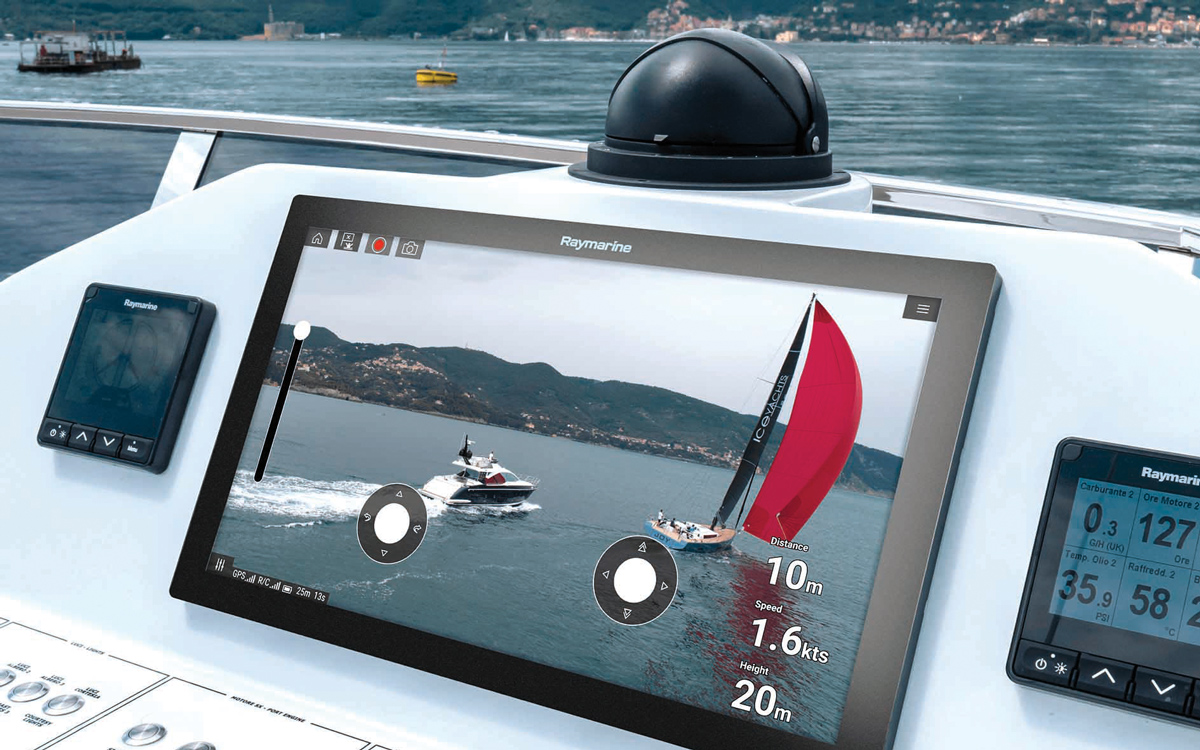 Google’s mission statement is ‘to organise the world’s information.’ This almost impossibly ambitious declaration of intent underpins the technology giant’s…

On yachts, we’re most interested in what lies roughly ahead of the boat, unlike fishing where a good picture of what’s directly underneath or to the side is often more important. This means not all transducers developed for the fishing market will work well for our purposes, but we’ve listed a selection here that could be useful.

Even so it’s important to recognise that forward-looking sonar doesn’t replace existing data sources such as depth sounder, charts and visual references. Instead it provides additional data to help make more informed decisions. However, short ranges of typically 30m-90m mean this is a tool for use in confined waters in which the navigator is focussed on the task and not distracted at a critical moment.

As with radar, a degree of skill and knowledge is also required to set the system up and to correctly interpret the picture.

Short tacking along a shoreline to gain relief from a foul tide is a key element of racing in many tidal areas. However, there’s an ever-present risk of grounding, which has been implicated in the subsequent loss of keels of several yachts, sometimes with devastating consequences. Anything that can help reduce that risk is therefore clearly advantageous. 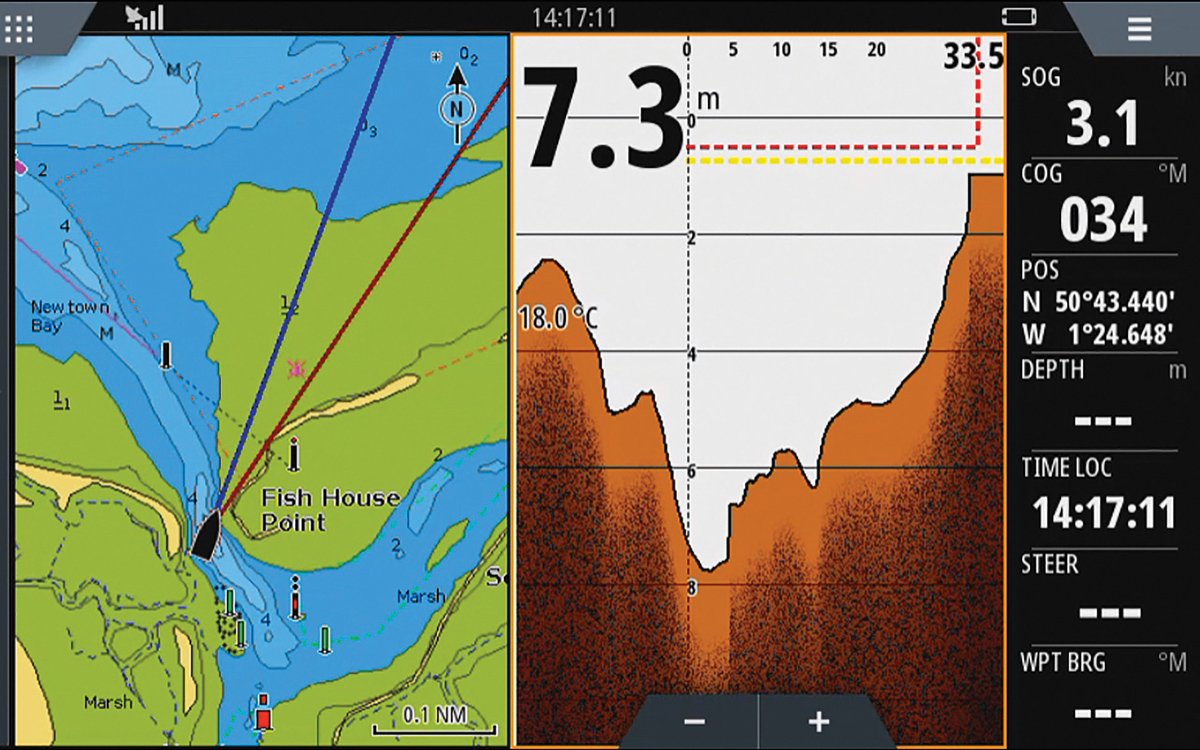 Professional navigator Mike Broughton specified B&G’s ForwardScan sonar for a new race-spec Swan 78 he sails as navigator. The system, which has a 180kHz transducer, scans the seabed over a 15° arc up to 90m ahead of the vessel, though gently shelving mud may bring the viable range in shallow water down to as little as 25m.

As well as showing a graph of the depth ahead of the boat, the ForwardScan data can also be superimposed on a chart, with shading to indicate safe, warning and critical depths. ForwardScan uses a removable slimline transducer that extends 31mm below the hull.

Writing in Yachting World, Broughton said: “I have used ForwardScan to great effect short tacking against a strong tidal stream in the Solent, gaining the confidence to tack back to the shore before our competitors helped make significant gains. Confidence that you are clear for just another boat length as you approach the shore can be gold dust information and allow your boat to achieve a clear lane of clean wind.” 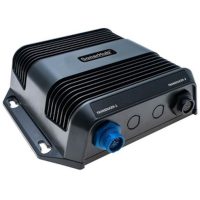 While B&G’s DNA is in sailing, and particularly racing, it’s part of the much larger Navico Group, along with Simrad and Lowrance.

The company therefore also offers a wider range of products, including a StructureScan transducer, which are geared towards fishing markets and show more detail of the seabed. 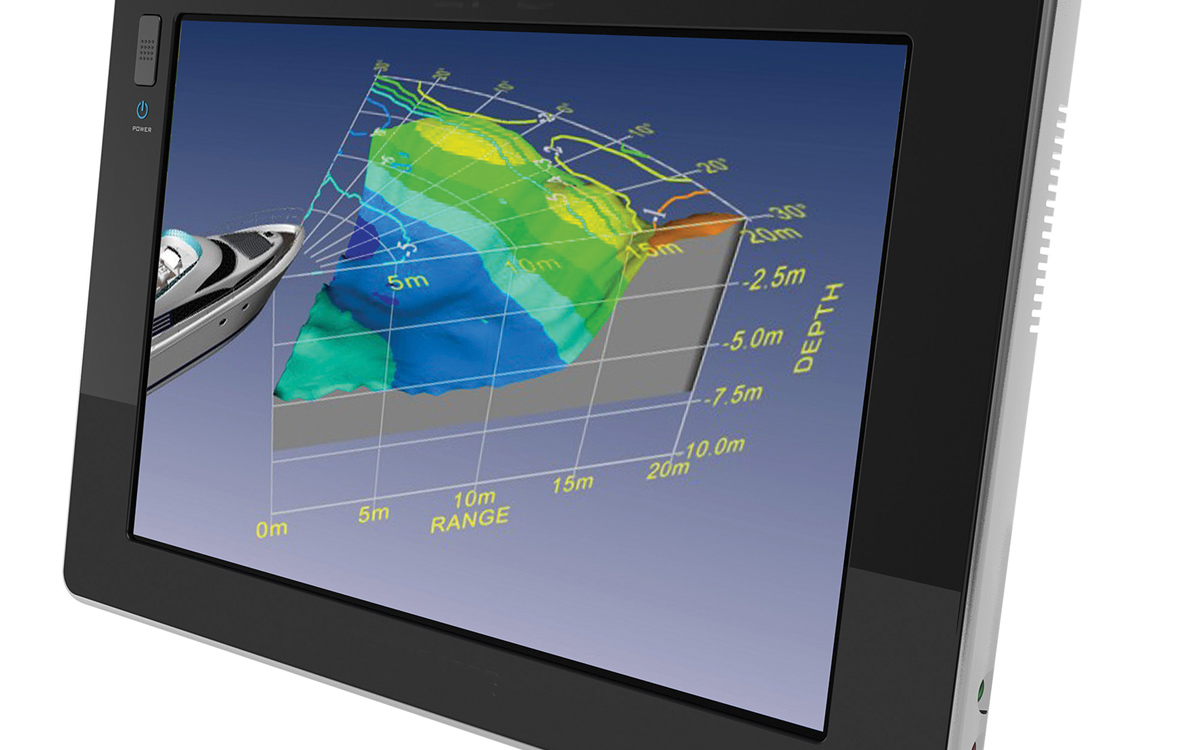 Long-established British brand Echopilot was one of the forerunners in this market and has been owned by the Danish Daniamant group since 2017. Echopilot’s range is optimised to show as much seabed detail as possible, rather than focussing primarily on displaying fish. It updates with very low latency and can be used at speeds of up to 20 knots.

The FLS 2D system has 30° beam width and maximum forward range of 200m, or ten times the depth in shallower water. The 7in screen uses different colours to represent different types of seabed structure, with hard materials such as rock showing as red and softer echoes from sand and mud showing as blue.

A more powerful FLS 3D model has twin retractable 200kHz transducers that give a 60° beam width. The range extends to 20 times the water depth, so around 200m in a 10m depth. Echopilot claims it can detect rocks at up to a distance of 500m.

Both models are also available in a black box format that will connect to any display with HDMI or VGA video input. In this case settings are controlled by a separate keypad that can be positioned next to the display. 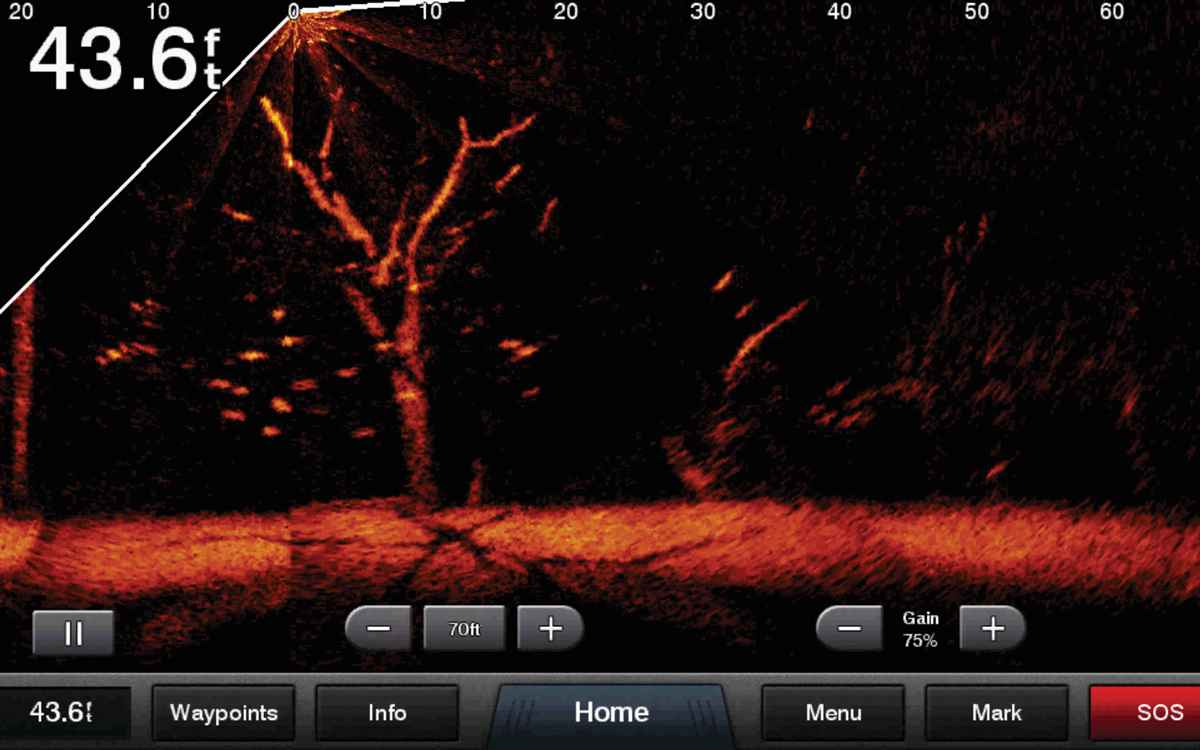 Garmin’s Panoptix LiveScope can differentiate between fish, seagrass and patches of sand

Many fishfinders show only the area below the boat or at the sides, but Garmin’s Panoptix products offer features that can be of use on cruising yachts. This range is available with through-hull transducers intended for fitting to yachts and has forward-looking functionality.

The FrontVü mode displays the seabed ahead of the boat at a range of up to 90m although, in common with other models, this reduces to eight to ten times the depth of water in very shallow water. The scanner has a 20° beam width and provides a clear picture at boat speeds of up to 8 knots.

The LiveVü Forward function allows you to see fish and the structure of the seabed at a reduced range of up to 30m. Both options are offered with the PS51-TH transducer at a cost of £1,360. This unit is a similar size to that of the B&G ForwardScan transducer.

Garmin’s top of the line Panoptix model, which has received rave reviews in the fishing community, is the LiveScope. This gives real-time scanning both forward and around the boat, with enough detail to see the difference between seagrass and patches of sand at a maximum range of 60m from the boat. On the downside, the LVS32 transducer is much larger and heavier.

While the ranges of recreational sonar units are clearly limited, they are a whole lot better than conventional depth sounders that have no ability to look ahead. Larger and more powerful transducers can provide more range at a frequency that allows a great deal of detail to be shown, but these may not be convenient to mount on a yacht and costs are significantly higher. 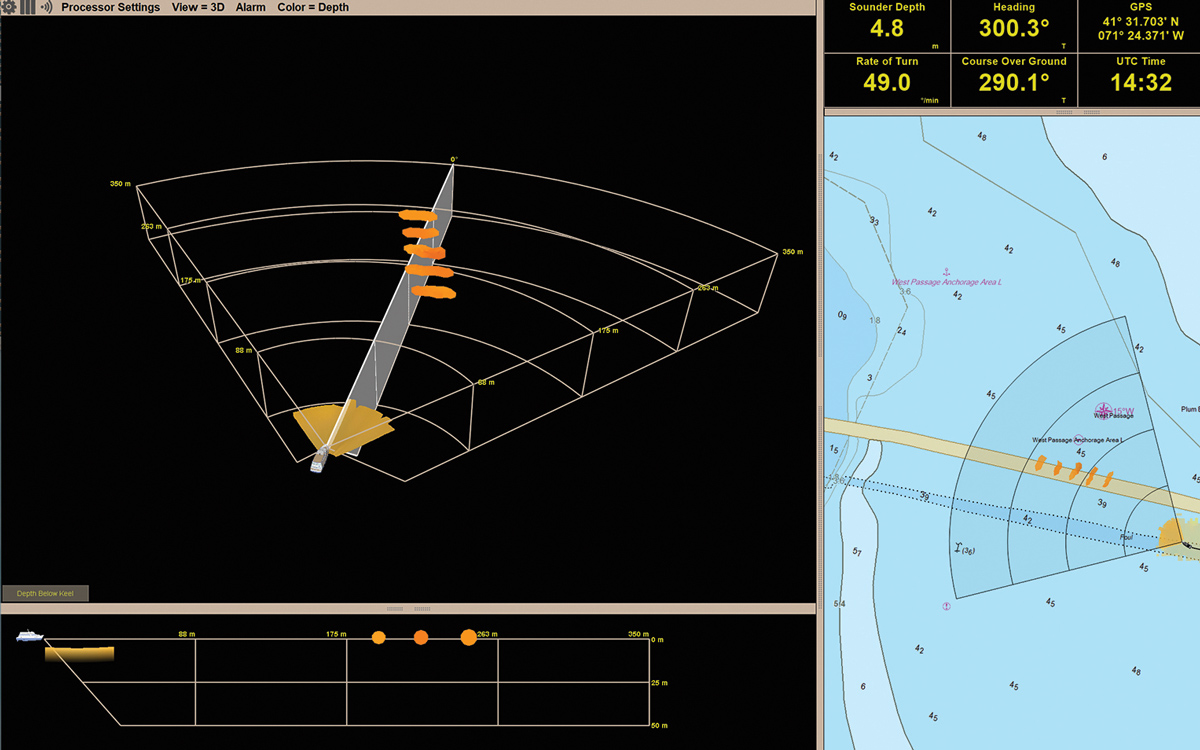 Rhode Island-based Far Sounder produces a range of forward-looking sonar for large vessels with ranges of up to 1,000m at operational speeds of up to 25 knots. The company’s latest model has a smaller transducer with a 350m detection range that’s suitable for craft of 18-40m length.

The sonar map can be overlaid on CMAP professional S56/63 series charts in a similar fashion to the way we’re accustomed to overlaying radar on a chart. The downside, however, is that the transducer is still large for a sailing yacht – it measures 160mm x 200mm (6.4in x 8in) and needs to be at least 1m below the surface.

Could this system be used by racing yachts such as IMOCA 60s to give advanced warning of a potential collision with whales or shipping containers? CEO Cheryl Zimmerman says the standard product could certainly do this for targets that are a couple of metres below the water.

She told me Far Sounder has been approached by race teams to “discuss some of the issues they are experiencing” and is “very excited” about the prospect of developing custom products with alarms to alert solo sailors.

With sonar there’s always a conflict between range and detail. A low-frequency sonar of around 80kHz will be able to reach greater depths, but without a great deal of detail. Conversely, a higher frequency unit, operating at around 200kHz, will reveal more detail, but at the expense of range. Larger and more powerful transducers can provide more range at a higher frequency, but these may not be easy to mount on a yacht and become expensive.

Accuracy can be affected by factors including location of the transducer and water conditions. The strongest echoes are from hard seabeds such as rock and coral, whereas gently shelving sand or mud will only be seen at closer ranges and even then may not be as distinct. 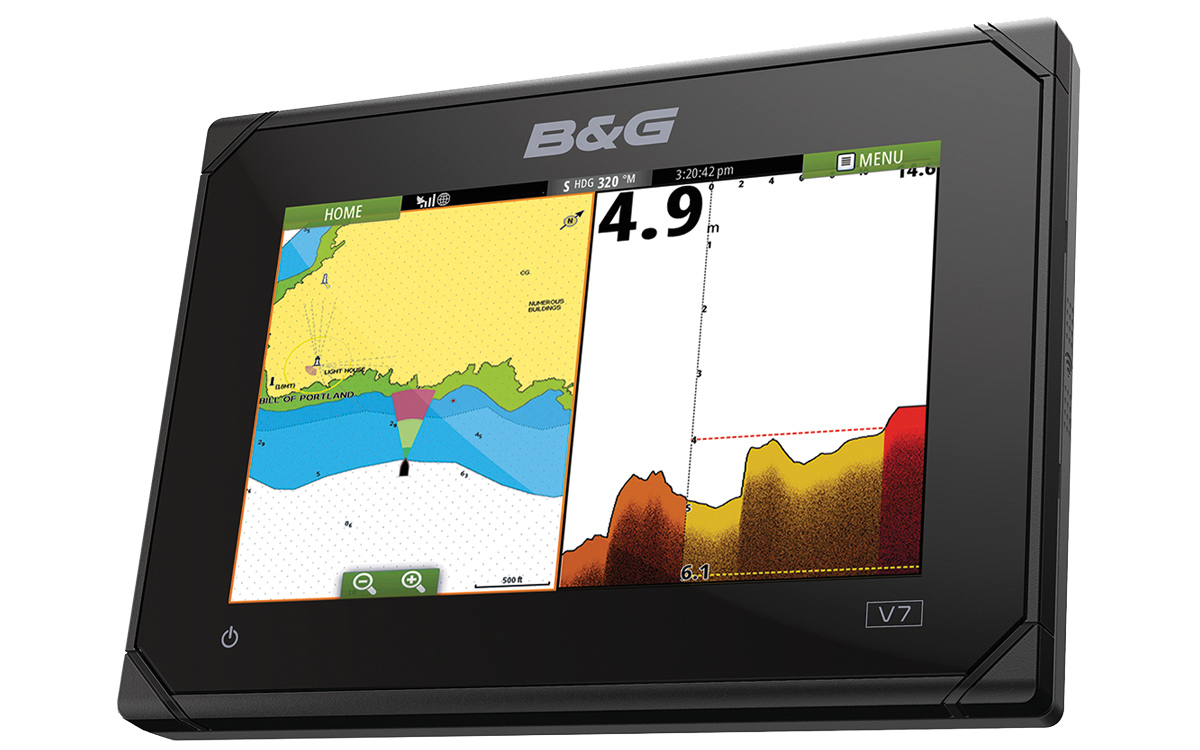 We’ve come to expect much of the basic functionality of instrument systems and sensors to be compatible across displays offered by different manufacturers. However, this is by no means automatically the case for sonar, where there can even be gaps in compatibility even within a single manufacturer’s product range. In addition, many MFDs lack the software needed to process sonar data, so an intermediate sonar hub may be needed.

Before buying sonar equipment it’s important to understand exactly what the chosen technology will do and the equipment it will interface with. The technology is certainly not for everyone and, with a few notable exceptions such as short tacking along a shoreline, units for the recreational market are next to useless at typical passagemaking speeds due to the short range.

However, there are plenty of use cases in close-quarters slow-speed scenarios, including exploring poorly charted anchorages. This is just as relevant for cruising Greenland or Patagonia as for finding the deepest water over the bars of rivers such as the Rio Dulce in Guatemala or Senegal’s Sine Saloum. In these situations sonar could prove a powerful additional tool, particularly if time is spent on learning how to get the best from the system.

The post Sonar and sounders: 4 new models that are good for more than just fishing appeared first on Yachting World.