After the COVID-19 pandemic has made remote working so widely accepted, could working from your yacht be part of the future? It’s no longer an expensive option: in the past couple of years the price of mobile data has plummeted, with unlimited plans now less than £25 per month.

In the UK, 4G reception around much of the coast is dire and often requires better equipment than in some far-flung parts of the world, but sensibly priced equipment can significantly boost a wifi or 3G/4G mobile signal. Look for products with fully waterproof omni-directional external antennas.

Connecting to marina wifi from a laptop is invariably hit-and-miss. Signals often struggle to get through the forest of masts and many marina WiFi systems suffer from low bandwidth at popular times.

WiFi boosters can therefore be a big help. I’ve regularly used an inexpensive model over a 400m distance with success. A higher specification unit, such as MailaSail’s WiFi Bat, has potential to communicate over a few miles in optimal conditions, yet the antenna is only 59cm tall and weighs less than 700g.

Digital Yacht’s WL510 WiFi Access System has a larger antenna and can either be plugged directly to a laptop’s ethernet port, or used with a router to produce an onboard wifi network for multiple users.

Similar devices can be used to boost a weak mobile phone data signal. Digital Yacht’s 4G Connect Pro (pictured below) has twin external 48cm-high performance antennas, plus a WiFi router. Maximum range is up to around 20 miles from shore, although sheltered river valleys and anchorages under steep cliffs may not have coverage. 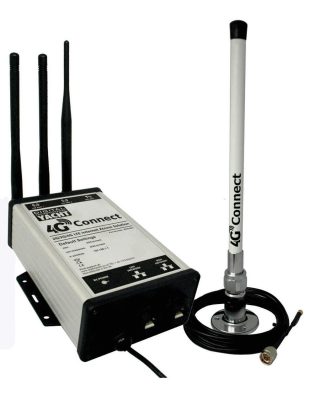 Combined mobile data and wifi devices such as Aquamare’s Pepwave Max BR1-LTE Marine 4G Wifi combine twin 4G antennas with two wifi antennas and a GPS receiver. This type of product makes sense for a multi user ‘fit and forget’ system that maximises the boost to both wifi 3G/4G signals.

At the top end of the scale products combine WiFi, mobile internet and satellite data. This hardware is, however, many times the cost of terrestrial-only systems, while data costs can literally be sky high.

First published in the July 2020 issue of Yachting World.

The post The best 4G and WiFi boosters that mean you can work from your yacht appeared first on Yachting World.