Finally the new crewed lap of the planet, The Ocean Race is set to start this month, with 5 fully-crewed IMOCA 60s on the startline

It’s been a long wait for the next fully crewed lap of the planet since the last one finished in 2018, but finally The Ocean Race will start from Alicante on 15 January. The total fleet is expected to comprise 11 boats in two classes, including the VO65 one-designs from the previous two events and a fleet of five fully crewed IMOCA 60s.

Compared to the previous race around the world under former sponsors Volvo, there have been several key changes. The course now has fewer stopovers and some significantly longer ocean legs. But the most recent alteration is that not all the boats are going all the way round.

While the IMOCA 60s will complete a full lap of the planet, including seven legs to finish in Genoa, Italy, the VO65s will sail just the first and last two legs in what the organisers have called The Ocean Race VO65 Sprint Cup.

A new trophy will be awarded to the VO65 team which accumulates the best score across three legs of the race; Alicante, Spain, to Cape Verde; Aarhus, Denmark, to The Hague, the Netherlands; and The Hague to the overall finish in Genoa, Italy.

The VO65 and IMOCA 60 fleets will both compete in the in-port races scheduled in those cities, although points scored in the in-port racing will only come into play for the overall trophy in the event of a tie-break. 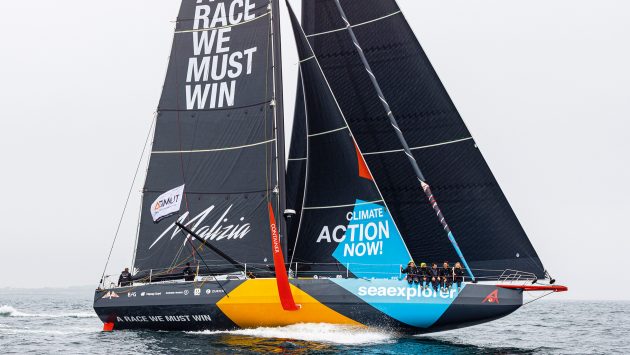 The last two years have been particularly difficult for the organisers of The Ocean Race. Finding a title sponsor has proved elusive, while enticing existing IMOCA 60 teams to consider reconfiguring their boats for a fully crewed round the world race has been challenging.

The biggest hurdle has been the global pandemic and the year long postponement that was required. This not only created a huge level of uncertainty for the organisation and teams alike, but the delay presented a potential clash between The Ocean Race and the single-handed French classic, the Route du Rhum, in which 38 IMOCA 60s took part.

Even with the will to do so, competing in both races was always going to be difficult for teams given the short time frame between the Route du Rhum finish in Guadeloupe and the start of The Ocean Race just a few weeks later. Getting the boat back across the Atlantic and correctly configured for a full crew was seen by many as being ambitious at the least.

However, four of the five-boat fleet, including three of the newest IMOCA 60s – Paul Meilhat’s Biotherm Racing, Boris Herrmann’s Team Malizia and Kevin Escoffier’s Holcim PRB – returned relatively unscathed from the solo transat and headed straight to Alicante to be made ready for their circumnavigation.

The fourth was Benjamin Dutreux and Robert Stanjek’s GUYOT Environment-Team Europe, formerly Hugo Boss from the 2016-17 Vendée Globe Race and therefore more proven, which has helped to shuffle the odds in this fleet.

Previously, having been first in the water and having completed far more sea miles than any of the others, Charlie Enright’s 11th Hour Racing Team was considered the outright favourite. But having not competed in the Route du Rhum means that the boat has not lined up against those that it will face from January onwards in a long offshore race.

The IMOCAs are sailed by a complement of five crew, including an onboard reporter (OBR) that takes no part in the sailing. Each IMOCA 60 team has to include at least one female sailor. 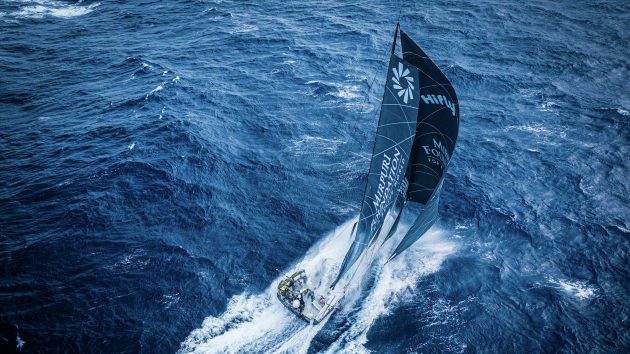 VO65s no longer go for a third lap of the planet. Photo: Robin Christol

Although not delivering the original objective of getting two fleets around the world, the late addition of The Ocean Race VO65 Sprint Cup has provided incentive to teams that had been in the wings for some time but unable to commit to a full circumnavigation. A flurry of activity in recent months has resulted in six teams signing up. 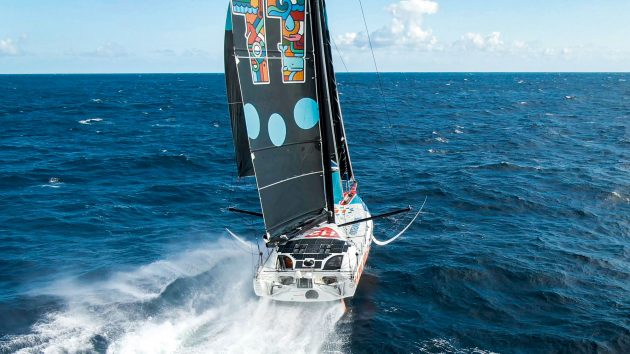 First to sign up and with way more current sea miles under the keel than any of the other teams, 11th Hour Racing Team skippered by Charlie Enright has been the favourite for some time. Designed specifically for this race and with plenty of runway to refine and develop the boat including four transatlantic crossings, this is the best prepared team. The crew line up is impressive too. 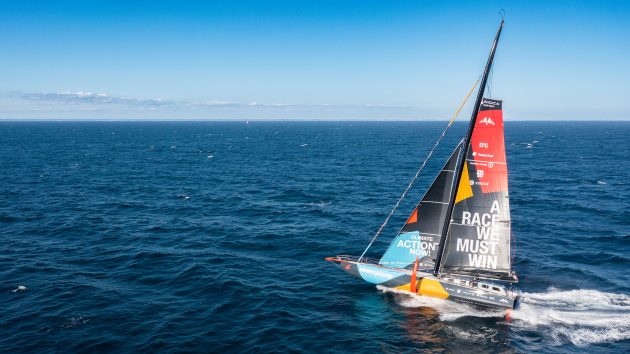 Skippered by Boris Herrmann, who finished 5th in the 2020 Vendée Globe on his first attempt, his team launched their brand new, radical 60 with its distinctive central accommodation area last July.

The boat was designed by VPLP to not only compete in the Ocean Race but also for Herrmann’s 2024 Vendée Globe campaign. Little is known about the true potential of this boat as Herrmann was forced to nurse the boat across the Atlantic after a problem with the mountings for one of the daggerboards. 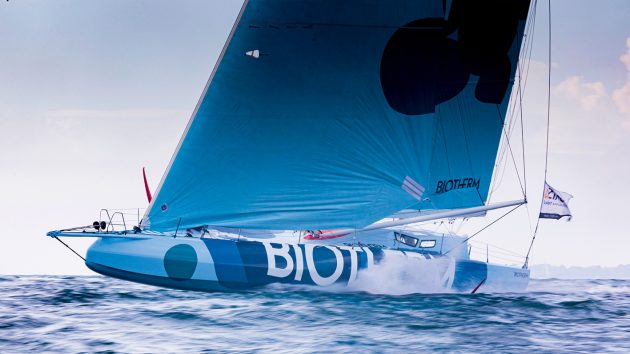 Another brand new boat is Paul Meilhat’s Biotherm Racing, which launched in August 2022. Having co-skippered with Charlie Dalin, Sam Davies and others, Meilhat is fully up to speed with the latest generations of IMOCA 60.

While Meilhat and his crew, which includes Paralympic champion and IMOCA sailor Damien Seguin, have had little time to refine the new Biotherm, they will have gained a great deal of confidence in the boat following Meilhat’s 6th in the Route du Rhum. 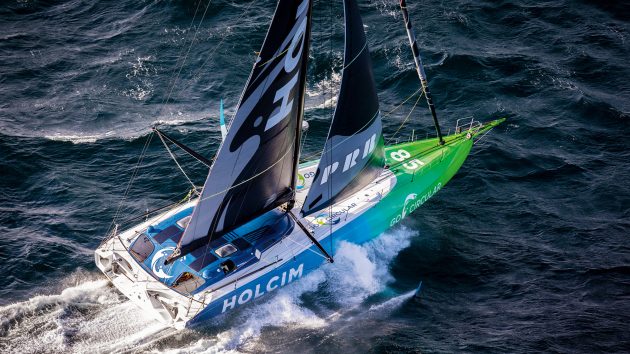 Designed by Guillaume Verdier for an Ocean Race team that fizzled out, Kevin Escoffier’s Holcim PRB is a modified version of the original design that Escoffier will also solo race in the Vendée Globe. Finishing 4th in the Route du Rhum has not only validated the boat’s potential in a very competitive fleet, but has underlined Escoffier’s credentials as a skipper.

Having finished 3rd and 1st in his two previous fully crewed round the world races with Dongfeng, Escoffier also knows how to get to the front in this long-haul competition. 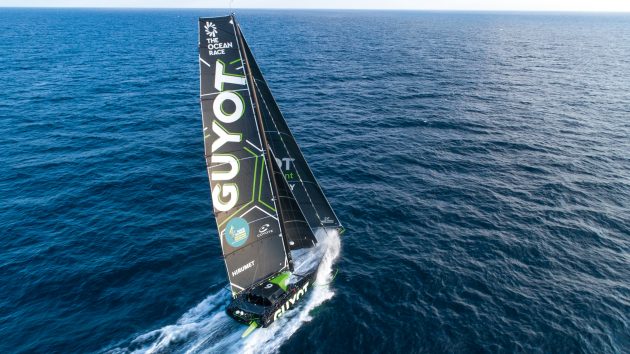 Winning the Ocean Race Europe in 2021 in an older, non-foiling IMOCA 60 provided the catalyst for Robert Stanjek and crew to compete in The Ocean Race.

Co-skippered with Benjamin Dutreux their boat may not be the latest but as the former Hugo Boss it finished 2nd in the 2016-17 Vendée Globe and is widely considered to be both quick and proven.

Ocean Race Europe winners Mirpuri Foundation Racing Team return with an all-Portuguese team skippered by António Fontes who competed as a sailor in the 2017-18 edition of the Volvo.

Dutch Team Jajo is led by 27-year-old Jelmer van Beek with offshore legend Bouwe Bekking as a watch leader, an addition that must surely increase expectations.

Viva Mexico is led by Erik Brockmann – aiming for a Mexican comeback of sorts after Sayula II‘s historic win in the first edition of the race in 1973. 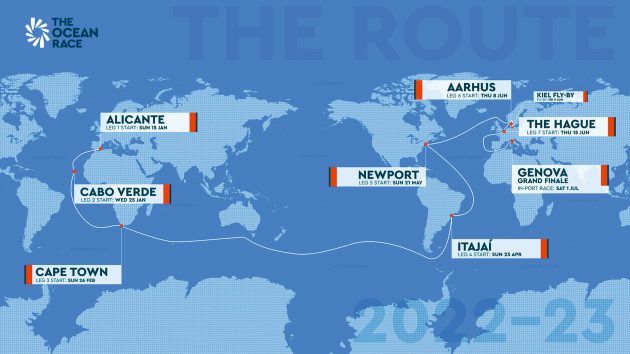 The course for The Ocean Race has a new first stopover mid-Atlantic at the Cape Verdes, before an extra long Southern Ocean leg of 12,750 miles from Cape Town, South Africa, to Itajai, Brazil. This new stage passes south of all three Great Capes and is expected to take 34 days.

After this mammoth Southern Ocean leg, the fleet then moves onto a series of much shorter legs. From Brazil they head to Newport, USA. They then cross the Atlantic to Aarhus, DEN. After that a very short hop from Aarhus to The Hague, NED fore a race from The Hague back to Genova, ITA.

The post The Ocean Race 2023 preview: What’s in store for the new race appeared first on Yachting World.