Can you tackle a northerly Atlantic crossing – the legendary ‘Viking’ route – in a standard bluewater cruiser? Sam Fortescue meets an owner who did just that

Think of crossing the Atlantic from west to east, and most people will picture a pleasant high-pressure route via Bermuda or the Azores. But there is another way of doing it. One that cocks a snook at the rhumbline and flies in the face of the usual assumptions about what constitutes ideal weather. Promisingly, it is known as the Viking Route, so named after the Norse explorers who voyaged as far as Nova Scotia a thousand years ago.

Put simply, to follow the Viking route takes you from the east coast of the US, across the top of the planet via Newfoundland, Greenland and Iceland, back down to Europe via the Faroe Islands.

Besides the wild and little-visited isles along the route, its chief attraction is how this option breaks the transatlantic ocean passage down into smaller, bite-sized chunks. 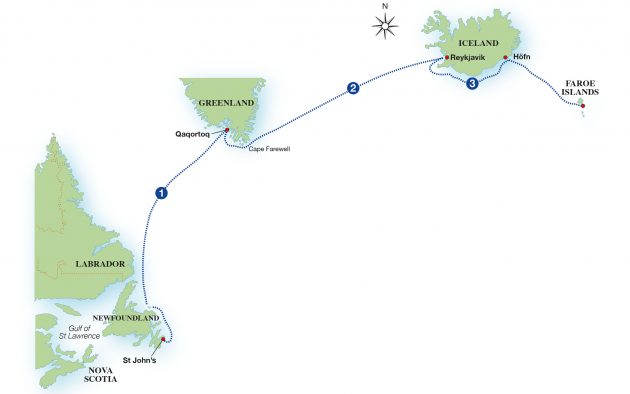 When Alberto Duhau looked into the route to take his Hylas 63 Shaima from Florida to the Mediterranean, he quickly realised that there’d be no more than six days at sea between landfalls.

Preparing for the Viking route

After consulting weather experts, ice pilots, and Hylas themselves, Duhau also saw that his boat would need relatively little in the way of modification to tackle these higher latitudes. Not for nothing is this called the Viking route, and if they could do it in longships built of green oak with iron rivets and square sails made of wool, a modern high-spec glassfibre cruiser should have no problems.

This is the story of how Alberto Duhau followed in the wake of the Vikings. 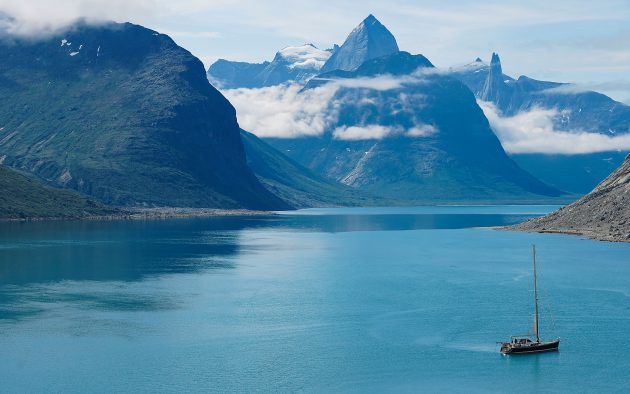 Shaima’s voyage began in Florida, but Duhau and his ever-changing crew of friends and family took the whole US east coast in a single hop, making their first stops along the coast of Nova Scotia. There are plenty of well-protected anchorages here, and Duhau recalls it as an early highlight of the trip. 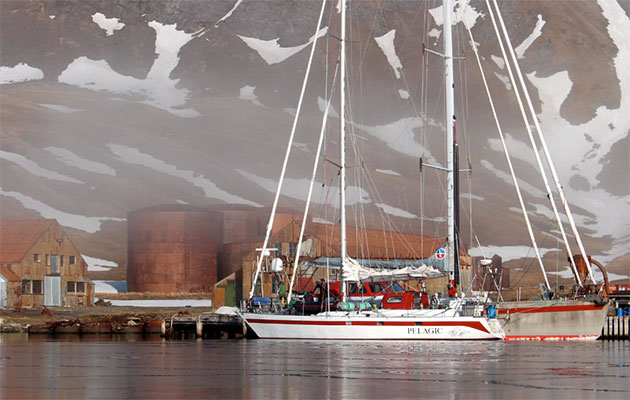 Although we are in the business of providing uncertainty as one of the mainstays of the Pelagic experience, there are… 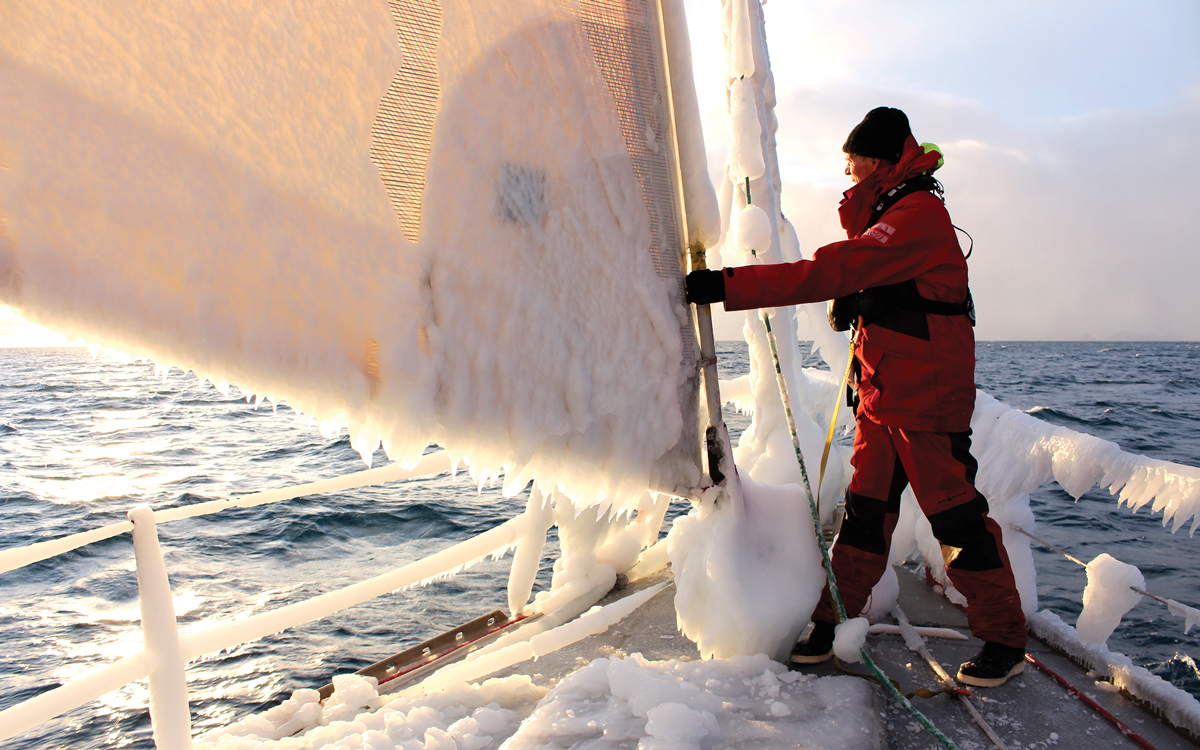 “We saw large amounts of humpback and pilot wales in the Gulf of Saint Lawrence and a few icebergs along the Newfoundland coast,” he says.

“Small coastal villages of this part of Canada start to have the flavour of the Scandinavian towns that dot the landscape for the rest of the trip.”

The planned departure from St John’s was delayed because of gales off Greenland’s southernmost tip, Cape Farewell, but that gave them a chance to explore Fogo island to the north.

Fogo is a beautiful and little-visited spot, but it also put them some 100 miles further into the ice-strewn Labrador Strait for the passage north to Qaqortoq. In the end, they completed the 700 miles in just four and a half days with a stiff southerly wind veering west.

“Fog was common and the need to watch out for icebergs, growlers and bergie bits was around the clock,” says Duhau.

“Sometimes we could scout for icebergs from the warmth of our cockpit enclosure, but often we had to stand watch unprotected from the side deck while engulfed by a 4°C breeze and spray.”

From Qaqortoq, Shaima headed off south-east with a plan to explore the fjords and glaciers. There, Duhau found true wilderness. “We hiked, kayaked, did some rather risky iceberg climbing and fly-fished for Arctic char with amazing results in beautiful streams and rivers,” he says. 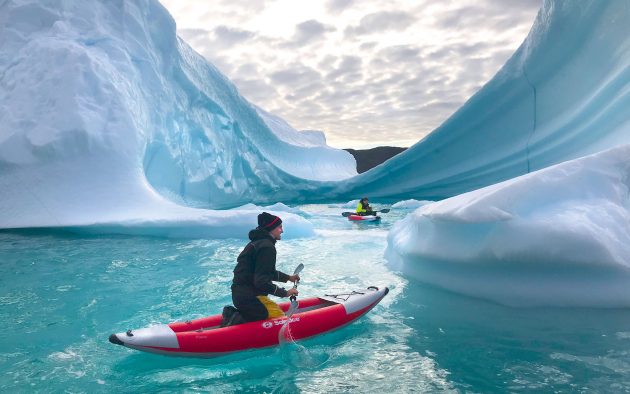 The highlight of this part of the cruise was transiting the 57-mile-long Prince Christian Sound, which cuts through the bottom fringe of Greenland. “It is surrounded on both sides by steep granite mountain walls and valleys. Twelve icecap glaciers calve into the Sound, and countless waterfalls feed the fjord with fresh water.”

At 660 miles, the crossing to Reykjavik was even quicker, taking just four days. For this passage, seas and winds were gentle, and there was little need to scout for ice. Duhau’s initial plan to go northabout the island had to be abandoned because of time lost as they waited for an issue with their Yanmar engine to be fixed.

Iceland lacked a single mechanic capable of dealing with modern common-rail injection engines, so there was a delay until someone was sent out from Europe. It turned out that just two wires in a cable harness had parted.

In the meantime, the crew explored Iceland’s natural wonders by land, before hopping along the south coast. “[There are] few anchorages but extremely beautiful,” notes Duhau. Conditions were good and the crew enjoyed amazing views of active volcanoes. Then, from the protected natural harbour of Höfn, they turned south-east towards the Faroe Islands. It took less than 48 hours to reach Torshavn, the capital of this remote island group.

From there it was more or less downhill all the way. Shaima encountered headwinds on the run south to Inverness, but revelled in the Caledonian Canal transit and the whisky harbours of the Western Isles.

Then it was on to Belfast, Dublin, Galicia and round the Iberian Peninsula to Valencia, where Shaima got stuck in for the winter.

“The route up north is just so isolated, so pristine, it touches your heart,” says Duhau.

“Sailing in high latitudes is not difficult if done prudently, during the height of the summer and in areas free of sea ice but with icebergs. You do not need an expedition boat to do this, just a seaworthy ocean vessel and a competent crew. 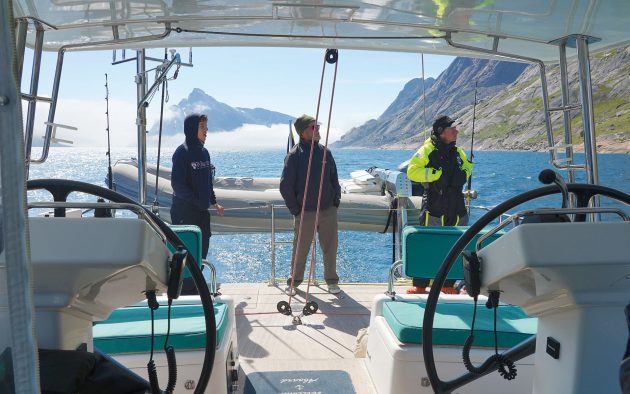 “Island-hopping across the Atlantic is a very feasible project and a great way to spend the first summer of a cruise to the Med, or alternatively, to return to Europe from the Americas,” he adds.

“It is an excellent alternative to the typical Bermuda-Azores ocean crossing and avoids the 15 to 20 days of continuous ocean sailing.”

The three-month passage across the top of the Atlantic Ocean made such a lasting impression on Duhau that he is now considering other high latitude adventures. He is developing an idea to follow Captain Cook’s path from the south Pacific down the Chilean coast to Antarctica, round Cape Horn and across to Cape Town. 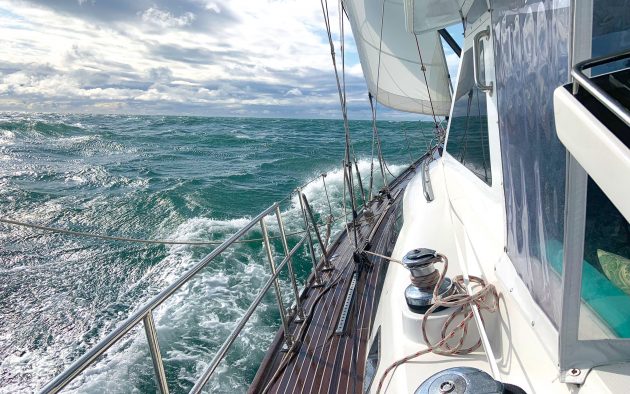 “We will sail 18,000 miles in 10 months, stretching the sailing season as much as possible yet visiting the very best of Southern Ocean high latitude destinations in only one season,” he explains.

“That avoids the worst weathers, by being in the right places at the right times, albeit we will definitely experience some late spring and summer lows and gales – something that adds to the overall experience. Our visit south will be short, varied and sweet!”

A suitable vessel for the Viking route

Hylas is a Taiwan-based shipyard with a reputation for building luxurious cruising yachts with a high degree of customisation. The customisation options were something that Alberto Duhau took thoroughly to heart after he signed the contract for a new 63-footer back in 2014.

“I became heavily involved in fine-tuning the design and equipment options, with the overall goal of transforming Shaima into my ideal global explorer yacht,” he explains.

“Together with my daughter, Stephie, we redid the Autocad drawings of the interior as well as designing major exterior structures.”

The pair custom-designed a hard dodger made of carbon fibre and high-impact glass, combined with a light but sturdy, aluminium/glassfibre hard top. The hard-top runs to 6m length, and extends cover from the companionway to the helm stations aft.

Roll-up curtains at the side allow the cockpit to be totally enclosed while underway, and a blower can even send hot air from the engine into the cockpit enclosure. 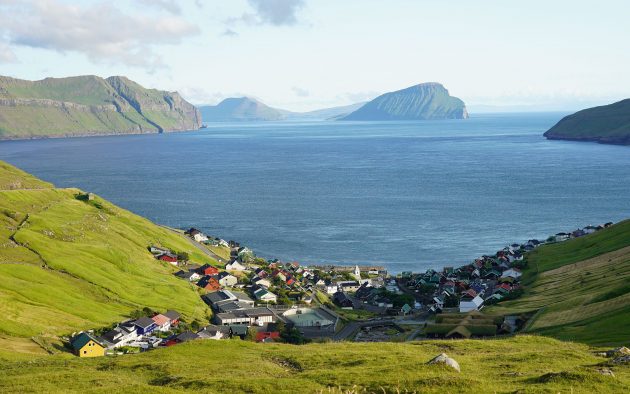 On warm days, the gap between the hard top and dodger opens, bringing a pleasant air flow into the cockpit. There is full aircon below, as well as electric heating running off the genset. “We purposefully avoided a fuel-based heater that would require new ducts and has other drawbacks,” explains Duhau. No extra hull insulation was required besides the Hylas’s foam-cored Twaron-fibreglass lay-up.

Shaima was always spec’d for adventurous sailing, carrying a Spade 240 stainless steel anchor weighing 82kg that is rated for 98ft boats. “It hooks anywhere, always resets and is the best sleeping pill on board!” says Duhau.

He specified 120m of 7/16in chain, for anchoring comfortably in up to 30m, and a 1in diameter bridle to hook onto the main anchor chain, with port and starboard tails that are 10m long.

A powerful 1,200W Maxwell RC12 windlass raises all this ground tackle, while Shaima also has 4 x 100m Spectra shorelines that are so light and easy to handle that they don’t require spools.

Duhau purchased a 15ft RIB with an aluminium hull (the AB ALX15). Fitted with a 40hp Yamaha outboard, it is sturdy but light and capable of planing with eight people aboard.

After the engine broke, Shaima was towed in to Reykjavik on huge cables behind a 250ft cutter. “If only I had known then that I could have towed Shaima with the dinghy at 5 knots, so easily!” says Duhau.

The tender is deployed on hydraulic davits by Cooney Marine, for which the transom of Shaima had to be fully reinforced. Aluminium struts were installed below the deck and the GRP of the deck itself was thickened to 9cm under the davit feet. This means the tender can be readily launched in a sea. 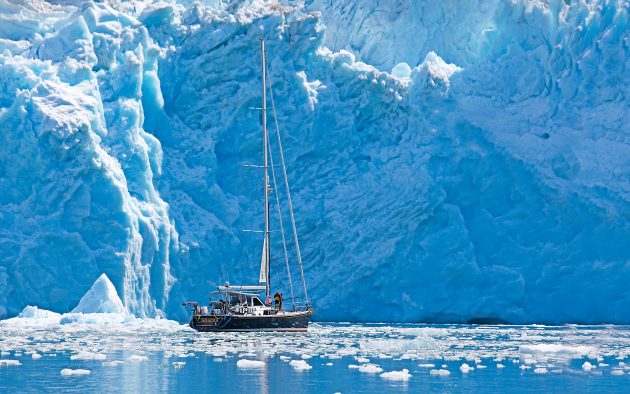 Despite the ice, the Viking route can still be tackled in a standard bluewater cruiser. Photo: Alberto Duhau

Additional safety modifications that were added include extending the 3ft-high stainless steel pushpit railing to the middle of the boat. Twin six-man liferafts were fixed to the pushpit for quick deployment. The davits also have strong inch-thick stainless steel plates for deploying a 110m Jordan series drogue, tying spring lines aft and towing anything in an emergency.

The Hylas 63 has 2,460 litres of fuel tankage aboard – enough for 12 days of continuous motoring at cruising speed, or 18 days at a slightly slower pace. Duhau added 1.8kW of solar panels, which can cut generator use for battery charging by 40%.

Two large Vitrifrigo freezers and two large fridges provided ample stowage for fresh food for the crossing, and there is a 100lt/hr Schenker watermaker in addition to 1,450 litres of water tankage.

Duhau replaced the standard cutless bearing/stuffing box setup of the rudder shaft with self-aligning Jefa synthetic bearings. At the same time, he had the hull around the shaft reinforced, as well as the bulkhead and adjacent support structures. It was an expensive job. 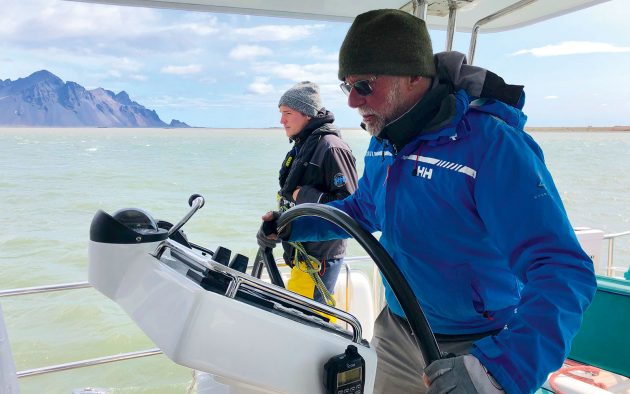 The rig was set-up for short-handed sailing. “I wanted the rig to be ideal for long-range cruising, offering control without exiting the cockpit,” Duhau explains.

Shaima flies a genoa and staysail on hydraulic Furlex furlers, has in-mast furling and a hydraulic outhaul, a hydraulic backstay and boom vang, an easily handled whisker pole for setting the genoa to windward, and a cruising gennaker that can be carried from 80° apparent to dead downwind.

Duhau also set up in-cockpit controls for the anchor windlass, as well as bow and stern-thrusters. A separate track was installed on the mast so that a storm trysail could be set without having to remove the mainsail first.

The post The Viking route: Across the Atlantic via Nova Scotia appeared first on Yachting World.