A day of good breeze, but huge waves made for a hectic day four of the Olympic Sailing competition for Tokyo 2020, with the British team having the best of it. Andy Rice reports.

Enoshima is famous, notorious even, for its big wave action, and that’s what the sailors got on day four of the Tokyo 2020 Olympic Sailing Competition.

Eight out of ten fleets were racing on Wednesday, with only the Laser and Laser Radial having a rest day. Some Olympic sailing competitors put down some big markers with dominant performances in the 470 Women and Nacra 17.

In the Men’s and Women’s Skiff events, both halves of an engaged couple are sharing the limelight in their respective boats, Dylan Fletcher (GBR) taking the lead in the 49er and his fiancée Charlotte Dobson (GBR) maintaining top spot in the 49erFX.

Alongside the big waves across Sagami Bay, the sailors thrived in 14-17 knots of consistent south westerly breeze that gave them a stern test. 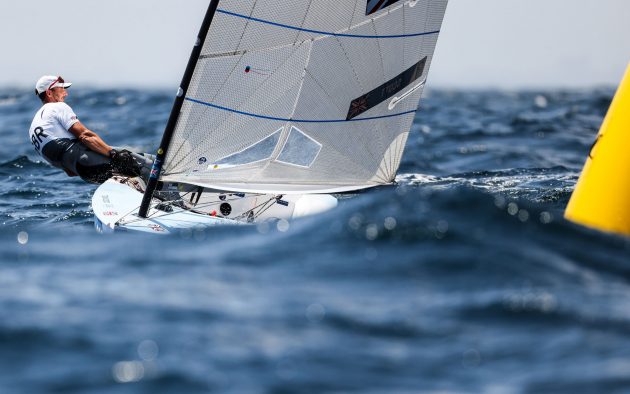 Points are tight after four Finn races, but Alican Kaynar (TUR) is doing just enough to stay in the lead after his spectacular opening day.

Now, though, the Turk is on equal points with the Hungarian, Zsombor Berecz, in second place.

Just a point off the joint-leaders is 23-year-old Joan Cardona, the Spaniard continuing to prove that he can hold his own against the seniors on the biggest stage. 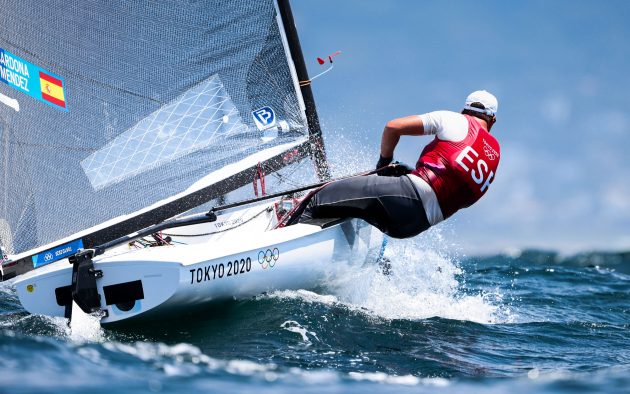 The day belonged to defending Olympic sailing Champion, Giles Scott, however, with the Briton winning both races and revelling in the big waves. After a slow start to the regatta, Scott’s double-bullet day puts him just three points off the lead. He’s known for being able to work the waves perhaps better than anyone.

Scott commented, “[Wind] pressure was super strategic today and there were really nice waves to surf. So you find a bit of pressure and get it, get a few good waves, you can extend away. But in this heat, there’s a little bit of energy maintenance needed too, to make sure you have something in the tank for upwind.”

Scott was relieved to have overcome a difficult first day. “It was a shaky start, but I’ve got a bit of a history of shaky starts so let’s hope I continue more like today.” 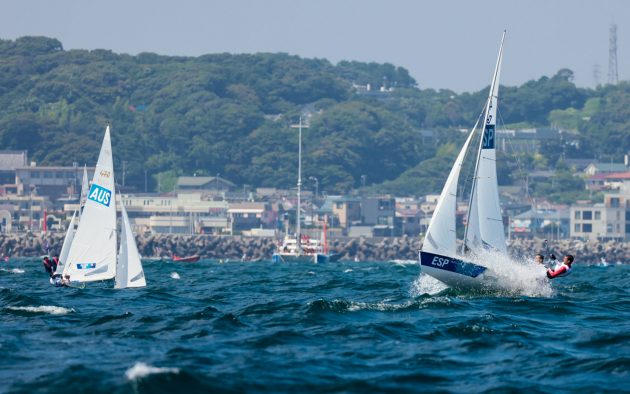 Reigning World Champions Anton Dahlberg and Fredrik Bergstrom won the opening race of the Men’s 470 competition in 16 knots of wind and big waves.

However, the Swedes got in a mess on the first leg of race two, forced to take penalty turns and pushed back in the fleet, leaving them with a 15th place at the finish.

More consistent were the Olympic sailing silver medallists from Rio 2016, Mat Belcher and Will Ryan (AUS) who hold a one point lead after two races, just in front of this year’s European Champions, Paul Snow-Hansen and Daniel Willcox (NZL).

The next five boats are all on 11 points, three points off second, and they are Spain, Great Britain, Japan, France and Greece.

Jordi Xammar and Nico Rodriguez (ESP) had a slow start to their regatta with a tenth place but made amends with a commanding race win in the second race.

Xammar was unworried by the poor first race. “Winning the second race, I think we showed ourselves that we can come back from bad situations. Perhaps we were a bit hasty with our first decisions, but this is something normal for a big event like the Games.

“I have discussed this with my psychologist. We did not worry. It is normal, because the first day is always more complicated. The goal was to get through the first day safely. We are ready and we have a brutal desire to perform well.” 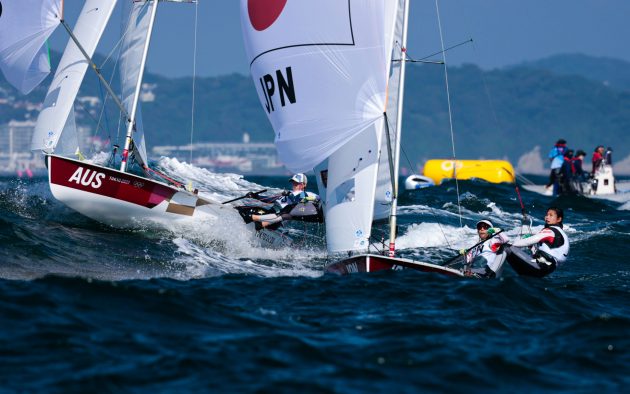 Very big waves were the order of the day on day four of the Olympic sailing competition in Tokyo. Photo: Sailing Energy / World Sailing

It’s not like Agnieszka Skrzypulec and Jolanta Ogar are unknown in the Olympic sailing 470 fleet, but the Polish team were not expected to win both races on day one of the 470 Women’s competition. Poland hit the afterburners to run away with the overall lead ahead of a couple of the favourites. 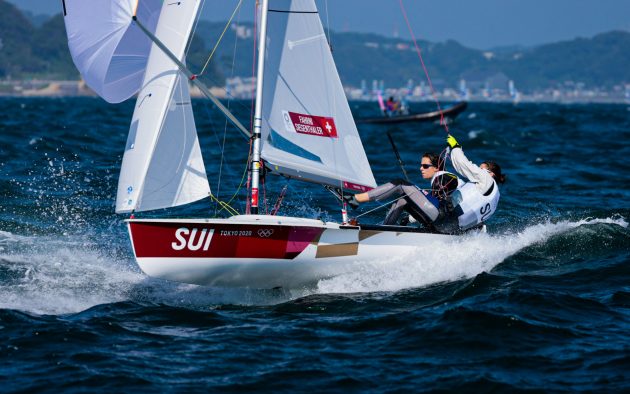 The waves on all courses made for a tricky day. Photo: Sailing Energy / World Sailing

Even at her third Games, Mills confessed to having butterflies in her stomach. “I think I was really nervous today. The first day is always the worst. Just waiting and waiting and waiting and you just want to start the sailing. There was just an anticipation to get going,” said the defending Olympic Champion, who enjoyed the racing. “We were expecting more wind than we got, but the waves are still pretty big. For a first day, it was just phenomenal conditions. It’s what we remember about sailing in Japan, and it’s amazing.”

Great Britain’s Dylan Fletcher and Stu Bithell improved throughout the day, winning the last race and moving into the overall lead of the Men’s Skiff – 49er fleet.

It was the Spanish who had the best day in the gnarly waves, with scores of 1,2,5 putting Diego Botin and Iago Marra (ESP) just a point behind the British. 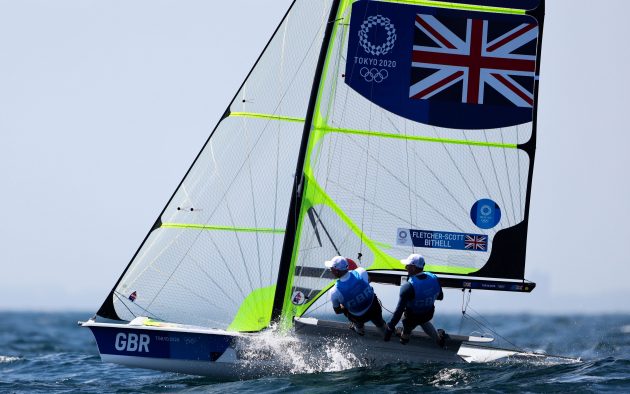 In third place are the Australian brothers, Will and Sam Phillips, who are known for coming on strong in the strong breeze. On the same points in fourth place are Bart Lambriex and Pim Van Vugt (NED), with two 49er Olympic sailing Champions in fifth and sixth overall.

The 2016 gold medallists Pete Burling and Blair Tuke are fifth, a point ahead of 2008 gold medallist Jonas Warrer and his crew, 20 years his junior, Jakob Precht Jensen.

Stu Bithell was impressed by the steadiness of his helmsman in the big conditions, “Dylan was very good actually, not as twitchy as he can be! Nice smooth gybes, and really good in the last race. We grabbed the bull by the horns, won the starboard end and managed to dominate the race from there.” 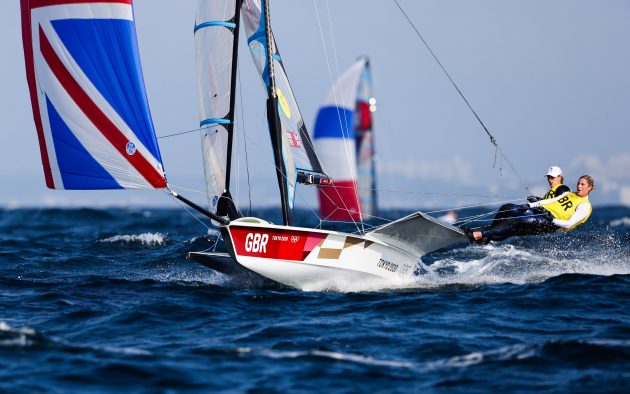 Charlotte Dobson and Saskia Tidey (GBR) may not have won a race in the big waves today, but 4,2,5 scores keeps the British in the lead by five points from the Dutch, who had the best results from the outing.

Double World Champions Annemiek Bekkering and Annette Duetz (NED) notched up two race wins and a sixth, looking very comfortable in the difficult conditions. Two points behind them are the reigning World Champions from Spain, Tamara Echegoyen and Paula Barcelo. 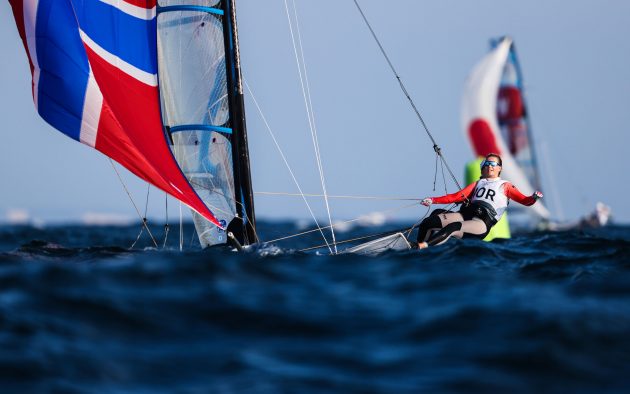 Bekkering admitted controlling the women’s Olympic sailing skiff in those waves is constant stress, “You can’t push the boat to 100%, otherwise you capsize, so it’s quite stressful concentrating so hard, but the stress is enjoyable too. It’s part of what makes sailing these boats so fun.” 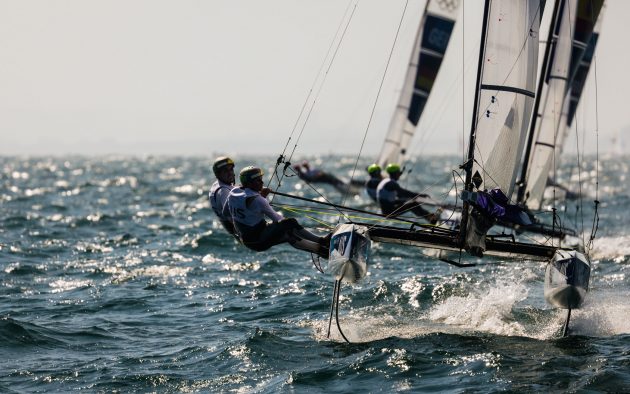 Ruggero Tita and Caterina Banti made a big statement on the opening day of the Olympic sailing Mixed Multihull – Nacra 17 racing, winning two races and coming third in the other. The Italians have always been fast downwind, especially in big waves that can bite without warning.

If it was not for misjudging their approach to the finish line of the third race and letting two boats slip past, Santiago Lange and Cecilia Carranza (ARG) would be sitting in second place overall, but the defending Olympic Champions are in fifth.

Instead, it’s the young German team of Paul Kohlhoff and Alica Stuhlemmer who hold second spot, on equal points with Jason Waterhouse and Lisa Darmanin of Australia. Places second to sixth are separated by a single point, so this competition looks set to be very open and competitive all the way to the Medal Race.

As for the opening day of racing, “It was a lot of pressure. Three laps for us – it’s not our sweet game, but we managed to perform well. We’ve got the speed, so we’ll see what we can do this week.” 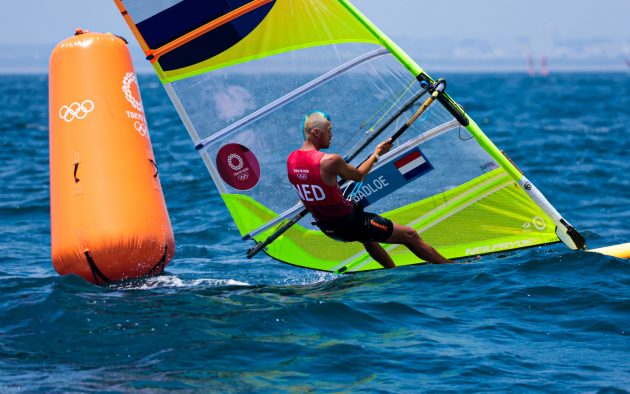 Kiran Badloe shot back into the lead, looking very comfortable in the stronger breeze. Scores of 2,4,1 put the Dutchman eight points ahead of second placed Mattia Camboni, the Italian who had held the lead before today’s racing. France’s Thomas Goyard is in third place, five points adrift of Camboni.

The biggest mover of the day was Kun Bi, the tall Chinese sailor revelling in the big wind, big wave conditions with results of 1,3,2. Another windy day like that and China could be challenging for the podium.

Badloe is keeping in touch online with his friend Dorian van Rijsselberghe, the double Olympic Champion whom he beat to Dutch selection. “We have a little chat every now and again, so that’s good. He’s given me a couple of pointers. Stay calm. Do your thing. And he just reassures me that if I just do what I do, the end will be alright.” 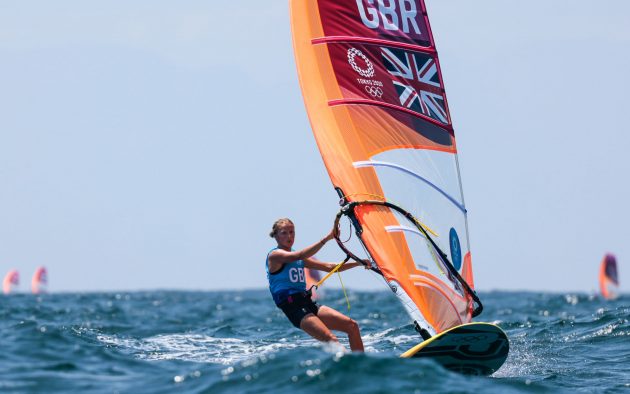 Britain’s Emma Wilson leads the field in the Women’s windsurfer (RS:X) despite being over the startline in one of today’s races. Photo: Sailing Energy / World Sailing

Emma Wilson (GBR) won the first two races of the day to move into the lead of the RS:X Women’s fleet. Although a U-flag disqualification for breaking the line too soon in the final race was not the ideal end to the outing, the British windsurfer was very upbeat about her performance.

Winning the last race of the session put Yunxiu Lu just one point off the lead, the Chinese sailor looking very strong in the wind and the waves.

Although the defending Olympic Champion Charline Picon didn’t win any races, the Frenchwoman remains very consistent and only three points off the lead. The top three have formed a breakaway on the rest of the fleet, and it’s 14 points further back to Italy’s Marta Maggetti.

The chasing sailors need a really good day on Thursday to threaten Great Britain, China and France for the medals.

“It was a very hard battle with Emma [Wilson] and Yunxiu [Lu], they both had very good races,” commented Picon, “but they also had one bad one, so the situation between us is very interesting. They had a better day than me but I still had a good one so we are in a good battle.”

The 49erFX are the only fleet who will enjoy a rest day on Thursday with the 49er scheduled for two races to catch up on those lost during Tuesday’s action.

Racing will start at 12:00 JST and every fleet will start to enter the business end of the competition with races now coming thick and fast.