The men’s and women’s windsurfer Olympic sailing fleets now only have a top-ten Medal Race to complete, with some sailors already guaranteed a medal

The first medals are all but guaranteed at the Tokyo 2020 Olympic Sailing Competition as Dutch windsurfer Kiran Badloe (NED) put one hand on the Men’s Windsurfer – RS:X gold medal on day five of the regatta in Enoshima.

Ahead of the Men’s RS:X Medal Race on Saturday, Badloe has a significant advantage in the men’s fleet and in the women’s, the Chinese, British and French sailors are certain of a medal each.

It was another day of good breeze in Enoshima, not quite as strong as day four of the Olympic Sailing competition but sufficient for the trapeze sailors to be fully stretched and planing downwind. Some sailors scored double wins in their races, while for others today was the moment when their hopes of a medal in Tokyo flickered away. 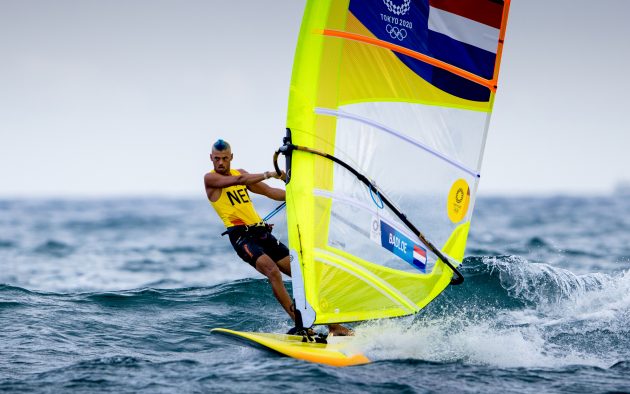 Kiran Badloe (NED) has a lead of 19 points ahead of the Medal Race and just has to finish Saturday’s Medal Race, avoiding disqualification, to secure gold.

With a fifth in the first race of the day, the Dutchman bulleted the next races, and as he crossed the line he started to celebrate with his coach Aaron McIntosh, winner of a windsurfing bronze medal for New Zealand back in Sydney 2000.

“This is this the highlight of my career so far,” said the man with the blue arrow shaved into his hair. “I’ve won the last three world championships, but there is always something special about that Olympics. We had a tough selection criteria, battling with Dorian [van Rijsselberghe, the 2012 and 2016 Olympic Champion]. This is the cherry on the cake, it’s very special.”

Saturday’s Medal Race for bronze and silver is going to be intense. A race win and a good all-round day for Thomas Goyard puts the Frenchman in second overall, but only two points ahead of Mattia Camboni of Italy, with Poland’s Piotr Myszka also in close contention. 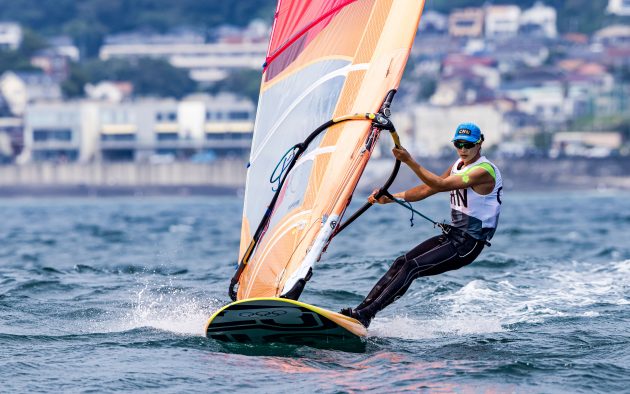 The top three athletes in the RS:X Women have broken away from the rest of the pack sufficiently to know that they’ve won a medal. Now it’s a question of which colour. China’s Yunxiu Lu started the regatta stutteringly but has got better and better. Today’s scores of 2,3,2 have put China in the lead with a four-point margin over Great Britain’s Emma Wilson. Just two points behind her is Charline Picon from France.

With China holding a minor points advantage, Picon might have been tempted to focus on the battle with Britain for silver. Not a chance of it. “Six points to the lead? No, I’m going for the gold,” said the reigning Olympic Champion. 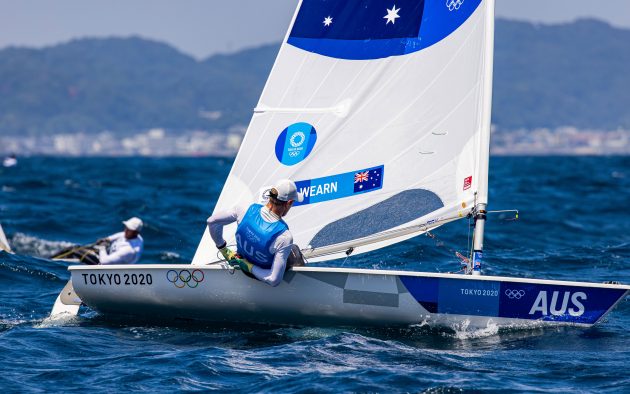 Matt Wearn (AUS) keeps on getting better and better throughout this Olympic sailing regatta. With opening scores on day one of 17,28, it looked like the Australian was not going to live up to his billing as one of the favourites for gold. But since the wind turned to the south and got stronger, so the waves got bigger, and the change of conditions have played to Wearn’s strengths, winning both of today’s races.

“Coming back from the first day was tough mentally more than anything,” said Wearn. “You expect to have a great start to the regatta. And obviously that didn’t happen. So it was sort of back to the drawing board. And it was a little bit more frustrating that one of those results was because of a breakage as well. Obviously, that’s the last thing you want happening in the Olympics. But it’s been a couple of good days now, still another three races to go though.”

Pavlos Kontides (CYP) went into the day with an eight-point lead. He might still have been leading but for a ‘second yellow flag’, the dreaded penalty flag used by the on-water umpires who watch out for any infringements of Racing Rule 42, kinetics (pumping and rocking). The Cypriot was very unhappy with the decision against him. “I don’t want to discuss it or how I feel. I will just try to forget about everything and just focus on tomorrow.”

With two races to sail on Friday before the Medal Race, Wearn holds a 15 point advantage over Kontides, who’s now only five points in front of third-placed Hermann Tomasgaard of Norway.

Waiting to pounce on any mistake in fourth place overall is 48-year-old Robert Scheidt, the five-time medallist from Brazil. 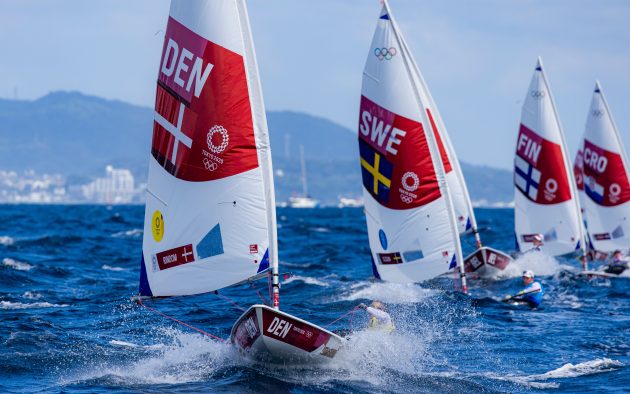 Anne-Marie Rindom (DEN) was more excited at the performance of her good friend Annalise Murphy (IRL) who rediscovered her mojo in today’s full-hiking, wavy conditions, than in her own solid results which see her leading the fleet.

In Rio, Rindom took Olympic bronze behind the Irish sailor’s silver and today they each came off the water with a first and a second place, Murphy taking the first race and Rindom the next.

“I’m so happy for her because we have been training together now for the last eight years,” grinned Rindom. “And I remember in Rio, we were jumping in the water together finishing second and third. She just needs those days like today. She’s such a brilliant sailor. I am so happy for her.”

The gold medallist from Rio, Marit Bouwmeester (NED), has mounted a courageous comeback all week after a shaky start to the regatta. The Dutch double Olympic medallist has sailed with her back against the wall, but blew any realistic chances of the gold after a black flag disqualification for starting too soon in race 7. Now back in seventh, she has an outside chance of getting back to silver or bronze.

“Well, at least I don’t have to look at the scoreboard anymore,” said Bouwmeester, struggling to face up to her disappointment. “I guess my back’s against the wall but I have to make the most of tomorrow.”

Rindom needs to sail sensibly to preserve a whopping 21 point advantage over Tuula Tenkanen, the Finnish sailor who leads a bunch of rivals on very similar points. 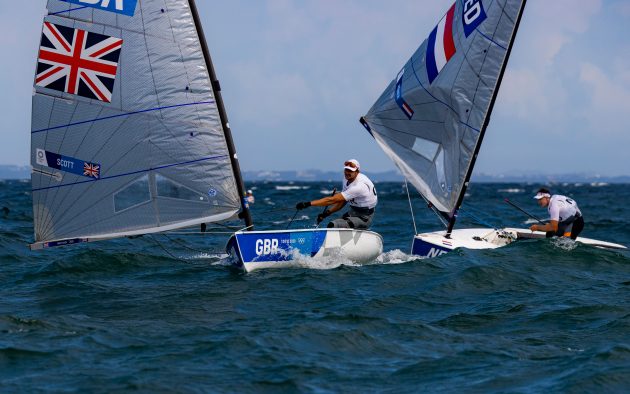 A second consecutive day of double bullets puts Giles Scott (GBR) at the head of the Finn fleet. In case you had any ideas that the defending Olympic Champion is running away with it, he’s not. The 23-year-old Spaniard Joan Cardona is keeping Scott honest with some good scores of his own, and sits just a point behind. Best of the rest is Hungary’s Zsombor Berecz, who is seven points off second place and has the Netherlands and Argentina breathing down his neck.

But it cannot be denied that the British sailor, so long the Olympic understudy to Sir Ben Ainslie has shown his class in the second and third day of the Olympic sailing regatta. Scott might be a little race-rusty having only recently got back into the Finn following his work as tactician on Ainslie’s INOES Team GB America’s Cup team, but he has lost none of the talent that has seen him such a dominant force in the class over the last couple of Olympic sailing cycles.

Asked if it was easy today, Scott said it was anything but that on Enoshima Course, the inshore course where the Medal Races will be contested in the coming days. “Easy! I’m not sure about that. I mean, the conditions on Enoshima Course – it’s a washing machine. It’s a great, great race course and a bit of a shame there’s not that many spectators around.” 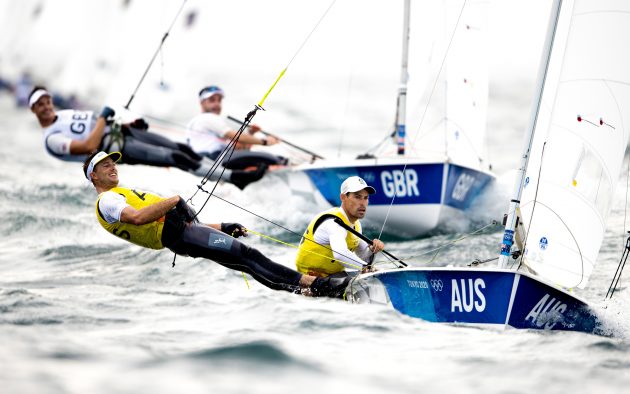 Two wins from two races puts Mat Belcher and Will Ryan (AUS) further ahead in the 470 Men after four races completed. Belcher has won five of his eight world titles with Ryan and will miss sailing with him once the partnership ends with the conclusion of these Games.

“We’re really just enjoying the racing,” commented Belcher. “You know, the reality is in less than a week, the partnership’s got to finish because of the changes for the next Games.”

Up to second overall are Luke Patience and Chris Grube (GBR). Interestingly Belcher won gold at London 2012 and Patience took silver, and here they are again nine years later, albeit both with different crews from their London showdown. Not that this is a match race.

There is plenty of runway remaining and just a few points behind the British is a whole bunch of high-quality boats led by third placed reigning World Champions, the Swedish team of Anton Dahlberg and Fredrik Bergstrom. 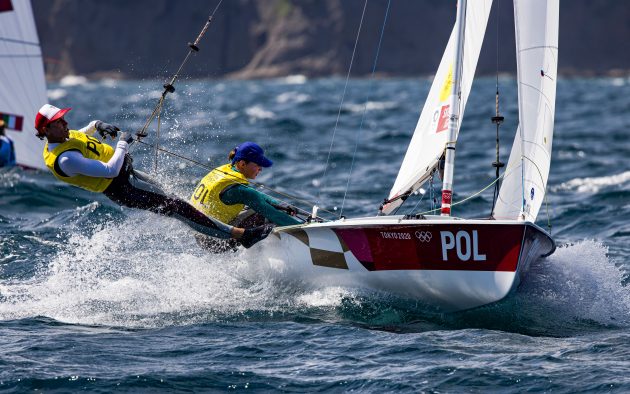 It wasn’t quite as barnstorming as their two bullets on day one, but it’s still pole position for Agnieszka Skrzypulec and Jolanta Ogar (POL) after results of 2,5 – the most consistent set of scores from a hard-to-read day.

Ogar enjoys the physical challenge of working the 470 through the waves, operating at near max heart rate. “It’s really crazy. It’s physical, it’s endurance. But also I think Olympic sailing should go in this direction to be more spectacular. I love it.”

The Brazilians, Fernanda Oliveira and Ana Barbachan, grabbed the early headlines with a race win but followed with a tenth. The British, Hannah Mills and Eilidh McIntyre, started with a seventh but followed up with a runaway win in race four, taking the victory by most of the final high-speed reaching leg to the finish. 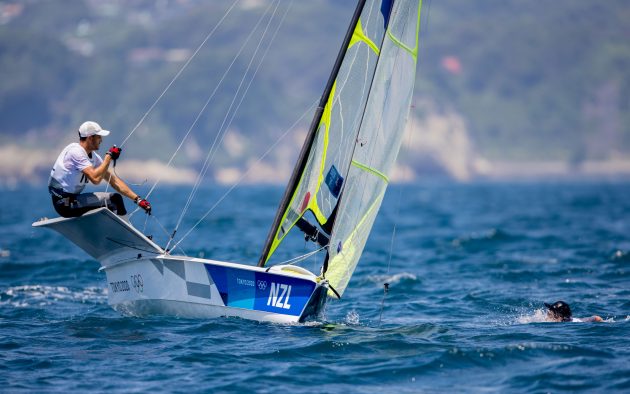 The best performers of the two-race session in the 49er were the Danish duo of Jonas Warrer and Jakob Precht Jensen. A port-tack start off the committee boat end of the start line launched Warrer towards the right-hand side where he saw more breeze and that led to a race win, followed by fifth in the next. The Danes move up to third place behind two teams sharing equal points at the top – Great Britain and Spain.

Dylan Fletcher (GBR) was feeling like the Spanish team of Diego Botin and Iago Marra (ESP) were paying him a bit too much attention. “They kept on tacking on us,” said the British helm racing with crew Stu Bithell. “But I suppose that means there’s a compliment there.”

Marra denied that they were paying any special attention to the British, saying it was too early to be focusing on any one team.

Peter Burling and Blair Tuke were looking well placed in the first race of the day, sitting in second at the top end of the first leg when Burling missed his trapeze handle through the tack and fell overboard. Salvaging a 12th from that race plus a second in the next puts the defending Olympic Champions in fourth overall and well in the hunt for the medals at the halfway stage. 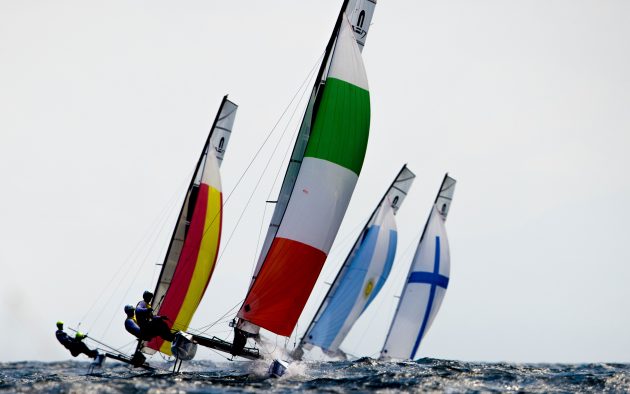 Italians Ruggero Tita and Caterina Banti have been the standout performers in the Nacra 17 this Olympic cycle and regatta so far. Photo: Sailing Energy / World Sailing

John Gimson and Anna Burnet (GBR) rode their Nacra 17 hard in Sagami Bay to notch up two bullets and a second place. This puts the British into second overall, closing the gap to the Italians Ruggero Tita and Caterina Banti who continue to lead after solid results of 2,5,1.

The top ten in the Men’s and Women’s Windsurfer – RS:X will enjoy a day of rest on Friday ahead of their Medal Races on Saturday 31 July.