The world’s biggest offshore yacht race, the Rolex Fastnet Race, started today. Competitors can expect a tough first night after setting off from Cowes in demanding conditions which saw some big names forced out of the race early on.

White-capped waves, a building swell, and gusty breezes saw the world’s biggest offshore yacht race, the Rolex Fastnet Race, start this morning from Cowes, on the Isle of Wight, in demanding conditions.

Winds across the Solent were steady 25 knot south-westerlies, gusting into the mid 30s, as the 337-boat fleet started from the Royal Yacht Squadron line.

The large racing fleet and spectator flotilla churned up an already confused sea state off Cowes, and as the fleet powered west towards the tidal overfalls off Hurst Narrows that sea state only increased to 1m plus waves.

The tricky early stages saw a number of incidents, including collisions and retirements. Yannick Bestaven’s winning Vendée Globe IMOCA, Maitre Coq IV, had to retire very early following a collision with another vessel that caused damage to the IMOCA 60 bow.

The Maserati Multi 70 skippered by Giovanni Soldini was also forced to retire due to damage at around 1830 pm.

Soldini said: “We were sailing at 20-25 knots when the winch drum exploded. We had just replaced it, it was new, it probably had some structural damage.” 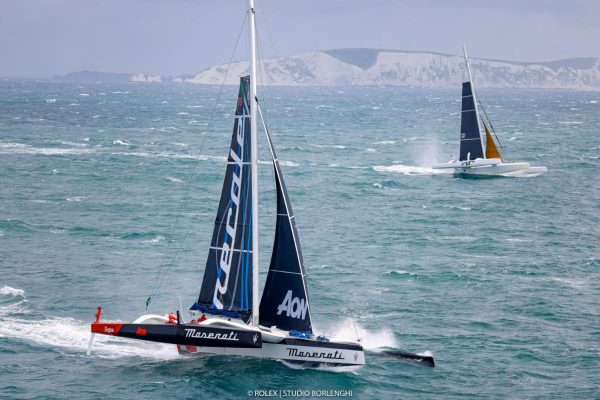 Other race favourites to get knocked out early in the race were two serious MOCRA contenders: Christian Guyader, the 2019 winner, on his highly fancied TS5 catamaran Guyader Mext, and Yann Marilley’s Outremer 5x Racing catamaran No Limit, racing with ocean sailing legend Loick Peyron, which had to retire after dismasting.

Given the boisterous forecast, the race officers had decided to reorder the classes for the Fastnet Race start, sending the two multihull divisions – MOCRA and Open, which includes the four giant Ultims – off first, followed by the IMOCA 60s and Class 40s together, then IRC Zero, IRC 1 and Figaro 2, then IRC 4, IRC 3 and IRC 2.

This was a reschedule from the previous plan of starting the IRC Zero fleet last, creating the famous Fastnet Race start spectacle of fleets mixing it up, amateurs and family crews racing alongside the largest, professional teams.

Organisers decided that with today’s conditions it was prudent to allow the less manoeuvrable maxi yachts, which includes the biggest yacht ever to compete in the Rolex Fastnet Race, the 140ft ClubSwan 125 Skorpios, through the Narrows first. 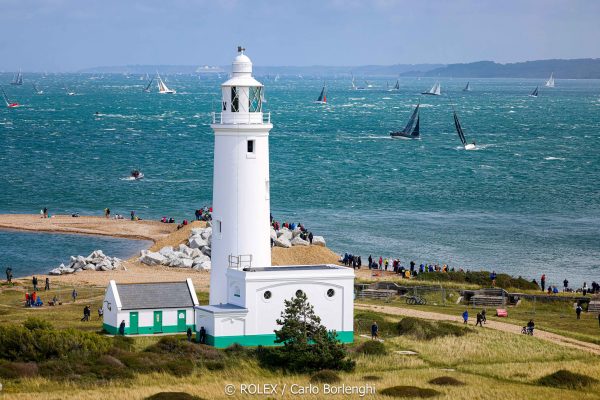 Almost all fleets initially started without incident. With tide taking the fleet down to the line, and a lumpen sea state, most fleets were conservative and started cleanly. 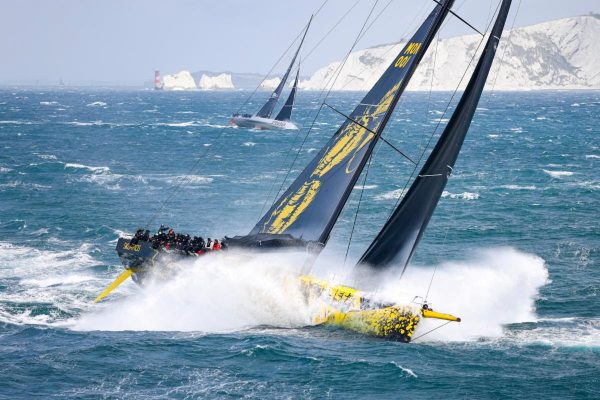 However, with such challenging conditions and a crowded racing area off the start there were numerous incidents as the fleet tacked out to the western Solent, including collisions, torn sails, forestay failures and three dismastings in the very early stages.

By early evening Cowes Yacht Haven was dotted with boats flying Rolex race flags who had opted to return, and 39 boats and retired from racing.

In IRC 2 Gilles Fournier  and Corinne Migraine’s J/133 Pintia was among the retirees, while Ed Bell’s JPK 11.80 Dawn Treader was forced out with a broken mast.
In IRC 1, one of the Rolex Fastnet Race’s most regular competitors, the Goubau family from Belgium, were also forced to pull out on their First 47.7 Moana.
The competitive IRC Two Handed fleet has also seen some experienced competitors retire early, including 2015 winners Kelvin Rawlings and Stuart Childerley on the Sun Fast 3300 Aries, and British favourites Rob Craigie and Deb Fish on board the Sun Fast 3600 Bellino. 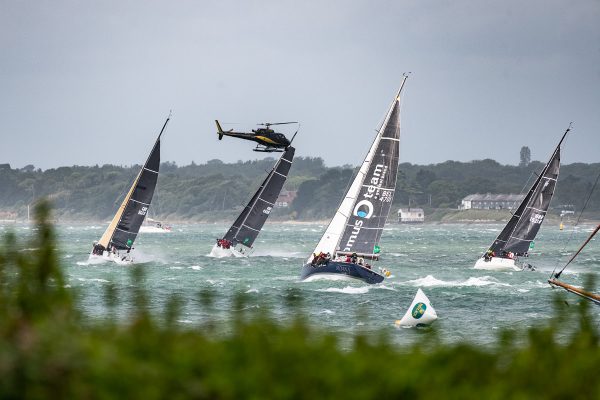 The forecast for the first 24 hours of this year’s Rolex Fastnet Race is going to continue to make for a tough first night for competitors.

For Sunday night competitors can expect strong winds of 23-28 knots in the English Channel, with acceleration zones around the headlands are likely to increase that to 30 knots. With wind against tide this evening, a short and steep sea state is expected around St Alban’s Ledge and Portland Race.

Winds are forecast to ease by Monday morning as competitors make miles to the west, but only expected to initially abate to 18-23 knots, dropping off further by Tuesday. 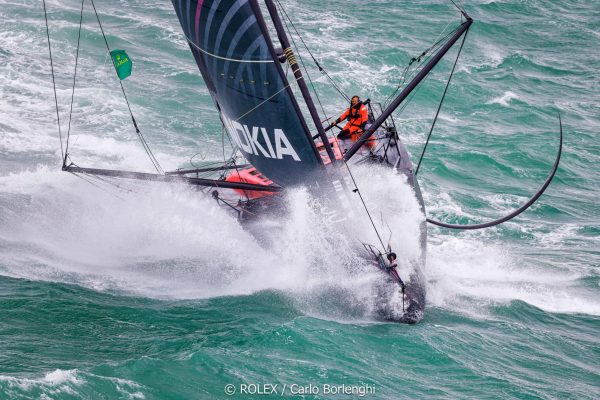 As competitors enter the Irish Sea, the wind is expected to back, then veer to the west around the Fastnet Rock. However, by Wednesday there will be a slow moving area of low pressure system west of Ireland, which is creating some uncertainty about where, and how quickly, the fronts will move and which portion of the fleet can anticipate southerly or westerly breezes after rounding the Rock.

The leaders heading to Cherbourg can expect light winds off Brittany, but by Thursday south-westerly winds are expected to blanket the race course, building into Friday.

So far, it is too early to call whether the 49th  Rolex Fastnet Race will be a big boats’ race, or if the small boats will have a later advantage.