Every cruiser is familiar with that tingle of doubt: is my chart really up to date, and is that shallow bank still in that location? Careful ‘eyeball’ navigation in tropical waters has become a lot easier thanks to satellite overlays on digital charts, and for those sailing off the beaten track there are simple tools to make your own overlays.

Of course shipping routes for commercial traffic are well charted; as a necessity they have been surveyed for well over a 100 years. But those little nooks and crannies where we love to sail or anchor? In popular cruising areas like the Mediterranean or the Caribbean, chances are that your digital and/or paper charts will be a great help in reaching those spots safely, because of the yachting and/or commercial traffic there.

But when visiting more remote spots you may notice that regular charts for chartplotters differ in accuracy per region. One supplier is often best in one area, but another might excel in another. Plotter brands are increasingly linked to a fixed supplier of charts, so in some sailing waters you may lack the accuracy you’re looking for. In other areas there are no recent surveys at all.

This is where satellite imagery comes in handy. If the nautical charts of an area are old or of dubious quality, a satellite image will be much more recent. If you look on, for instance, Google Earth, you can check if there have been any changes in the location of sand spits, harbour layout or channels.

This is very helpful if you have a good internet connection. But offline things are different. And, of course, it is very handy if you can see your boat on screen while moving on the satellite picture, so you know exactly where that coral head is or where the shallower bits are. 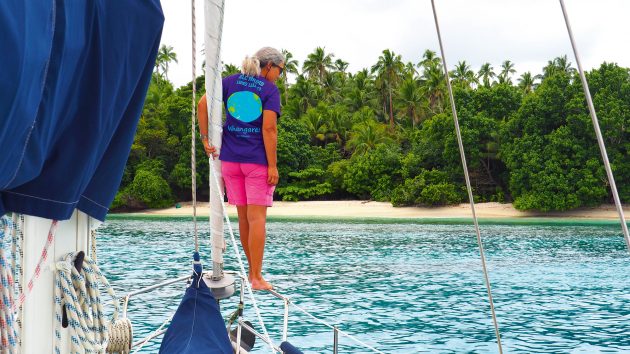 Some chart formats like Navionics Platinum+ and C-MAP Reveal have satellite photos selectable as an optional layer; you still have the information you normally get on a chart, but you can compare it with the reality on the satellite image. This does require a multifunctional display that supports this and the applicable charting card. These may be hard to get in your location, and of course they cost money.

That’s where the open source (almost) free chart software comes in handy. They’re very popular with cruisers because these sources of information can be used for passage planning and visiting ‘off the beaten track’ locations where a pair of eyes from the sky are essential.

The two most popular are OpenCPN and Guru Maps. OpenCPN is open source chart plotting software in which you can load digital charts from various free and paid sources; it runs on Linux, MacOS and Microsoft Windows computers. There is a paid Android derivative for tablets and phones. Guru Maps is an app that can be downloaded on a tablet or phone.

When you’ve downloaded the charting software, the next step is to get the geo-referenced satellite images so you can import them into your charting application. This sounds like a daunting task but, fortunately, there is lots of help available on the internet.

There are various sources for satellite images: Google Earth, Bing and ArcGIS to name just a few. You’ll need various sources, because the specific anchorage or island you want might have been hiding under a cloud when the Google Earth satellite passed over. Another source may have a better image of the same area. One very helpful tool is SAS.Planet: a program designed for viewing and downloading high-resolution satellite imagery. All downloaded images will remain on your computer and you’ll be able to view them offline.

The keyword here is ‘tiles’. As you scroll along the satellite images of the area that you want to explore, you need to make ‘tiles’, ie clips of a satellite image. These are stored as MBTiles if you use a program like SAS.Planet. Depending on whether you have nautical charts of the area it may be useful to also prepare tiles at various zoom levels. 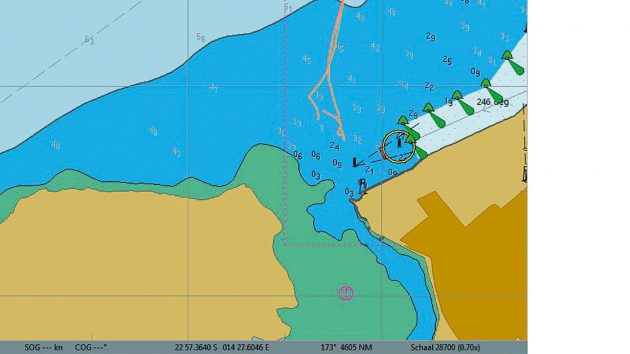 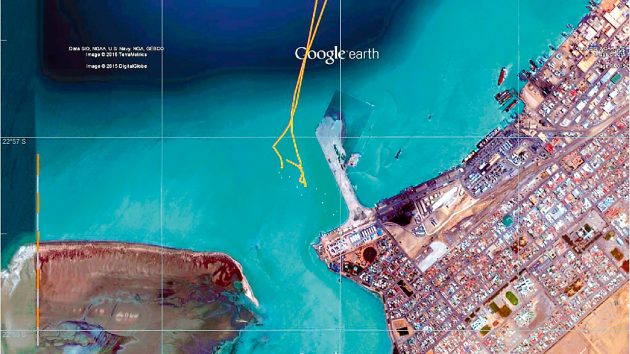 The next step is to import these MBTiles into your charting application. The software generally shows the ‘best’ chart for your current zoom level. If you only prepare satellite tiles that are very detailed, when you are zoomed out you’ll not see those – the system will show either the worldwide background map or, if you have those, the nautical chart that you have installed for that area. Once you zoom into the area that one or more of your tiles covers, the charting software can automatically switch to the more detailed satellite photo tile, showing the coral heads and sand spits you need to avoid.

This sounds like a lot of work – and it is. If you’re going well off the beaten track and need detailed information, you’re in for hours of careful scrolling, selecting and downloading to make the tiles.

Internet access and time to prepare is paramount for a successful use of these tools. But once again, some helpful cruisers have made tiles of favoured anchorages already and have stored them in libraries that you can access online. So, before you start making tiles yourself, it pays to look around the internet to see what you can find that is downloadable.

Even better, your fellow cruiser in the anchorage might have what you need – a splendid opportunity to go over and share a cup of tea.

“In some of the areas we cruise (the Philippines and Indonesia, specifically), the available charts, even just-updated Navionics and C-Map charts, can be off by as much as a half a mile. It’s pretty astonishing to see your boat navigating across an island, using your expensive chart plotter.

“In some places, these charts are only off 100ft, but that’s enough to put you on the reef.” 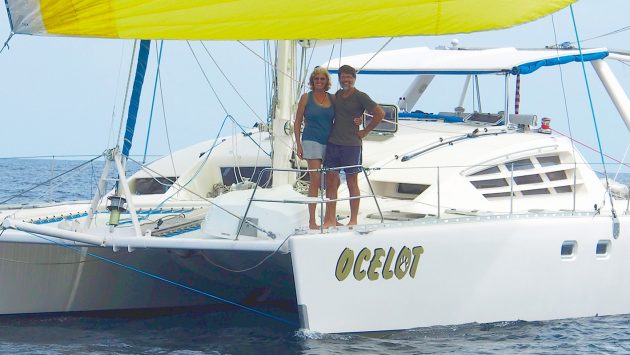 Sue and John Hacking on Ocelot

We’ve had a similar experience. My partner Wietze van der Laan and I have recently returned from an eight-year circumnavigation on our 44ft Bruce Roberts design, Anna Caroline. Wietze recalls: “We’ve always used a combination of Open CPN and paper charts. In very remote locations like Patagonia, we found that both types of charts were sometimes off by well over a mile.”

The help of satellite imagery (as well as good old eyeball navigation) is invaluable to navigate these waters safely. More than once we’ve been anchored on land on our digital charts, while the satellite image showed us snug in a beautiful little bay near the face of a glacier.

Even in areas where the charts are fundamentally accurate, additional satellite data can be invaluable, says Sherry McCampbell: “We have found that the satellite charts add so much to our ability to find off-the-beaten-path anchorages. Where the Navionics chart shows a large shallow area (interpreted as ‘you can’t go here’), a satellite chart may well reveal a small channel into an area that has a perfectly good anchorage for a boat with a draught under 3m.

“It does take some experience to be able to ‘read’ the colours in a satellite chart and interpret the colours: is it too deep, too shallow? Is there good sand, or maybe a coral head to avoid? But once you learn these skills, it totally expands your possible anchorages.

“We are currently in south-east Indonesia – very few cruising boats travel in this area. I was just today making new satellite charts for our next month of cruising, using Sat2Chart and SAS.Planet. It’s amazing what you can see from the satellite charts: where small villages are (possibilities for small markets to buy fresh vegetables, etc), where ‘sand fans’ are that indicate a viable anchorage, where passage is possible into an inner reef area, where fishing boats are anchored. And for on shore exploration, beaches, mountains, waterfalls etc.” 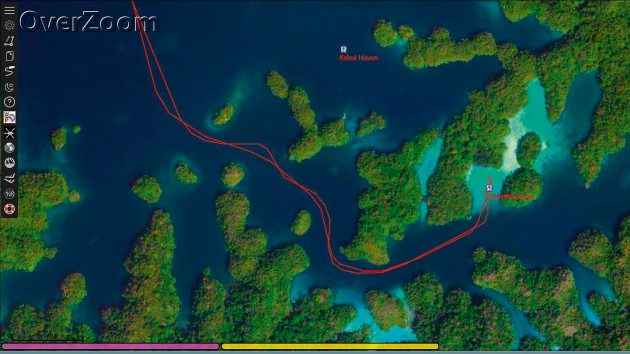 Jon Hacking is cruising aboard SV Ocelot, a Wauquiez-designed 48ft catamaran. He says: “The possibilities of using MBTiles for exploring islands and anchorages are endless. It pays to invest time in getting to know the online tools and how-to-guides that are available. 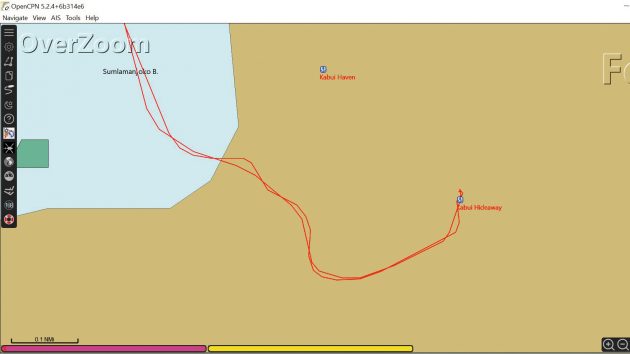 “The only limit is the size of your hard drive. It pays to choose well where you store your MBTiles, because over the years of cruising, it can add up quickly. If you upload too many MBTiles in your OpenCPN, the performance of your laptop will decrease.”

He adds a word of caution: “These open-source systems develop all the time, so some functionalities will appear or disappear. Make sure that you check if everything is still working before you set off.”

His experiences are echoed by Thom D’Arcy, who sailed his Vancouver 28 Fathom solo around the world. “On my circumnavigation I found the georeferenced satellite imagery extremely useful for backing up my digital and paper charts. In some poorly charted areas such as Fiji and Madagascar I even used satellite images as my primary means of navigation. These images are also very useful for researching anchorages and layouts of ports and harbours before arrival.”

However, he too notes: “The applications for accessing the satellite images are constantly changing and the app I used until recently is no longer available. It therefore requires a vigilant eye on the developments in this field to be able to access the right information when needed.”