The 2020/21 Vendée Globe finish goes to the wire: Dalin first to cross the line with several boats still in with a chance of taking the title overnight, but Herrmann out of contention after crashing into a fishing boat in the final hours

There is no such thing as an ‘easy’ Vendée Globe. It is, rightly, considered to be one of the very toughest sporting challenges in the world, and the 2020/2021 edition of the Vendée has been no exception.

But whilst a clear home run can never be taken for granted in the Vendée Globe, never has there been a finish quite like this one. For much of the final day of racing, no fewer than five skippers were still in the running for victory, with Charlie Dalin on Apivia, Boris Herrmann on Seaexplorer – Yacht Club De Monaco, Louis Burton on Bureau Vallée 2, Thomas Ruyant on LinkedOut and Yannick Bestaven Maitre Coq IV all within touching distance of the greatest prize in ocean sailing: to be named the Vendée Globe winner. 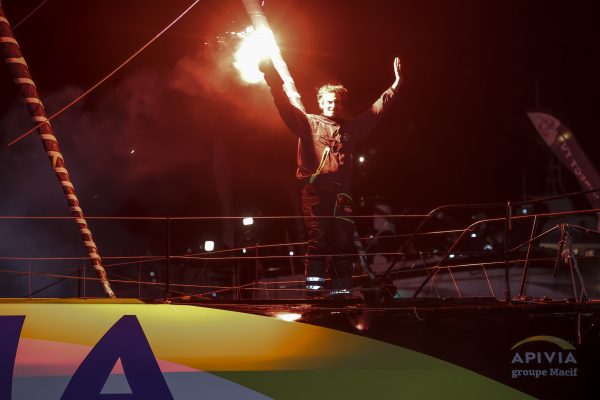 After 80 days of racing, the solo around the world race came down to the type of margin you might expect in a coastal race: with just a couple of hours between the top three. Having variously thrashed and nursed their boats – and themselves – around 24,000 miles of the most remote oceans in the world, the 2020/21 Vendée Globe finished with all the intensity of a Figaro stage where podium places could be decided by a single shift.

And so it was fitting that the first boat across the line was Figaro graduate Charlie Dalin on Apivia, who finished in 8d 6h 15m. Dalin, 36, has raced a masterful first Vendée Globe, leading for 37 days in total. He has kept his new Verdier-designed Apivia right on the red line, balancing his Figaro-style intensity of racing with just enough caution to keep the distinctive yellow and black boat on its feet despite damage to the port foil back in mid- December.

Even the Vendée Globe’s expert meteorologist, Christian Dumard, was reluctant to call which boat would be in the top three places this morning, so tight were the margins with a single layline or gybe likely to determine the distance. Dalin took a southerly route through Biscay, sailing waters that will be familiar to him from his Figaro career whilst also trying to maximise time on his favoured port gybe. He crossed the line shortly after 1940 on Wednesday night, only then coming out of his protected cockpit to celebrate.

Previous Vendée Globe winners are usually able to relish their final approach to the French Atlantic town of Les Sables d’Olonne, coming on deck to wave to an appreciative on the water spectator fleet. Not so Dalin, for whom every minute of racing counted. He might have had the finish line in his sights, but Dalin has been racing against the clock since December 16. Despite being the first boat to cross the line, he had no guarantee that he would become the eventual winner of the race. (article continues below)

You can follow the final hours of the race via the event tracker.

On November 20, Kevin Escoffier’s PRB suddenly and catastrophically broke up. The bow of PRB sheared off as Escoffier surfed a large wave, the boat snapping in two and sinking within seconds. Escoffier was left drifting 850 miles south-west of Cape Town in a liferaft and survival suit, without his sat phone or VHF. 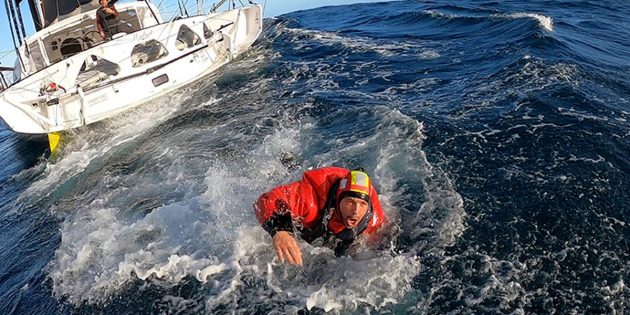 Unusually for that stage of the Vendée Globe, there were several skippers within close range of PRB’s position, and four were requested to suspend racing and divert to assist the search and rescue operation. Escoffier was thankfully picked up by veteran Vendée sailor, Jean Le Cam, after around 11 hours.

The four sailors who were involved – including Boris Herrman, Yannick Bestaven, Jean Le Cam and Sebastien Simon (who later retired) were awarded redress by the jury on December 16 for the time and extra miles they lost during the search. Critically, Herrmann was awarded 6 hours, Bestaven 10h 15m, and Le Cam 16h 15. As soon as Dalin crossed the finish line, a new stopwatch started to see if Bestaven or Herrman could overtake him by their time advantage.

Crash in the night

However, events took a radical turn just before 2000hrs when news came in that Boris Herrmann, who was in 3rd place and still well within his six-hour margin to overtake Dalin, had collided with a fishing boat some 90 miles from the Vendée Globe finish.

Herrmann was unhurt, but reported damage to the starboard foil. His boat speeds on SeaExplorer-Yacht Club de Monaco plummeted from high teens to just 7 knots, and although he continued sailing to Les Sables the chances to become the first non-French winner of the Vendée Globe was ebbing away.

The second skipper home was Louis Burton, who finished four hours after Dalin in 80d 10h 25m. Burton’s Bureau Vallée 2 was the winner of the previous Vendée Globe, Armel Le Cleac’h’s Banque Populaire VIII. Burton’s team bought the boat before it had even reached home in 2017, giving the 35-year-old skipper a full four year preparation for his third Vendée attempt. 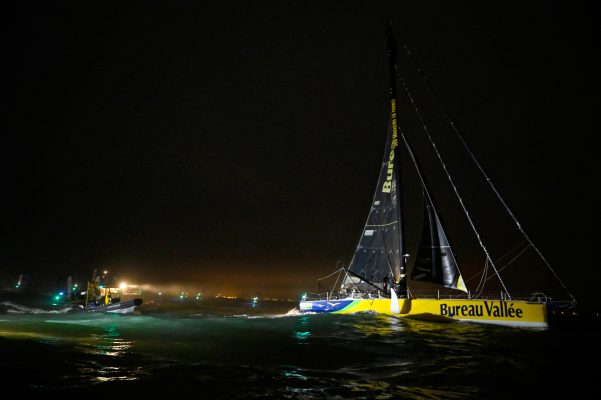 Despite being of a previous generation design, Bureau Vallée 2 has demonstrated lightning speed at times during the race, Burton pushing hard to make up 650 miles to catch the leaders in the Atlantic. However, he has picked up no fewer than three time penalties over the course of the race, including one for being OCS at the start, and battled a series of repairs, at one stage even pulling into the lee of the remote Macquarie Island in the south-west Pacific to fix his mast track.

All eyes now turn to Yannick Bestaven, who is steaming into Les Sables at 18-20 knots in 4th place with a 10-hour time advantage due to the redress. His is now the best chance of snatching victory from Dalin at the Vendée Globe finish. Bestaven must finish before 0550 (UTC) on Thursday 28 January in order to take the win.